Well I guess I will try to finish up the workbench odyssey here. It has been a fun and moderately cathartic experience spilling it out step by step here on the net. Its good practice because someday I'm hoping to be able to write a few articles for a wood working magazine or two, I've got some ideas...no I'm not gonna share that, but we'll see.

So I had the basic build down, it was time to dress up what was left and build the leg vice for the bench. I used a circle saw to chop off and even the ends of the bench top, I removed 1-1/2 " total, adjusting to shave off defects and misses in the wood, it ended up being a 1/2" from once side and an 1" from the other, I finished the cut smooth all the way with a back saw 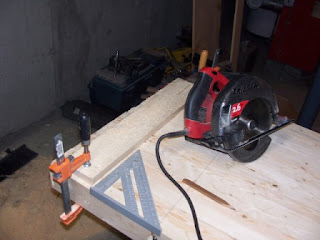 Now I took some nicer 1 by pine, 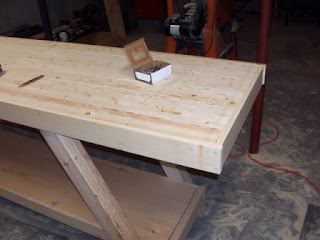 like I had bought for the shelves, ripped them to the thickness of the bench top and wrapped them around the edges. At first I was considering dovetailing the corners as well, and now in retrospect I believe I would have liked that better but my consideration was the length of the 8' boards and trying to hand cut pins into them and make them neat and tight. Like I said, in retrospect I wish I had given it a try, but I wimped out and went for butt joints.

I glued and nailed the boards around the bench top with 8d finishing nails, and eased all the edges into a slight round-over with my 2" block plane. 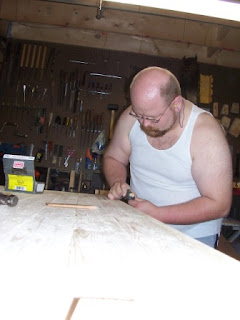 I also the cut out the face board to match the dug out I made to accept the end vise. 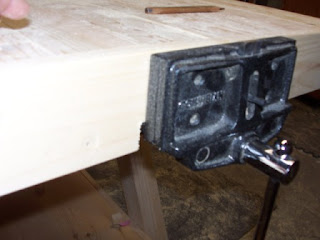 I then made a face board for the leg the leg vice was to oppose. This would bring the leg up level with the wrapped edge and help the vice work better. I glued and nailed this piece after I marked and cut the mortise in it for the rail that keeps the lower end of the leg vise in alignment.

I took a 2x10 piece of pine, measured out the angles of the bench and cut the leg vise from that, 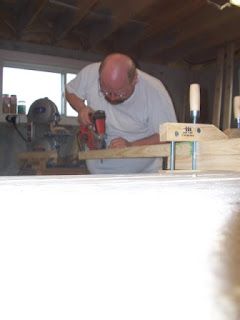 I agonized over getting the shape just right, I must have measured and sketched it out on the board a half a dozen times before I liked what I had. I used a jig saw to free the vise from the surrounding wood and a hand held belt sander to soften up and bring it to the lines. 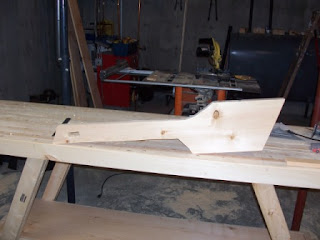 I had a large vise screw that I cannibalized 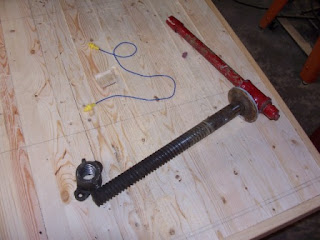 from an older bench. The bench came with in the move but it did not survive very well. I had to cut off a leg and repair it to get it down into the basement. 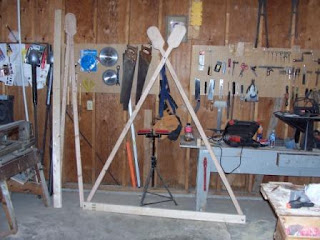 but that was after it sat outside for most of a Maine winter, It's got its place but it was never a great bench to work on to start with. It has commonly been referred to by me as my tool bench, because it typically sits under where I hand my peg board and tools, It lives as a staging area for pieces of a project I'm not working on at the moment, for tools that I am done with at the bench but have not put away yet. for the pages of plans I am referring to for the project, or for anything else. The leg vise was a nice feature on this bench and it did see use a plenty, but I always wanted it attached to my real bench, my work bench. and now it is.

The tool bench is probably what you would call an antique in its own right. I received it from my father in law when we bought their house from them in 2000, They were moving into a trailer house and the attached garage didn't have room for more than one bench. however it was not his bench to start with...it was in the basement when they moved in in the early 80's and he took to using it himself, who knows how old it was when he got it, They bought the house from the obligatory little old lady, who had lived on her own for several decades, If I had to guess based on some clues I found remodeling the house. I would say the bench survived from the 1940's or 50's...

it took a bit of elbow grease to get the leg screw off the tool bench, (in the end I had to saw off screw heads with a hacksaw) but persistence paid off and I was rewarded with an excellent 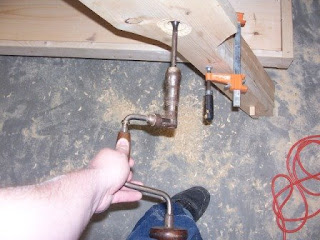 mechanism. I clamped the finished vice face against the leg it would oppose so I could drill the screw hole through the whole thickness at once, This way I could be sure of alignment. The only bit I had that was large enough and long enough to drill the necessary hole for the screw, only fit into my brace, so after starting the hole with a forstner bit in my cordless drill, I worked up a sweat with the brace. I have to say it was pretty enjoyable though, I will have to look for excuses to use the brace more in the future.

The reason I did not measure and drill all the pieces seperately (the leg, the face board, 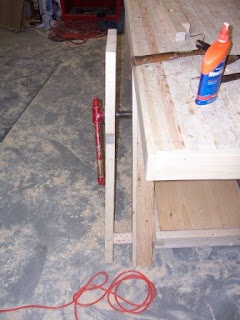 the vise board) was I was not entirely sure where I wanted the screw located until after I had everything assembled and clamped up. The nex part was assembling the vice, a couple of screws mounted and attached the bench screw, but I had a little more thought when it came to the runner board that keeps the alignment and allows the vise a little leeway to adjust to the piece it is clamping, Instead of gluing it in solid, I 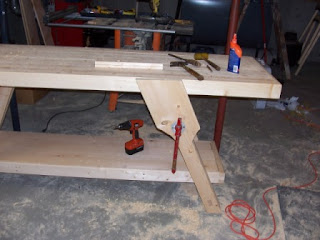 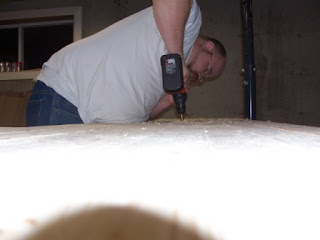 positioned the runner and drove in a single 10d finishing nail throught the vise and the runner board. This acts like a pin hinge, creating some flexibility in the construct.

Now there is only three tasks left, #1, drilling the holes for the bench dogs, (taking care to lay them out to miss the threated rods running through the bench, and the legs of the bench.) 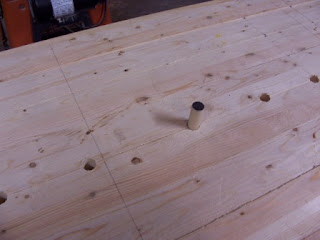 #2, Giving the benchtop a once over to make it as flat as possible, I chose to sand it with a belt 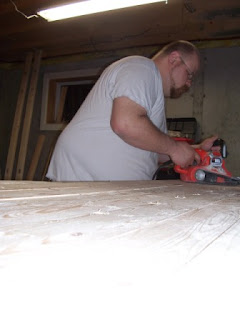 sander as my surfacing plane causes a lot of tear out in pine,

And #3, a quick finish with a coat of natural, danish oil. I pondered giving the bench no finish at all, after all it's only a bench, but the washer and dryer live down in the basement as well, and the dryer can cause some fluctuations in the humidity of my shop, so I wanted to give some protection to the wood because of this. 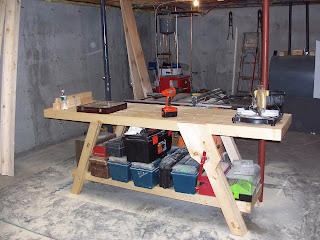