What I Did on my Summer Vacation

As my post before explained, I often take a few weeks off in the beginning of August for some vacation time with family and friends. In the past I have prepared by writing up several posts ahead of time so I can just pop on and post them when I get a chance. This year that just wasn't in the cards so it appears that I have been quiet for a while.

I have not been quiet, I have in fact been busy. The first two weeks of August are the busiest time of year for my hobby Viking Age Reenactment (I guess I cannot classify woodworking as a hobby in my life any longer, words like addiction or passion would probably serve better) We have a big show up in Ishpeming Michigan for a renaissance faire on the first weekend in August and our annual Midsummer Feast and Tournament the second weekend.

Now there was some woodworking involved in both weekends. When we set up our encampment at a faire I bring along my portable joinery bench and set up doing some woodcarving demonstrations for those interested. I love doing this because other woodworkers I have never met before stop, look, and then begin to talk sawdust with me. 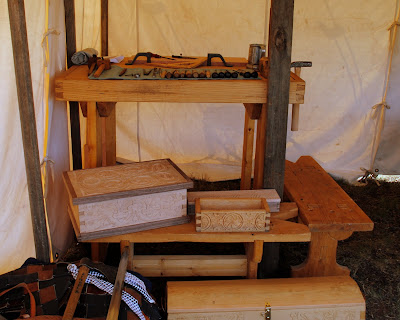 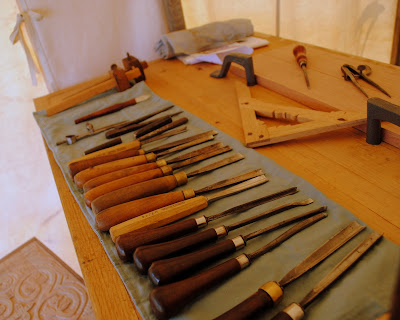 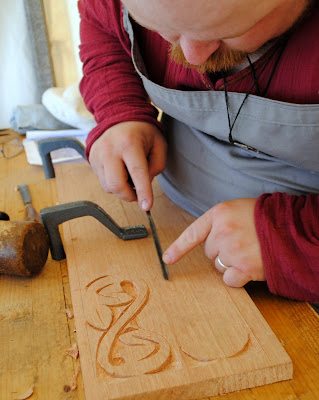 I also got the chance to visit with an old piece of mine that I traded to a bladesmith friend for a nice dagger. the chest was actually one of my first successes at dovetailing. They use it to carry the stuff they need for rustic cooking, and his wife is an amazing cook! 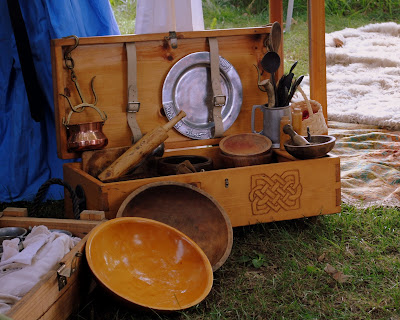 But that isn't all we do at faires, we also perform a show where we talk about how weapons were used in medieval combat, we show several examples, and then we use padded versions of those weapons and do actual combat. No choreography, no stage combat tricks like telegraphing, no pulled punches, we go for it and go hard. 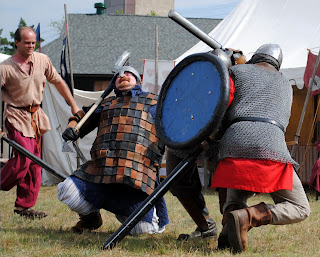 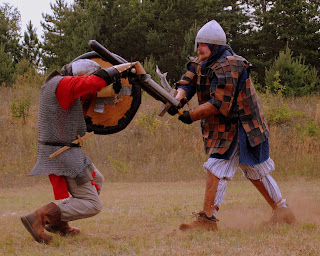 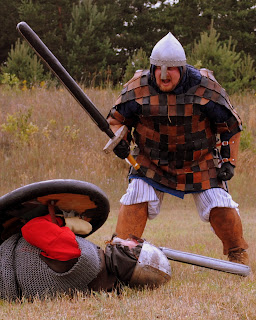 This is the first combat I've participated in for over a year, since I hurt my knee doing this last June. As you can tell from the last picture, it feels good to get back in the "swing" of it.

The next weekend was the feast and tournament. I did a short presentation on carving techniques for the members in attendance. 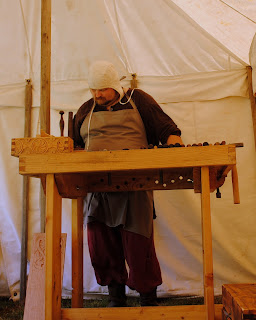 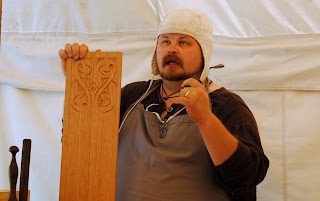 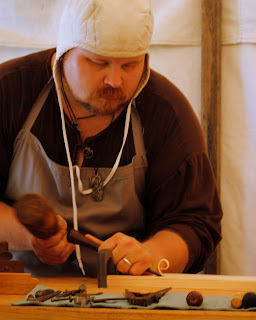 After my presentation and ones from our blacksmith, bow maker, and a herbalist. We started the martial games.
After all that I admit it took a week or so of resting up and healing from the bumps and bruises of two weekends in a row of combat, but now I'm feeling much more like myself and I'm ready to hit the shop and the blog, batteries recharged and ready to go.

In fact I just put in an order at my hardwood dealer Big River Lumber Company for 60 board feet of 5/4 poplar. I'm starting work on a traditional tool chest in an Anarchist style. So from here on we'll finish up talking about my build of Chuck Bender's William and Mary Book Stand, and we'll talk about my finishing of a carved box. After that we'll follow up on my build of an anarchist's tool chest and some of my own individualist ideas I intend to include. (Nothing really too far off the map though) Until then. . .

If you are interested in seeing more info on my Viking Age Reenactment Group you can visit our website www.tribewodenthor.org

If you like what you see and maybe want to see more pictures of the events The Tribe has a Facebook page as well. you can check that out HERE. Become our "friend" and stay up to date with what we're doing and where we're going.
Email Post