Too much time to ponder lately.

I received an order for another Wine Ceremony Box yesterday. For not really promoting them beyond the blog I'd say I'm doing pretty well. I have some thoughts to expand on the idea but those will have to wait for a while. The real point is the order sent me cruising around the photo area on my laptop. I have a folder with a large selection of pictures of 17th Century carvings pilfered from the internet for reference and inspiration.

While looking at photos I strayed into different folders of collected inspiration and eventually into photos of some of my older work. I found a piece, a chair, that I built many years ago. I get to see it often because I gave it to a good friend of mine, but I haven't thought about it in quite a while.

I remember being inspired by a chair I saw in the movie "The Illusionist" as Edward Norton's character performed on stage. As I remember it had a narrow ladder across the back and a wider front. At the time I assumed it was shaped like that to allow someone with a sword hanging from their belt an easier time sitting without obstruction. (This is something I have some experience with)

The ladder back of the chair appealed to me as I had a number of 3/4" X 3/4" red oak off cuts in the shop and I saw this as a good way to use them. I drew several plans up on paper, meticulously worked out the joinery and details, and jumped in head first in only the way the naive can. In the end I finished the chair and a small side table to accompany it and was pretty happy with the results. Sometimes luck favors the naive. 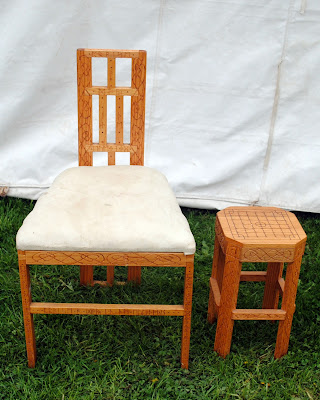 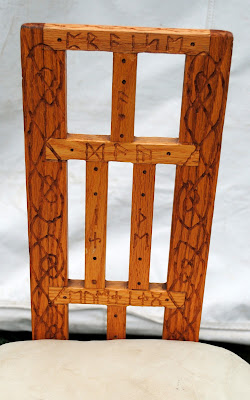 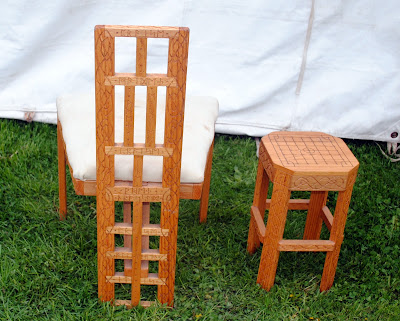 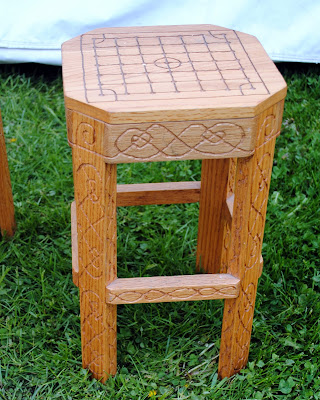 This was one of my first forays into carving as well. I had done some but this was a lot as I covered all the surfaces in knotwork and runes. I did the carving with a Dremel tool and various bits. The padded seat is doe hide. The runes spell out a verse from the Norse Poetic Edda, "The Havamal." Verse 81 reads:


Praise the day in the evening,
Praise a wife when she dies,
Praise a sword when it cuts,
Praise a maiden at her wedding
Praise ice when it is crossed
Praise ale when it is drunk
There are differences in how it reads based on different translations but in the end I started calling it "The Thanksgiving Chair"

Now this piece, the good and the bad kind of amazes me, because in the following seven or eight years I have done a lot of learning. A lot of that education has taught me well made chairs are difficult things to make. Over time, the thought of chairs has become an intimidating thing to me. I admire the guys out there that build great looking chairs, it really is almost an art form unto itself within woodworking. Much like turning. I'm not done exploring other forms and readying myself to jump into trying my hand at Windsors just yet, but I am ready to stick my big toe into the water.

I've got a four foot section of a black walnut log sitting on the ground outside my shop and it has a destiny. I have a book written by Peter Follansbee and it's going to play a big part in that destiny. I have several things on my plate I want to accomplish this year but I'm going to try and push this project into the scene. 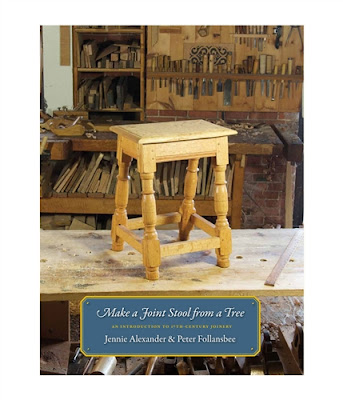 If you don't own it, do yourself a favor and bounce over to Lost Art Press and pick up a copy of "Make a Joint Stool From a Tree." You'll be glad you did.
Email Post
Labels: Older Work Thoughts and Observations