My Take On Starting To Carve Part Three

This is a continued expression of some of my thoughts and feelings about carving and getting started. I'll give a warning that your own individual mileage may vary based on where you come from and what you want to accomplish. If you're just arriving to the conversation feel free to catch up on the previous posts in this vein. Part one can be found HERE and part 2 is HERE. This post tends to feel a bit more opinionated so consider yourself warned.

Inspiration, or What Do I Carve?

Inspiration is a precious metal that can sometimes be difficult to pan for. When looking to begin designing a worthwhile piece of furniture, then inspiration can be difficult enough. If you are looking to add a carved element to that piece then you up the ante a bit.

If you are working on a straight up reproduction piece then by all means follow the details of the original as close as possible. If instead you are headed out into the no man's land of creativity then you have to play by a different set of rules. Lately I've been building a series of carved boxes, mostly to hold a bottle or two of wine. I would call the carvings I've done for them inspired by 17th century techniques and patterns, but I haven't tried to make anything a precise, or even semi precise reproduction. 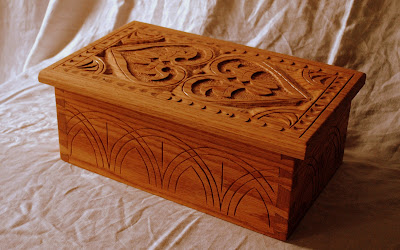 So how do I come up with what I'm going to carve. To be honest, when I step up to the bench, chisel in hand, I have a somewhat vague idea of where I'm starting and where I'm going. Once the chisel hits wood though, all bets are off. A mistake may lead me down another path different from where I intended. The carving begins to take on a life and mind of it's own with each previous step dictating the next.

It may sound strange, in fact I'm positive it sounds weird as hell, it's even strange to try and write about. I chalk a lot of it up to my art background. In a past life, teenage years to young twenties, I was certain I was going to be a fine artist. I took all the art instruction I could find, including college level seminars. Given anything resembling real ambition at that age I would have continued on to college at an "Art School" (The Fine Arts Program at UW-Madison was my dream) The moral of the story is I spent a lot of time and energy training my eyes to see and my hands to work on whatever paper or canvas was in front of me. The other thing I learned to do was relax and trust my eyes and my instincts, and know that sometimes a work turns out and sometimes it's trash. You just keep moving forward either way.

Before slings and arrows are thrown let me say I understand that this process might not work for everyone right away. I certainly believe anyone can learn to work this way to some extent, and it's a good skill set to have. And don't believe for a second that these things happen without planning. There is a lot of thought and planning that goes into each piece I build and carve. Without the planing foundation the creativity cannot be built on top. 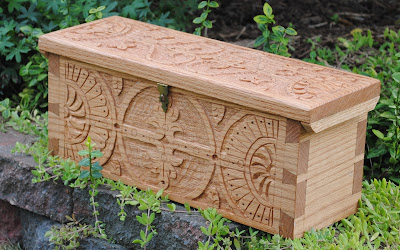 Above is a picture of my most recent carved box. I think I may best illustrate my process by walking you through the carving of the front panel.

All my work starts with my secret inspiration weapons. I have spent a decent amount of time snooping around local used book stores, both local and online, to pick up books with pictures of 17th Century furniture and their carvings. I also have a large file folder on my laptop with a couple hundred pictures of carvings and furniture. 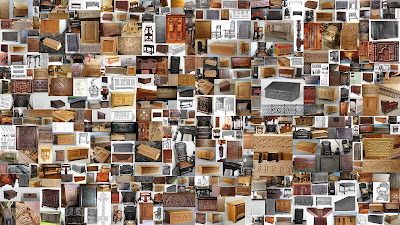 There's a lot of Peter Follansbee's work in the folder along with pictures from antique auction sites, museum pictures I've taken, and even the occasional eBay offering. I open the folder up and flip through looking for what I'm going to steal. I use the word steal but I almost never take a whole thing and steal wholesale. I find a bit I like, an idea or a flourish, and I add that to another idea I like, and through this process I start to build a plan in my mind.

Often I will print out between two and six images and bring them to my shop. I pin them to the cork board that hangs over my carving bench so I can reference them along the way. For this panel the main two I picked to work from looked like this. (You can see some notes scribbled in the margins.) 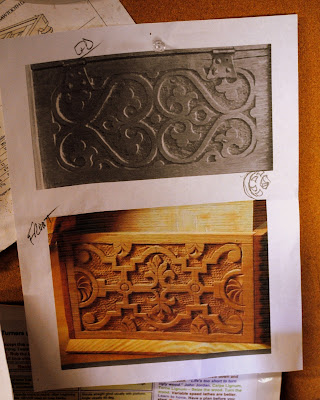 From here I started doing the layout for what I had in mind. 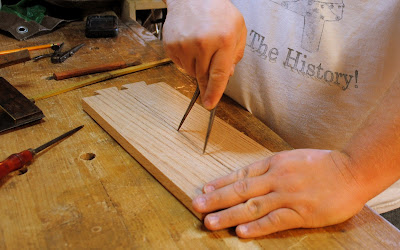 Using a dividers to layout a pattern is so very liberating. It allows me to both scale the work to the stock and build in the symmetry that is a big hallmark of this carving style. 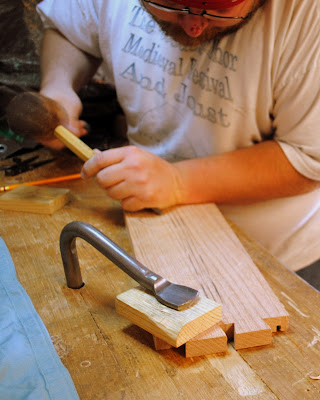 Then I started in with the "V" chisel to define the broad strokes of the landscape. Here's where things sometimes start to flow on their own. Originally I had intended the layout to be much closer to how the bottom picture looks, but I slipped and started carving away a line I shouldn't have. No worries, no starting over, no tears, I simply changed the design in my mind and moved forward though. This did lead to something interesting later. 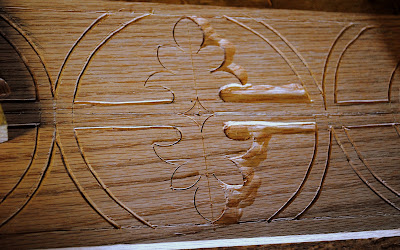 I also like how this technique allows you to punch out a design based on the chisels you have. If I were working off a pre-printed pattern stuck to my board with low tack stick-um spray I would worry and obsess over whether I had all the right chisels to make the right cuts. This technique saves me from entering that level of OCD.

After a little work I had most of the carving done, with one problem area. 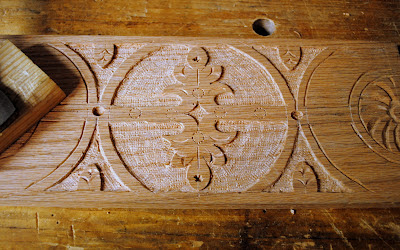 The arches between the central circle and the pinwheel medallions were there because of my miscue with the V chisel early on and I was now to the point I had to deal with them. I didn't want to fill them with a void, textured field. there needed to be some detail to break up the space more. Luckily my laptop had made the travel with me to the shop. I fired it up and opened my inspiration folder. I was looking for examples of how arches had been dealt with in period carvings.

I fell upon a picture of this box from the Chipstone Collection almost right away. 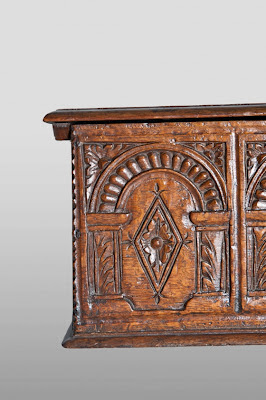 I looked deeper into the file, just to be thorough, but I kept coming back to this solution. I guess we had a winner. I selected a gouge sweep I thought would pull it off and stamped in the rounds at either end of the, I guess in the context of my carving, I'd call them petals. Then I used a V chisel to clean up in between. 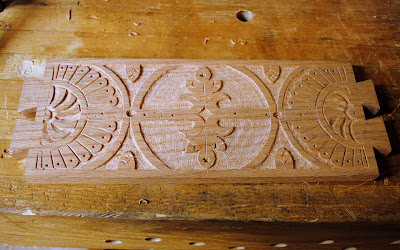 I was pretty proud of my solution. Sometimes we have to paint ourselves into corners in order to create the best solution to escape. I took a picture and threw it up on the social media sites while I was cleaning up for the night. I got some response back on Google + that some guys thought it looked a little Mayan. That made me stop and look again and in a way those gentlemen were right. At first all I was seeing was 17th Century because that's where all the inspiration was stolen from, but the big petaled flowers and the circles were reminiscent of that ancient Central American flavor. That's a very curious phenomenon to me.

I think I may just be out of things to say when it comes to how I go about carving. I hope somewhere in this you may have found a nugget you can steal for yourself. If I figure out something else to add, I'll open my trap some more. Keeping my mouth shut has never been what's gotten me in trouble. If there's ever any questions, or if I can help confuse you some more you can always shoot me an email at oldwolfworkshop@gmail.com