I have been feeling an embarrassment of riches this weekend.

For the last few weeks I've been spending my free time dipping into the new translation of "Roubo On Marquetry" and enjoying every page. I've found I cannot burn my way through it very quickly because the things I'm reading in there set my synapses alight and I have to digest the ideas before I move forward.

Then Friday I came home from work to find my copy of Joseph Moxon's "The Art Of Joinery" had arrived. So paging back and forth between both of these historic tomes is amazing. If I didn't know any better I'd say those jokers over at Lost Art Press planned it that way. 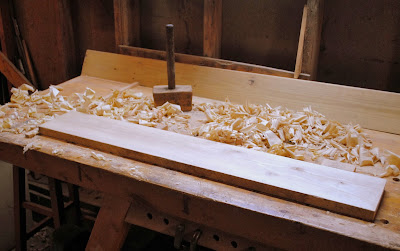 I've tried to read through some .pdf versions of "The Art of Joinery" and the accompanying works in the past and I have to admit, I'm not sure I took much away from it in the past, but after Chris Schwarz hammered on it a bit, cleaning up the text and offering his analysis, I'm enjoying it much more this go around and learning some interesting things too.

In Section 3 he spends ink talking about the differences in setting the depth of the plane iron for a wooden fore plane. Later in the text Chris writes about the order he planes down rough stock and that often he works from a heavy set fore plane to a fine set fore plane followed by a smoothing plane. In essence, the process uses two fore planes. 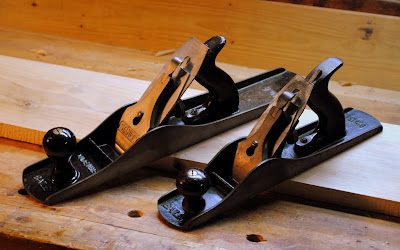 The "fore" plane is a more complex thing to the numbered system ushered in by Leonard Bailey and Stanley Tools. In place of the singular fore plane you have the number 5 Jack Plane of appropriate size and the number 6 Fore Plane of appropriate name. I use both of these planes regularly when bringing a stick of lumber down from rough to square and surfaced.

I use the number 5 with a heavily cambered blade to do the heavy lifting. I use it to traverse the board and knock down the high spots to cure wind and cup. Then I follow with my number 6, I have a lighter camber on the blade and I use it set fairly fine to finish out the flattening and erase the tracks left by the number 5. The final touches them come from a number 4 smoothing plane.

I've found success using that system and I've stuck with it. It's kind of fun to hear that backed up by both Moxon's and Chris's writing. 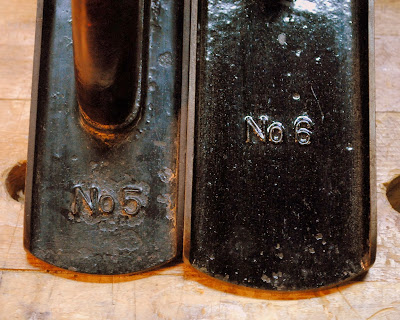 When I first started making the hand tool transition in my shop and began to put my toes into the vintage plane market I found a great resource in Patrick Leach's "Blood and Gore" resource. I had read through it a dozen times by the time I ran across my number 6 at a flea market and as I picked it up and turned it over in my hands Patrick's playful venom about how he dislikes this plane ran through my head. I put it down and almost walked away.

But the plane had already been cleaned up, restored, and the price was so cheep I'm embarrassed to repeat it. I picked it up and it brought it home and that plane has managed to touch nearly every project I've built since. I pride myself on keeping a modest tool collection. Just what I need to work, and maybe a little more. I could get along without the cursed number 6 but it does make things easier.

It really goes to prove one of the things I've come to love about woodworking. There are a ton of different ways to do every task and, provided they are safe, every single one of them is correct.