NOTE: This post is NOT directly about woodworking (per say) and sawdust posts have been few and far between here lately, but I did promise I would chronicle some of my work and research going into the process of writing my book and I've vowed to set everything else aside until I finish a rudimentary first draft.
A big part of that process is collecting and organizing the various sources and research from a scattering of ideas into something real. It's also about following up on leads that were too deep down the rabbit hole to chase the first time through. If you're only here for the sawdust - hold on, it will return. 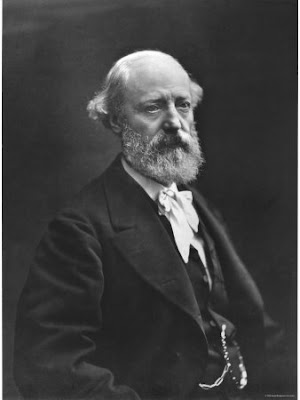 Eugene Viollet-le-Duc casts a long shadow over any research into medieval architecture and furniture. He was a French architect who lived between 1814 and 1879 who developed a fascination with medieval buildings and furnishings, going as far as to "renovate" or "rebuild" some medieval structures in the manner he believed correct. Wikipedia lists his attempts as combining "historical fact with creative modification."

Towards the end of his career he set to writing. Particularly of interest to my work is two tomes: "The Dictionary of French Architecture From the 11th to the 16th Centuries," and "The Dictionary of French Furnishings From The Carolingian Period To The Renaissance."  Every book I have referenced along my path, from Victor Chinnery, to Penelope Eames, to Eric Mercer and beyond sites Viollet-le-Duc's work extensively. In some instances this is the only source work available.

Unfortunately for me I am a failure of higher education and culture in that I am distinctly uni-lingual, (and barely so at that) and though the Architecture Dictionary has been translated and is available, the Furniture Dictionary is still stranded in French. This leaves the unsatisfying task of filtering the book through Google Translate followed further deciphering of what has passed through.

This morning I started work on the chapter on Beds.


The beds shown in the Morgan Bible are frustratingly without substance beyond their bulbous feet. Every one is heavily draped in textiles. When the bible denies me enough detail to work from I am forced to search for other credible and connected sources.

The first and best clue came from the stained glass windows of Chartres Cathedral. They were created in the same window of time as the Bible and you'll notice a similarity in style that has lead some to speculate the artisans who illustrated the Book were truly stained glass artisans who were "moonlighting."


Now I have some idea of what a headboard, footboard, and side rails might look like. Unsurprising it's similar to the construction of the chairs shown in the Bible. It still doesn't tell me anything about the suspension of the mattress. I had this image from "The Illustrated History Of Furniture" by Frederick Litchfield (1893) showing a "Saxon State Bed" 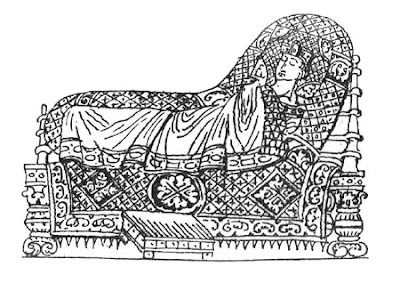 But the image seemed weird and out of context. It does show a rope suspension system for underneath the mattress, something I suspected to be, but was struggling for documentation on, but Litchfield doesn't give the source or location for the original image. How can I trust or work with it then?

This morning, working through Viollet-le-Duc's tome I same across this image ; The complete image! Obviously Litchfield had borrowed from Viollet-le-Duc in a way not all that unusual. Better yet Viollet mentions the source! I gleefully began to click around the internet, there are many archives of medieval manuscripts about and the trick is finding access to the right one through strong Google-Fu.

Unfortunately the manuscript itself was lost to history. In 1870, during the Franco-Prussian War, German bombs on the boarder town of Strasbourg destroyed the Municipal Library. The manuscript (and many other valuable historical treasures and documents) burned. All that remains are some of the images copied by those able to study it. You can find a taste in the Digitized Archives of the British Library.


The end of this is both happy and sad. I gathered enough circumstantial documentational evidence to move forward on a piece that's been difficult to figure out, and in the process I've learned about yet one more fantastic bit of knowledge removed from our consciousness through the useless aggression of mankind. We often talk about the cost of two World Wars in terms of cultural history but forget the shit did not start or end there.

Still, I am decidedly not a lament what's past kind of guy. Remember no matter where you go, there you are. but if we go here, then what. 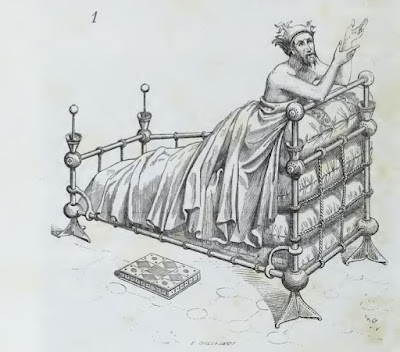 This is Viollet-le-Duc's illustration of a Carolingian Era (8th to 9th century) daybed taken from a manuscript and cleaned up for perspective by his artist. I'm having trouble deciphering the source, but I've seen representations with a side rail from this time before too, and this could be an answer as well. a bare bones frame held all around with ropes, and check out those far out corner brackets. . .