Stop And Smell The Shavings

And I'm probably better for it. 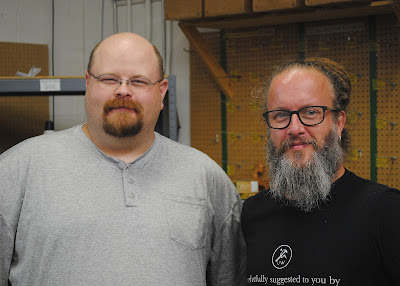 It has a lot to do with my good fortune. One of the premier woodworking events of the last few years was Sawlapalooza. The brain child of Mark Harrell of Bad Axe Tool Works and wood artisan/instructor Tom Fidgen where students not only built and filed their own Bad Axe saws but built a frame saw, kerfing plane and saw bench. I didn't get to make any sawdust, but I did get to hang around and photo-document the amazing week.

As a thank you, Mark handed me an extra precut lumber pack for Tom's sawbench. Pine instead of the fantastic quartersawn oak the students received. I took the bundle home. Moved it from one shop to another. Until last week. 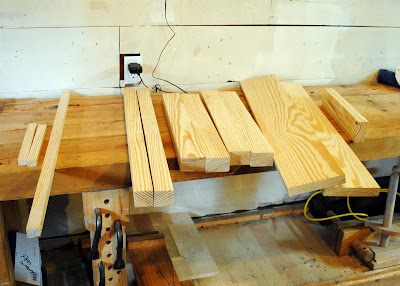 I had loaned my pair of saw benches to a friend. I still had projects to do and decided to put together the bundle into a version of Tom's. I was determined I could build it in a portion of a day using the least amount of tools possible.

Was I trying to show off how awesome I can be? Maybe a bit, ego is a bitch. But it's more innocent than it sounds on the surface. You have to understand, there is a certain trap you can fall into when you read a lot of old books about woodworking. The books were written by, and often for, professional woodworkers. Even when it's not obviously stated, efficiency and speed of production are highly valued traits. When you think it through it makes sense and it hasn't changed in this day and age.

Time is money. Efficiency is profit. Speed is important. When it's you're livelihood on the line it makes sense, and reading a lot of this can put the seed in your brain that efficiency is god.

I was about an hour in, finishing up the joinery cuts for the legs and cross members, when Tom Fidgen's voice gave me pause. 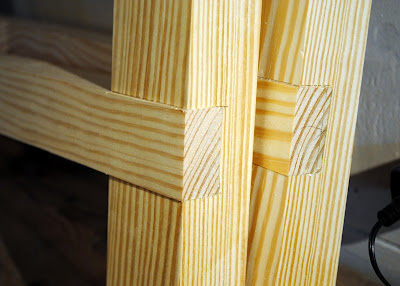 No he wasn't standing right behind me. No it wasn't just like Ben Kenobi would advise Luke. No Tom has not entered the cast of schizophrenic characters that inhabit my mind. I was remembering something he'd said to the students at Sawlapalooza.

"Remember. We all want to be "that" woodworker so let's make sure we focus on realizing that."

The statement gave me pause when I heard Tom say it. It makes sense that we each strive to be that idealistic woodwright. One part Krenov, one part Underhill, one part Pekovich, with a sprinkle of Schwarz, Miller, and Tolpin, All knocked back with a Gary Knox Bennett chaser.

Chasing efficiency and professionalism is noble to a point, but more so is remembering that I am not a pro. I don't rely on sawdust to feed my family, and I have no real desire to trap myself in the thankless circle of dealing with customers and their assumption they're always right and important. 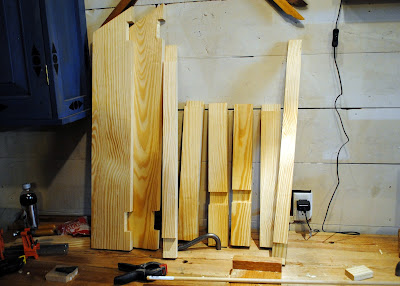 I slowed down a half step, stopped keeping close watch on my time, and instead went back to simplicity. The thing I really love about being in the workshop. Working in the moment.

I enjoyed the rest of the saw bench build much more. 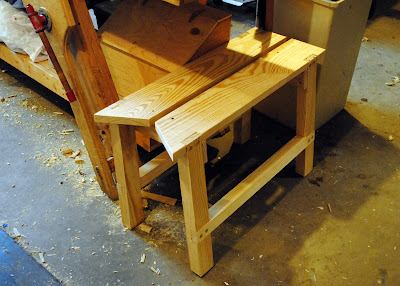