We are a big geek household. Many of us sit around a table and play Dungeons and Dragons every few weeks. We discuss comic book characters and storylines. There are the toy, tabletop game, and book collections.  We quote geeky movies ad nauseum and there is so much . . . so much more. The best part is it gives my a continued stream of things to keep connected to my daughters even as they stand on the edge of true adulthood.

Soon my two oldest are cosplaying the Moon Sisters from the movie "Kubo and the Two Strings" They have the hats and masks and are finishing up cloaks made of feathers, but one of them needed a replica of a magic pipe. 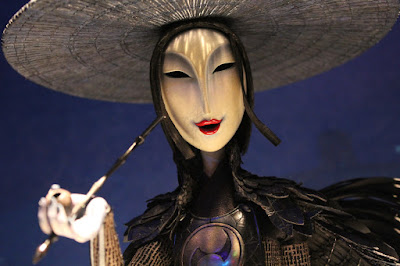 I split off a section of riven red oak, mostly because I have a ton of it. and before I put it on the lathe I did what I considered would be the most difficult thing, drtilled a hole through the center. Well not exactly center, that is nigh impossible, but I drilled it close enough. Then I located the drill hole in the center points as I chucked the piece into the lathe.

I understand common sense thought that the conical points would spread the holes and cause the wood to split. I figured what the hell I'll try it and if it fails, I'll try something different. Turns out it worked just fine. This time. Will I be lucky in the future, I don't know. Probably not. But it was a cool way to center a hollow hole in a spindle. 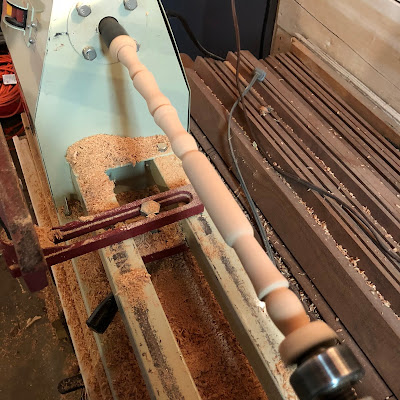 A little time at the lathe and I worked down the bamboo-ish look of the movie pipe. A lot of skew chisel work which I find to be a fun challenge. After sanding I rubbed on and buffed off some lamp black oil paint. 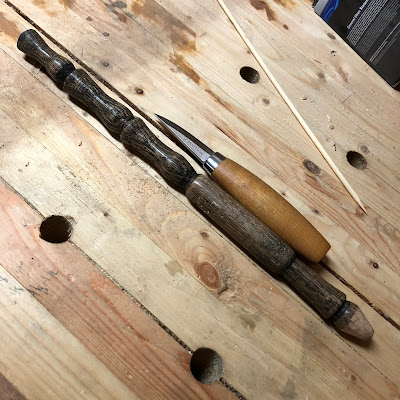 I finished up the end of the pipe with my sloyd knife. Then turned my focus to the bowl 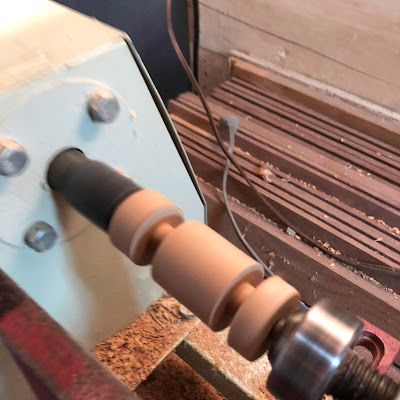 I chucked a small section of 1 1/2" diameter maple dowel into the lathe. Turned a 1/2" round tenon on one end and shaped a bowl shape on the other. 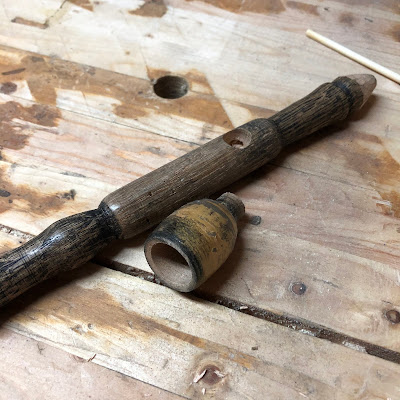 The above pic shows the inbetween of the finishing. The bowl is done, the stem is about to get re-chucked on the lathe to undergo the final finishing stages, For the gold I used some gold buffing wax my daughters found at the local art store. It was very dried out and difficult to apply but kind of gave the burnished, well used and weathered look I liked. I finished over the wax with a coat of CA glue to give a shine finish, a fake Japanese Urushi if you will. 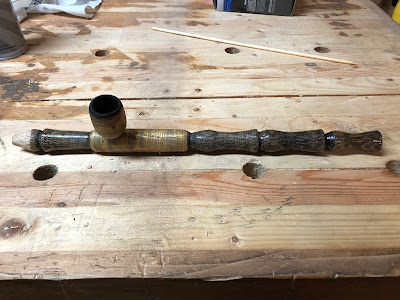 I assembled everything then passed my long drill bit back down the end and into the pipe bowl's tenon. This opened up the air passage between the stem and the bowl. I suppose you could really smoke out of this thing if you wanted but I'm certain it wouldn't be that pleasant. 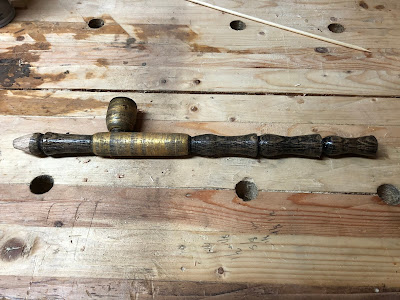 I used a propane torch to burn and blacken the bowl and bubble the wax and CA glue finish. The weathering and wear this provided was spot on. 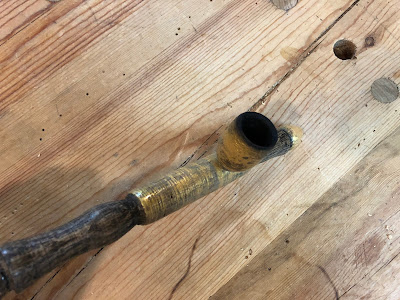 Best of all, Number 2 daughter was very happy with the result. And with stealing my sweatshirt to hang out in the shop on a cooler autumn night. 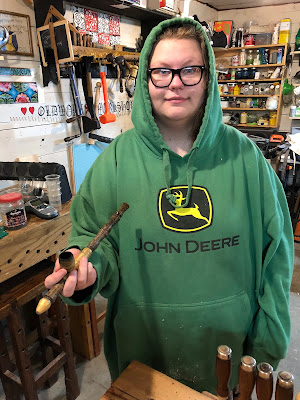 An enjoyable couple hour build, that kept me occupied and made a minimal mess because the shop was already prepped for the next day when . . . 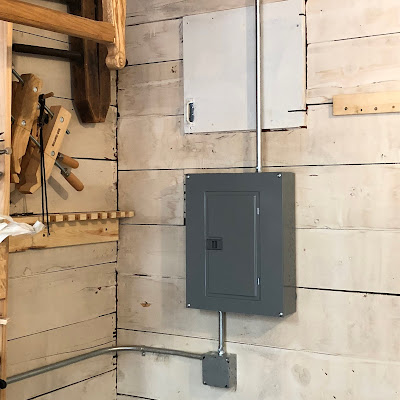 . . . TA DA!!! The electricians showed up to run copper from the house to my new sub-panel. Four new outlets inside, one outside, and lots of room to run more in the future. I can become 220 capable now should I choose to be.

Very exciting times in the shop.