A Gaggle Of Gauges 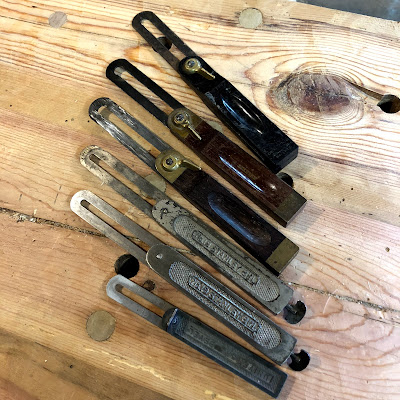 Sometimes it’s a struggle but I really don’t like to collect tools. I’d rather keep just what I need and have it be good and reliable, maintaining some fidelity to the concepts Chris Schwarz writes about in The Anarchist Toolchest. The real exception I’ve made is dividers. I like dividers and I can justify owning several pairs because...we’ll just because ok. It’s nice to be able to keep several settings static when working, but mostly I just like to have them.

Apparently I have similar feelings about bevel gauges. You can get along with one. Two are very nice for making fancy dovetail joints or drilling resultant angles on staked furniture. Maybe one smaller one to fit into smaller places.....

Seriously this collection of 6 has grown organically. I disliked my first bevel gauge, a box store special. It worked and was reliable but the wing-nut tightening mechanism often got in the way. Then upon scouring antique stores I found a great Stanley 25 gauge with the low profile thumb lever locking nut. It was a nice upgrade. After a bit I found a second #25 and the box gauge was relegated to the “general construction” tool box.

For a long time I looked about for a fabled Stanley #18 because the locking on the end feels like the smartest answer for getting things out of the way but I never saw one for a good price. I picked up another lever lock, this time a cheaper Stanley Defiance 1225, lighter with a plastic body. Not as nice but useable. I also found a smaller 4” no name gauge that locks with a wing-nut but the smaller size is sometimes nice and justifies the trade off. Then amazingly two #18’s have fallen into my lap in a span of about six weeks. I’ve spent a total of $20 for both combined. They’re great and I’m happy to have them but the acquisition has lead to some decisions that must be made.

But as I try and turn this ships rudder more into teaching woodworking, the concept of keeping a set of “student” tools come to mind. Or even just a traveling tool set, its amazing the amount of hours it steals to plan and pack to do demos or teach a class. Just the moving of things from my traditional tool chest to my traveling Dutch tool chest. And I think these #25’s would fit very nice into such a situation.

In the end, 6 is not an overwhelming number. I’ll find space for them or gift a few away. It is nice having those options over the other way. But even more it feels nice to fall into a couple #18’s and have my “last” bevel gauges taken care of.


(**edit: This is a repost of a recent attempted post. giving a mobile app a try that seemed to work, but upon further investigation was a broken attempt. Apologies for the weirdness)