A little over five years ago Chris Schwarz started (another) revolution. He built a chest and published an article based on a photo in Jim Tolpin's "The Toolbox Book."  I don't know the whole story, I've never gotten around to asking him (yet) but the form dubbed the "Dutch Tool Chest" caught on. I swear I observe an Instagram build nearly every other week.

I built my own version myself and use it for traveling for demonstrations and (I'm beginning) to teach some woodworking classes. 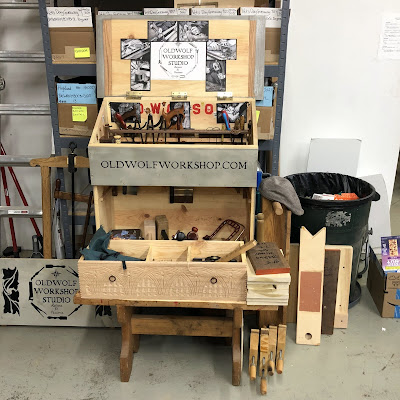 It's a form much older than five years. The inspiration in Tolpin's book says that chest is from the 1800's. It could go back further than that. I've seen many slant lid tool boxes at antique stores and nearly all are labeled "Blacksmith Tool Chest." Which makes me wonder the source of that specific information. 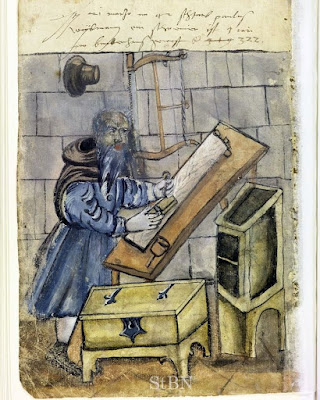 This image from a 15th century record of guild masters from 15th century germany shows what could be considered a slant lid chest for certain. Was it for tools or for Hans' prize wienerschnitzel collection? Why couldn't it be for both?

I was recently clued into a form know as Conestoga Wagon chests. Basically the slant lid chest hung on the side of the wagon to hold . . . you know tools . . .  or wienerschnitzel.


The Conestoga Boxes are next level on the hardware. Google them and you will see some far out decorative stuff on the hinges and the hasps. I really like a lot of it and most of the hinges are unique to us modern(ish) woodworkers.

Most hinges have a pin and segmented barrel pivot between two leaves. The Conestoga box hinges are one leaf with a continuous barrel wrapped around a staple which is driven in and clenched through the wood.

I love these chests and always wanted to get my hands on some of the iron work to make one. I imagine I'm not the only one. Wouldn't you like to have one of these too. All made by your own hand?

I've been dipping my toes into teaching woodworking classes. It's been a long time goal. I love teaching and have missed it since I left the college a decade ago. (I spent a few years teaching Surgical Technology and Central Service Technology for a living . . . snore) This last year I snuck in a few small Roubo Book Stand classes to supplement Mark Harrell's Saw Sharpening Seminar and man I'm smitten all over again.

Mixing teaching and woodworking and not answering to Associate Deans. This sounds like a win to me. I started casting about for an opportunity until a great one found me.

Tom Latane is one of the best blacksmith's in the country. A contemporary of names like Peter Ross he's made things for Peter Follansbee, Chris Schwarz and more than I can name. I'd say something stupid like "If you were to cut his flesh, he'd bleed traditional craft instead of blood!" if it didn't sound two parts Barnum & Bailey and one part Chuck Norris.

Seriously the man is the real deal. He's studied his craft since his teens, he's had museums hold exhibitions of his work, his home forge looks like this. 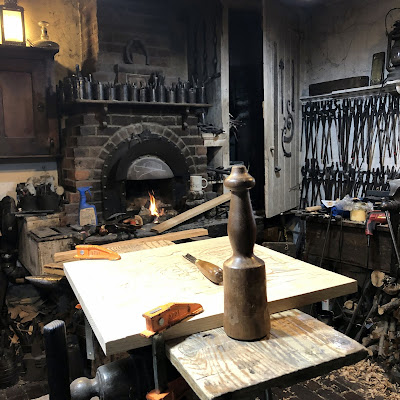 And, for me, the best part is I get to call him one of my good friends. We've been teasing each other about teaching a class together for several years. At a Christmas party this year we finally made some solid plans and now I'm excited to fill you in.

I will be offering more and more information on the blog as this month goes on but I am excited to announce this joint Slant Lid Tool Chest class. It will be a four day class running May 2nd - 5th 2019 at the Tunnel Mill Craft School just south of Rochester MN.

Students will spend half the day with me assembling the components of this chest and half the day at the forges with Tom creating the unique staple hinge hardware (and even more if their skill level allows)  Two crafts in one class!

Tunnel Mill is an idyllic location. It's a historic site that offers room and board along with the cost of tuition and different than some other craft schools, everything is open and the students may stay on site along with the instructors so even if the class work is done for the day and you want to do some catching up, at the bench or at the forge, that's an easy reality.

I don't have an exact cost to quote at this time but I understand we're talking ballpark $600 - $700. But remember that's a bed to sleep in and meals included. Four days in a bedbug motel will cost you at least half that with a questionable continental breakfast if you're lucky.

There will only be room for 8 students this time around. So hop on the Conestoga Wagon quick if you're gonna ride. 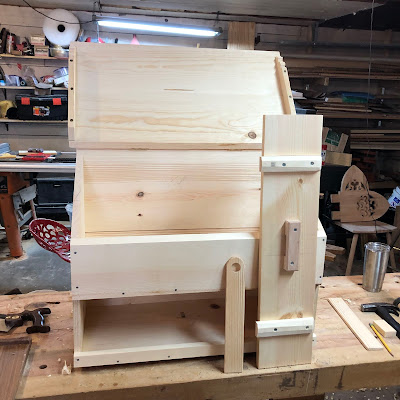 I will be following with a better introduction to the school and a bit more about Tom, but if you're interested you can check out the school's web site tunnelmillcrafts.com  and drop Carol an email at jc-adams@msn.com to let her know you're interested.