When people find out I got hurt (a torn distal biceps tendon) and this resulted in a significant time away from both my shop and my paying day job (16 weeks in total) the common well-meaning response is...

"At least you did it over summer."

I'm not sure if I've ever used this platitude before, I might be guilty, but I will endeavor to not use it again. I suppose people associate the summer with vacations and laying by a pool and getting a tan and everything associated with summers off from school as a child. But I'm not a child, not any longer. I like to work, summer is my busiest and the easiest time I have to work in the shop because while I may sweat, I can drink water to replace that. I don't have to spend the money heating the place like I do in the winter.

I know some live an, at least, semi-sedentary lifestyle.

I am just not wired that way I guess, Even my sleep setting is screwed up, I'm ok with it I've always been that way. Sure I waste a day here and there, but not many. If I spoke to a shrink about it I'd say I feel like I have a list of things I NEED (want) to accomplish and I know there isn't enough time on the clock. I tell myself it's steps towards a deep desire for independence and autonomy, but I wonder if I make it out to be one of the 863, will that be independence or will I be tied to more of this feeling of waking up late on the day of a test I didn't study for.

I might also just be full of shit...  anything is possible.

So what does a fellow with a workaholic drive do when he's on the shelf and not allowed to lift more that 1 - 2 lbs. with his left hand???

He still finds things to do.

To keep my hands busy I have fallen back on one of the loves I focus less on than I'd like. I enjoy making replica props, I have several on my mind and in my sketchbook that require wood and metal working but a few projects that require different material skills and, coincidentally are lighter. I chose to work on a take on Han Solo's pistol (a DL-44 Heavy Blaster) from the Star Wars movies. 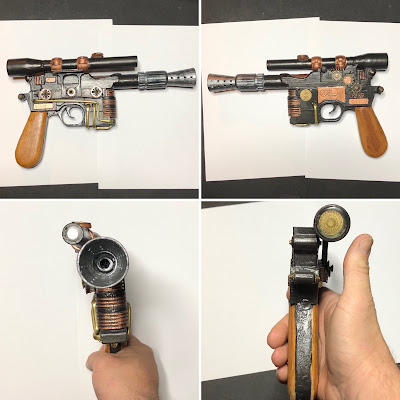 I had a 3D printed kit laying around, but as I commenced to sanding and assembling I started to feel a little disappointed with the lack of detail or accuracy to the Hero Prop. It would have made a fine toy, but just wasn't headed into the real of "desirable object." I started to think about I could "Kit-Bash" or add things to improve the gun and then started to think about how I could just go sideways and make this my own take on the iconic prop.

As you can see I decided to move in a Steampunk aesthetic. I added gears and pns and brass screws and custom bent some brass tubing. I ditched the horrible plastic printed handle scales for some nice cherry ones. I weighted the body and handle of the gun by packing finishing nails and BB gun ammo into hollows and doing epoxy pours over that. I painted and lightly aged the work.

In the end I took a disappointing toy and made something I'm more proud of.

But the nature of this style of model building is a bit plodding. It requires patience. I would work for a half hour to an hour and then have to let tings sit for 24 hours for epoxy or paint to cure before doing more. Then what? 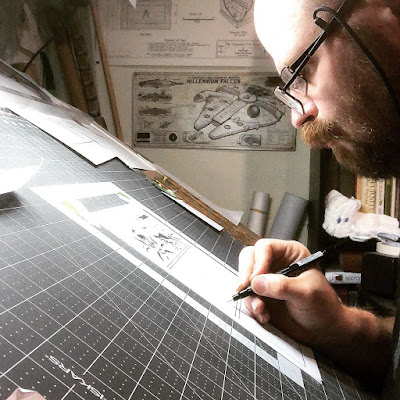 I've been writing and drawing...but it has not been woodworking related. I've been making a comic book...

That actually takes me a bit to admit, while I think the stigma is mostly past now with the multi-krazillion dollar movies dominations and the subsequent merchandise spread, I grew up in a time and place where anything superhero / comic book related was a taboo past 3rd grade. I did not need to give my bullies more ammunition.

I always looked around before ducking into the comic book store at the mall and I always hid in the back behind the stacks while perusing issues. Activity like this was to be identified and suppressed with strict prejudice.

If I let the whole of my flag fly I played, (and still play) Dungeons and Dragons. I run a monthly game for some good friends and two of my children once a month.


Anyway, I suck an writing novels, I've tried and burned/deleted several starts and a couple of finished ones, but I still get snippets of a story, a scene, a beginning that flash through my mind at odd times. The desire to write these thoughts down and record them in nearly out of my control. Recently the thought came to me that since these scenes have such a visual component to them maybe I should try to tell them in a visual way.

Writing a comic had never occured to me before. It sounds like a silly thing to start doing in your mid-forties. But that's exactly what I did.

I have a story idea I've kicked my head for 25 years or so. It's never gone away. It's a "superhero" story where the protagonist's powers come not from our yellow sun or a mutation of the "X" gene, but are channeled knowledge and abilities from past lives and I started putting it to paper and before I knew it I'd written and storyboarded scripts for a ten issue arc or season and made plans for two more seasons to follow.

Then there's the hard part, where do you go with this...

I decided I would have to draw it and self publish it if I wanted to walk the whole line, but there's a lot to learn with this and I didn't want to make art/production mistakes in creating issue 1 I'd regret by issue 10. So I decided to write / pencil / ink / letter / design / and publish a single issue - one off comic because I learn best by just doing and screwing up. 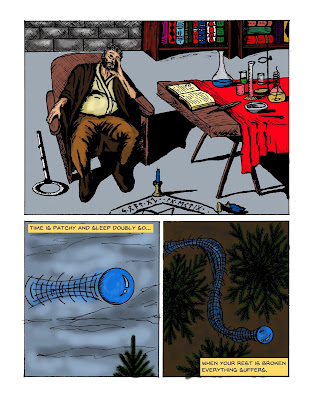 The book is titled "The Memory Remains" and it's the story about a sword & sorcery fantasy style wizard who has faced all the dangers, captured all the glory, done all the great labors and retired to his tower to rest and relax. No one escaped the rigors and erosion of age, his body hurts and his mind isn't what it used to be but he was given a vision many years before of his doom and now is the day that horror has come to him.

All the anxiety, anger, and confusion of dementia are against him as he faces the adversary foretold to be his ending. 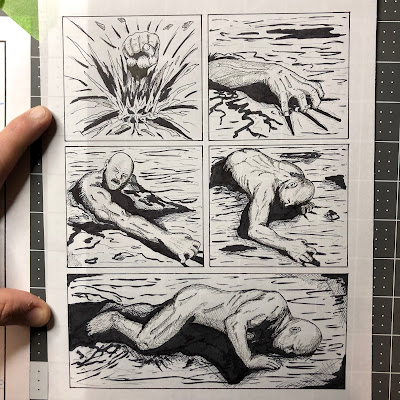 The story nearly wrote itself. The art is coming along and I'm not as polished as I like but the roughness is a decent style for this dark story. Because I'm a super fool I can't take on a project without learning a new skill. All the art I've ever done or learned was analogue, I've decided to do the coloring and lettering digitally and after a frustrating day and some help from my son, the learning curve has flattened out and now it's just getting faster.

I know I get crap for not updating things here more often but, for example, this post stole a whole morning away from my progress at the drawing board... The clock is ticking remember and I've got shit to do.  I do update more frequently on Instagram (its faster and more convenient) so you can see something there almost everyday. I have 2 accounts.

One for woodworking and making things...
https://www.instagram.com/oldwolf_workshop/?hl=en

and one for the creation of the comic books and other geekery
https://www.instagram.com/reincarnate_comic/

Of course there does get to be some crossover between the two, go ahead and follow me there if you don't already. I promise it won't hurt...much. :)