A little over a decade ago I started clicking keys on this blog for one real reason. I wanted to get more comfortable with writing. My deepening interest in woodworking gave me something to write about and I was certain, in my own egocentrism, I was inventing the blog on woodworking. Finding people who were both better woodworkers and better writers than me spurred the competitive gene I carry and I was, for a while, obsessed with capturing this craft in the most perfect words possible.

Like anything, I mostly failed forward and I've had some successes and setbacks. Nothing to give up on, I still feel like I have at least one, maybe two, good woodworking based books inside my head that have a fighting chance, but those things take time and sometimes a step back to let the initial carbonation bubble excitement settle down leads to something more mature and nuanced. 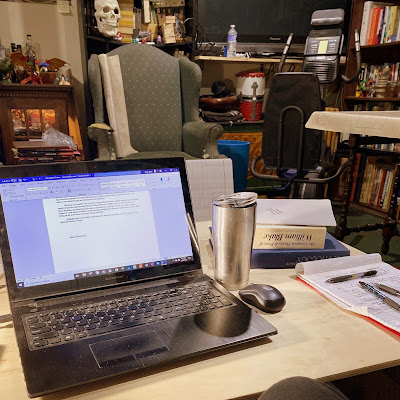 This picture is my new(ish) normal every morning the hospital doesn't own my ass. Breakfast and 20-30 minutes on the recumbent bike followed by coffee and quality time with my laptop.

A few months ago I spent an insomnia night up watching a series of youTube videos, like you do. This was a series of college lectures given at (I think) BYU by fantasy author Brandon Sanderson, a class specifically about writing fantasy and science fiction. The takes on organization, world building, plotting, and tropes were interesting, but what I really came away with was the insinuation, sometimes subtle, sometimes not, that writing is really another form of craft and artisanship.

I knew this, it's not new information or advice, but knowing something and putting it into practice are two different things. I started this blog to get comfortable with writing, and it did than. But now I want to get better at the craft of writing. When I started this blog I was comfortable with many woodworking operations. I could saw and hammer, but as I became immersed in the craft of woodworking, I began to practice it nearly everyday. Not by cutting practice joints and doing a dovetail a day challenge, that shit never works for me, I have to build a thing, decide it sucks, and build another thing better, learning my lessons and again failing forward.

It worked, I've become a fairly decent woodworker. We can all be better and I still work at it, but I feel like I can hold my own in a conversation. I've decided to apply the same routine to writing. Four days a week when I can I'm sitting down and my laptop and working to a goal of 1000 words before I get up to accomplish anything else.

I'm starting in familiar territory, rewriting a fantasy novel I've battered around my head for more than 20 years. A book I've actually written before twice and those scribbles live in the bottom drawer of my filing cabinet and that's more respect than they deserve. I haven't worked on the story long enough I've forgotten a lot of the details I had before, just the framework, which is serviceable and decent. I can restart from scratch and possibly turn out something readable.

Or get my practice in and move forward. The effort is worth it to me either way.

Currently 1000 words feels pretty exhausting. I'm ready to get up and do something again once the reps are in, but sometimes in the evening, I'm finding myself coming back to work a little more. It's building a habit, a good habit that I hope will only pay off for the better.