I spent most of yesterday cleaning up in the workshop. After I finish the construction on a project and before I jump in and start another I usually spend a day or two cleaning up the shop. Again I own no dust collection system so the floor usually is covered with a 1/4 inch in the areas I work most. And with all the sawing and jointing this work bench took, I was closer to 1/2 inch, not quite deep enough to lose small children and pets, but respectfully getting there.

I enjoy the time cleaning up and reorganizing the shop almost as much as I enjoy doing joinery. I will tweak things a bit, maybe move some tools from one spot to another more convenient area, maybe it is just shifting the drill press 5 degrees more to the left.

This time, because I was setting up shop, the clean up was much more extensive and satisfying. I created a place to hang my clamps right near the workbench, a most elegant solution courtesy of my wonderful wife. I will have to make a point of sharing a picture of it in the future. I also hung 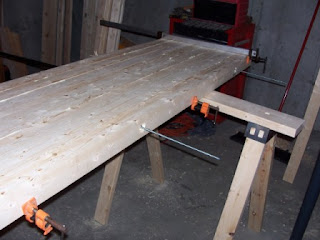 a small cabinet I keep my drill press accessories in, and generally began the process of creating a flow for work to pass through the shop.

At any rate. I had finished the top of the bench. And boy oh boy was it a big baby maker. I am no small man, infact I am usually stronger than I realize, and I had to really pay attention to what I was doing when I was moving this thing around. That makes it well in excess of 100 lbs. probably pushing 150. I had to create an equally stout base to support this beast.

The easy thing to do would have been to create straight legs, and the next time I build myself a bench that is exactly what I will do. But the angled legs of the Nicholson workbench are the look that initially drew me in like a sailor to the sirens. The problem was that I had modified things from the original, and was going to continue to do so. I decided while I was constructing the legs that I would do away with the broad board that made up the face of the bench. There were two 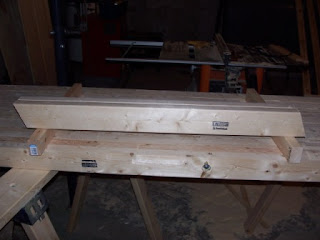 realizations that made this decision. 1) I wanted to use the under-shelf of the bench for tool box storage. I have several tool boxes for several occasions (one to grab for plumbing, one for electrical, one for automotive, one that has forge and blacksmithing tools. . . you get the idea) and these things always have lived under my bench, adding their weight to its mass. I had no intentions of changing that and I felt that the wide board would get in the way, At first I fancied leaving the face board and just leaving the access from behind for the tool boxes but then as I worked I realized reason #2. I have always used my 7" pony clamps to hold some pieces down to the bench. I found my self doing it while I 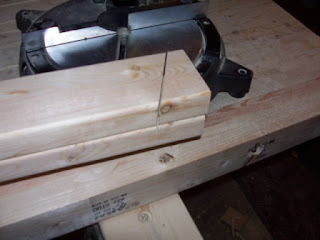 was cutting the joinery for the legs, and I realized that if I were to place that face board on, then I would be killing my ability and freedom to do that anywhere on the bench. Going once...going twice...sold!! There would be no wide face board on my bench. The choices I made in constructing the top removed the structural necessity and made the board nothing but a glorified deadman anyway, if I decided I wanted a deadman in the future then I would retrofit one. 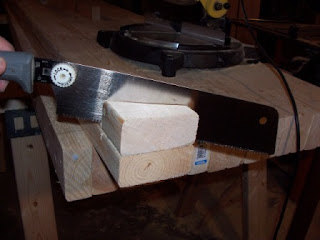 target height. I took some math and some guess work and some "hmmm that looks about right" In the end the length was one of the things I got right dead on. but it would have been significantly more straight forward with straight legs.

I face glued two more pairs of 2x4's together, but this time I did not run them through the saw, infact I hardly cleaned up the squeeze out. From this I would make the legs of the bench.
I chose 22.5 degrees (half of 45) the same degree of angle that you find in an octagon. and I cut the legs with a combination of my pitifully small miter saw and a hand saw to finish the cut. 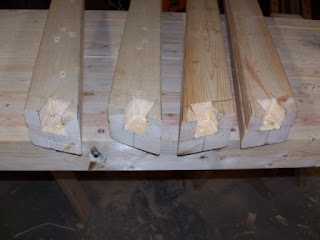 After I cut one to my satisfaction I used it as a template to match the length on the other three legs. I then had to decide how I was going to joint the boards at the top and attach them to the bench, a cross cleat that mortised into both legs seemed to make sense to me. This worked well and it didn't. Planning the mortises on the legs was troublesome, I had to pencil up and erase three layouts before I decided that I was OK with what I had. But when the legs were joined to the bench top the did not settle in smoothly. A combination of both choosing not to flatten the underside of the bench and 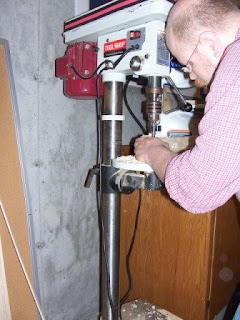 not getting the cleats 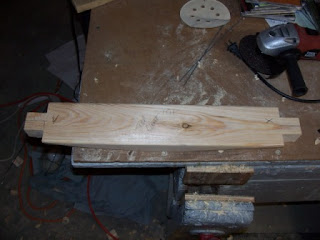 seated perfectly square into their mortises. something that can be probably forgiven and worked around with straight legs, but an issue that had to be shimmed for a solution with the angled legs.

I marked out the mortises, not traditional closed on four sides mortises, but ones where the tenon settles in to an open top. I'm sure there is a name for this style of joint, infact I may 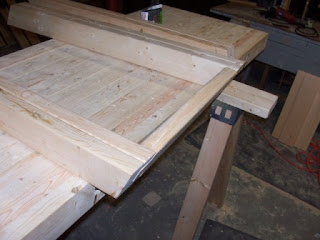 know it.. but it does not come to me right now.
I removed the mojority of the material on the drill press with a forstner bit, and chopped out the rest with a 1" chisel. I have to say that it was really the most fun I have ever had working with the chisel, In the past it has been a lot of hammering and work to accomplish anything with a chisel, I assumed it was my technique and more likely my ability to competently sharpen them, I tried and thought I was doing everything right, but I was never happy with how they worked, but man did that change as I worked on the new bench top. The chisels accomplised what I wanted them to do just the way I always imagined they should. I 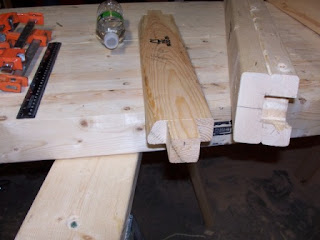 never realized how much of my energy was being absorbed and wasted by the springiness of the old plywood workbench. I have to admit, it was very gratifying.

After dry fitting the pieces I noticed that part of the cleat was extending past the leg. Not something readily visible, but I would have known it was there. So I marked off the overhang with a pencil and cleaned down the edge to where I wanted with a draw knife and smoothed with a card scraper.

Next I needed to remember, (and I am glad I did) 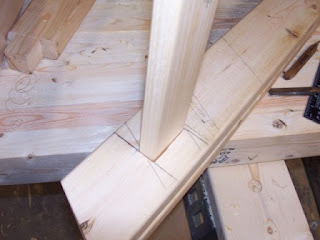 to cut the mortise that the alignment bar / cross bar of the leg vice would slide through. I would have also drilled for the screw of the vice, but I did not know for sure where I was going to locate it, so I chose to leave it and suffer later, turns out it wasn't too bad at all.

I cut some scrap boards the same length as the inside between the legs and used them too keep the aparatus square while I glued it up. O also then drove some screws down through the tenons and into the legs, I'm not sure if this choice accomplished anything, I love the thought of all straight up glue and wood joinery, I'm just never 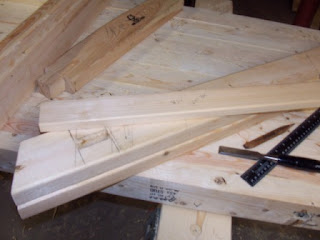 sure if I trust myself enough to not add a little finish nail in that dovetail, or pin the mortise and tennon with a dowel at least. What I probably need to do is trust myself a bit more than I do. well if hat isn't one hell of a metaphor for life, bla bla bla huh? On that note I guess I should sign off for the night, coming up next... the bottom shelf.