Welcome to the Wood Shop

Since my family and I have recently relocated from Western Wisconsin to Northern Maine, (and I do mean Northern - it's not the end of the world but you can see it from here) I have been without the usual group of friends with like-minded pursuits and tastes. I guess you could say I am starting this Blog as an experiment, a mixture of both a chance to show off what I work on in my spare time... something I would have normally done to said "friends"and a chance to pontificate at length about whatever I'm working on in my spare time, also an activity that would have been shared between myself and such friends as I had gathered.
I don't expect this blog to replace those friends or those connections, I still have those, though via more distance. Instead I am just curious if I begin to throw these things out here into the infinite void of the internet, with no mention to family or friends that this blog s here. (They do frequent my other blog where I chronicle our new adventures) I am curious to find what variety of response there is out there.

One of my hobbies in life is woodworking. It began for me half from necessity, half on a dare. NO not quite a dare, a whisper of a dare from a very influential lady. We purchased the proverbial "Money Pit" and thought we would "fix it up" so began an journey of a man who had never taken a shop class in his life. I had studied some architecture and design in my arts and humanities classes, so I had some of those things, But up until this my shining moment had been creating a built in bookcase in an apartment via pressboard and "L" brackets... you cannot get much more prepared than that.

We moved in the weekend before the fourth of July, on July 3rd we noticed a small, but persistent leak from under the faucet in the downstairs bathroom. This leak led to a year long, complete bathroom remodel, including custom built cabinets, accomplished by myself and mountains of books and tools. Now mind you tools were not foreign to me, I had spent my high school years working as a farmhand, and you get used to using tools. But I had never done anything like this before. All I owned to start with was automotive tools and a cordless drill...

One remodel lead to another and another... this explains the necessity.

The hint of a dare is Norm Abram's fault. We got into watching home improvement shows on TV, I mean after all where else would we get all these great ideas for all this stuff we were gonna do for the house. Low and behold we also began to watch the "New Yankee Workshop" where Mr. Abram's does an excellent job of showing both the basics of things and the advanced. I admit now I am sometimes perturbed by some of his access to beautiful wood and top grade, only in my dreams, tools. this is mostly envy, but some of is that I have found my own methods of work now, and they do not line up exactly with the way Norm works,

Anyhow, this beautiful lady, who I worship, leans over one day while Norm is on the tube and says. something to the effect of "I think you should build me one of those" I laughed and decried my pitiful lack of skill, and we both laughed. Still she would repeat this phrase over and over again, everytime the damn show was on and she saw something she liked. Eventually I got it in my head to try.

I have had three dedicated workshops in my life so far. Well...two, I am currently working on the third. I will use this blog to chronicle the set up and work for this new shop. I have things I have wanted to do and build for a shop for a long time, but I have made due with what I have had. There were always other things to build and other people to please. I had to liquidate or give a way a lot of shop furniture for this move. Bringing mostly my tools, a cabinet that once was a miter saw station for me. (who knows what it will be yet, it is just a shit collector so far) So there are things that I need to run a new shop and since now I am here and I have time. I am going to build the pieces I have always wanted to work on. Infact I have begun this process. 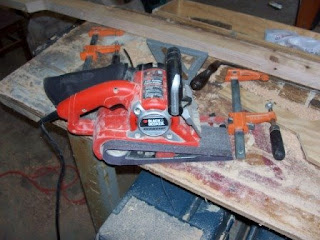 My father had given me two rickety old metal workbench legs that he was gonna throw out. You know basically two metal boxes with legs that you attach some plywood to and blamow... instant workbench (if you are a woodworker I can almost hear you groaning now) I will look and see if I can find an old picture to post here... well not the greatest pic but you can get the idea

yes it shifted and moved and was a P.O.S. but I used it for 5 or 6 years... built some very nice things on it as well. but I had always wanted a real workbench, like Pinnochio wanted to be a real boy. Well now I have one, I am almost finished as I begin this blog but I will spend time going over the process. For now here is the near finished product, I'll talk more about the influences and process over the next several blogs. 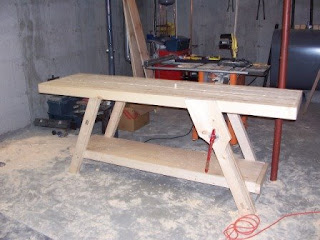 For now it is late and I will go to bed, Good Night All