A "Strange" Commision. Part One 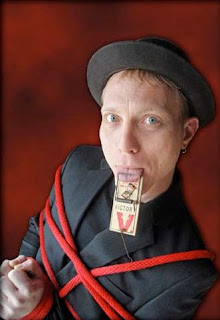 I know a man. A strange man, He's a mysterious and strange friend. He sometimes goes by strange names. He sometimes wears strange clothes. He definitely has some strange hobbies and strange talents, and sometimes he shows off these talents in his Strange Show. He is Josh B' Gosh, a performance artist whom I've known for years. He performs street and stage shows at many fairs, festivals, and get-togethers around the western Wisconsin area. I really like his stuff. I have seen street magicians and performers by the hundreds, most of them are kind of the same fare, but Josh is distinct and different, his show makes me think of a cross between old time vaudeville showmanship and a circus sideshow. Both are highly entertaining when apart but when joined together by Josh's showmanship, well if you have the chance to see him you should, that's all I really have to say. 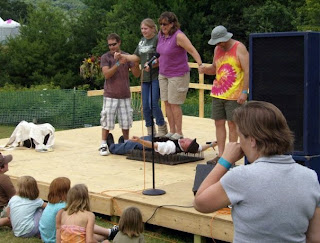 He does a lot of things with his show, from laying on a bed of 4 inch nails and having a couple of people stand on his body to Houdini escapes from ropes and straight jackets. One of the biggest crowd pleasers is when he plays with fire. Josh is an accomplished fire eater, and like a dragon, he can blow large balls of fire into the air. If you want to check out more about him and his strange craft you can check out his website at strangeshows.com 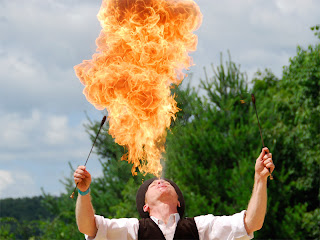 So why am I talking about Josh B'Gosh here on a blog about woodworking. Well the man contacted me a few months ago and gave me a bit of a challenge. I was just setting up the new shop, I was also new to twitter and he sent me a message asking if I had a lathe, I said yes but it wasn't set up. His reply was that he had no worries about time but he was interested in trying replace his current fire sticks, (you can see them above) with something turned and more substantial. I was more than happy to turn a couple spindles for him, and I tried to get an idea if he had some specific ideas for looks or wood types. The most I could really get out of him was, around 16" over all length, clean, simple lines, and have fun. He was leaving it up to me.

I don't know about you, I love clean simple lines of design, that's the appeal of shaker style furniture. It can also be some of the most daunting things to design. I spent a long time thinking about the design for the fire sticks, I filled several pages in my sketch book with ideas I didn't like. It may sound counter-intuitive but something highly ornamental would have been easier. You can hide mistakes behind ornamentation. Clean and simple kind of lays your soul bare, shows what you're made of, and I'm a middling turner at best. This upped the ante for me, making it a little of a challenge to try and pull off.

Finally I had something sketched that I liked. It held to what I considered to be simple and clean with a little class to make it a step above a dowel. It used the golden ratio in it's proportions. This is what I came up with. 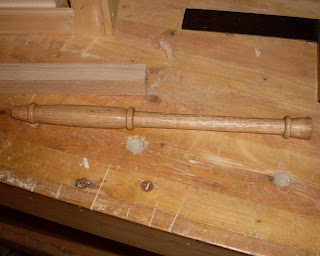 I sent him a pic and he seemed to like it, so I decided to turn the mate to it, put them together and bring them to him to critique in person, figuring I can make adjustments and even turn a different set based on his reaction and feedback. I can for sure use the turning practice no matter what. 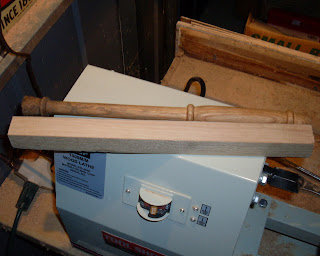 Here is the finished first handle and the blank for the mate. I have done several "one off" turnings in the past, but it's not often I have had the opportunity to turn a matched set of things. There was the big challenge I was looking forward to in this project. 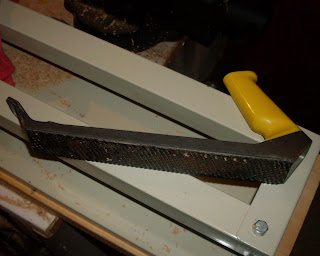 I had turned a piece of this white oak before and it is tough stuff, Just getting the blank rounded took several sharpenings of my large gouge. I knew there had to be a better way and this time I figured it out. I used my sureform rasp. 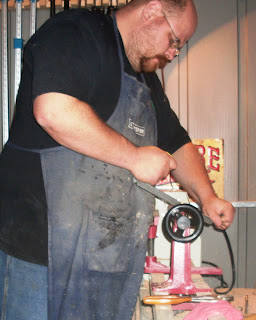 I'm not sure if I read about this technique or where I got the idea from. I have used woodwright's rasps on turnings before and this is only a step in the more aggressive. Sometimes inspiration strikes I guess. I bought this tool for some glue clean up years ago and have hardly ever found a good use for it until now. The blank is rough when you're done, but it's round and much easier to clean up with a gouge. 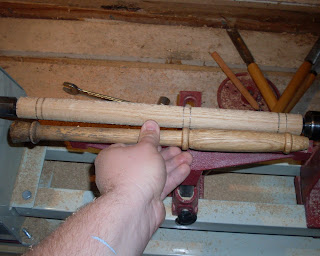 With the blank rounded I marked with pencil where the beads would fall on the piece and began to turn the work, going back and forth between a skew chisel and a round nosed scraper. 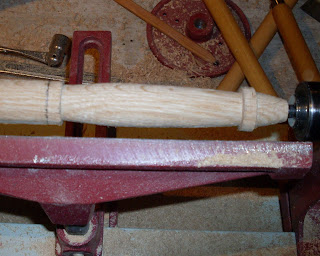 The base and the handle shaped easily, I used a calipers to get the diameters close to the original. I try to leave them a little fat so the last millimeters can be taken down when I'm sanding. 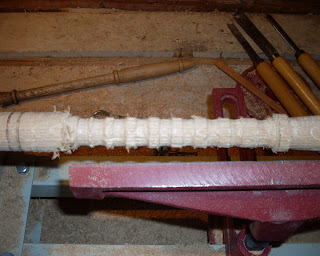 Then it was on to turning the center section, a smooth section 3/4" in diameter. You start doing a straight turning like this by turning it down close and then cutting bands of the diameter you want. This helps keep you from tapering the work. What's the easiest way I've found to get accurate diameter dimensions in a measurement like 3/4"? 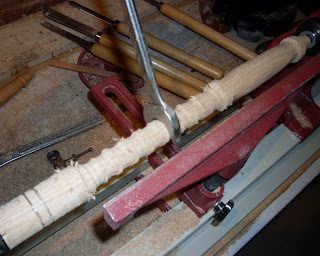 You use a open end wrench. Again this one isn't my truck I learned it in the book "Turning Wood: 3rd Edition" By Richard Raffan. This is the first time I've used this trick and I have to say it is so simple and I love it. 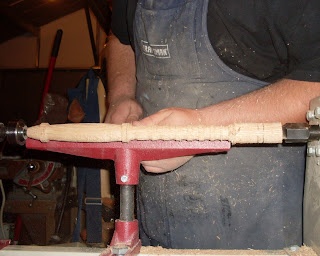 After the bands are turned it's easy to take the skew chisel and even out between them until everything is consistent. 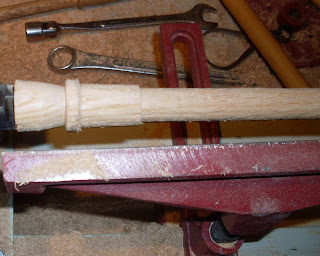 The it was just repositioning my tool rest and finishing up the reproduction. I ignore my beads until the main body of the piece is turned, then I go back and shape and round them. Often I use a "V" scraper or a Skew to do this. 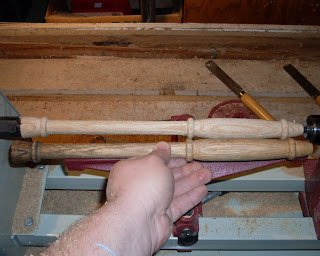 Not exact, but then again no turnings ever done like this are. This pic makes one look longer than the other but I think that's the forced perspective of the camera shot. The one in my hand is just a few inches closer to the camera. 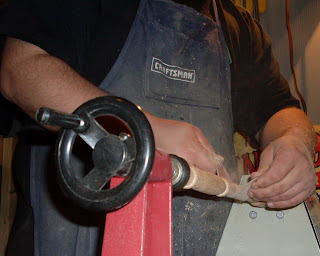 Then there was the sanding, first with 100 grit followed by 220. I love how easy sanding is on the lathe. I placed the finish while the piece was on the lathe as well. A little danish oil on a rag gets buffed in so easy on a spinning piece of wood.

Here is the finished product. I will cover the metal working part of this project in my next article. I had to work a little to figure that part out.

So until next time make sure to go check out Josh B' Gosh and his Strange Show and we'll finish up how I finished up this one. Maybe I'll get Josh to teach me how to blow a ball of flame myself, wouldn't that be a trick for the shop...