Well with the recent big snow we received here in the Midwest, my little burg of LaCrosse WI got a little over 20 inches dumped on it, Almost a week later and the city is still digging itself out. Walking the streets of downtown, where I live is a bit like traversing through a maze of high snowbanks with little passageways cut through in places. With all the snow, followed by a pretty severe 15 to 20 below 0 stretch, I have not been out to the shop for a little while again. My shop is located on my parents land, about 100 yards away from the house's back door. I just haven't felt up to shoveling a football field length path yet and my little kerosene heater is not powerful enough to combat 20 below temperatures.

So what does a woodworker do when they're feeling restless and unable to get to the shop...I suppose that depends on the woodworker. I myself have been doing a lot of reading, and thinking about the future of the shop. I have also spent some time updating the blog and trying to make it look more readable and professional. I am pleased with the changes so far. I am also going to take the chance to catch up on some smaller days at the shop I missed writing about along the way this year.

This fall I got into a conversation at work with Michelle, her and her husband Mark own 400 acres of land just across the river in Minnesota. I was asking her if they had any apple wood on their property that had been cut down or fallen recently. She called her husband and he told her he didn't think the apples had gone down much this year, but there was a couple of big pieces of Black Walnut left over from some loggers the year before and I could have it if I wanted. The only question I had was "what day can I come out?"

My God do those two own a beautiful chunk of earth!! They gave my wife Naomi and I "The Tour" where they have an old farmstead up on top the bluff and we walked down a trail to a rocky outcropping where you could stand and look over the Mississippi river. I so envy the treasure they have there, if I owned that land I don't think I would ever come in the house. 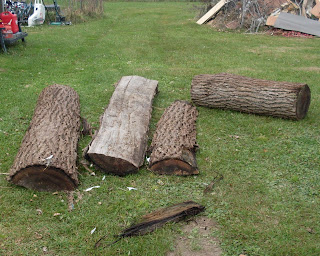 Mark helped me pull them down out of the woods and get them loaded into my van. Here they're on the ground out behind my shop waiting for me to decide what to do with them. Well, my band saw is just a little thing, 9" with a 2 7/8" deep cut to it. Nothing fit for resawing this stuff, The only real option I had was to split the log into radial sections that could then be worked down into board stock. So I gathered my tools of mass destruction together and set to work. 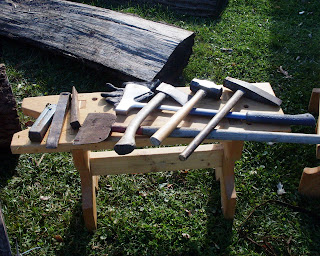 Three regular wedges and one on a handle, a heavy hammer to drive the wedges, a hand hatchet, an axe, and an ice scraper to clean off the bark. 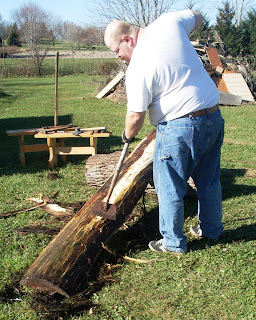 I started by stripping the bark off, the wood had been laying on the ground for a year or so and the bark was pretty moist. It stripped off fairly easily as I switched back and forth between a flat barn shovel and the ice scrapper to do the deed. 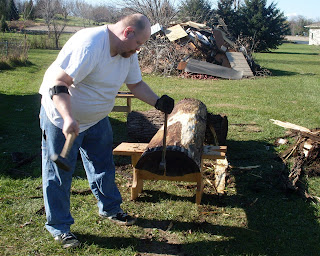 Then I muscled the cut log, one end at a time, onto my saw benches. This raised it up and made the work easier on my back, which is pretty much always a good idea if you can. I start with the wedge on a handle. I try to select as close as possible to the center of the cull and still choose a place where it looks prone to split. Several hits with my big Mjollnir and I have the start of a split. I hit the wedge several more times, actually burying it 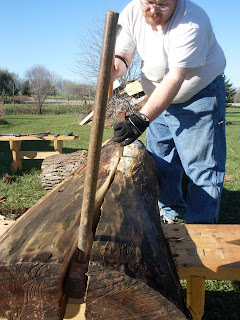 Then I get one of my other wedges and move down to where the crack is still visible but very thin, place the wedge and hammer it home. in the process most of the time the lead wedge would fall out onto the ground. 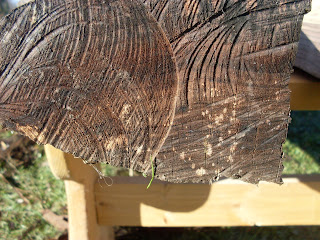 Then I take a second and study the end of the cull. You can see in the close up where the weathered wood has started to give up the ghost and create radial cracks. I try my best to select a good width that will split even down the wood and give up what's most usable. I say try my best because it is difficult to judge exactly how the board will go for sure as it moves down it's length. The best advice I can give is to just relax about it. There is a lot of wood here, more than I thought when I first looked at the four culls laying by the shop door, you will get lots of usable board. You just have to relax and take what comes to you. Another Zen woodworking lesson. 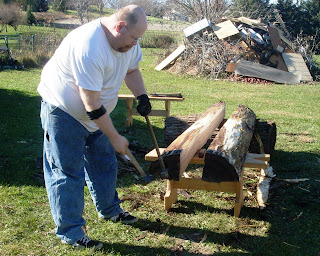 It seems to make sense that you then, start all over. and repeat the process again and again. The only mistakes I made is where I got greedy and thought I could render a board "just a little thinner" This is too blunt for that precision, and as I have yet to get my hands on a froe. I made due with making slightly thicker splits and leaving more work for planing later. 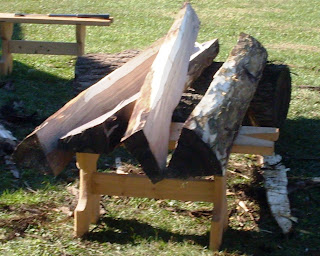 So eventually one becomes two...two becomes four... and you get the picture. Before I knew it I had more Black Walnut than I would have thought possible. 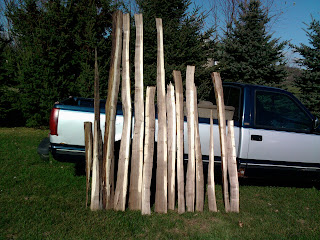 Here I leaned up against my dad's pickup, what I had gotten from one and a half culls. I have never gotten to work with black walnut before and I am really looking forward to planing some of this up and making something out of it next year. I'm thinking a couple of Bible Boxes and a couple of end tables at least. What surprised me is although the work is taxing on the shoulder and elbow with the repeated hammer blows, you really can move through the logs pretty quickly if you're so inclined.

Myself, I chose to take my time and make a day of this project, and what an enjoyable day it was, and now I have a big stack of wood with fantastic color just waiting for me next summer.


A little edit here: I was able to get somewhere with a much quicker wifi connection and so I thought I would upload this quick video I took while I was working. I'm not sure why the camera cut just before I finish off the split but you get enough to get the process.
Hey. . . Oldwolf Workshop doing some video on the site...watch out Matt Vanderlist and Shannon Rodgers. Just kidding, don't look for too much video from me.