Shop Made Texture Punches for Carving

Well, considering I jsut opened my rather sizable mouth writing about tools and the decision process when it comes to whether to skip it, buy it or make it, I figured I had better write a little about a couple of quick tools I made last week.

I was headed out to do a weekend living history demonstration and I decided to set up a woodworking set up for the first time. Instead of doing something big I decided to just focus on carving techniques I had been picking up recently from watching Peter Follansbee's new instructional DVD. The demo worked out great and I had a lot of fun.

As I was getting myself put together, gathering tools and printing patterns, I came to the realization that I was short a couple of essential tools, Peter uses a waffle textured punch sometimes on his backgrounds and he also has a couple different shaped punches for detail touches, a heart, a cross, a circle. I thought to myself, really they wouldn't be all that hard to make. and you know what, I was right.

I dug through the tool chest for some used up punches I knew where in there. I didn't get rid of them because I was pretty sure the good steel would come in handy someday. Among the pile I found an old cold chisel, a center punch, and a small alignment bar. Perfect. 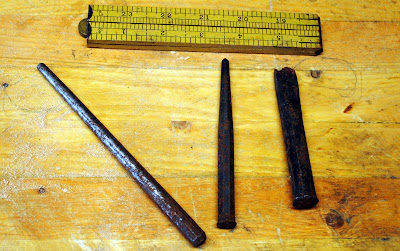 I attached my small machinist vise on the bench and went to work with the angle grinder shortening the center punch and the cold chisel. 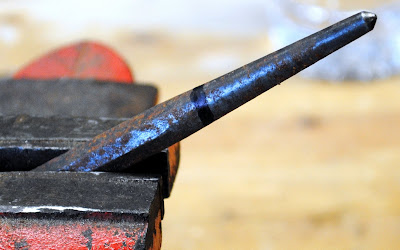 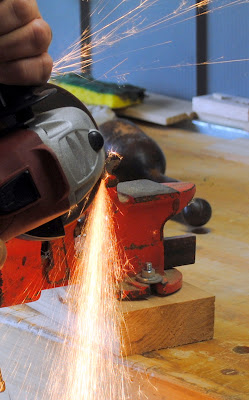 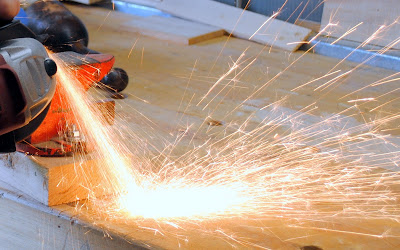 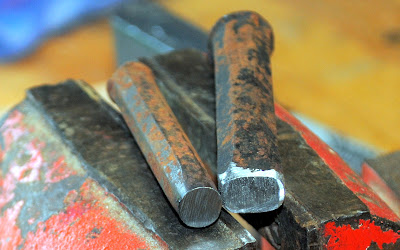 I just love those pictures of the grinding and the sparks coming off the steel. Makes me think a little of fireworks. I can hear the shop fire safety patrol in the wings and I don't want you guys to worry, I am very aware of what a spark in sawdust can do and I am very careful about clean up and safety, before, during, and after.

I smoothed over some edges on the bench grinder and with a bastard file. Now I needed to make some grooves in the faces. I could have started them all with a hacksaw but I opted for the rotary tool with a heavy duty grinding/cutting disk on it. 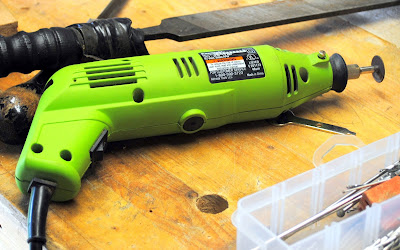 I clamped the steel in the vise and made a series of lines going one direction. Then I turned the piece again and made perpendicular lines. The most difficult thing was trying to remember to keep the lines a little course and not too close together.With all the grooves roughed into place I deepened them with a triangular saw sharpening file. 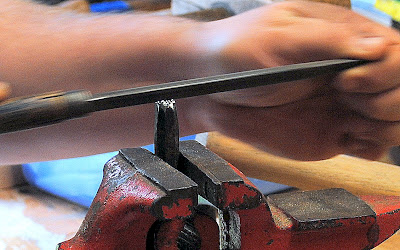 I then jointed the face of the punch lightly with a bastard file and I had something good I could work with.

I decided that a cross shaped detail punch would be the best place to start, besides the pattern I chose to start with had cross shaped detail punch marks so it seemed to make the decision easy. I took the longer alignment bad. clamped it in the vise and used the rotary tool grinding wheel to make some longitudinal grooves. Turning the tool to cut four compass points. Then I again used the triangle shaped file to give a final shape to the pattern. 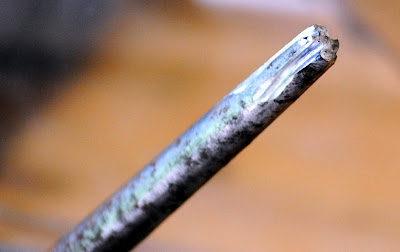 I wasn't perfectly careful, I was just making up how I was going to do this as I went along, so the cross didn't turn out symetrical, but in all honesty I kind of like the way some points are fatter than others, it adds a little bit of interest, and there's no reason for people to think that I didn't intend to make it that way, I mean it's not like I'm writing about the mistake and posting it up on the internet right? Oops.

So I made some test punches in a scrap of pine and I was pretty happy with the results. 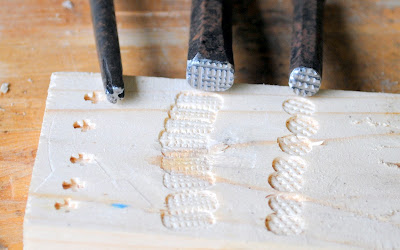 I had some scrap oak and I did some punches on there too, I wasn't as happy with the impression but I figures it would just have to do. I used them on the carving I did during the demo and I was using red oak, not the green oak seasoned for a few weeks like Peter gets to use. I was in a hurry and I ended up buying a board from the home center. So the stuff was thoroughly dried and hard as hell which lead to some tough carving sometimes, but the punches also seemed, at the time, not so effective.

Looking back at some of the pictured from working away I realize that the punches worked very well. I don't know what I was expecting really but the punches did a good job of leveling out the background in the carving, sharpening some edges and evening out the tool marks from removing material. After I backed away a few feet I realized that these were working great.

All in all, not bad for a little over an hours work in the shop. 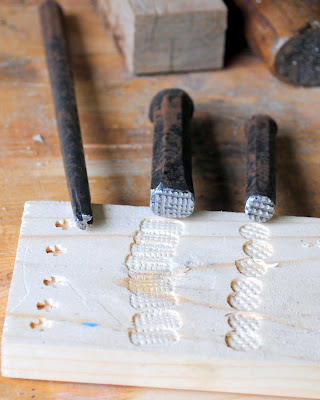