Finishing a piece may just be the weakest part of my woodworking game. I have a few tricks, a few go to standbys that I use and that's about it. Don't get me wrong, I own "Flexner on Finishing" and Jeff Jewitt's "Great Wood Finishes," and I've read them both cover to cover a couple times. I enjoy the concept and the chemistry of the process, I think my fault lies mostly in lack of experience

So, I can figure out how to repair the physical damage. No problem, well some work and worry, but that was just plain old workshop fun. Now I had to repair a trashed finish. 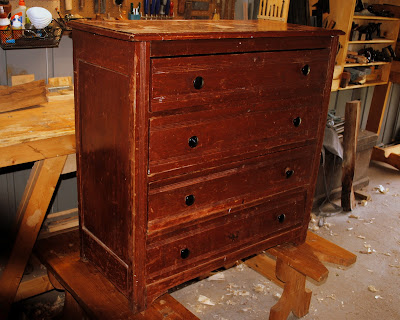 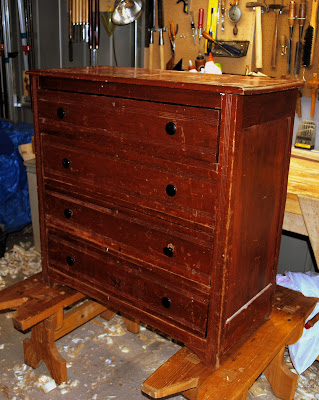 I wish I had a genie bottle and when I rub it, Bob Flexner would pop out to help with the finishing process. 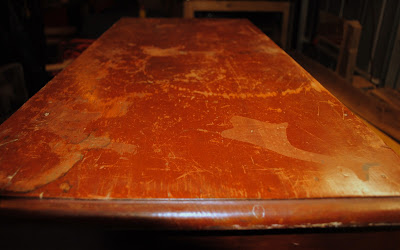 We've all seen Antiques Roadhouse on PBS, and we've all heard the appraisers say something like "Wow this is really a great dresser, you have photographic documentation that Presidents Washington, Lincon, and Reagan have all stowed their underwear inside at one point and time, (It could have been Clinton too, unfortunately you also have photographic evidence that he doesn't wear any underwear), but since some amateur tried to refinish it, I estimate it's value at one cool nickel, Thanks for wasting our time."

OK, so maybe not that drastic. It's not that incredible of an antique and I'm not going to submit the thing to a museum. It's a good piece of furniture for our home, I keep my underwear in it's drawers and I want it to be A: usable and B: decent looking. So I decided to give a go at it and see where the refinishing process took me. 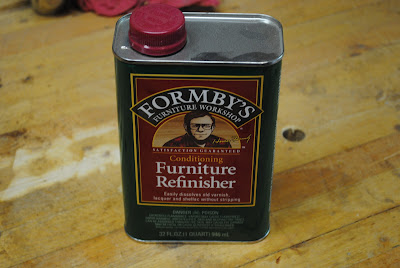 I picked up a quart of Formby's Furniture Refinisher. I had no real experience using it, so maybe I'm naive, but I followed the directions on the can and got some decent results. 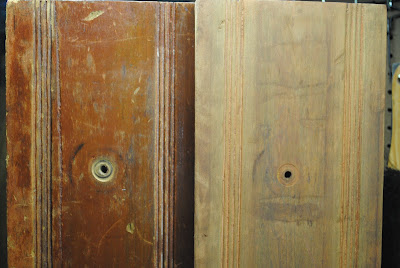 It works more like a dissolving agent instead of a chemical stripper. I've used strippers before and this was different, better. It didn't get me back down to bare wood, but that's not really what I was after. I needed a surface that would take a fresh stain and a new shellac finish over that. All I needed was a light finishing sanding of 180 grit and I was ready for color.

I tried to choose a stain that would be reminiscent of the original finish with a reddish tone, but I also wanted something a bit darker, hopefully that would blend and cover over areas that hadn't "stripped" as well. (stripped for lack of a better word) It comes out very chocolate brown in the pictures but there is a red tone underneath that I like very much. 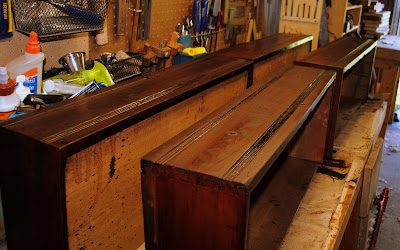 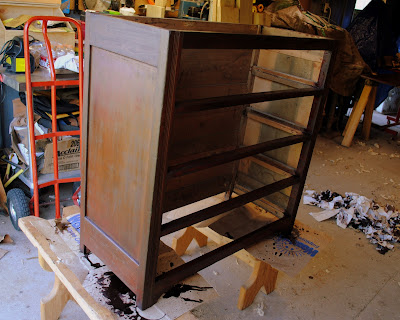 There is one problem, I started this project too late in the season, and by the time the stain had cured and was ready for the shellac finish to go over it. It had grown to cold to apply it, even during most days. I'm a little stuck about what to do with that. I live in an apartment building and I don't think I can get away with applying the shellac at home. I think I will put the pieces back together and bring the dresser home to use for the winter and when the spring warms up again. I'll cart it up and bring it back to the shop to finish the job.

But until that happens, this is it for this project.

Up next, something a little more . . . traditional. 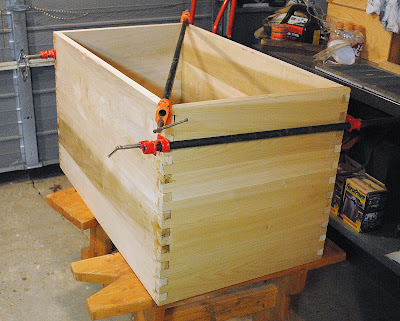