A Sanctuary Of Sorts

It was not an acute anger, one filled with immediacy and a desire to instantly set the world on fire. It was one of those slow boiling fumes, like a layer of lava underneath a delicately thin cooled crust. The heat still radiated outwards as a warning to those nearby but any accidental brush against the shell would break free a small eruption of consuming flare.

Every time I tried to contain myself from unfairly snapping or doing something I knew I would regret I could almost envision the scene in the movie "The Matrix" when Neo flexes his muscles and the hallway bends around him, eventually snapping back and reverberating like a wave moving out from his disturbance of reality. I could almost harness all that power with my willful rage.

It was the fault of nobody in particular. The unfortunate combination of a very restless nights sleep, spending the day working with a very demanding and narcissistic surgeon, getting a very late chance at a lunch break, and a hundred other small jabs or nips at my psyche throughout the day. Things I can normally shake off easily, stuck like glue today, and the load of them weighted me down to the most base version of myself. I was sarcastic and short with my children, I snapped at my wife when she was just trying to tell me some news that only seemed to pile on.

I spent my afternoon being much less than the person I would like to think I am.

I needed to separate myself for a while. A self imposed time out.

I stuffed in a pair of earphones and retreated to the shop. I knew if I tried to accomplish anything constructive it would only end in tears and possibly blood. So I just stood there for a while, my hands on the bench, my head bent down, and my eyes closed. Pearl Jam pouring into my ears as my meditative breaths brought my shop's slightly piney sawdust scent into my nose and my fingertips absently caressed the grain of the bench's timber.

Eventually I picked up my head and started to look around. I'm usually good at keeping my shop clean and organized but I had left out a handful of things. My marking knife and small tri-square absently lying over here. A mallet out of place over there. Some carving chips that had escaped the shop vac strolling around the workbenches legs. My joinery saws had been put away out of order the last time my daughter used them and my off cuts were a mishmash pile of chaos. 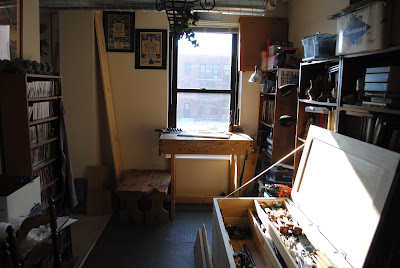 I picked up the marking knife and turned it around in my hands. Its comfortable and familiar weight felt right in  my hands. I inspected the edge and decided it was still sharp and in good shape. I walked over and put the knife carefully back in it's plastic, protective sheath and stowed it away in my tool chest. The tri-square followed as did the mallet. Slowly I just started to pick up and organize the scattering of items I had left about. Finishing by sweeping and vacuuming the floor.  It took me less than a half hour and when I was done I felt better, not perfect but better.

I found my wife and apologized, I also apologized to my girls. Then I started cooking dinner, something everyone likes, Alfredo noodles and meatballs. While I was boiling the Penne I thought about a passage I remembered from "The Anarchist's Tool Chest." and after supper I had to go and look it up.

"When I am too exhausted , ill, or busy to work in my shop, I will shuffle down the stairs to my 15' x 25' workshop and simply stand there for a few minutes with my hands on my tools."

Today is over and I'm putting it where it belongs, behind me. Tomorrow will probably be better, but if it isn't at least I'm lucky enough to have a sanctuary where I can reset my psyche to equilibrium.

Now that I've shared way more than I probably should I'm going to go, before I confess the secret recipe for my wife's famous "Six Pound Cookies."