The Importance of Being Busy.

I had big plans for this summer, I had a list as long as my arm of things I wanted to accomplish. I planned to be really busy. On the itinerary was at least a spice chest, a joined stool built right from the tree, and most importantly I wanted to build a carved and joined chest for my oldest daughter Chloe's 16th birthday coming in November.

These things are still all on the itinerary, I may have to modify the order but I will get them done, but things may take longer than I planned for two reasons, one good and one not so good. 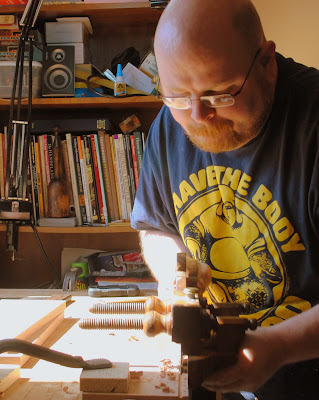 The good reason is the best reason I can imagine. I have been approached by several people this spring to make something for them, I have built things for friends and family in the past, I've done for friends of friends but that's the extent of my reach. But recently I've been fielding emails and requests for pieces from across the country. An insanely humbling experience.
By far the most popular item has been carved boxes in the form of a Wine Ceremony Box for people's wedding nuptials. It's an honor to be a part of something special in people's lives. I never would have guessed my woodworking adventure would take me here. I do believe that's the definition of adventure though.
So starting my way down the path of a new Wine Ceremony Box has been my most recent endeavor. This one is designed to hold just a single bottle and the pair of accompanying letters. 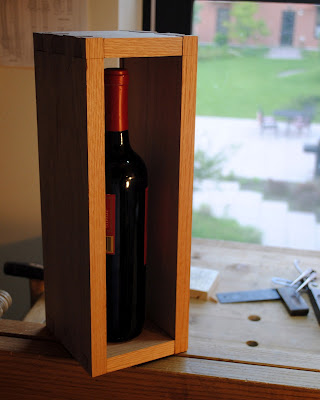 The sides of the box are a little narrow to get a good carving into so I opted to carve the lid and the front panel, and a little something extra. 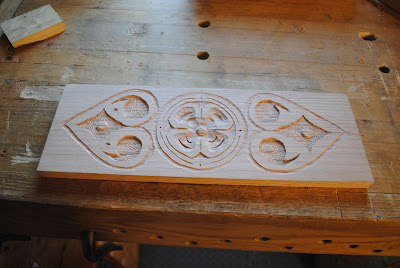 The lid of the box was fun. The twin heart motif has been a popular theme for these weddings and so I carved another variation on that theme. Simpler this time because of the narrower space to work with but I worked in a new center medallion. Of course my ideas come from historical pieces or some of the reproduction work I see from Follansbee. I find joy in mixing the elements together in my own take on a design.

I have seen several takes on a repeating series of interwoven circles in historical pieces. This past weekend I visited a great museum and got some close up looks at a couple of 16th century wainscot chairs from across the pond. One of them used a version of the chain across one rail of the back 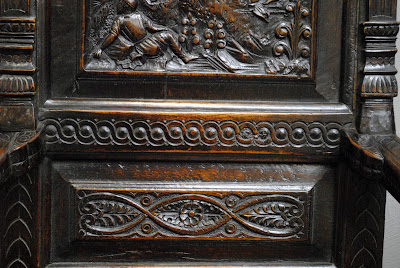 It was something I wanted to try for a while, finally I decided it was time to go for it. 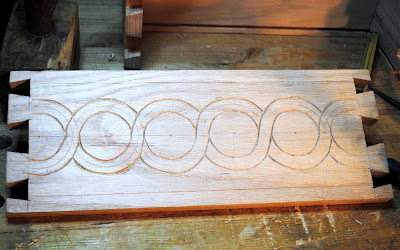 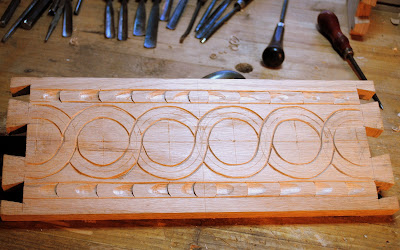 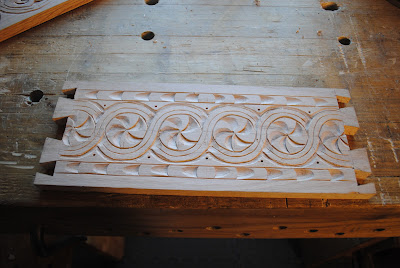 The client for this box had an unusual request, an idea that I found intriguing. They are getting married in Florida, on a beach, and she wanted something representing the ocean carved on the inside of the box. My carving is typically very geometric but I wanted to make her happy. Its for her wedding after all. I pondered something with waves or sunshine and eventually was struck by an inspired thought.

I was cruising the internet and stumbled on a new blog (new for me to find at least) Mary May is a fantastic artisan, I've watched her "Woodwrights Shop" episode a dozen times as I've been studying to expand my experience into acanthus leaves and similar endeavors from. I began to read my way through her writing and pictures and found a post covering carved Newport shells. A shell is an excellent representation of the ocean.

I was unsure if I could pull it off but time is becoming of the essence and I decided to move forward. I carved my own take on the shell form and in the end was pleased with the results. I hope my client is as well. 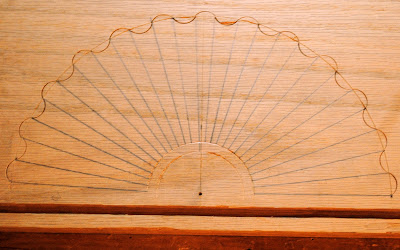 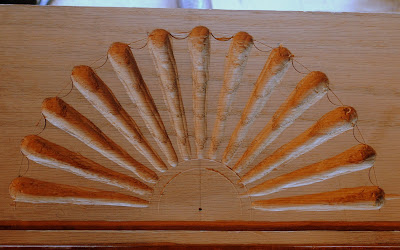 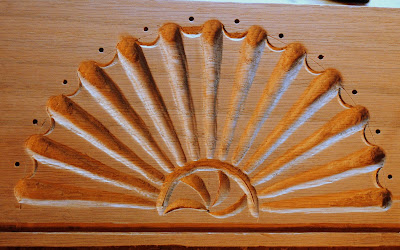 I did realize I am going to have to expand my range of gouge sizes if I want to continue down this path. Bigger sweeps will be necessary.

I finished up this evening by gluing up the dovetails and in the morning I'll get the piece sanded and the lid attached. A couple days of finishing, some final pictures, and the piece will be moving its way through the mail to a new home.

So if you might be wondering what the not so good news is that's going to slow my progress this summer. This Friday I will be having surgery to reconstruct a new Anterior Cruciate Ligament in my left knee (among some other various collateral damage from the injury) With all the needed work I will probably end up in a state of non weight bearing for up to six weeks. That will put a damper on my bench time for a while.

I want any clients out there reading this to know that I have planned for this surgery and if you have made a down payment for a piece, it is already on the way out or will be early next week. (I can still apply finish on crutches). If you are thinking about ordering a piece or we have been discussing it but no money has exchange hands, then I will include my recovery time in the estimate when that happens.