Evolution Of An Idea.

The process of creating something has always been fascinating to me. Sometimes you struggle and fight with an idea for a while before sweat and hard work let you eek out a solution. Sometimes an idea just strikes you from sideways and it's like bringing your head up above water. The previous is a can be a significant amount of work and the later seems to come unbidden from no where.

I had a box to carve and a short time to do it, but I wasn't sure where I wanted to go with the carving. I knew I wanted to play more with a guiloche design, a series of circle shapes interwoven with each other, and I thought I would do that along the front of the box like I had on this version. 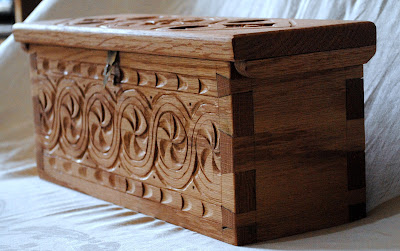 I was struggling more with the panel style carving for the lid. I wasn't sure which direction to go.

Then the Greek Muses struck at a crazy moment. One of my wife's great uncles had passed away at ripe old age of 97 and we went to attend the funeral. It was held in a wonderfully old, ornate Lutheran church in La Crosse. As we sat throughout the ceremony I spent some time looking at the architectural elements surrounding the altar. Running in a great arch was a guilloche. I went back after the ceremony was over and snapped some pictures with my cell phone. 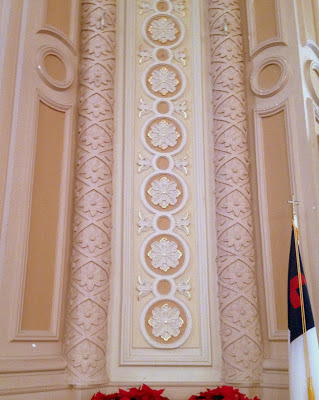 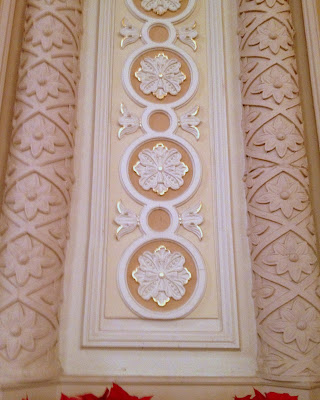 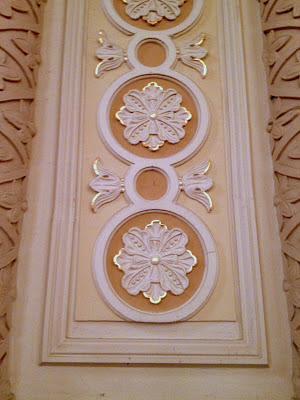 After the ceremony, the family gathered for a light lunch and some time to visit and catch up in the churches basement. As I was looking at the design an idea had started to formulate in my mind about using the guilloche for the panel instead of the front. I didn't have my trusty sketchbook with, even though it follows me nearly everywhere. Thank goodness the little church ladies who helped make the sandwiches and pour the coffee had put out paper place-mats for everyone.

Here's a picture of the sketch I made on my place-mat. 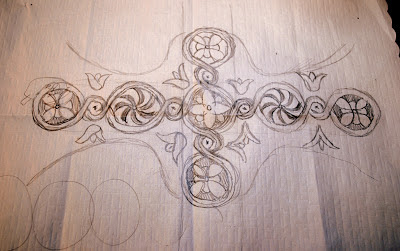 I folded the paper up and put it in my pocket and I let it percolate in my mind for a couple days until it was finally time to build the box. 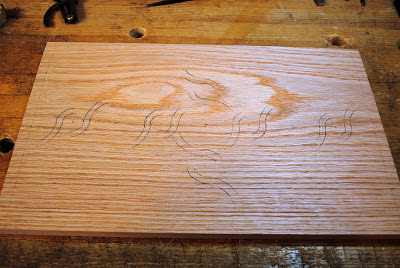 I start the layout using a couple pairs of dividers to scratch marks in the oaks smooth planed surface. One divider is set to the larger circles and one to the smaller circles. First I scribe a series of circles whose lines just touch along the marked axis. Then I adjust both sets of dividers to make slightly larger scratches around the first series.

After this is done I again adjust the dividers slightly smaller than the first series of circles and scratch marks inside. This puts the first series of scratches in the middle of the thicker overlapping wall.  It's tough to explain in words, if you already carve then my description might help, I should just film a video to help explain it. 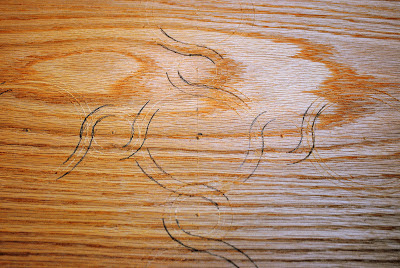 I know Peter Follansbee has banished the scourge of pencils from the shop he works from (at least where his period work is concerned) but I find the thin lead from a mechanical pencil helps keep me on track of which line is crossing over the other. (it also helps the layout scratches show up in the photograph.) 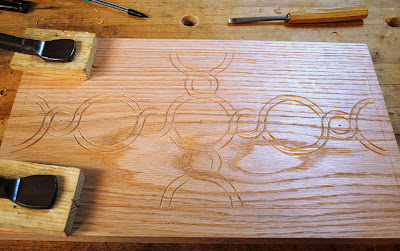 The hard part of the layout work is done. Now I just have hit the oak with a "V" chisel and the process has begun. 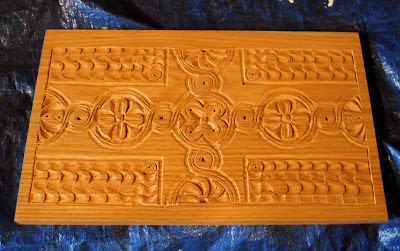 I really got fixated into the carving that afternoon and I forgot to take any process pictures until the panel was done. The flowers in the circles are all gouge work as is the design that ended up in the corners. Personally I feel like the corners is where this one fell apart on me. I really failed to plan well for them and though I think what developed there on a "spur of the moment" idea is interesting and has a balancing movement to it I think I could have done something better. I wanted to do something like the two columns that flank the original I saw in the church but the space wasn't right for a couple ribbon bands either.

I was very happy with the guilloche and how all the detail in there worked out, looking at it now I feel I could have done something more with them smaller circles, but I do believe the enemy of good is better. I usually try to stop while I'm ahead. 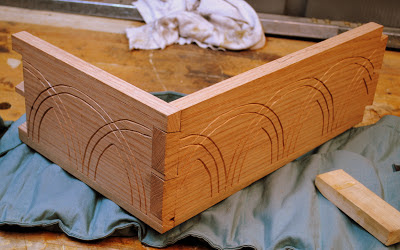 As I do more of these boxes I am building a better sense of balance and style to the carvings. I get the feeling you can overwhelm a piece with too much of the same shape. Maybe this wasn't a concern in the 17th century where this style of carving would be more at home, but I am building in the 21st century for clients with a modern eye.

As I read that I think it can be misconstrued that I'm saying I have to dumb things down for a typical modern person to appreciate. I am not saying that. I am trying to say that while I am using 17th century carving styles and techniques as my platform, I am not interested in imitating or recreating as much as I'm interested in using those things as a springboard to launch me into my own.

The art teacher I spent the most time working with in my misspent youth always stressed the composition of a piece through the use of balance and movement. If there's a busy area you have to even it out with a simpler area or the eyes of the viewer can become overtaxed and overloaded. It's important to me that my work is pleasing to both my eyes and others so I try to incorporate these long ago learned lessons more and more as I get better at this carving thing. 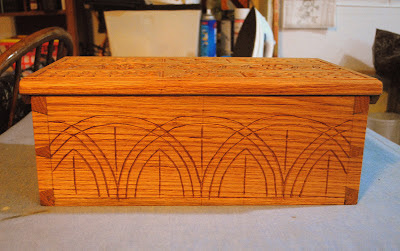 The box was finished with a lightly pigmented Danish Oil. All in all the box went from lumber to piece in around four days. The lid was carved in one evening. It's not as important to me but getting faster is probably a byproduct of comfort and familiarity. I didn't even have time to get very good final pics before I had to deliver it. 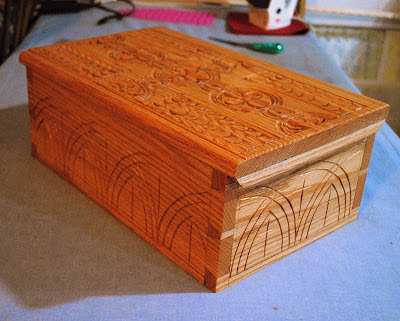 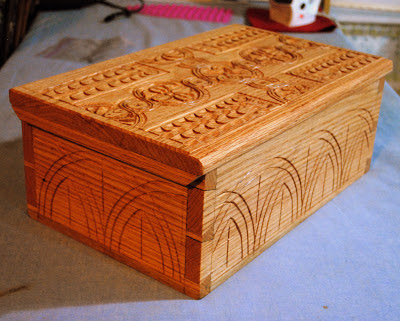 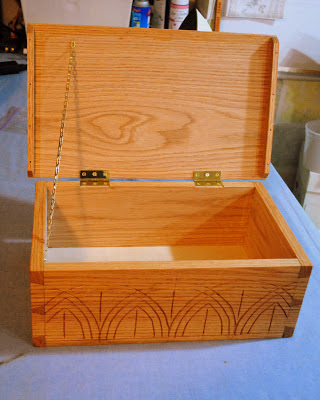 It's funny how things name themselves sometimes. The man I was making this box is the son of a pastor, and he's a very religious man, though not the kind who pushes his views on others. (The right kind in my book) I added the crosses on the front as a kind of a tribute to that. As I finished them up I was amused to find there were seven crosses, something unplanned, the same number as large circles on the top. Gospel stories and parables from my Sunday school days rolled around my head as I was putting the final details and hinges on the box. I started to refer to call it "Seven Times Seventy Loaves"

I've since gone back and reread the things I was thinking about and realize the name is a combination of a couple of stories, but really that's insignificant. I'm not sure I named it at all. I think it was those damned muses again. 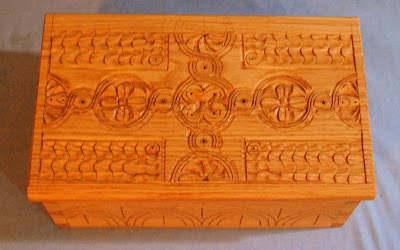 P.S. Those who know me will understand my sense of humor, Originally I had named this post "A-Mused To Death" which I thought was a clever reference to a moment of inspiration striking while at a funeral. I was kind of proud of my brilliance and shared it with my wife, who calmly convinced me it wasn't really in good taste. She's probably right, but I'm still irreverent enough that I couldn't let it go completely. It's probably the same personality fault that made my eighth grade Theology teacher kick me out of her class for most of the year. In the end I guess I am who I am.