The Hardest Decision Can Be To Do Nothing

I've been working away at my Krenov Style wall cabinet and it has been a fun ride so far. The carcass and the doors are finished and glued up. I set them up together to get a feel for the final look. 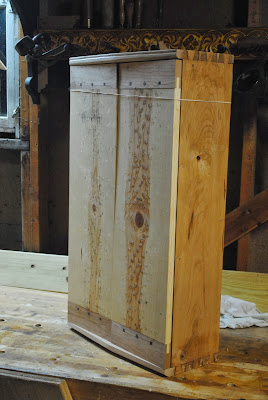 For the back panels I chose to use more of the pine board I'd had for the doors. 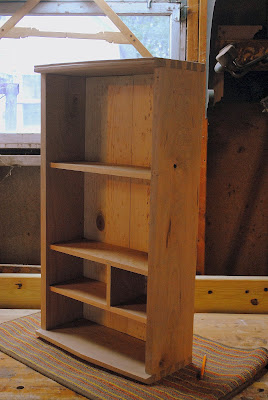 Overall the piece is going together well. Its enjoyable to dabble outside my regular playground and it is moving down the final stretch to finished. That also means it's down to the time where I have to begin making some of the decisions I've been weighing my options on.

The biggest personal debate has been what to do with this. 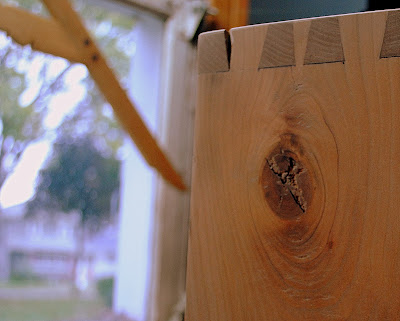 I don't mean the edge of the dovetail where the grain of the board failed me and chipped out. I'll be fixing that. I'm talking about the big knot in the side of the carcass. There's a smaller one on the other side that's had the core fall out already.

Typically I would have planned my carcass around a knot like this and excised it via cross cut handsaw. However it was important to me to get this carcass all from the same board and by the time I laid it all out I had around two inches to spare. Not enough to exclude the knot, so I chose to put it deep enough into a side where it wouldn't interfere with the dovetail joints.

From the get go I've been trying to decide a plan of action to combat the cursed knot. The best idea I had was to cover it with a thicker inlay. a dutchman patch if you will. Similar to what I did here on the left side to cover some very bad chip out that happened making the through mortise. 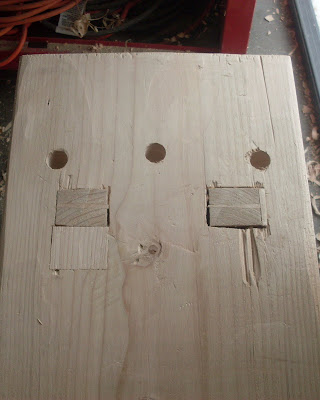 Ultimately I made the decision that can be the hardest, I chose to do nothing. As I sat and pondered the cabinet I came to the realization that the knots are the defining character of this whole piece. From the small ones peppered across the pine doors to this larger one in the carcass, the knots tie the work together.

Covering this knot would cause confusion and disharmony with the grain. Like watching ripples cross the water's surface without the satisfaction of throwing the rock that caused them. Cause and effect are important factors in storytelling, and I think covering or disguising this knot would only interrupt and harm the story this piece tells.