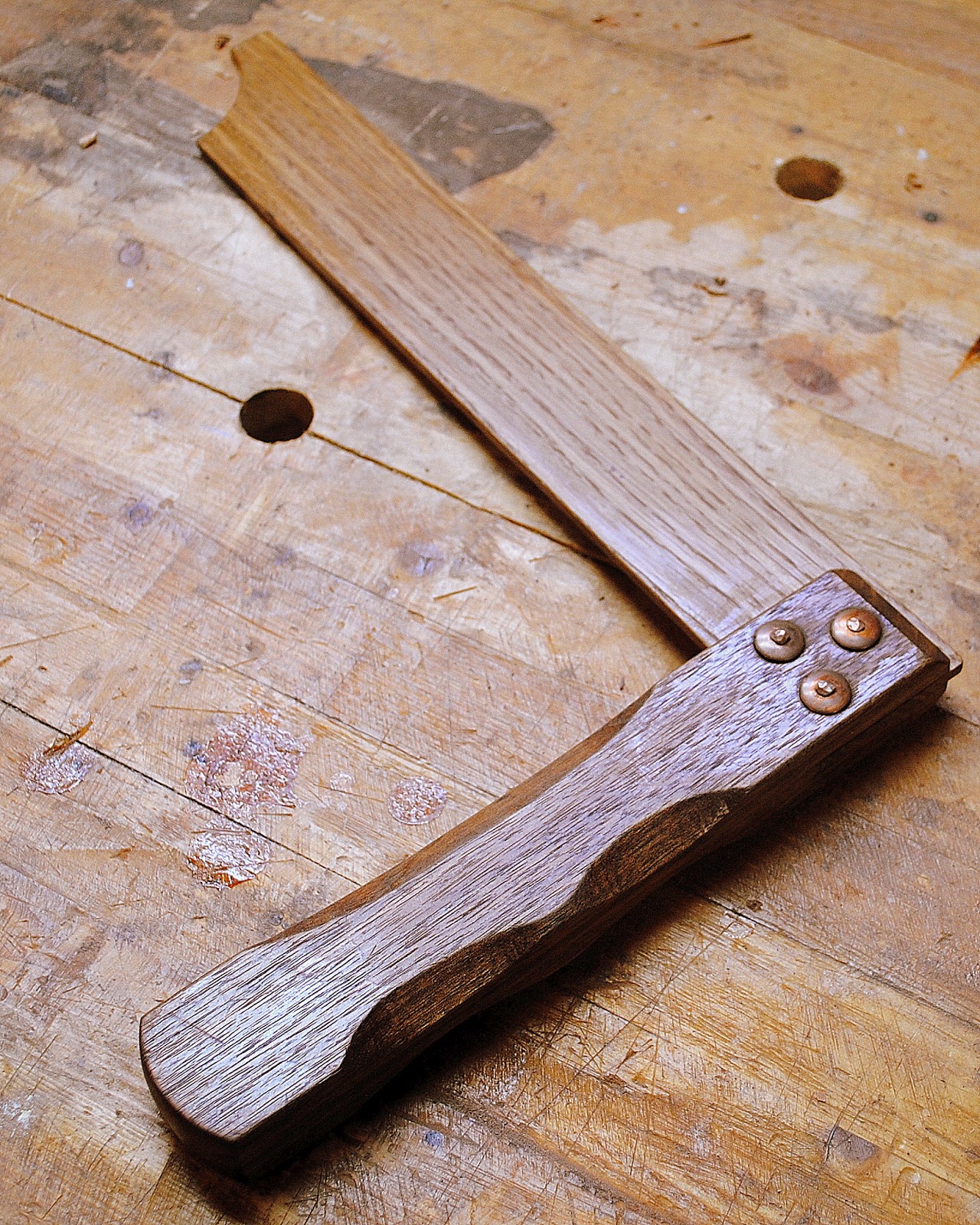 It feels like forever since I've spent real quality time in the shop working on something. Over the winter I joined in the one day shop stool build off and built something a little Roubo for a Popular Woodworking article. In essence it adds up to around four to five shop days since last fall. I needed a little break to recharge my batteries, do some reading and research, and I got that. I'm feeling ready to start rolling and I've banked up a truck full of ideas from here.

But starting again after a break is a little daunting. I haven't meaningfully flexed my shop muscles, mental or physical, in a bit. I wanted to go out and start something in the shop, but I knew I wasn't ready to start a big project yet.

Then the mail arrived, and with it my purchase from the Jim Tolpin Spring Cleaning Tool Sale. A wooden square handmade by the man himself.

As I took it out to the shop and took a few pictures of it I thought about how I hadn't made a wooden square in a couple years. I'd been thinking about the process again lately, but I hadn't taken the time to make any. That changed today and I knew right where to start.

The book "The Tool Chest Of Benjamin Seaton" is fascinating in what it tells you and what it doesn't. The info is all there, but the layout is a little stuffy and it's short on some details I would like to see better. (I still don't understand where the dovetail marker hides in the chest, though the book talks about it quite a bit) The three Try Squares found in the chest are an oddity to my modern eyes. their proportions just seem out of whack on the page, but their joinery is very cool. Double through tenons anyone.

I've wanted to build a full set of three, all the same sizes found in the chest, to see and feel for myself if the proportions look better in real life, and work well for shop layouts. plus it's a chance to flex some muscles again and get the sawdust back under my fingernails.

Recently I got my hands on some good black walnut, more than I needed for the intended project, What I had would be perfect to make a set of Seaton Squares, another A is for Anarchy square, and probably a couple Roubo or Moxon style squares as well. I had the day free and I was itching to do something meaningful in the shop so I threw myself into the process. I went inside and grabbed my copy of the Benjamin Seaton book, took some notes and started off to the races

The caveat is that I was more neglectful of my documentation than usual. I took some photos, but not many. In essence I broke down the walnut into blanks to make the components for the three squares. I used my bandsaw to resaw some walnut down to 1/4" thick for the blades and I planed all my surfaces square and true for both the blades and the beams. 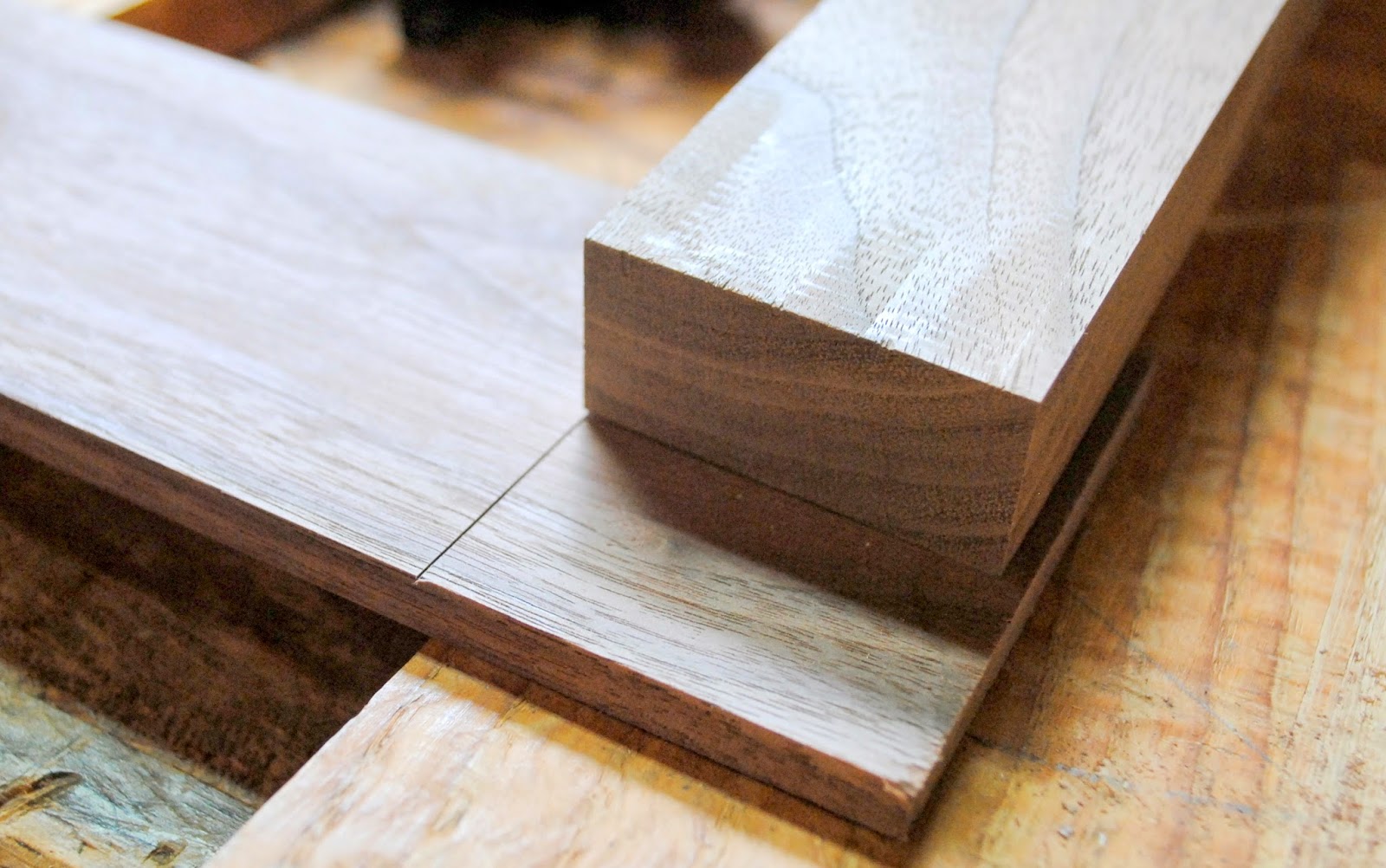 Then I started to layout the joinery between the blade and beam for the smallest of the squares. I knifed a line so the blade would pass about an 1/8" beyond the beam so I could plane it even after assembly. 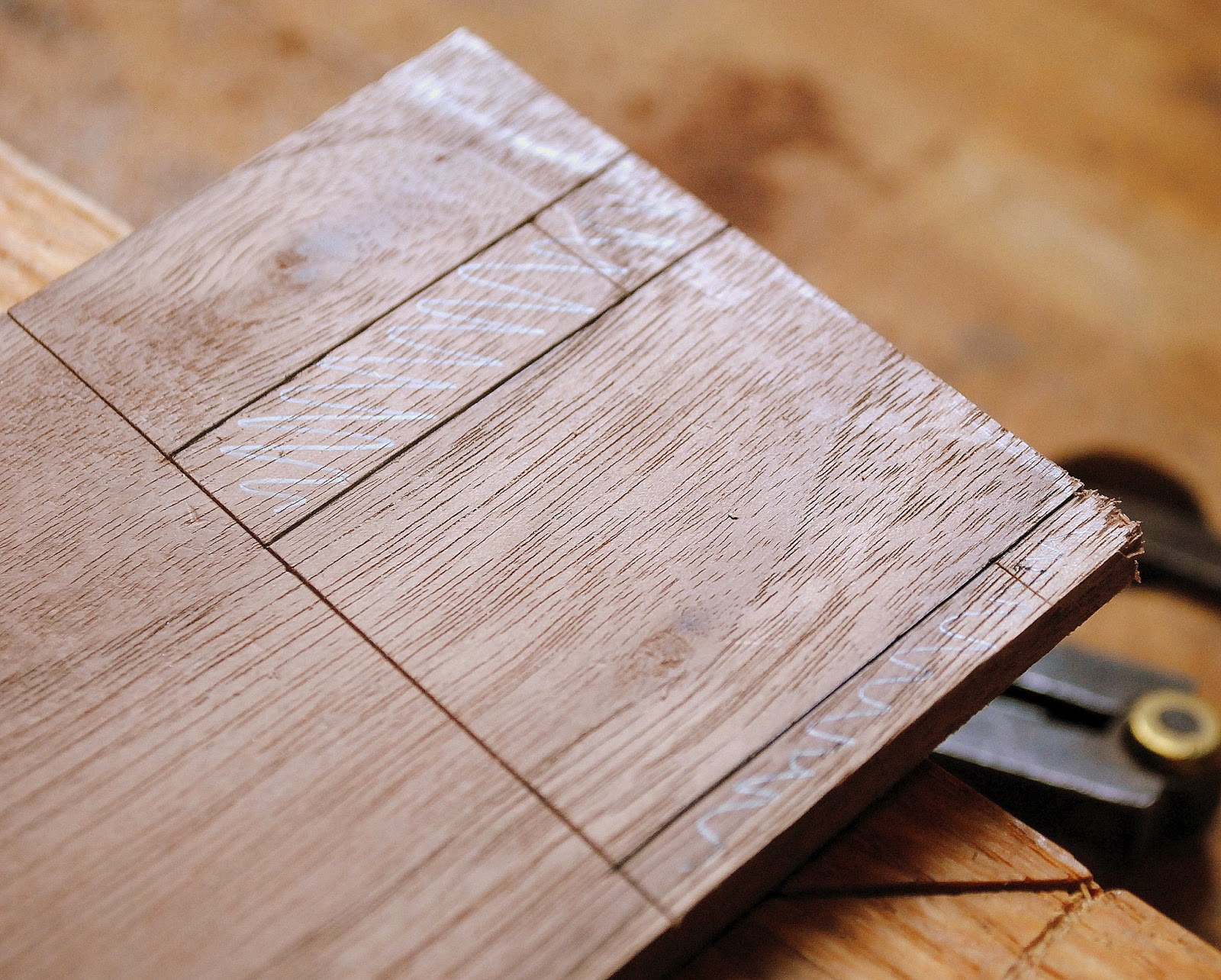 The blade itself is wider than one would think, nearly 3". but the measurements for laying out the twin tenons is not included. The only measurement is the blade sticks out .39 of an inch past the end of the beam. I decided to give some account to planing the blade square after assembly and rounded this number up to 1/2" then doubled it for the amount housed in the blade.

Extrapolating from that I sized the gap between the tenons at around a 1/2" and the housing cut to hide the mortise on the inside of the blade at 1/4". 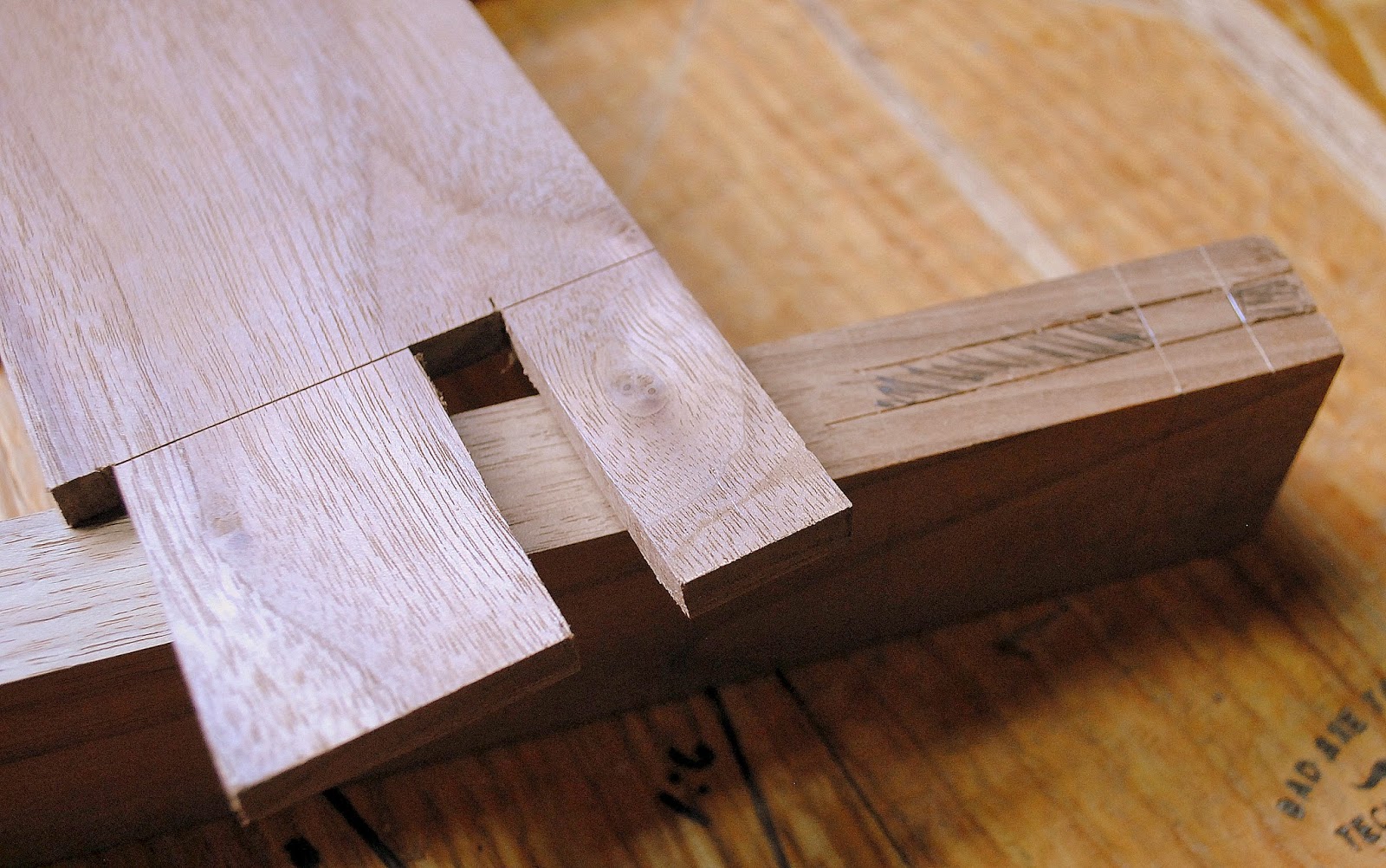 I laid out the cuts and sawed them out like I would a dovetail. Then I used the tenons to mark out for my mortises. 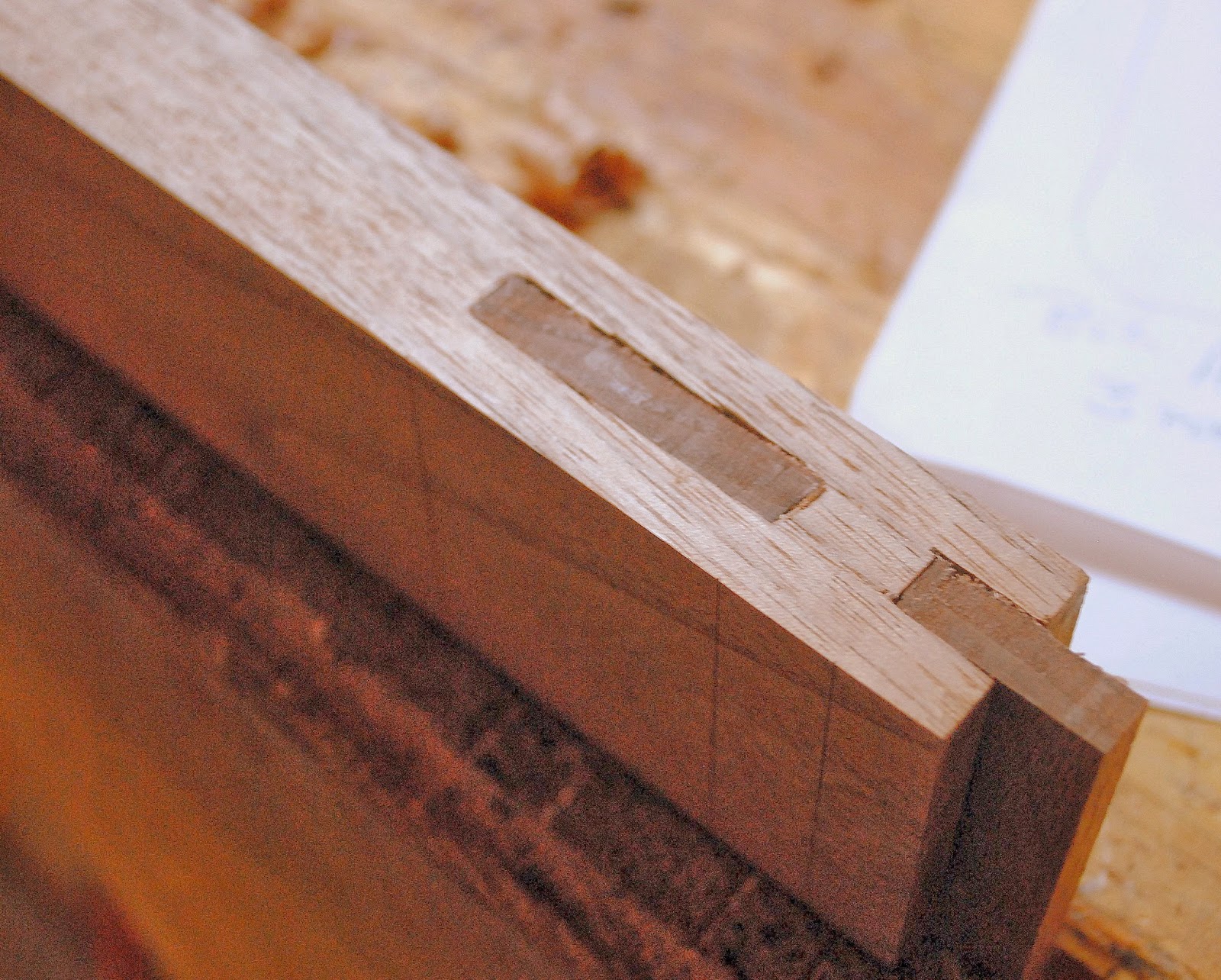 I hadn't realized how long it's been since I've chopped out a mortise by hand. Any larger mortises I've made in the last few years I've drilled out first. It went very well, slowly, but very well. In the end I got the tight fit I needed and in my excitement I banged the glade home solidly, to the point where taking it apart would most likely destroy it.

So I planed down the proud ends and pondered my options. I'd banged the sucker home before I'd applied any glue. Sure it was a tight fit and would hold fine, but a square that develops a wiggle in the blade is no good to anyone. So I went off script a little.

I made three pins from pine, thinking the lighter wood would be a nice accent. I drilled three holes through the beam and blade and I glued those pins in place and trimmed them flush. Now I had to cut my chamfer on three sides of the beam with the blade in place. 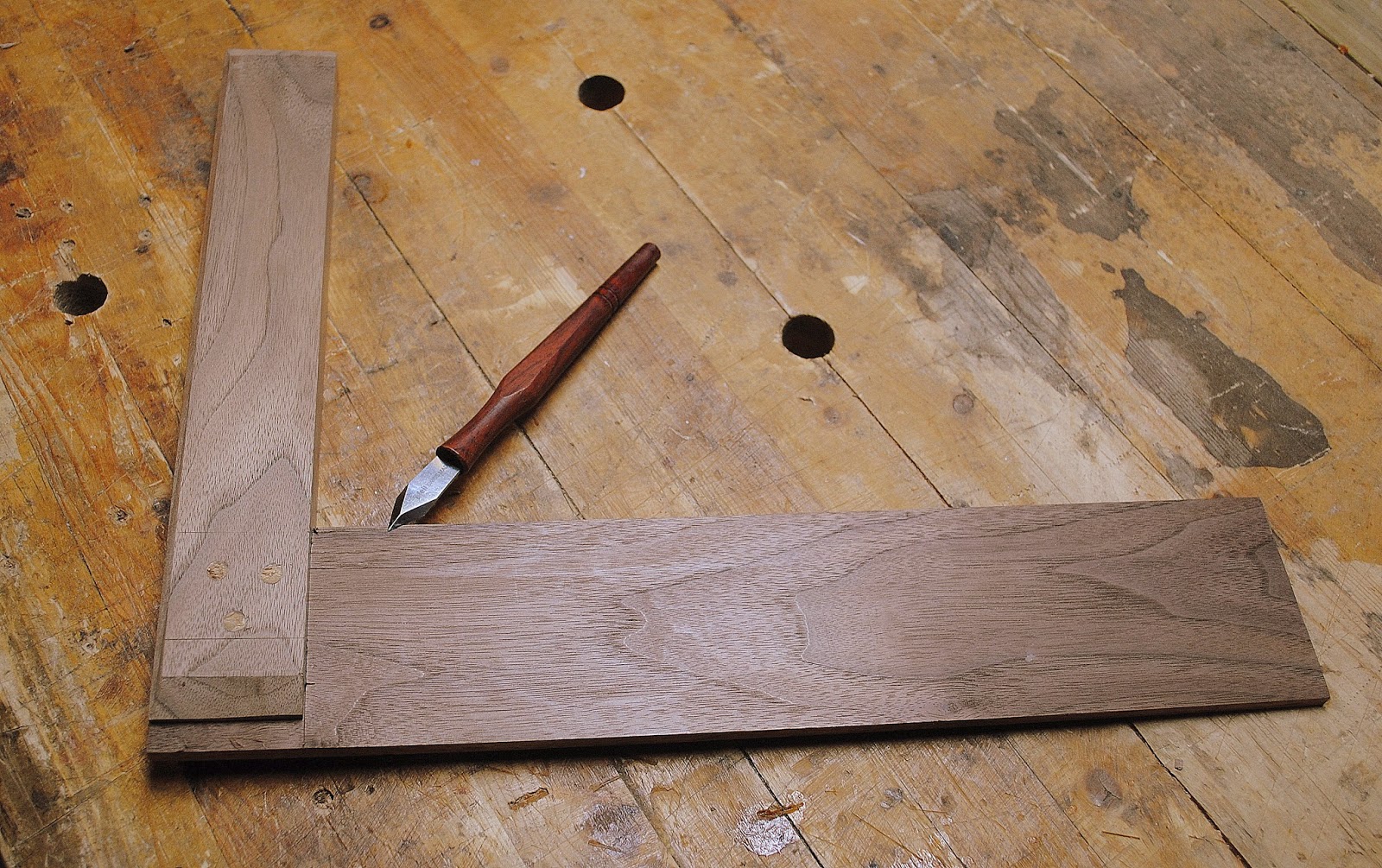 I cut the end grain chamfers with a paring chisel and the long grain with a block plane. By then I had to pick up and wrap up for the day. Chores to do don't you know. but tomorrow I'll square up the blade to the beam and have the smallest of the Seaton Squares done. Then it's on to momma bear and pappa bear.

This is feeling good.

Anyone want a set?