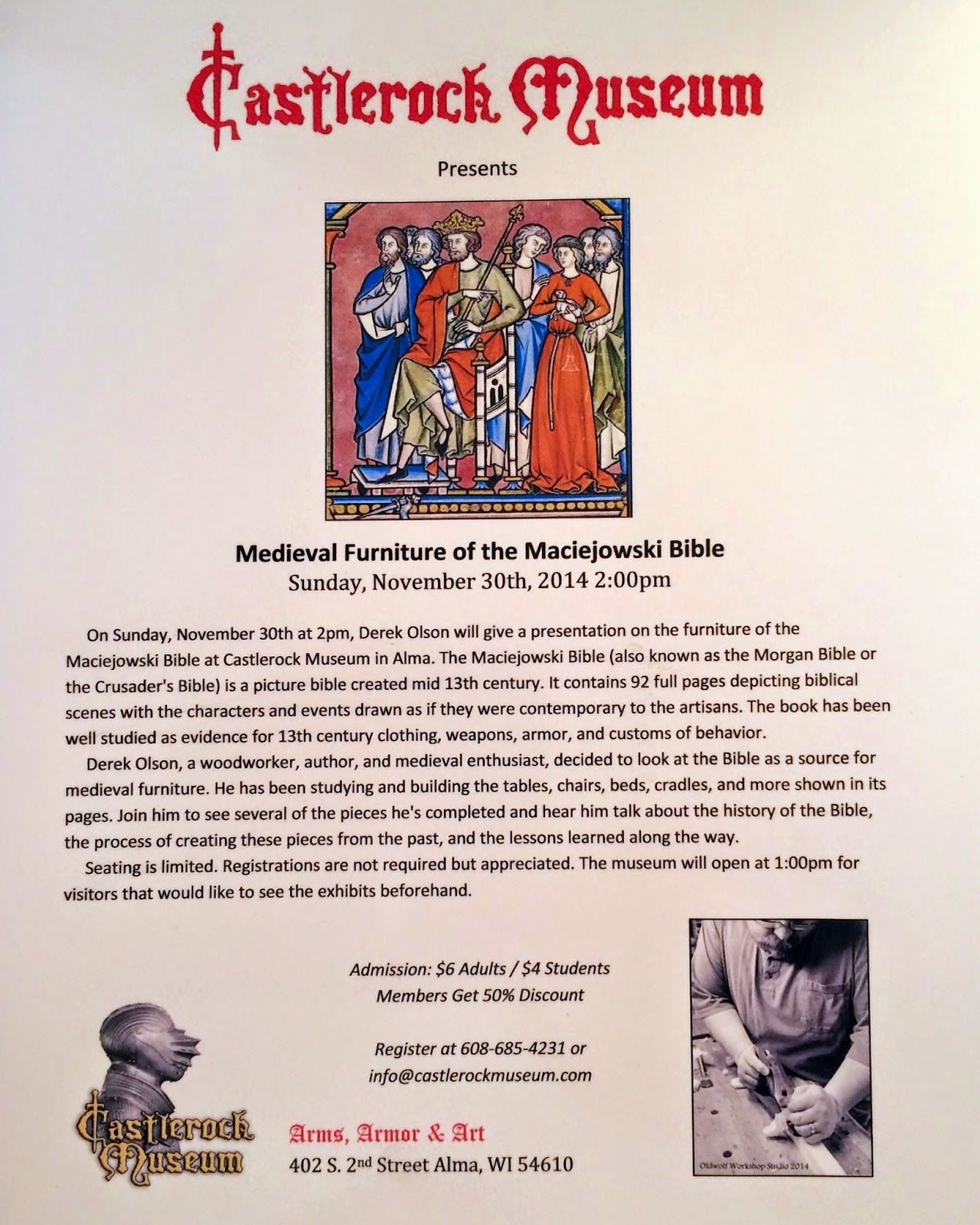 "Even the furniture of the fifteenth century - rude as it appears to us - was an advance on that of the thirteenth, when goods and chattels were preserved in "dug outs," or chests roughly hewn out of the solid, and chairs were luxuries for kings alone."

This is from a book first published in 1909, written by a pair of Master Cabinetmakers in Great Britain (The honors they each list in the title page read impressively, though I don't fully understand their merit or significance, There is more information HERE). The way the words present, shrugging off the 13th century as a crude and ugly time in European history. 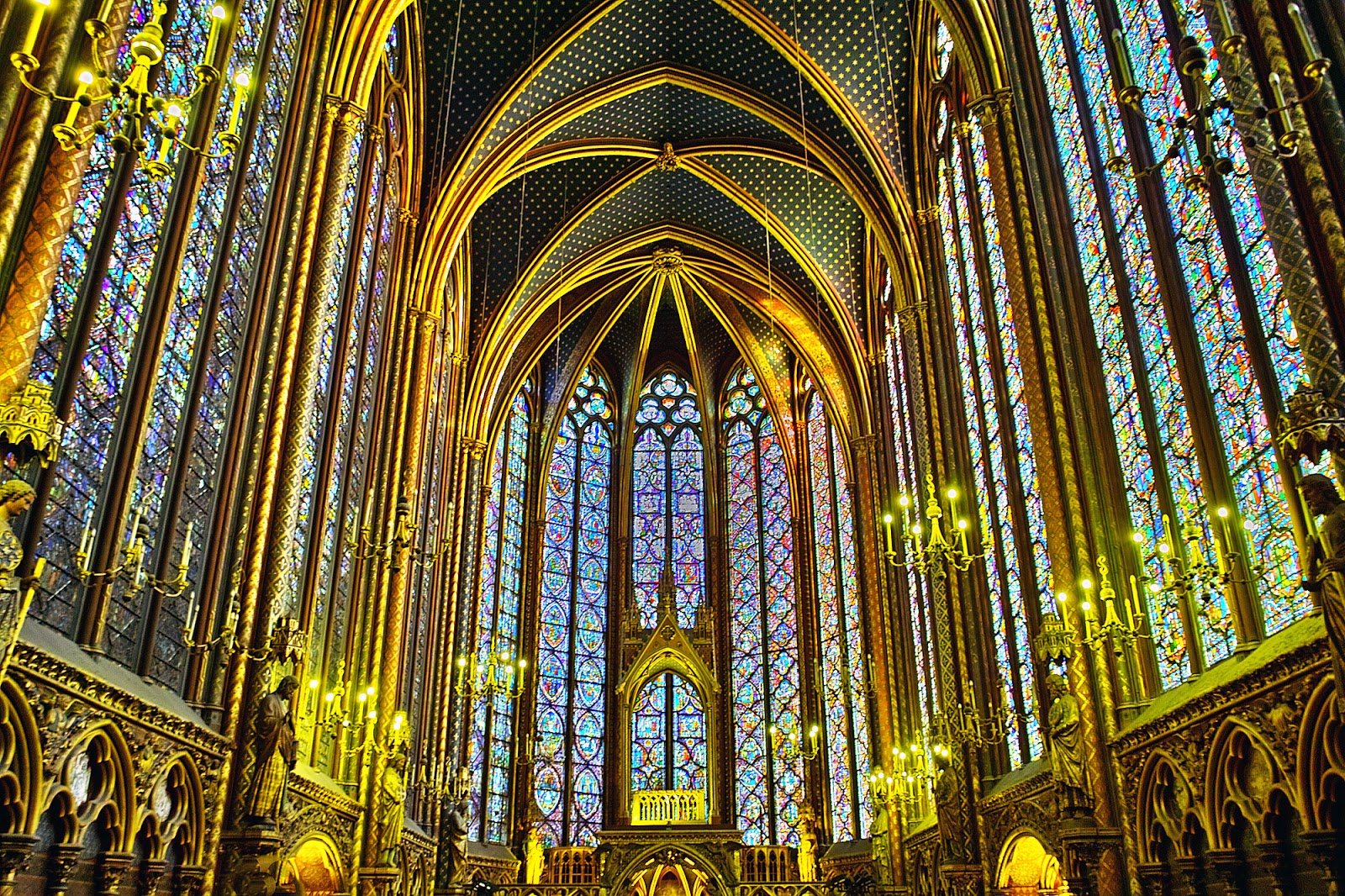 I present to you the Sainte Chapelle, constructed in the early 13th c, at the behest of King Louie IX. I will grant this is the creme of the crop, but even the photos of it are breathtaking and to write that magnificent structures of beautiful architecture sit blatantly alongside crude dug out tree trunks in the next room are broad brush strokes of folly.

There was not a mythical lone day in the fifteenth century when a beam of sunshine lit down from the heavens and all the joiners and cabinetmakers looked up from the chunk of firewood they were diligently hollowing out and realized they could do so much more.

This common belief, about the "darkness" of the dark ages, is something I have always disliked. If you just look at the material record left behind you can see great works of intelligence, ingenuity, artistic ability, and masterful technique. The technology was different, more manual than CNC or 3D printing, but it was more honed and refined finer than many things I see created today. I have spent many years of medieval reenactment discovering this for myself and then trying to open other's eyes to this truth and sometimes succeeding.

And to anyone who calls the furniture fashions of the 15th century "rude" well that sounds uneducated to me as well. Proof to my regular statement that the smarter you are, the dumber you are.

This has been the underlying reason I've wanted to write a book about medieval furniture. I want a role in expanding how people think about this time period and giving some respect to the great things that have come before them. My wife has told me I have an overdeveloped sense of history, but there is a passion for it inside me. I spent years digging for photos and records of furniture that survived 800 to 1000 years on a continent that has seen more than its share of turmoil and war, including the main stage of two great wars, and a cultural predisposition to cast away yesterday for what's shiny and new today. (Different than Eastern culture's reverence for ancestry and tradition alongside the new) and constantly emerged frustrated.

My aha moment in this quest was deciding to stop trying to find my evidence in museums and look to the "photographic" record of the time. The artwork produced, especially books of hours, illuminated manuscripts and miniatures. The Maciejowski is one of the most detailed and fantastic records of the time. Well studied for a variety of things and it shocked me as I searched to see if anyone had studied it for the furniture shown and I couldn't find anything comprehensive.

I had my muse and I've spent hours researching, and drawing, and building. Just to get to the point of really understanding the scope enough to talk about it. 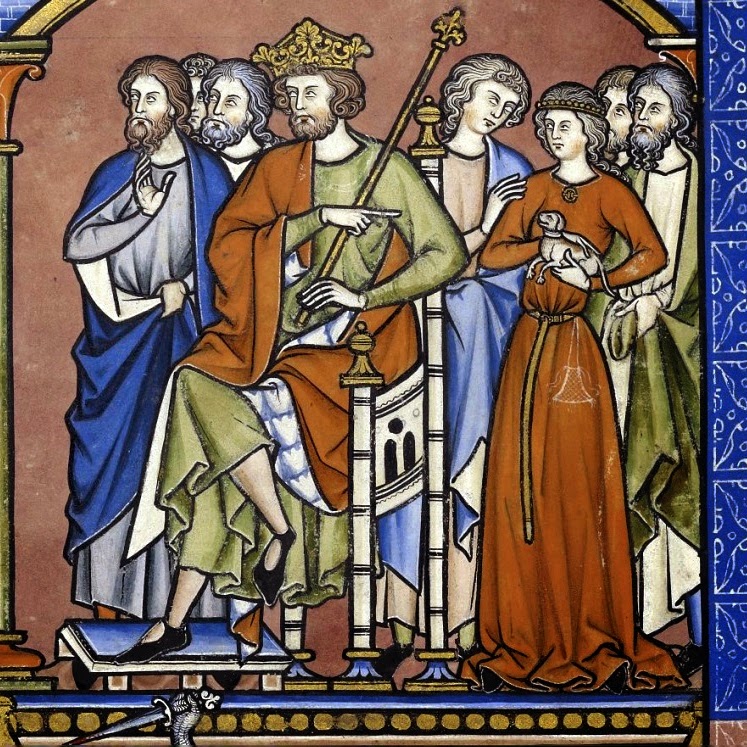 My first public presentation of the material and information I've gathered will be this coming Sunday and 2pm at the Castlerock Museum of Arms and Armor in Alma Wisconsin. I hope to see you there.

When I first pitched this program to the museum, just shy of a year ago, I thought I would be further along with this project than I am, no surprise that life gets in the way of progress. In my minds eye I had most of the pieces built and finished, but in the end it's more important to get the pieces done CORRECTLY than to just get them done.

It's difficult to pre-judge the reception a lecture or presentation you've never given before, but I have worked harder on this one than I ever have before. The subject is fascinating and I hope to do it justice. To add a second level of pressure, I hope to use a video of this lecture as bait to lure a publisher into agreeing this is research and a subject that needs to be shared.

Now, back to work on my powerpoints.