It has been a while since I full out chronicled a build here on the blog. I think it's long past due. I stopped because there's parts to every project that are the same. Milling stock, cutting dovetails, gluing up carcasses . . . and it gets challenging to write about the same things for every build and make it sound and feel new, but lets give it a try again.

I decided to build a nail cabinet. The Schwarz got to me again. I had the pine I needed laying around the shop and I've been trying to do things that will use up some of my excess stock and unburden my garage shop a bit. Besides the new shop deserved a nice place to store nails, screws, and other errata. 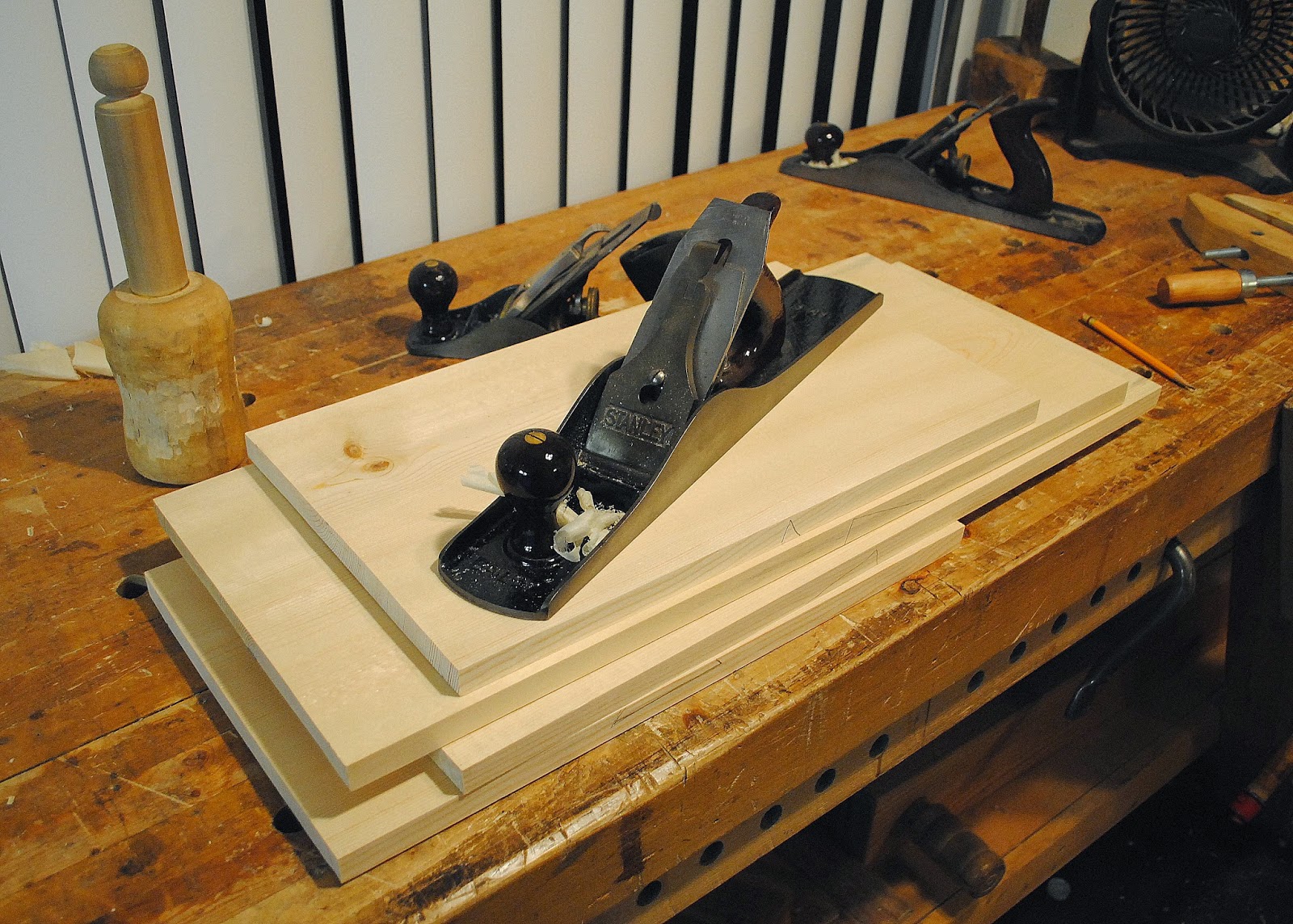 Typically I'm not much of a "measured drawing and cut list" kind of guy. I try and follow where the piece takes me and this time would be no real exception, though I do have the look and over all dimensions within reason of the original. I started with some nice wide white pine stock and milled and flattened the base carcass to dimensions.

One of the things I wasn't anticipating was the over all size of this cabinet once it existed in space. It looks a little diminutive in the photos, hanging over Roy's and Chris's benches. Reading dimensions on paper and seeing dimensions sitting on your bench top are two different things. 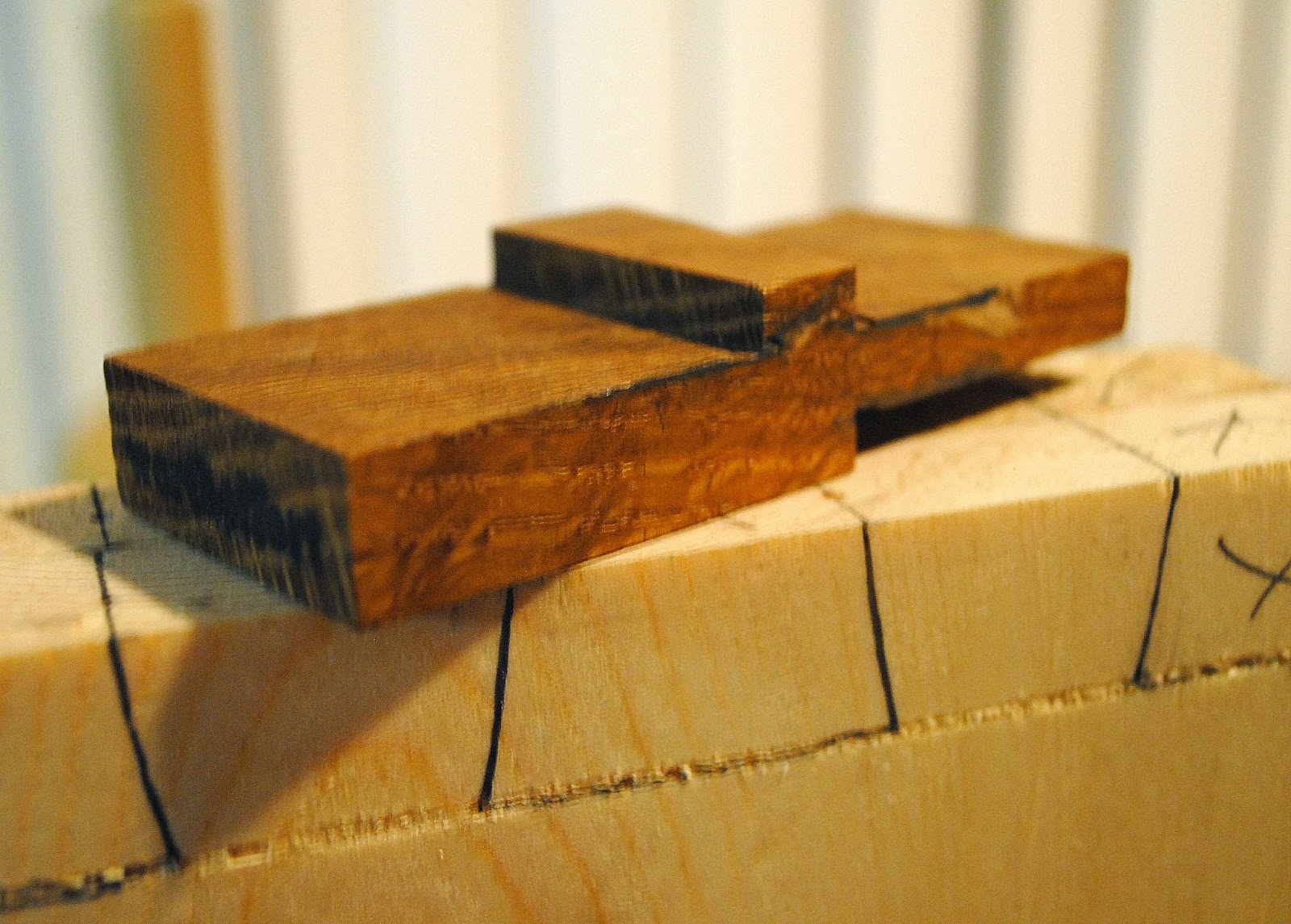 Over this last summer I had the chance to kick in a few bucks for a Kickstarter campaign to support a woodworking school called Worth The Effort down in Austin Texas. Shawn Graham is a great guy to interact with on social media and I was happy to do my part, with or without a reward.

But one of the reward offerings was a dovetail marker made by the school. Now I've never used a dedicated dovetail marker before. I've always used a sliding bevel gauge if it mattered and just cut the slope by eye when it didn't, but I thought it'd be nice to try. (who knows it might lead to my purchase of one from Sterling Tool Works, those are very nice)

I have found the gauge useful for someone who cuts a lot of dovetails, and I am someone who cuts a lot of dovetails. I always thought owning one would be one more thing to knock around in the tool chest and not use, (more on that soon) but I've revised that thinking. The only complaint I have is the angle of the tails on this gauge is a a little standard and milk toast to my eyes. I guess I like my dovetail slopes extra slopey. 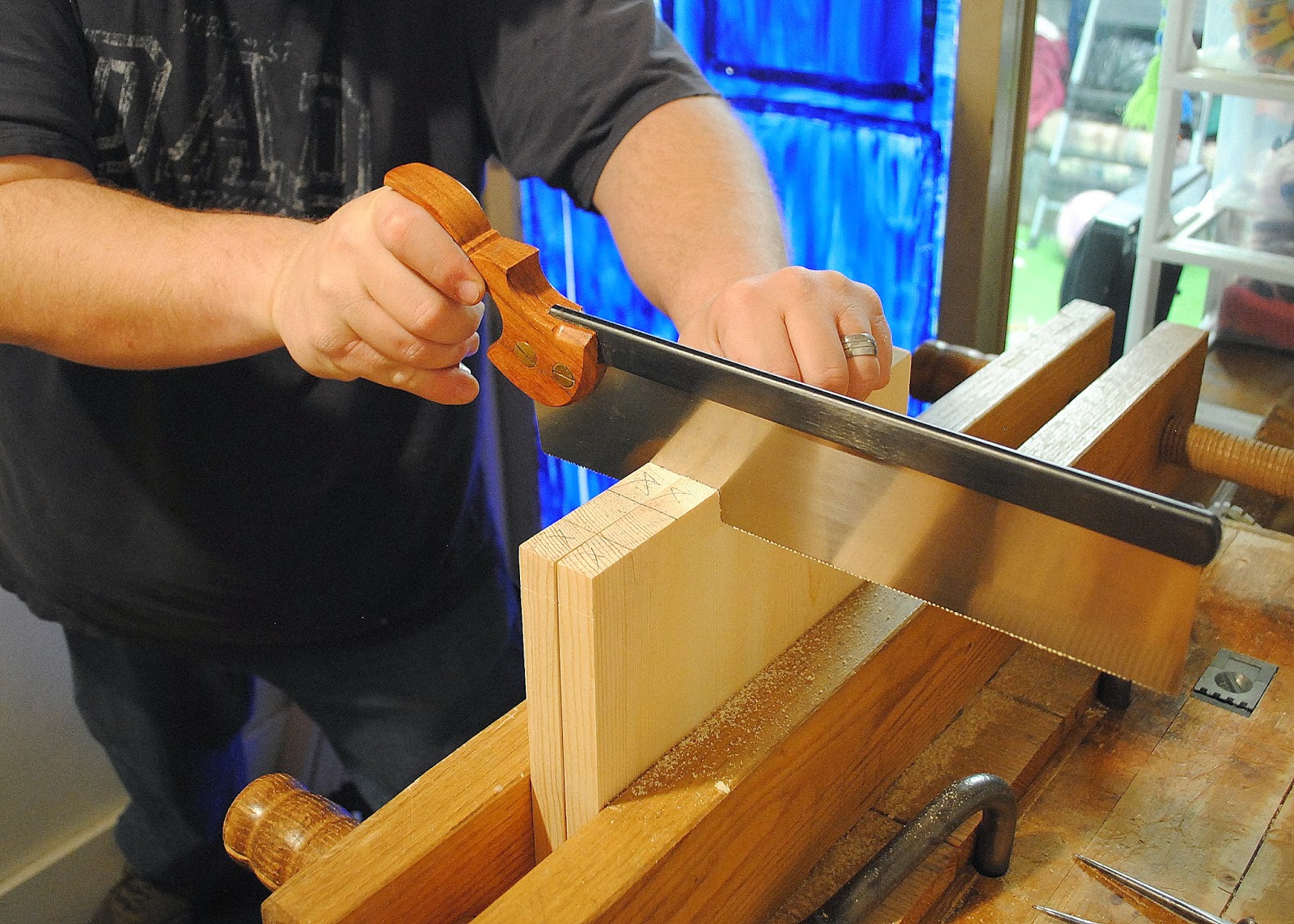 One other thing I've noticed in my photos lately is my hand position has changed when I'm sawing. I start in a finger out, proper technique hold, but once the kerf is set my hand shifts to this relaxed pose that puts more meat behind the handle.

I'm not sure if it's laziness moving towards sloppy technique or just a modified hold that's developed organically. It doesn't seem to be detrimental to the outcome so I should probably stop over-analyzing it. 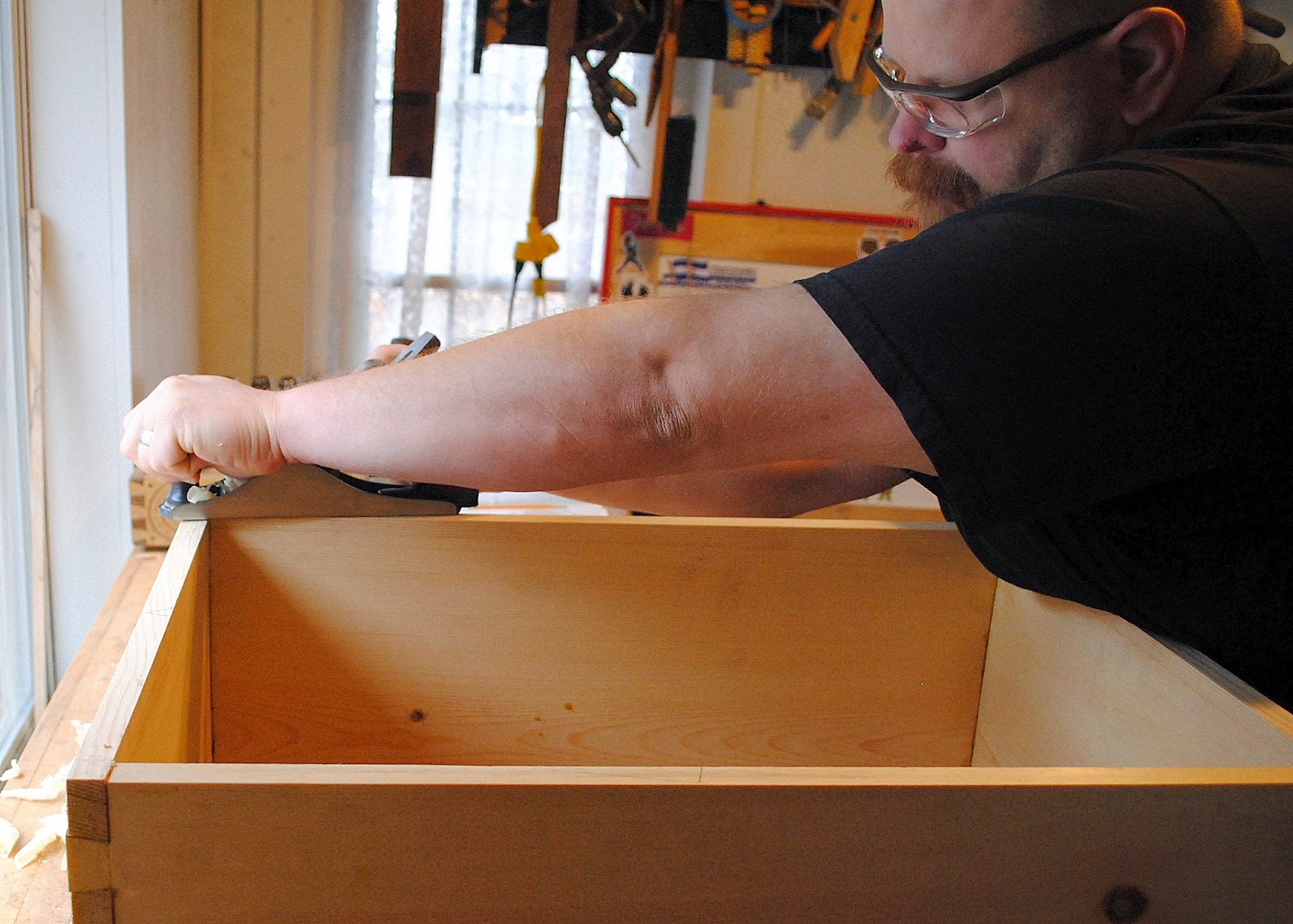 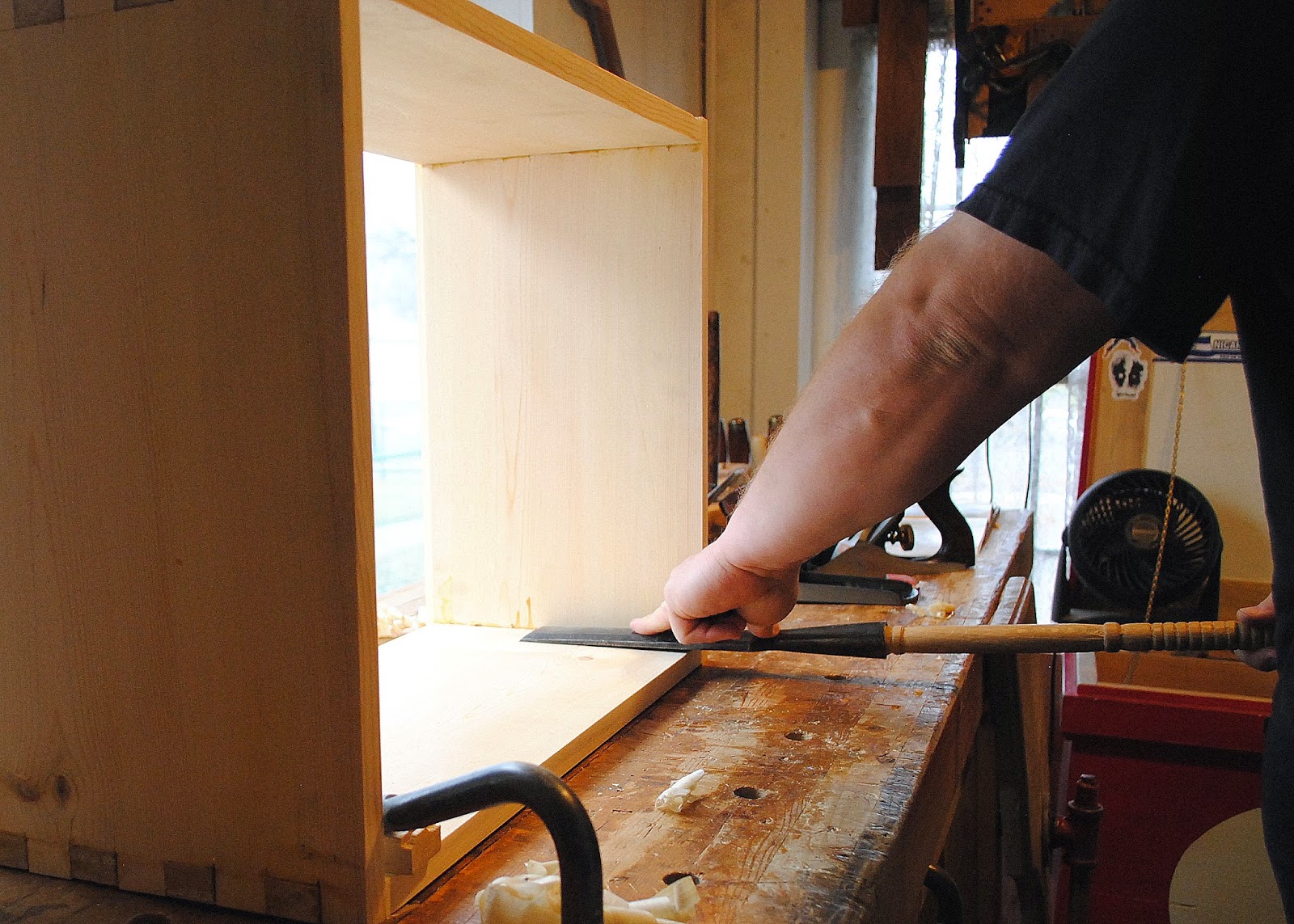 Scraping up dried squeeze out on the outside of the carcass is easy. It's those inner corners that drive me bonkers. I used to pare at them with a bench chisel (and still do sometimes) but on deep pieces I would end up bumping and scraping my knuckles (and that gets old fast) or ding up the front of the carcass with the chisel's socket or ferrule.

So I started using my slick. I know it's not a true slick with a four inch wide blade. Mine is around two inches wide with a socket that's offset to allow it to pare flat. I got a pair of these in an old tool chest given to me by my Father In Law and they work well. 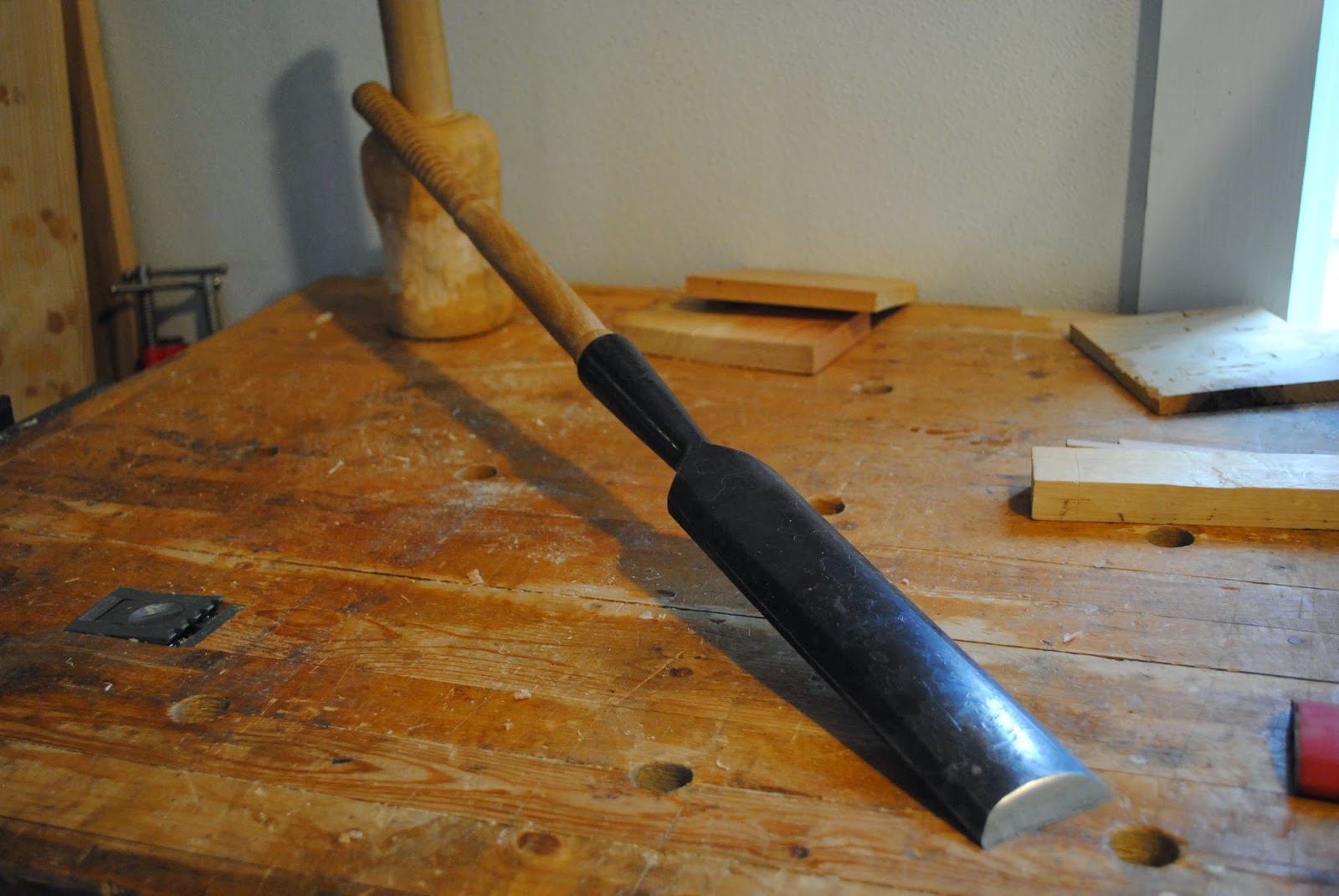 I turned a couple long handles for them, They are each right about two foot long and that long handle gives an incredibly subtle amount of control. I flatten tenons with them and use them like you see above. I think the bevel of the cut is still a little obtuse yet but it's a lot of steel to remove to refine it quickly so I'm fixing it incrementally, sharpening by sharpening, and when I creep up on dialed in, I'll know it. 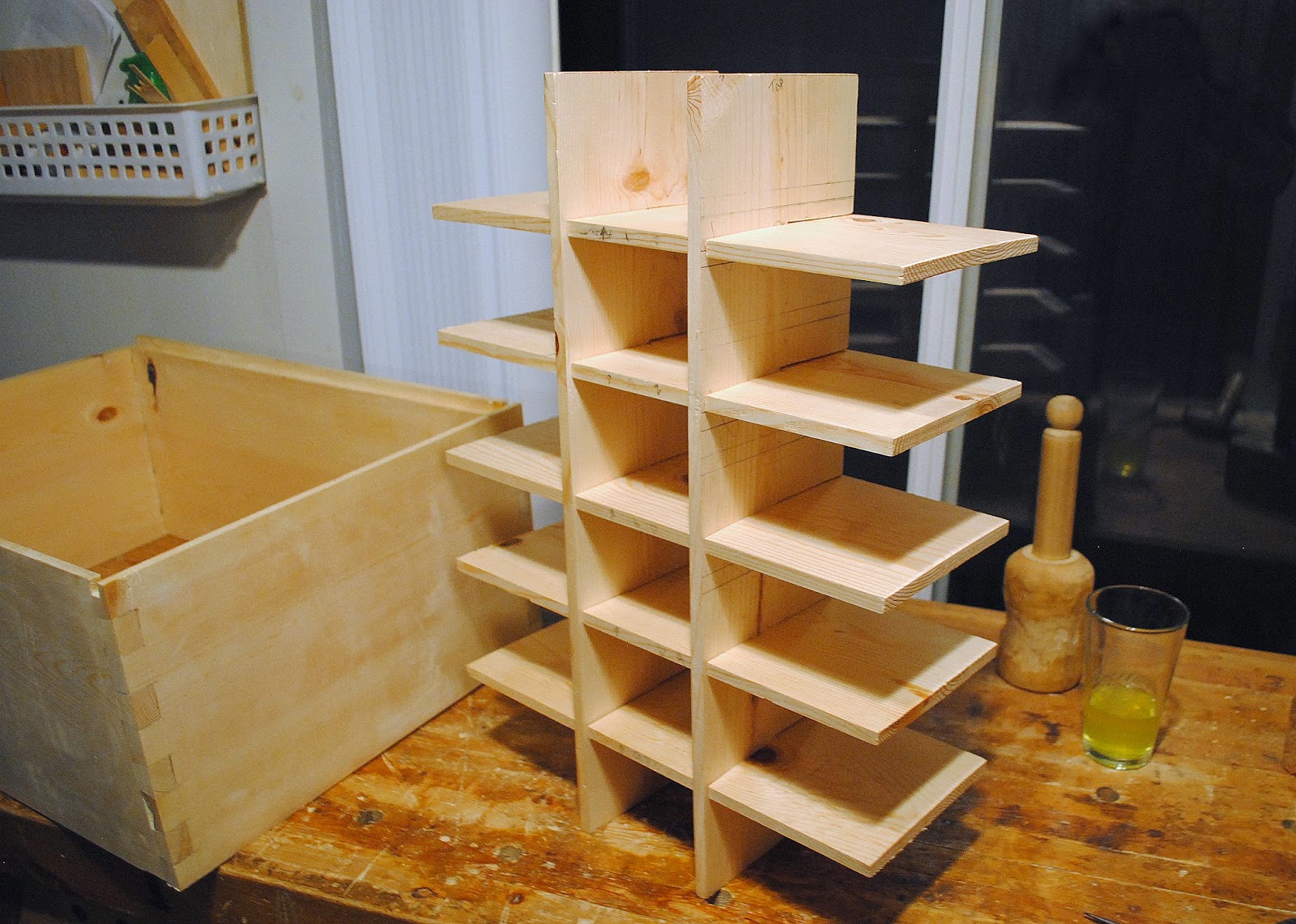 With the carcass done I took off out the the garage shop to break down and resaw some more pine for the next stages. I didn't bother take any photos because "yay, I can use a table saw!" (snore).


I made myself some 1/2" thick boards for the back and some 3/8" thick for the egg carton joined insert that holds all the drawers. I never think of egg crate joinery as being that sturdy or strong of a construct, but when you make the joints tight and the material is 3/8" thick solid wood, it feels a lot different. the only thing you have to be careful of is not breaking off one of the "tabs" along a grain line.

I pared down all the dividers to fit in the carcass and gang clamped them together to cut the slots with a brace and auger drill to establish the stop and a big backsaw to cut the walls. It wasn't until I was laying out the slots I realized my error. 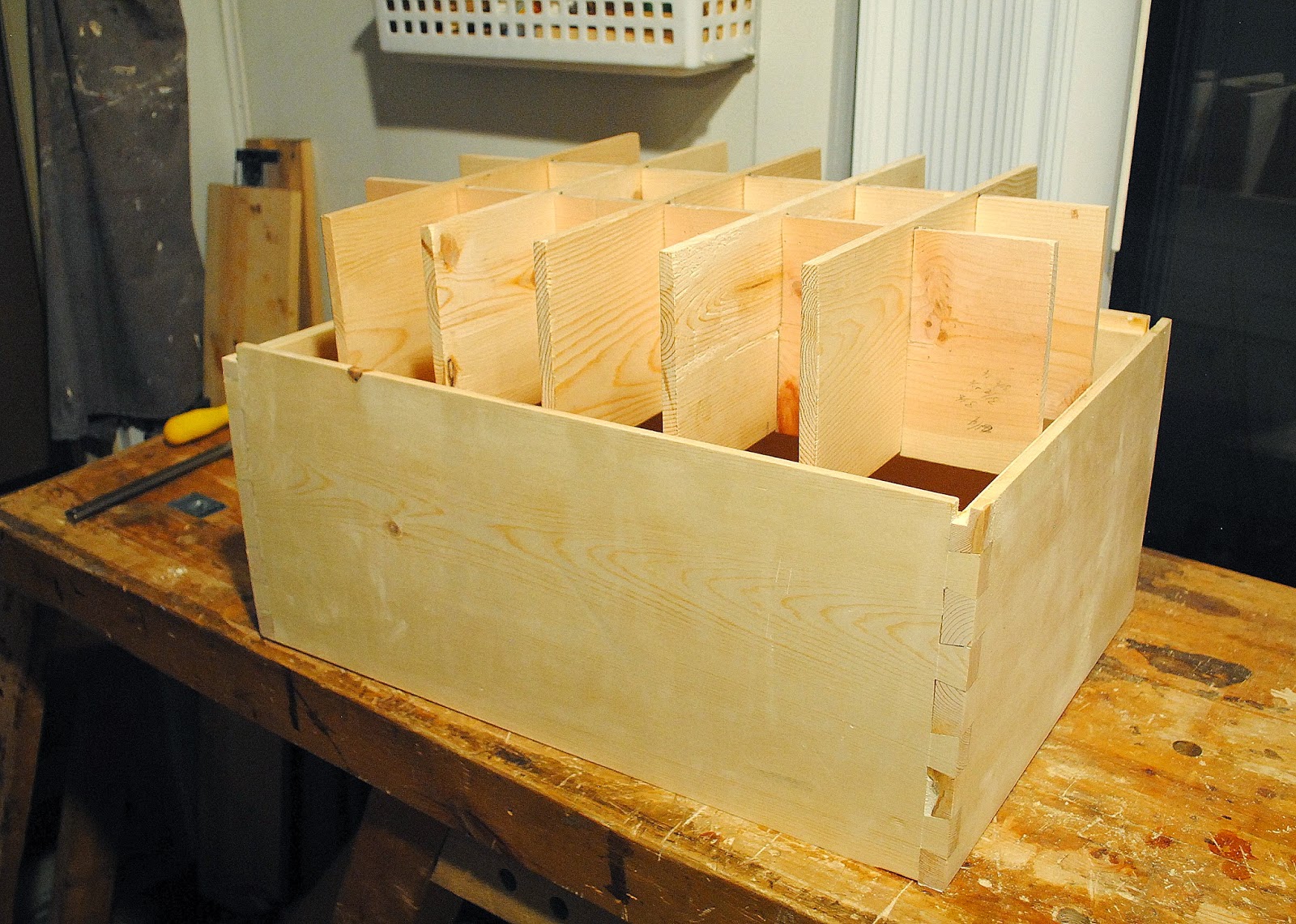 I had only resawn five horizontal boards and by the measured drawing and the cut list, I should have sawn six. Dammit. I should probably start to use cut lists more so I have more practice.

I was not going out and repeating a lot of set up for one board, my cabinet would just have to have three less drawers. But how does one figure out the spacing once we've abandoned the measured drawing. We're off the map and headed towards the edge of the world.

Never fear, I made sectors. 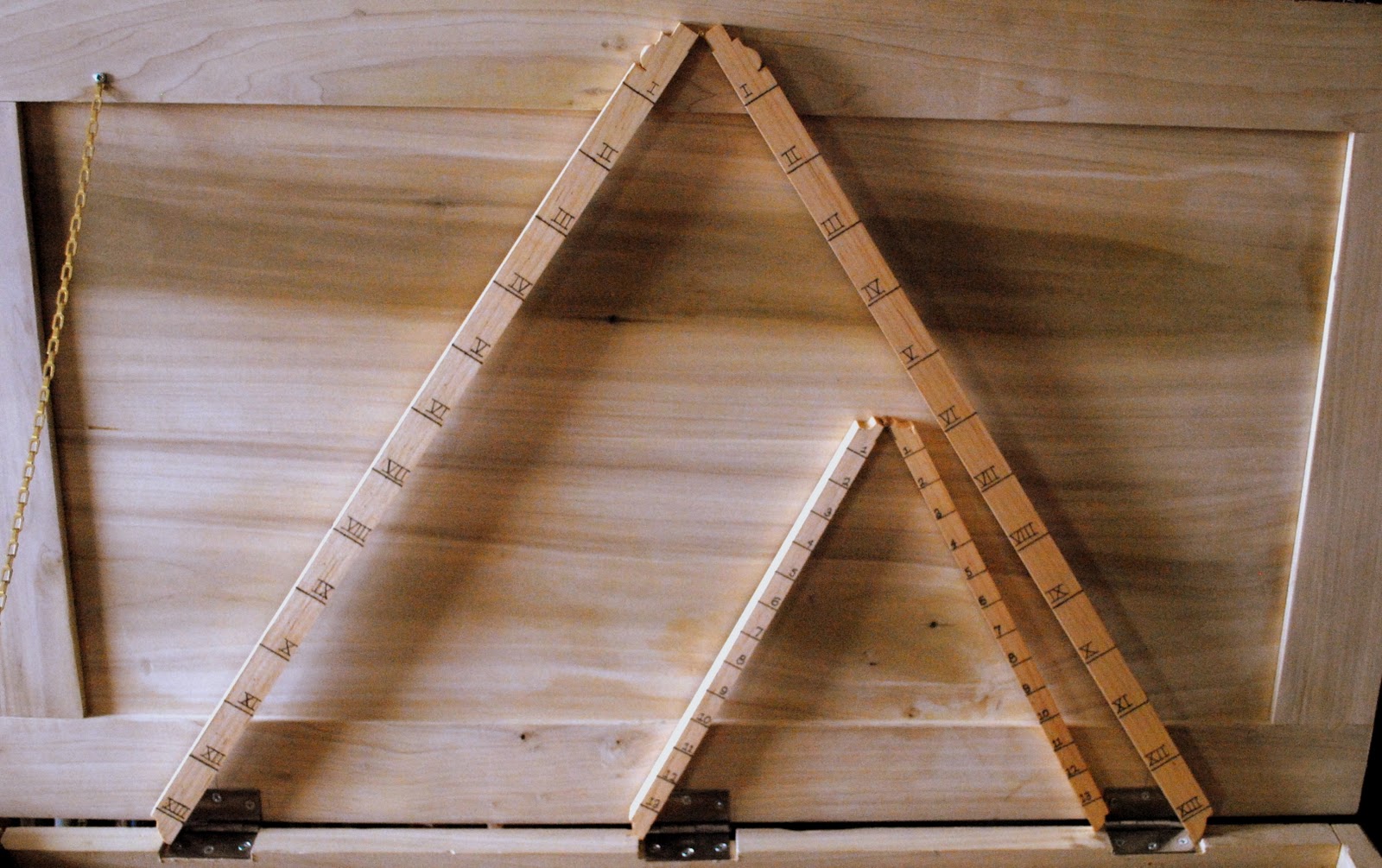 They're a fantastic little shop tool that solves all kinds of problems for me, Two sticks, a hinge, and a dividers and you can change your world. Make a pair and play with them. I use mine all the time.

The sectors helped me divide the space into six equal parts. I also widened the central drawer by an inch to make it easier for my hand to dig out the hardware goodies I store inside. 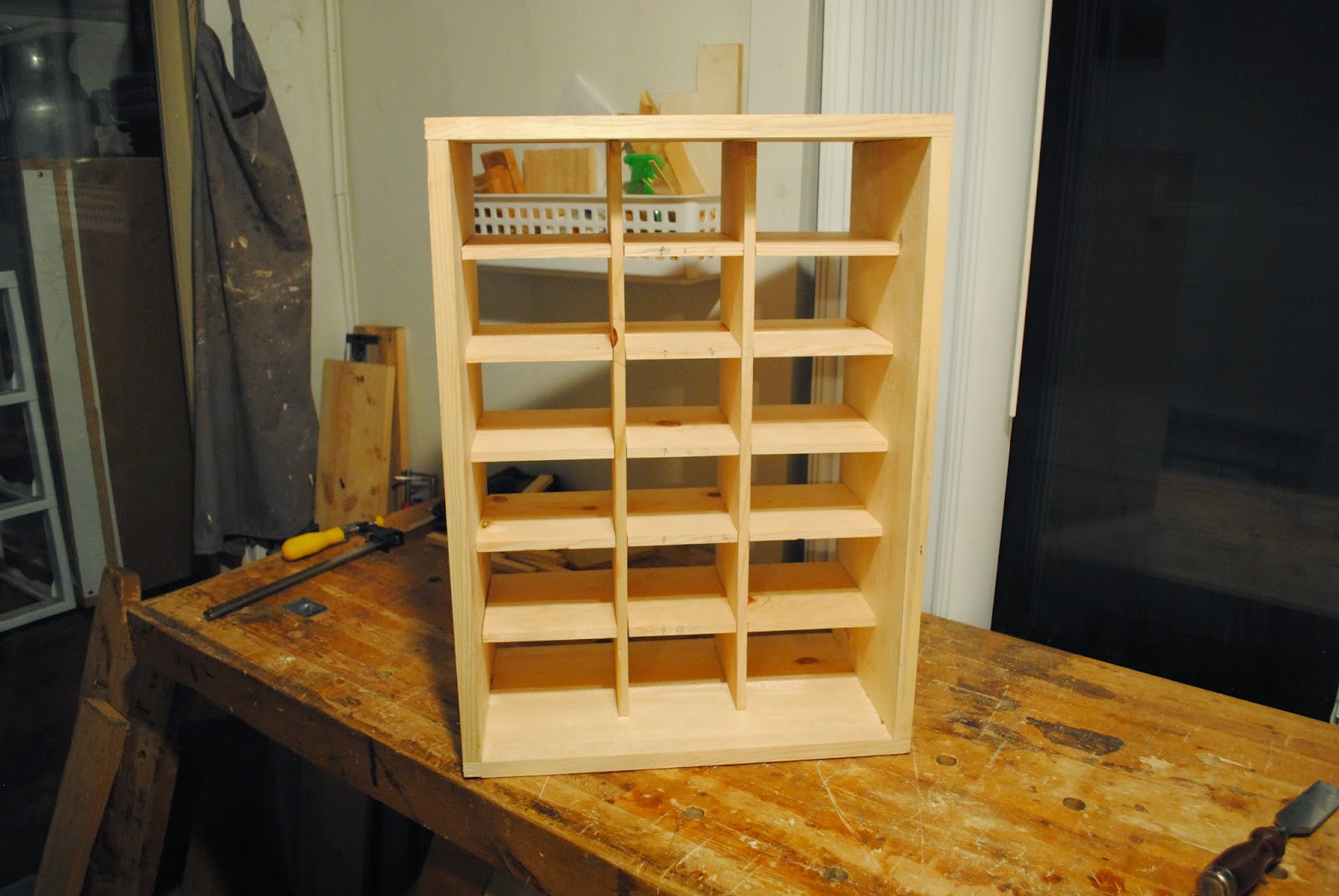 The moment of truth was sliding the crosshatched construct into the carcass. Everything was reasonably tight and yet, with the judicious persuasion of a mallet, everything slid into place. 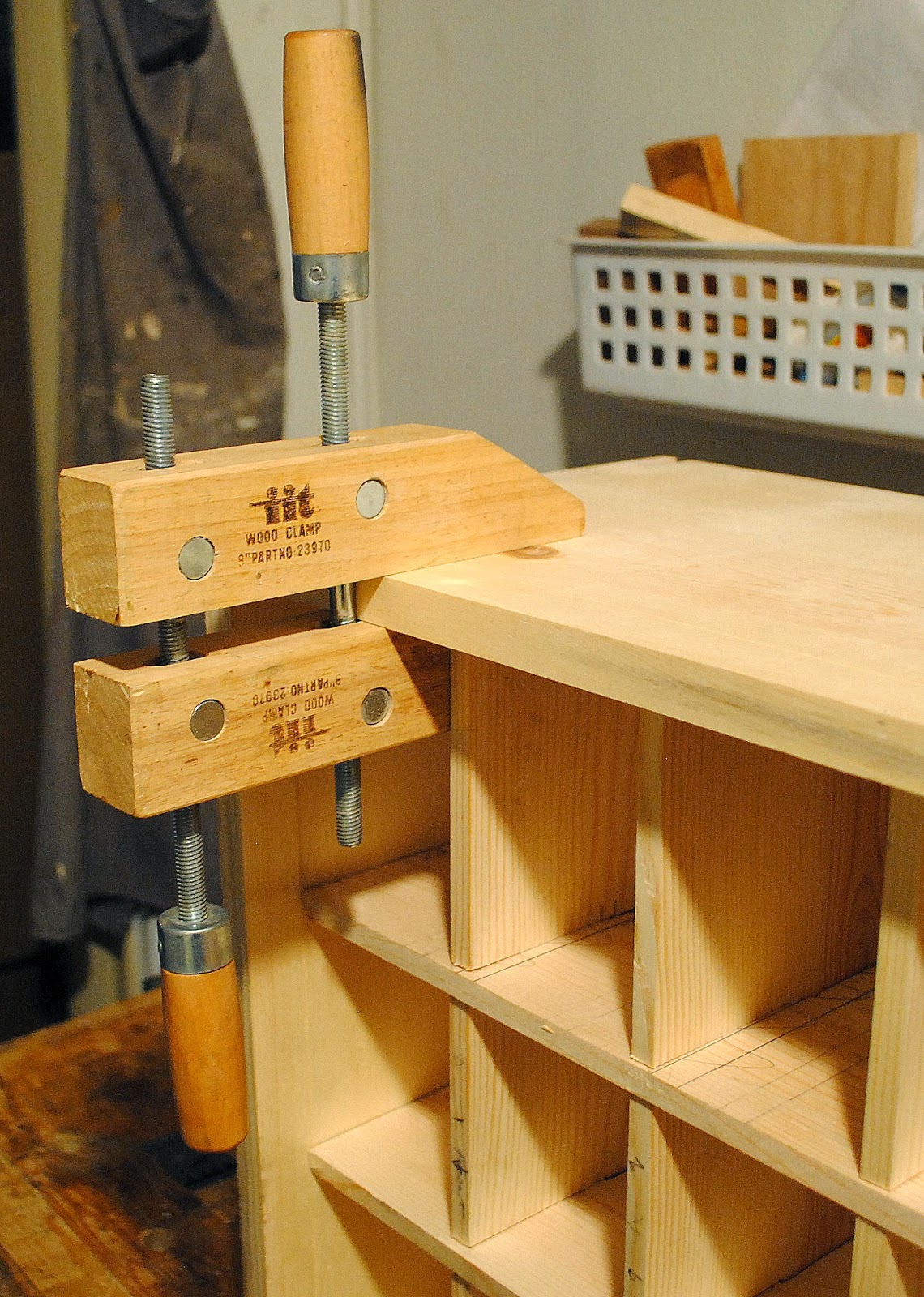 The dividers are toe nailed together in their crosshatching and the shelves are all nailed to the carcass wall from the outside. In the article Chris has a nice little jig to help translate the location of the shelves to the outside of the carcass. BUT there was no measured drawing or cut list for the jig so I had to figure out my own way of doing it.

I used a wooden clamp to transfer the mark. There's a little play in the clamp but once you tighten it up it snaps back into line and if I positioned the bottom jaw along the shelf, the top jaw provided reasonable guide for a pencil line. I used it all the way around, two nails in each place the divider touched the side of the carcass. didn't miss once. 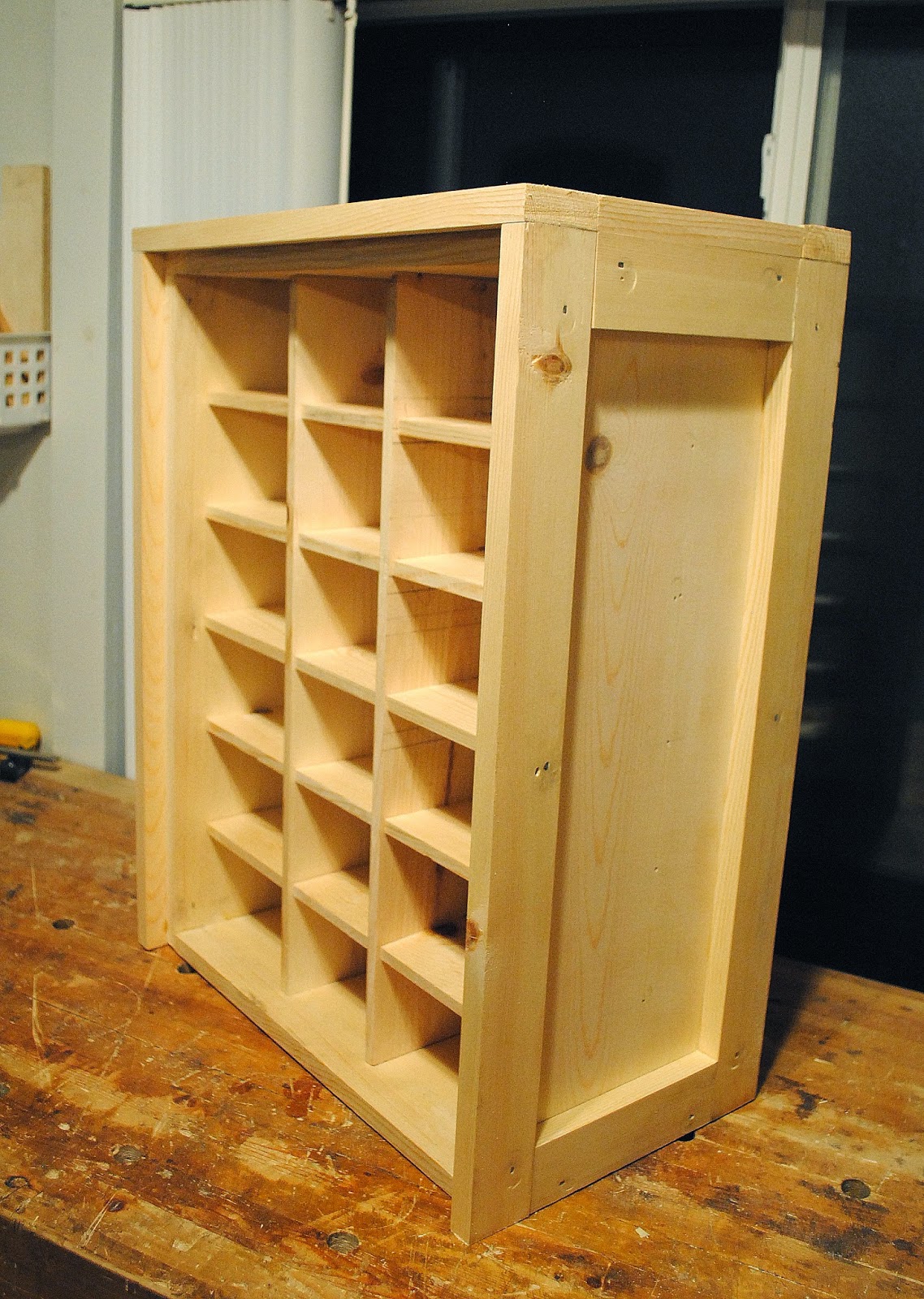 I also ran some 2" wide boards for the battens around the carcass. It feels weird and kind of liberating to cover up your hard earned dovetail joints. No joints to this work, cut to length, glue and cut nails. But my guess at how much 2" wide stock I'd need came up short too, by one board. 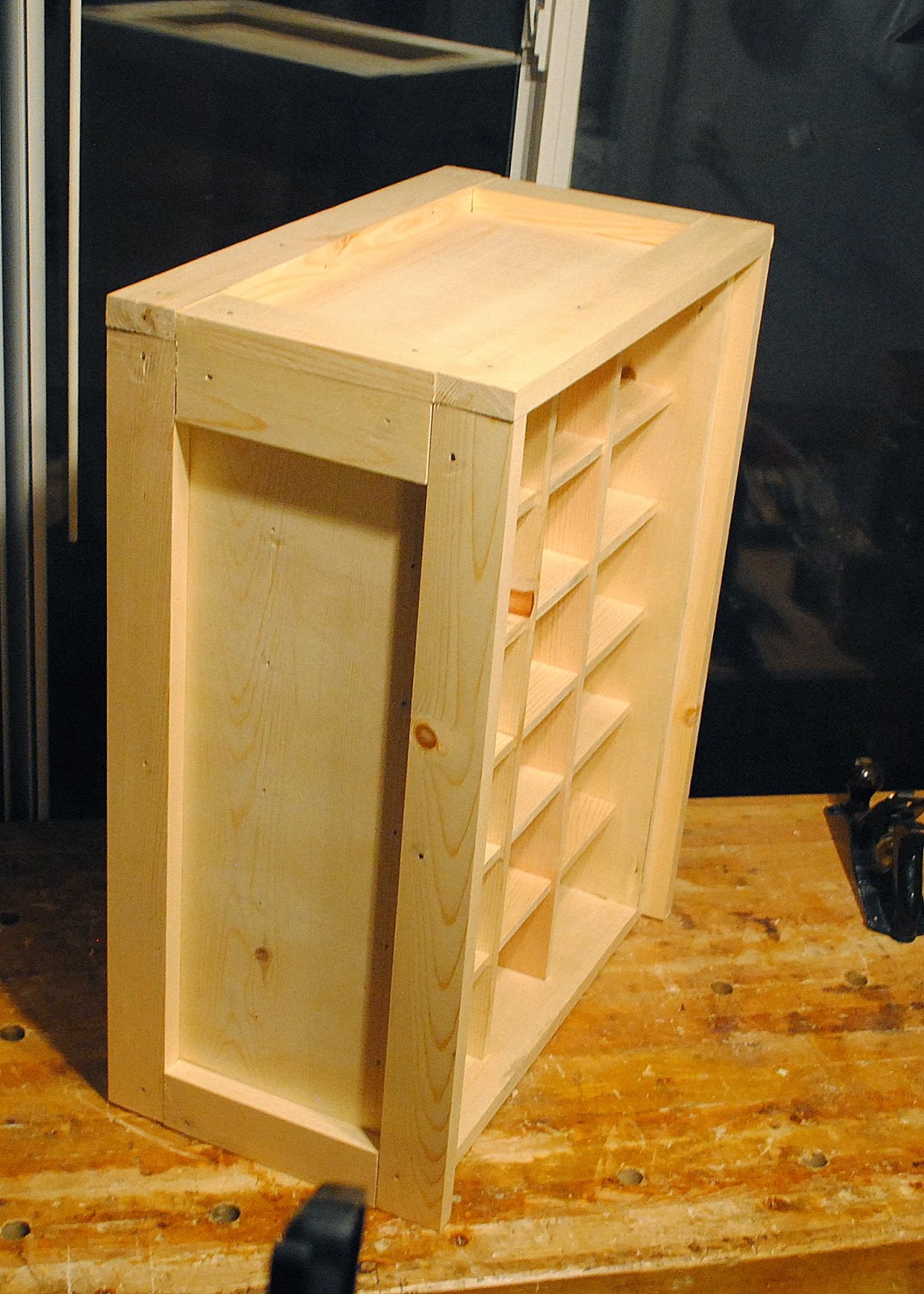 That's it. I'm done for the night. We will simply have to reconvene on the cut list on the morrow.

P.S. There is no font option that can convey sarcasm. I find this to be a tragedy and I think we should stop all attempts at manned space flight and instead get our nations best and brightest minds settled down to solve this problem first.

P.S.S. What if Comic Sans was the font meant to stand for sarcasm and no one understands that. What can we do to raise awareness people.

P.S.S.S. If you cannot infer for yourself what above text in sarcasm, what is sincere, and what is pure insolence, I cannot help you.