Dressing Up My Drawers

I've been working hard in the shop on a wonderful distraction. Honestly the Underhill nail cabinet is a fantastic project, just challenging enough yet straight forward enough. It hits that intangible Goldilocks's zone of "just right."  I'm very happy I decided to build one.

I'd spent some time building the carcass, filling it with some egg crate dividers, and attaching battens around the outside. Last Sunday I started the day in the garage at the table saw hacking up every piece of pine I had in my possession to make the drawer parts. I attached the back and fashioned a french cleat to hang the cabinet from.

Getting in on the wall and off my bench was important to clear up space to work on the drawers. 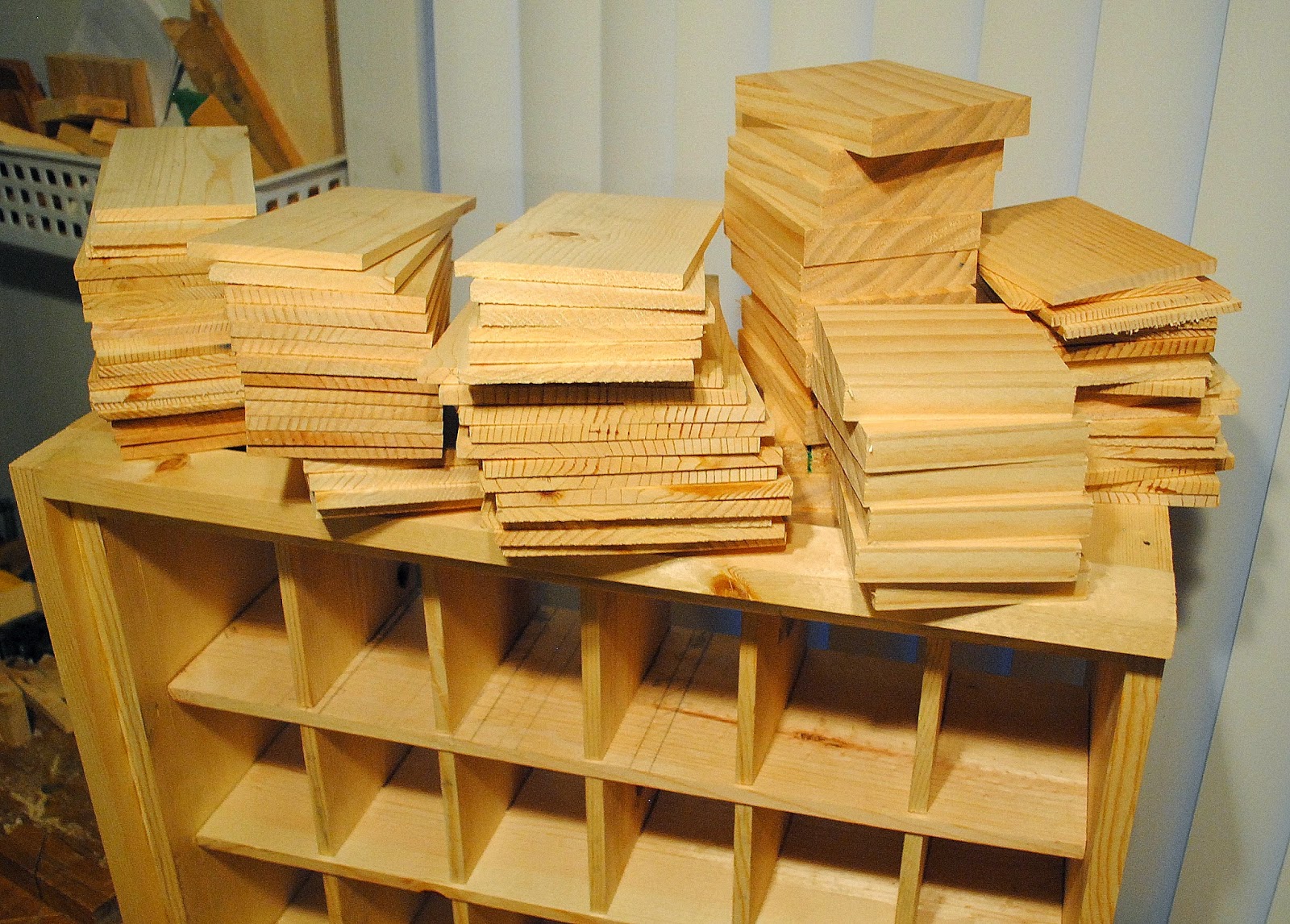 I sorted out the parts into the drawer spaces and called it a weekend. 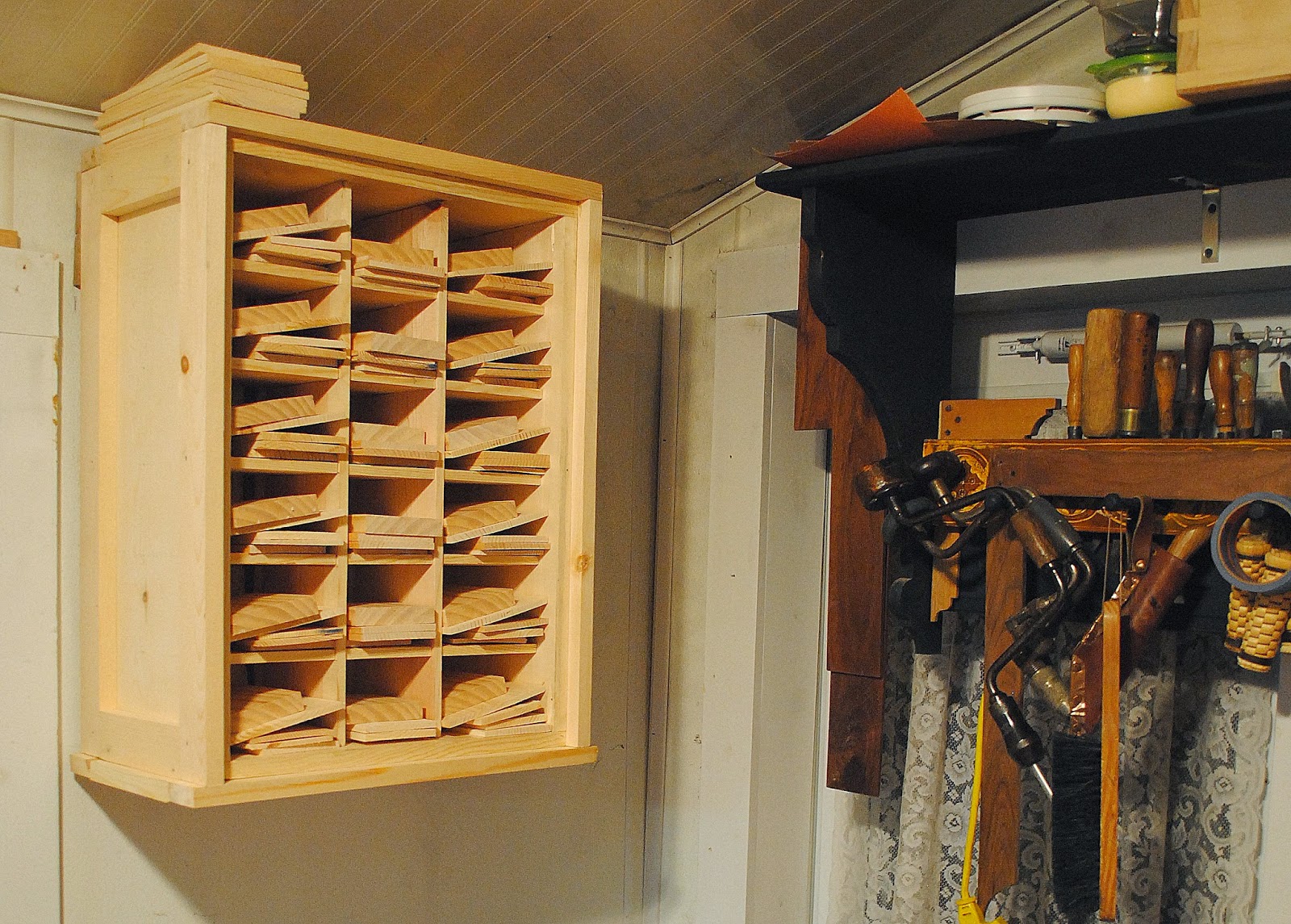 Throughout the week I'd spend an hour here and there fitting each drawer to it's opening. I'd plane the pieces to fit side to side and then mark them to length. I'd size the bottom to the opening and use that to dictate the rest of the drawer. 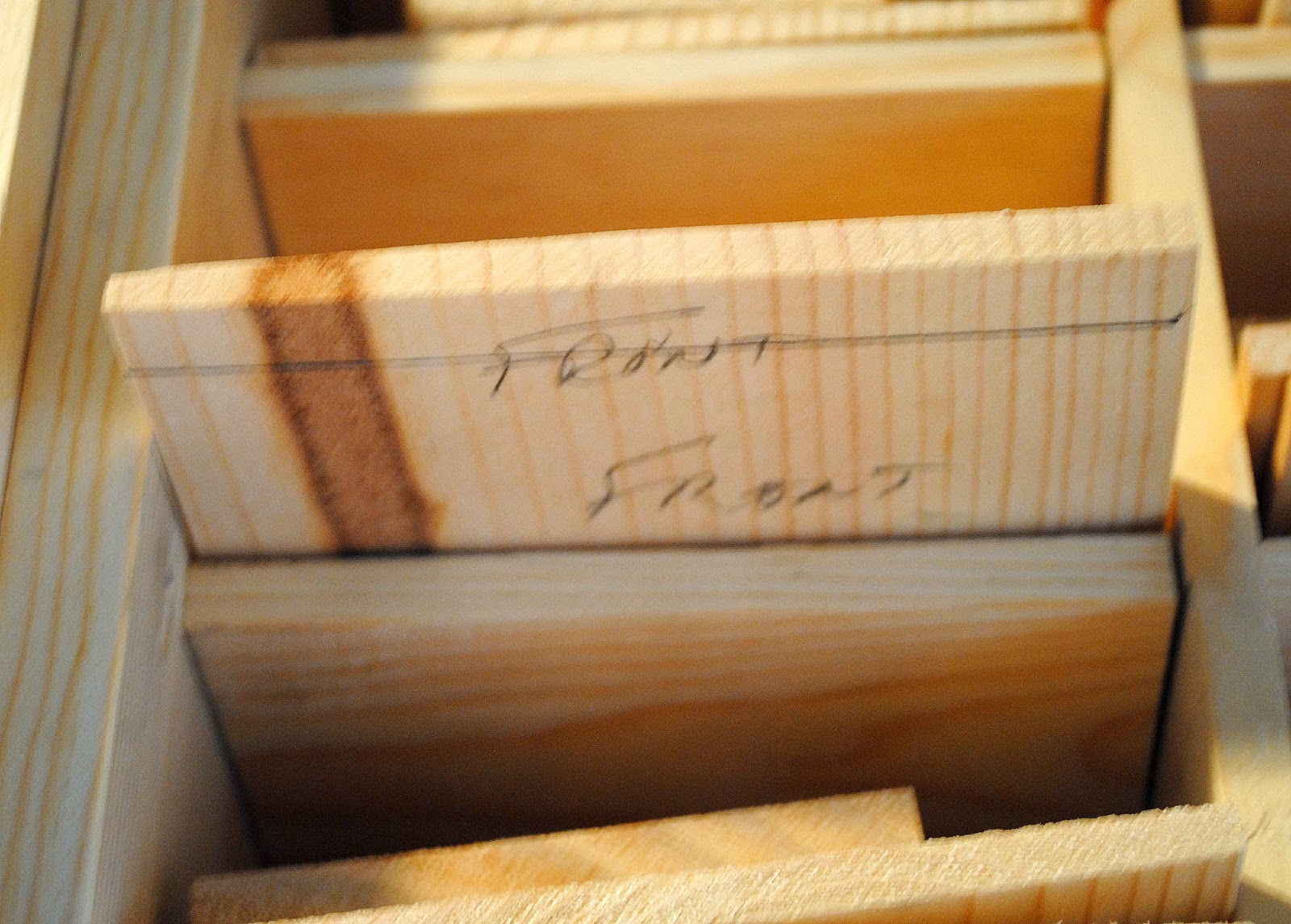 When I'd finish fitting all the pieces in a vertical column, I'd build those drawers before I moved on. No highfalutin dovetails or trick joinery here. On the original the drawers are put together with butt joints, glue and brad nails. I sought to replicate that. Until I had an issue. 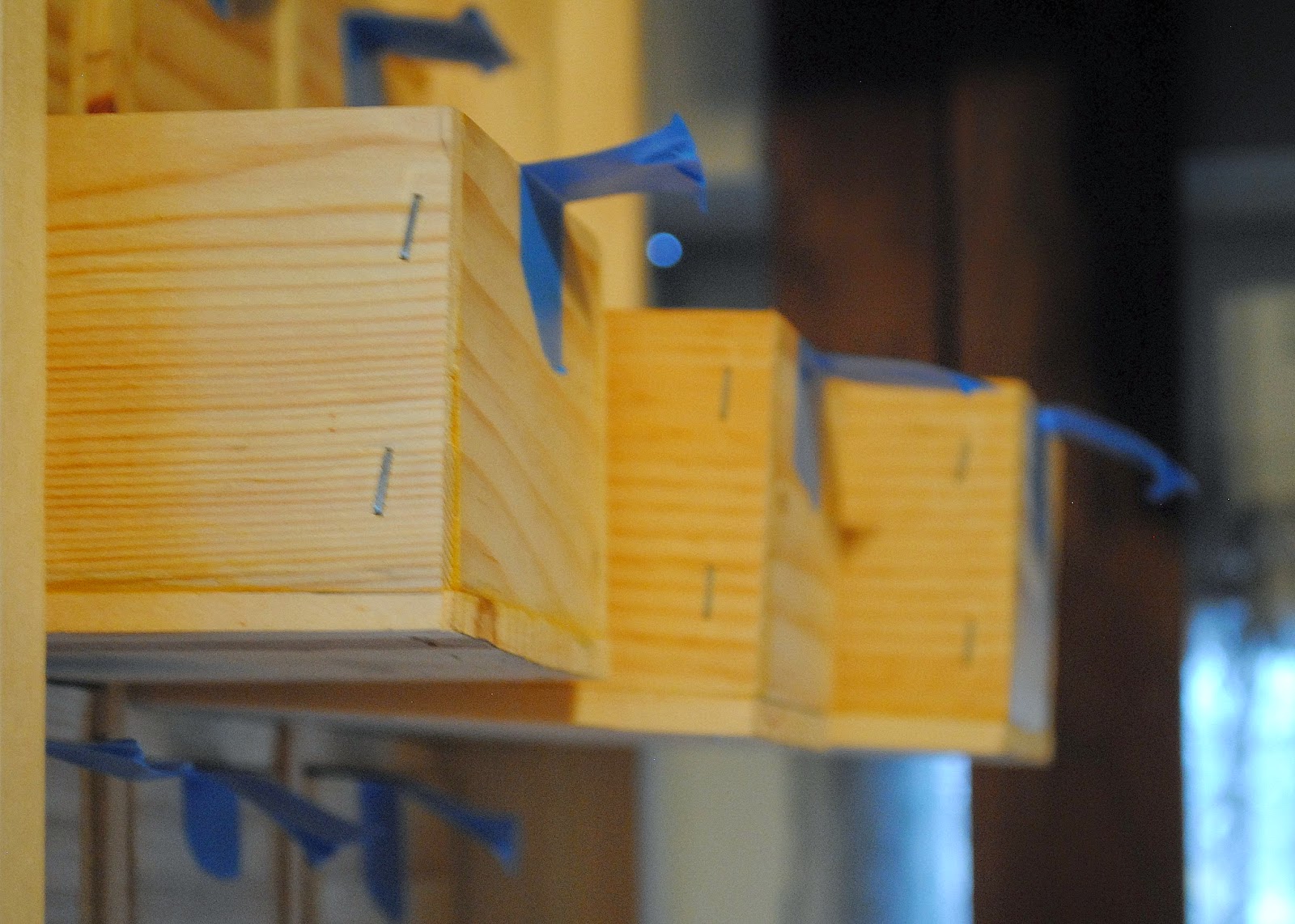 I've had a little electric staple gun / brad nailer for around fifteen years. I've had a package of 5/8" brads for it for nearly as long, I knew I was running low but after two drawers I had run out. I took off to the home store to find more and thought I was successful. I brought home several packages of 5/8" brads that listed the make and model number of my little nailer on the box.

Unfortunately I was swindled. The brads were all 1/16th too long to fit into the gun. Though it occurred to me I could file or grind down each group of brads to fit that seemed like needless fussing as well. I returned the brads and resolved myself to use staples instead.

I was disappointed at first. I mean what self respecting woodworker uses staples? After a bit I remembered not to take myself so seriously. After all the original was built from a packing box, in the end, staples seems fitting while in this phase of mass drawer construction. Though they are decidedly less dynamic a fastener.

If repairs come up in the future I'm sure to use whatever odd and end I have on hand. 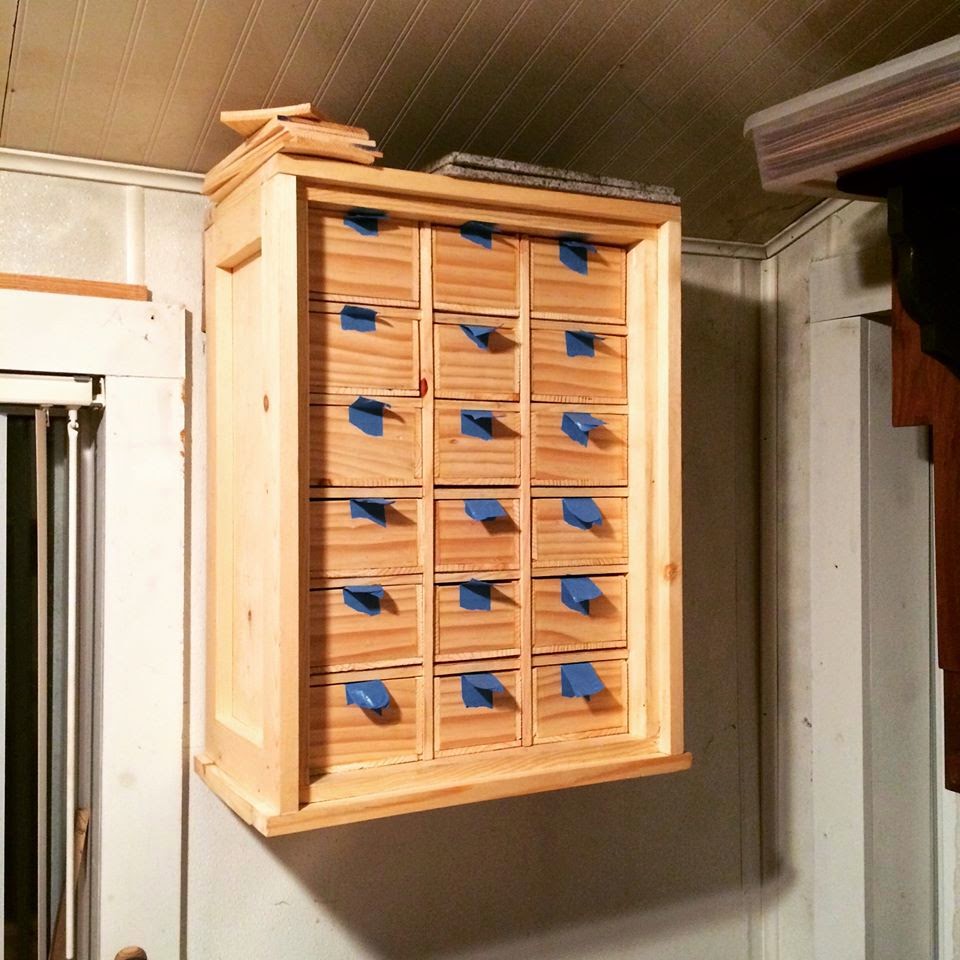 By Friday night I had finished all the drawers.

Now to play a little. 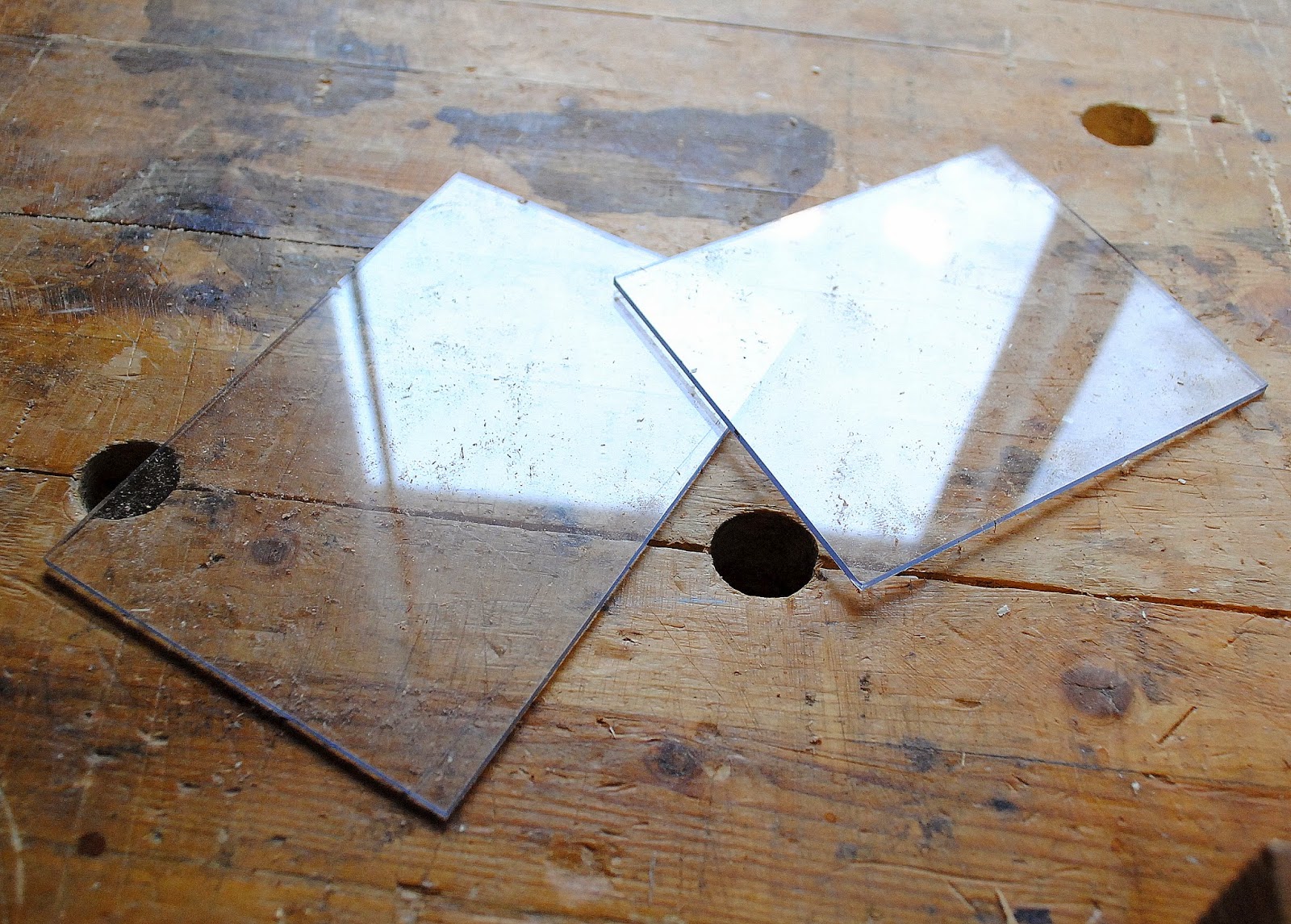 I don't own most of the typical tool kit associated with veneering. I've been collecting it slowly, but there are big pieces missing yet. After taking stock of my options I decided, why should that stop me.

My mother is a quilter, I've watched her do it all my life. Parquetry and marquetry remind me very much of her quilts, Different pieces fitting together for a whole. I know a common quilter trick for repetitive pieces is to make (or buy) a Plexiglas template. I decided to do the same, making two templates for the two drawer sizes. 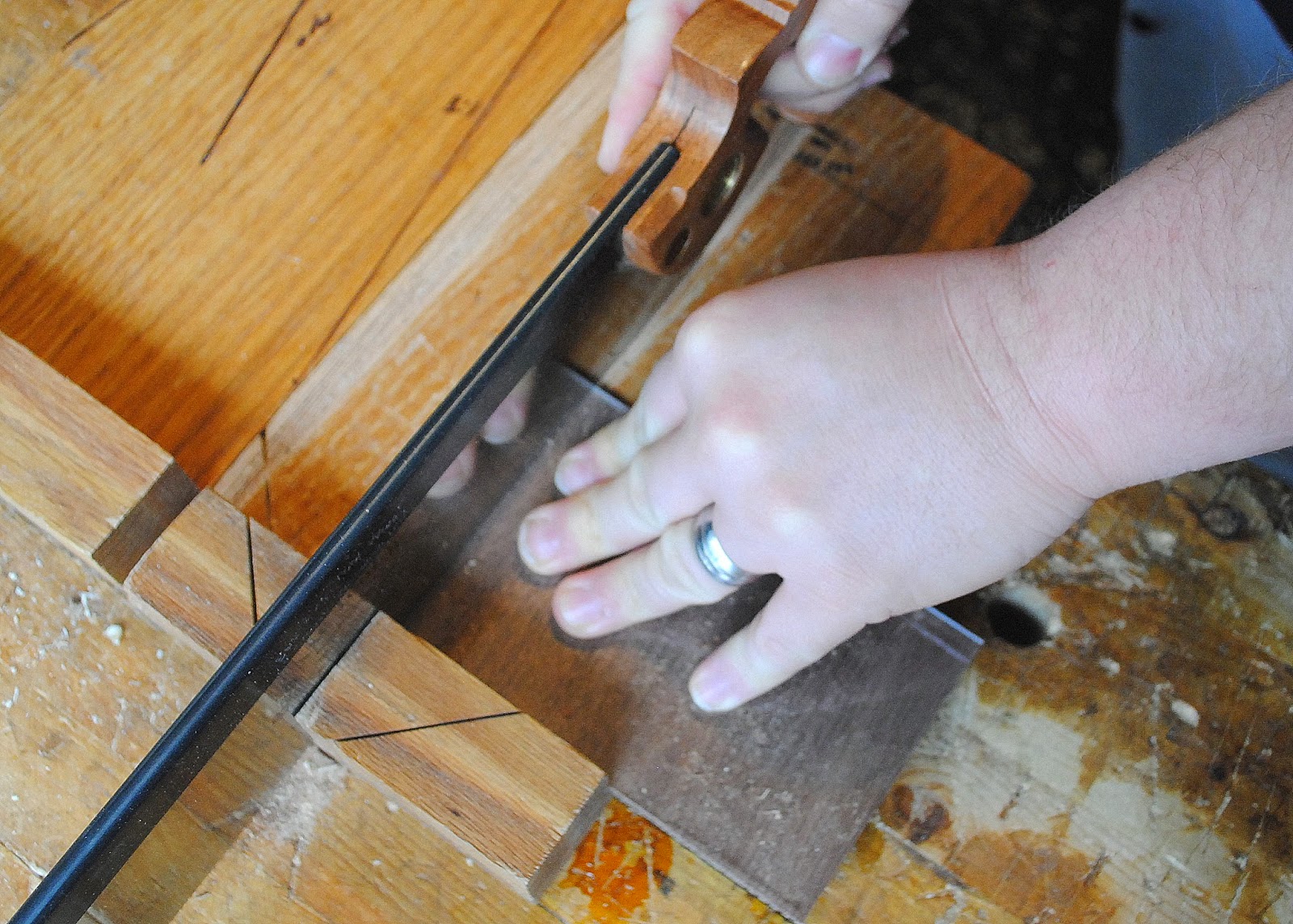 The templates offered support and rigidity to the veneer, allowing me to cut it to size with a rip and crosscut backsaw. 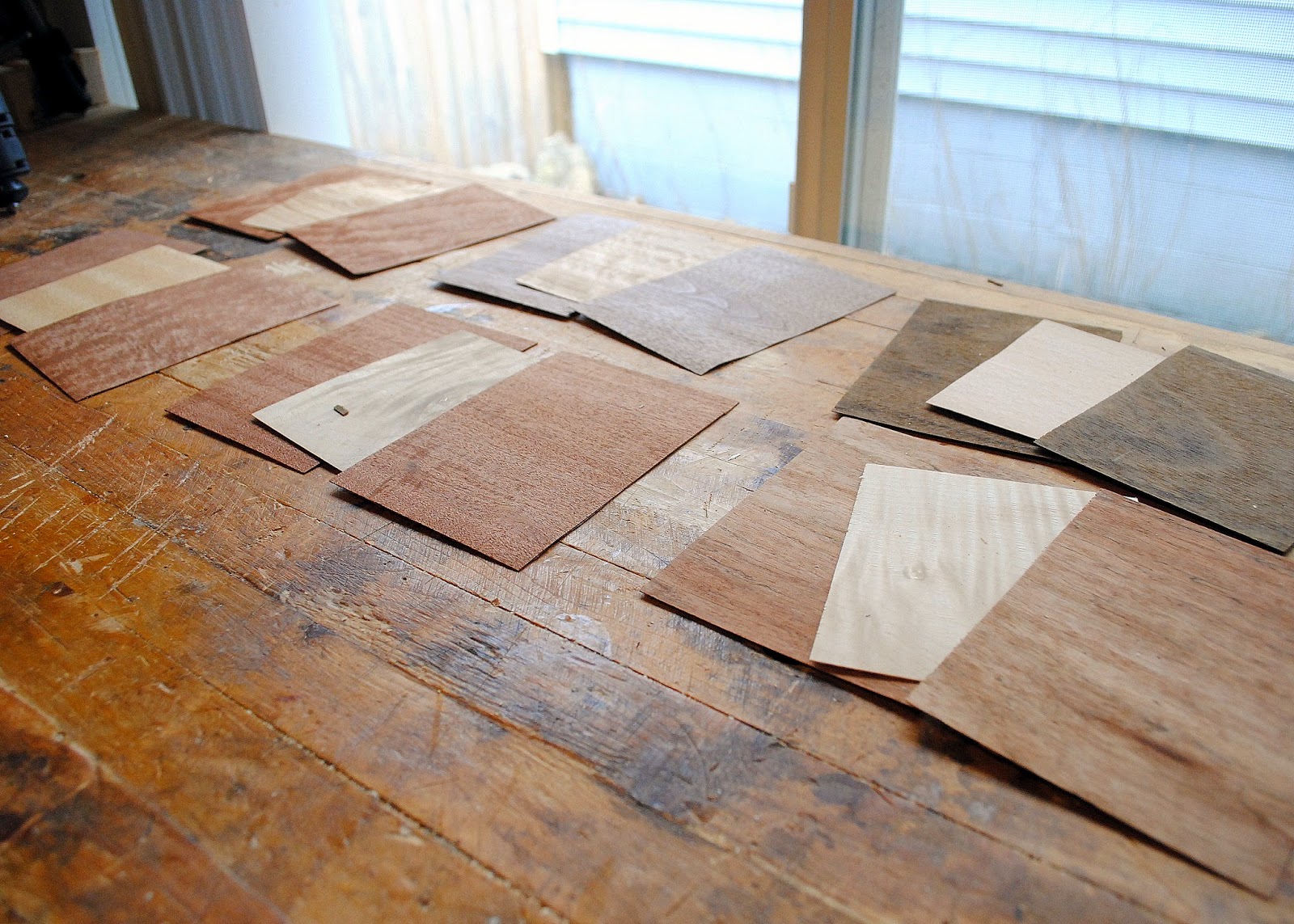 I cut enough so the outside vertical lines of drawer could have dark colored back grounds and the middle line would be light in color. Several years ago I picked up a couple multi-sample packs of commercial veneer at a woodworking show. There was too much variety to do much significant with so I've just held on to them. but the variety is fun to play with here. 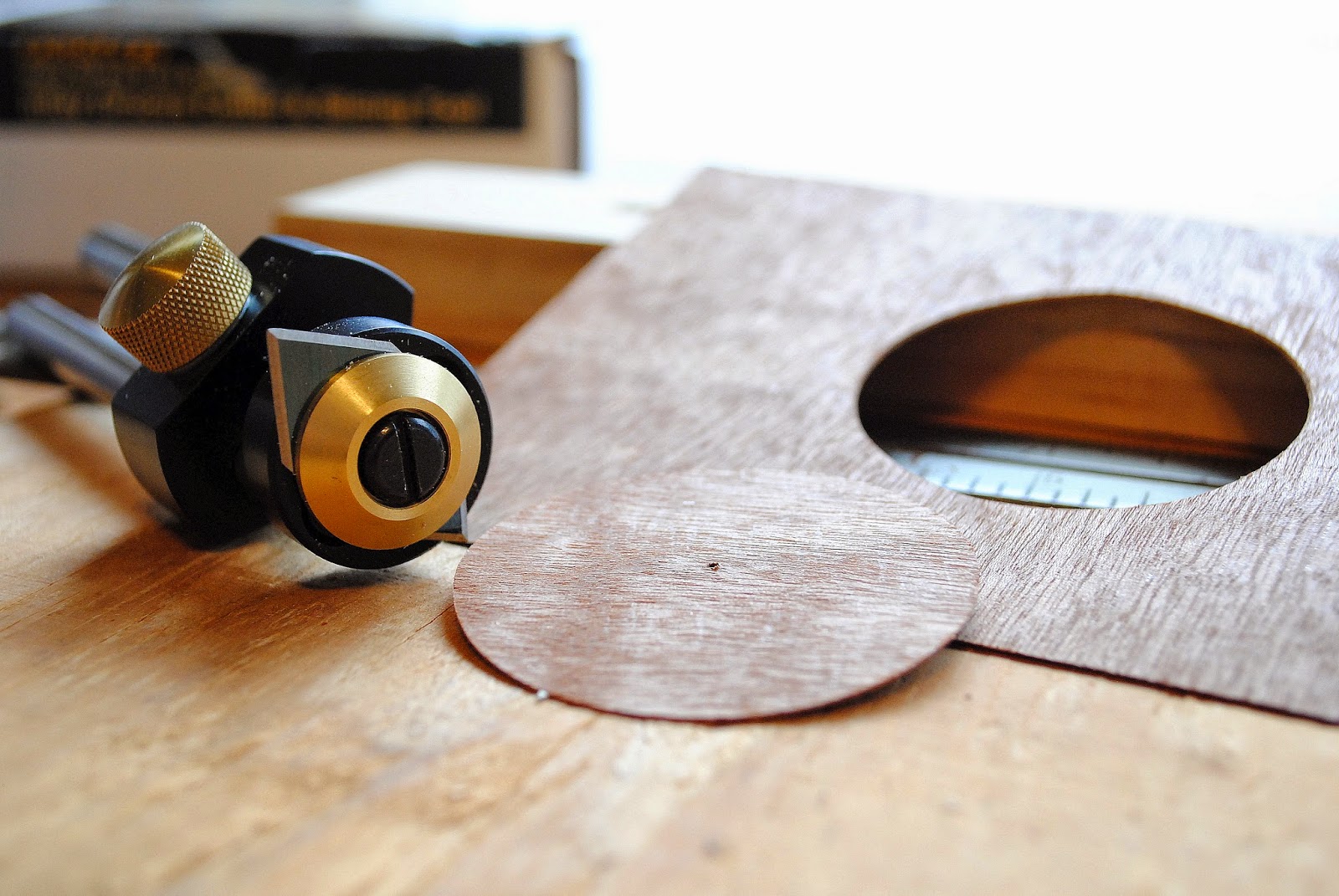 A little while ago I managed to get my hands on the Veritas string inlay system. I have plans for a chest with large line and berry string inlays. I lightly hacked the tool to remove circles from the center of every drawer front by using the string cutting blade and the compass point together. 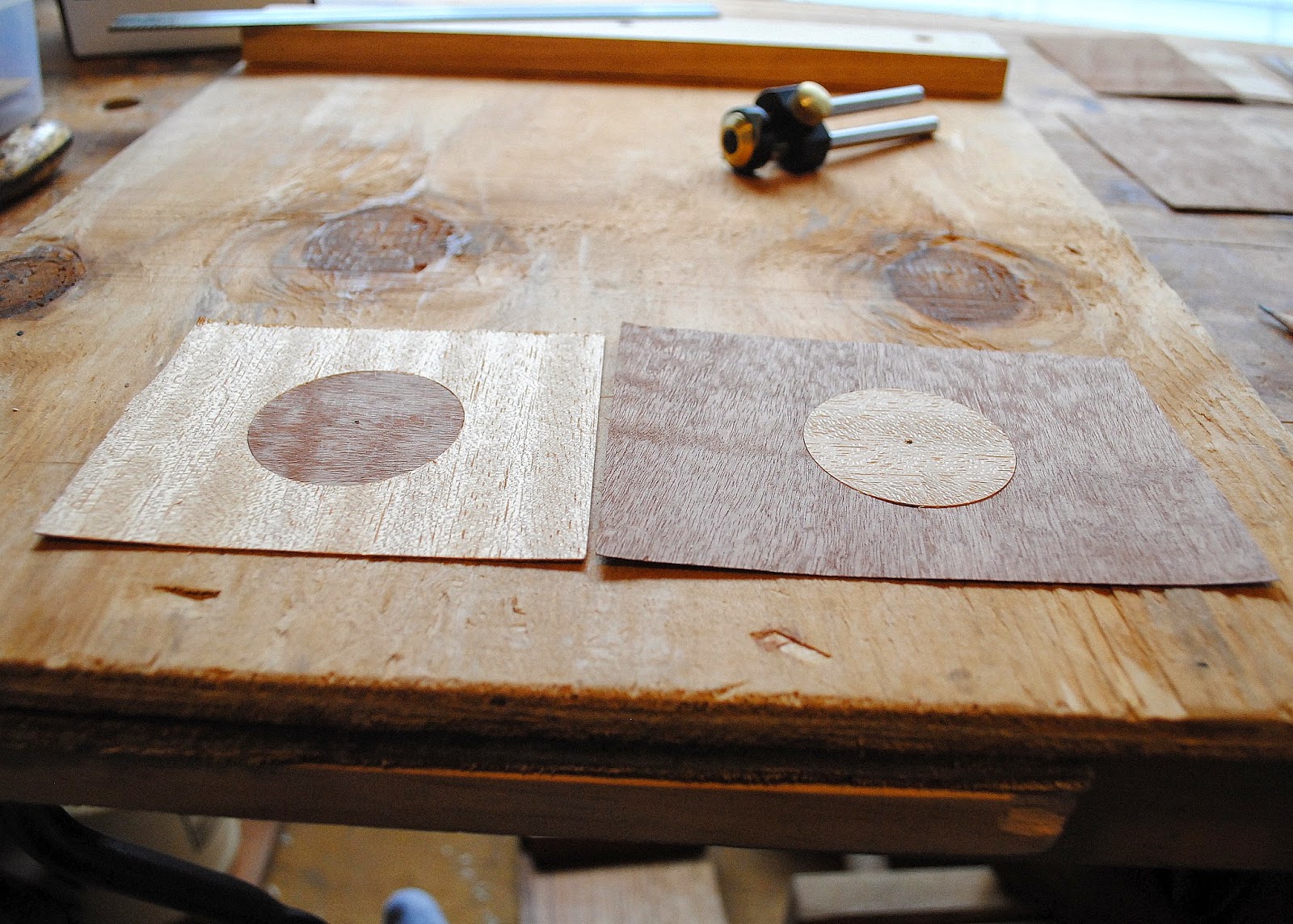 This allowed me to swap the center dot around and get the same fit repeated over and over. No toothing plane in my repertoire, but I do have a fine toothed gentleman's saw I dislike so I held that at 90 degrees to the surface of the drawer front and used it much like a card scraper and achieving a similar surface effect, (I'd almost forgot this part, a shout out to Freddy Roman who reminded me via Facebook. Thanks man!) 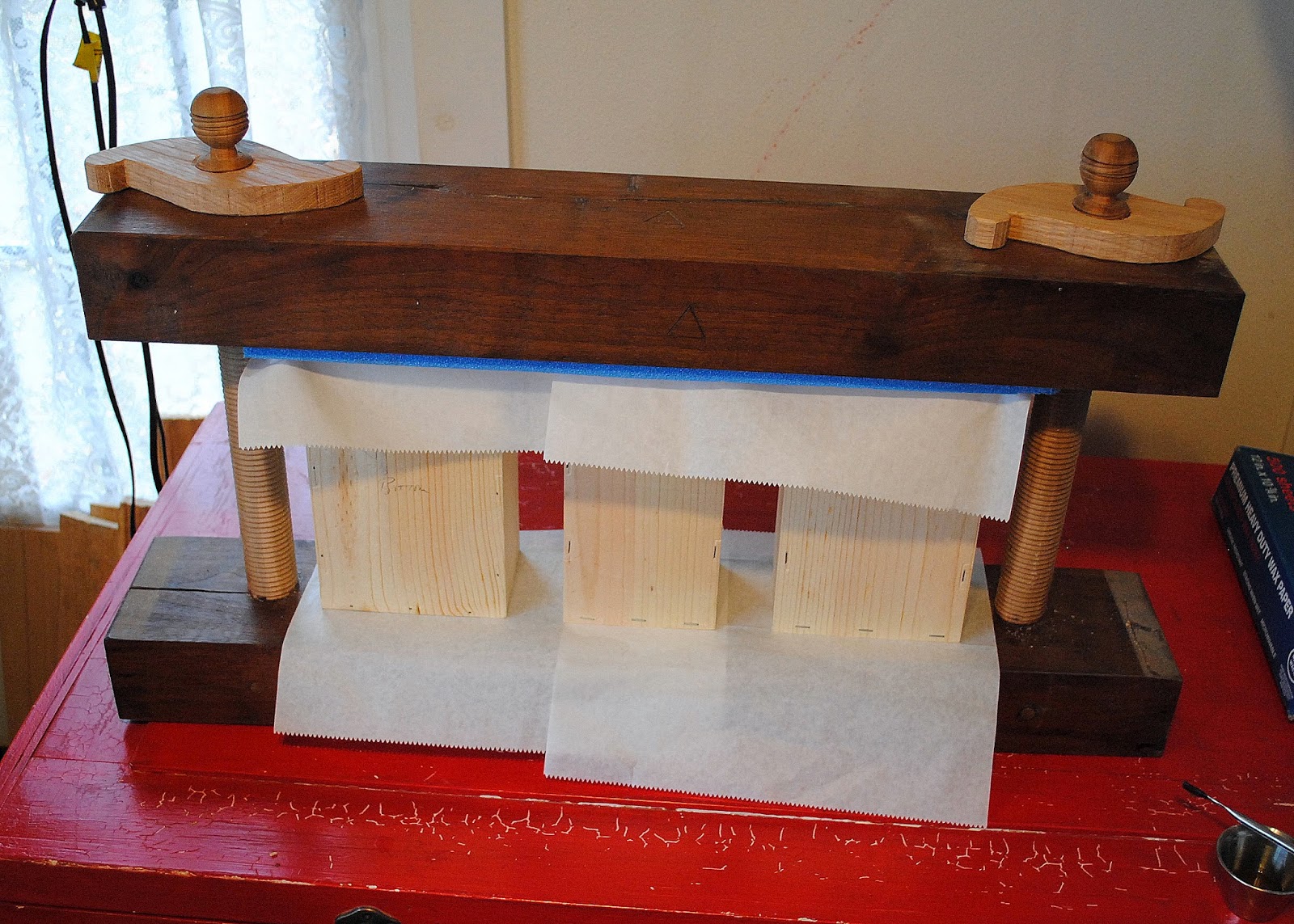 A little warmed Old Brown Glue and into the press vise for a few hours. 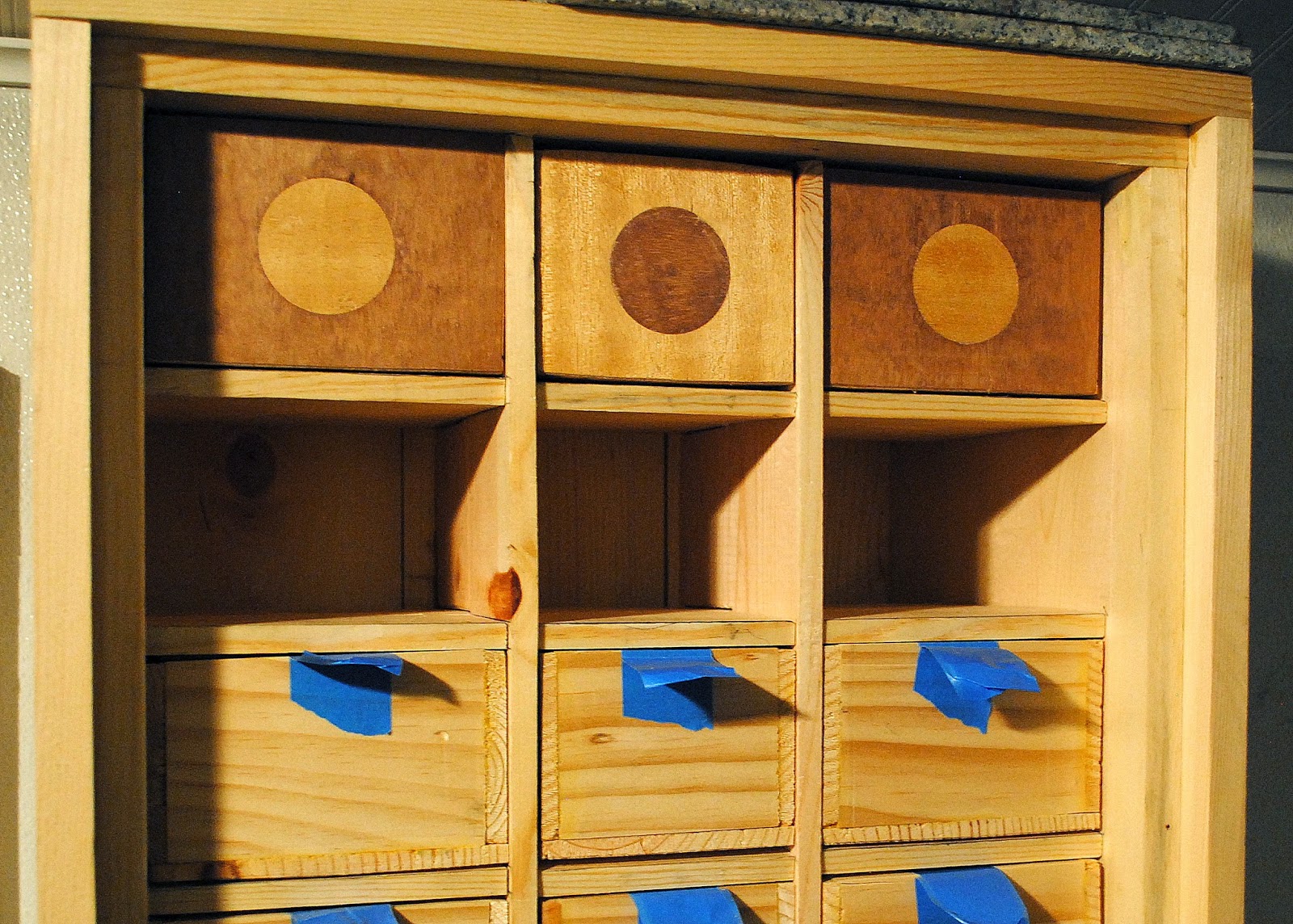 Out of the press vise. A little trim and work with a card scraper. I think that will do nicely.

It's an odd pairing, stapled drawer joints and veneer. Let's see what else I can do to mess with this concept and get away with it.