I'm not much of a risk taker in the world outside my shop. I wear my seatbelt, show up to my day job on time, and don't enjoy slot machines or lottery tickets.

I have a friend I owe a carved box to. A couple weeks ago I finally got him nailed down to some specifics regarding size and use. He's going to use it in conjunction with his own medieval reenactment and I've wanted to build a dry run of one of the chests shown in the Maciejowski Bible. 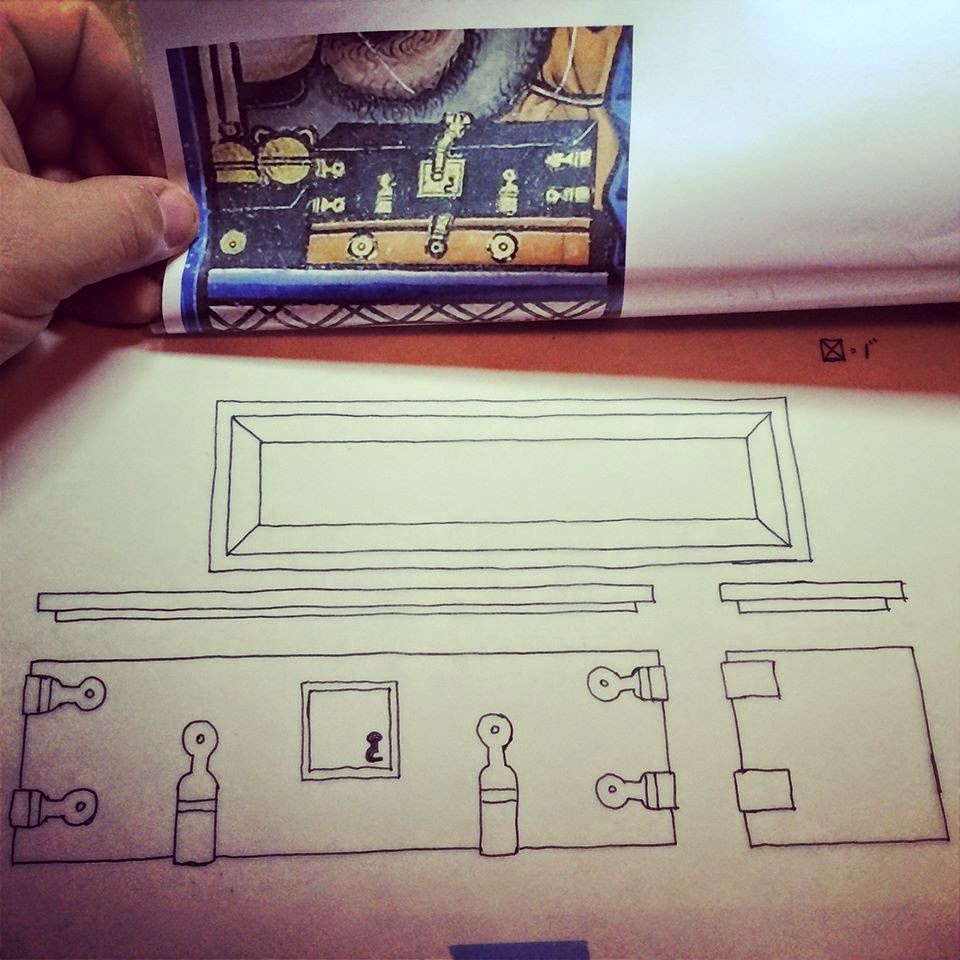 The box itself would be fairly simple but I wanted to play with some of the treatments. The Box in the miniature is colored black and paint works and it is medieval accurate, but I wanted to try a different approach.

I have a blacksmith on the line for the lock and straps for the "good" box for the book, but I wanted to try and play with some off the shelf options from the home store to offer alternatives to readers. I also wanted to play with lining the inside of the box with some wood block printed paper after seeing some examples of this treatment in Victor Chinnery's book "Oak Furniture: The British Tradition"

I remembered reading about doing a surface treatment on oak that would stain it black. I think I first heard about it from Stephen Sheperd over at Full Chisel Blog, he refers to it as Iron Buff, which is probably a better name that what I've been calling it (dirty vinegar). It's basically vinegar thats been charged with iron filings and it so happens I started a jar priming several weeks ago. 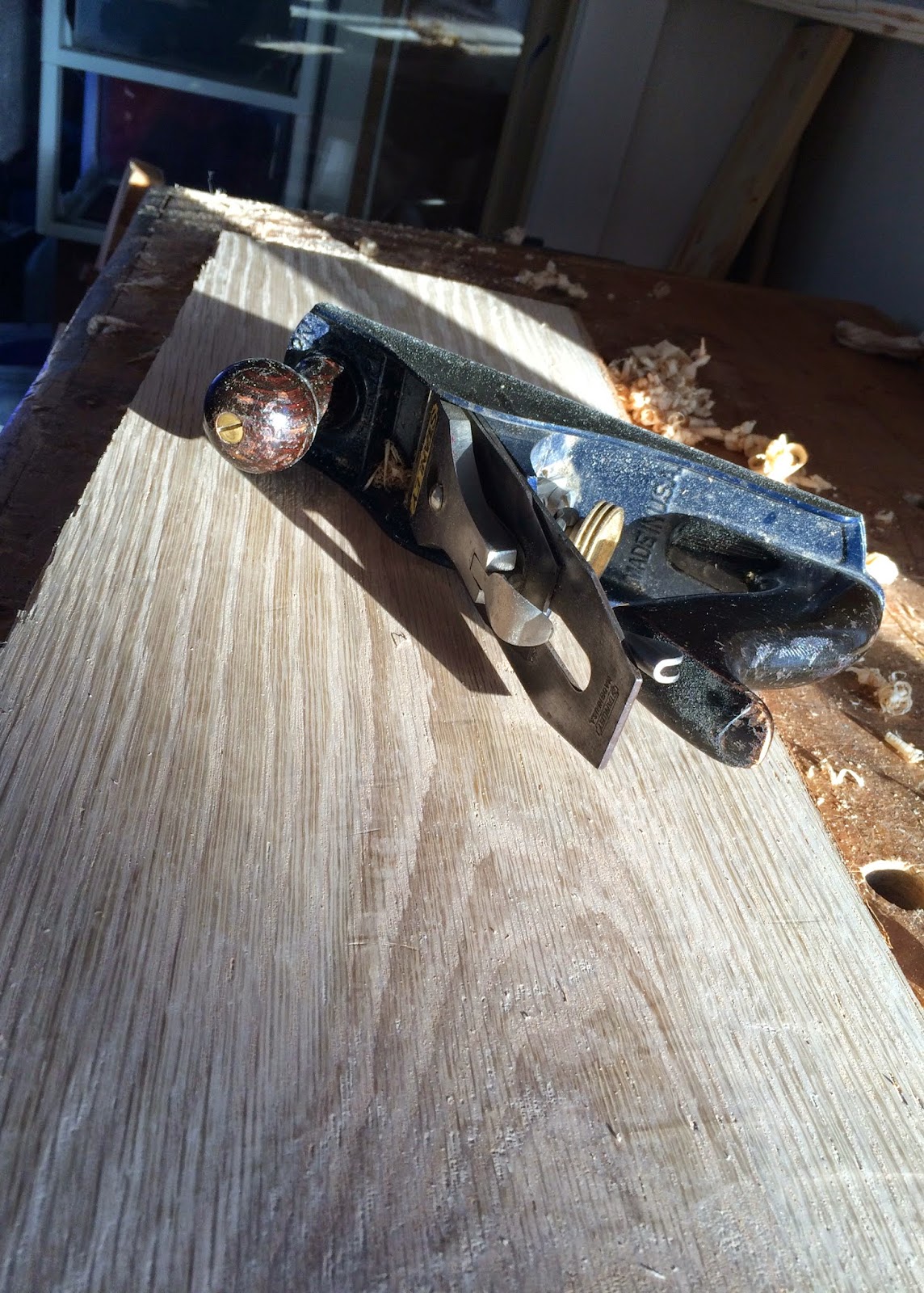 I knew oak was particularly receptive to a reaction to iron buff, and it just so happens I had a board of white oak earmarked for this box already. All I had to do was saw it up and plane it down to size 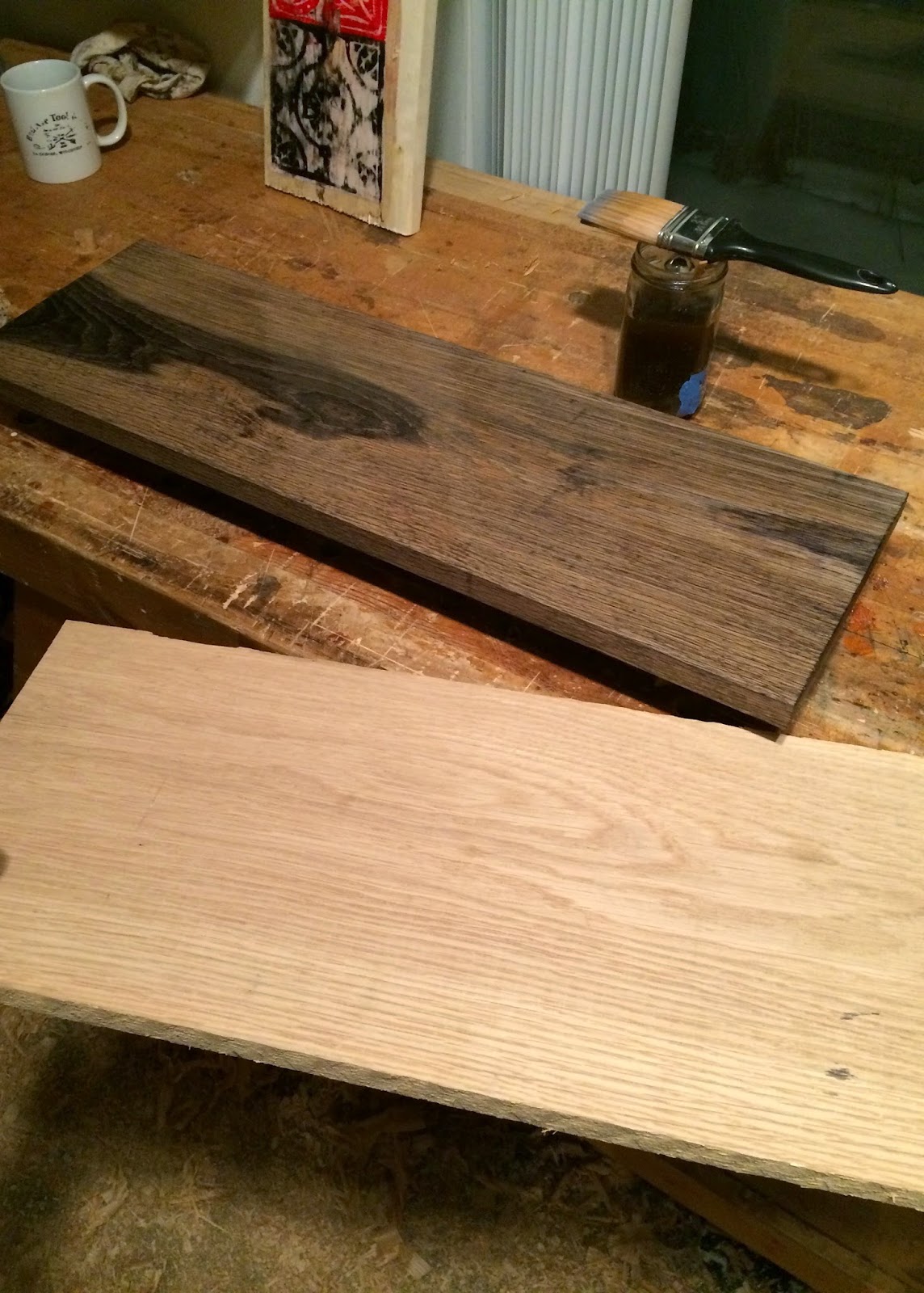 A single coat of iron buff changed the color of the oak dramatically. The board in the foreground was connected to the stained one in the back. I know others have done this before, but for me this was magical to see. I just layered it on thick with a brush and set it on some painter's triangles to dry. After a few hours it was dry but still had a slightly vinegar/metallic smell and 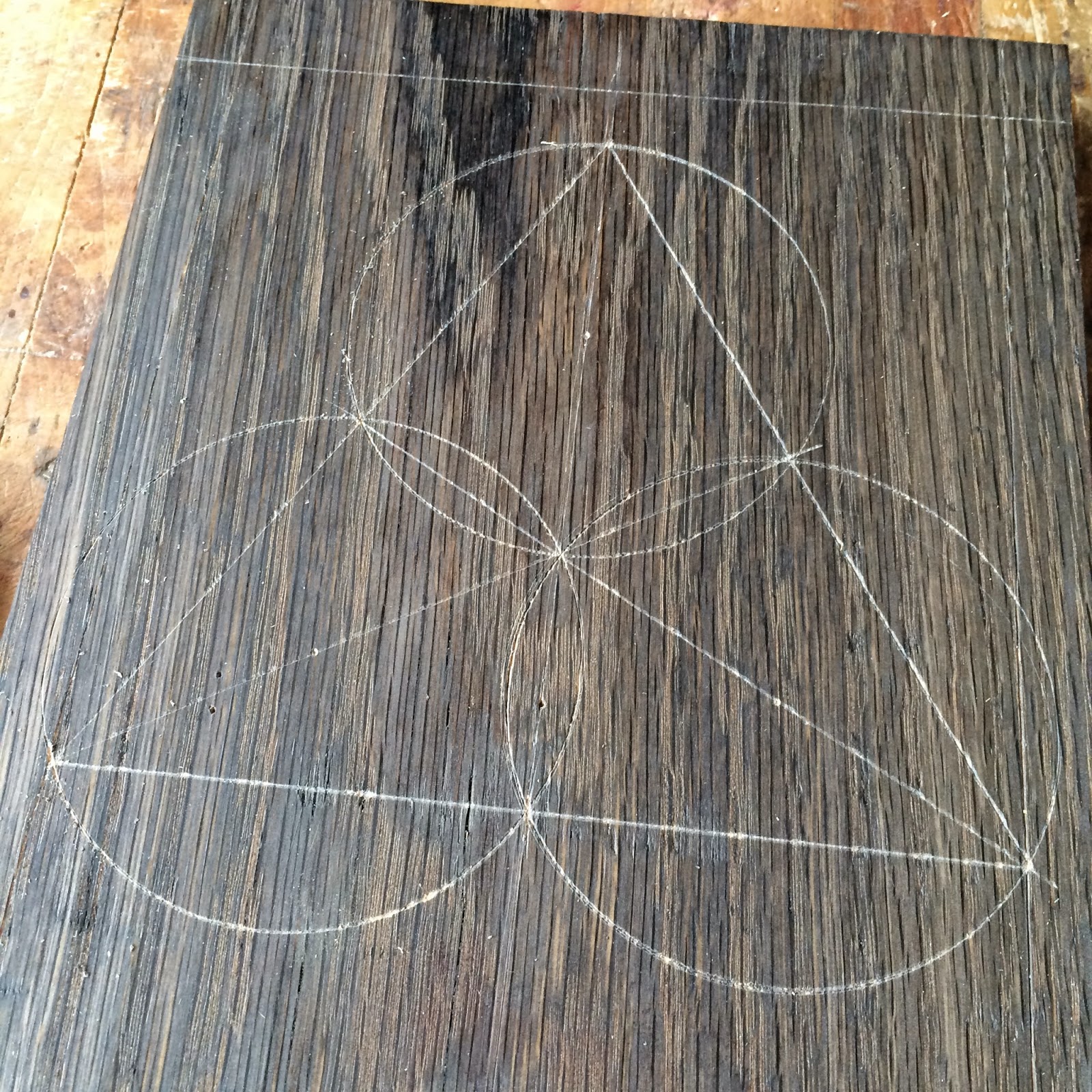 I didn't want the box to smell like a pickle jar every time the lid was opened and the dried iron buff left a light residue that would rub off on my hands. I solved both of these issues with a coat of clear shellac.

I was curious how deep the buff had penetrated and the best way to figure it was to carve or cut into it. The geometric designs I came up with crossed a line into new territory for me. 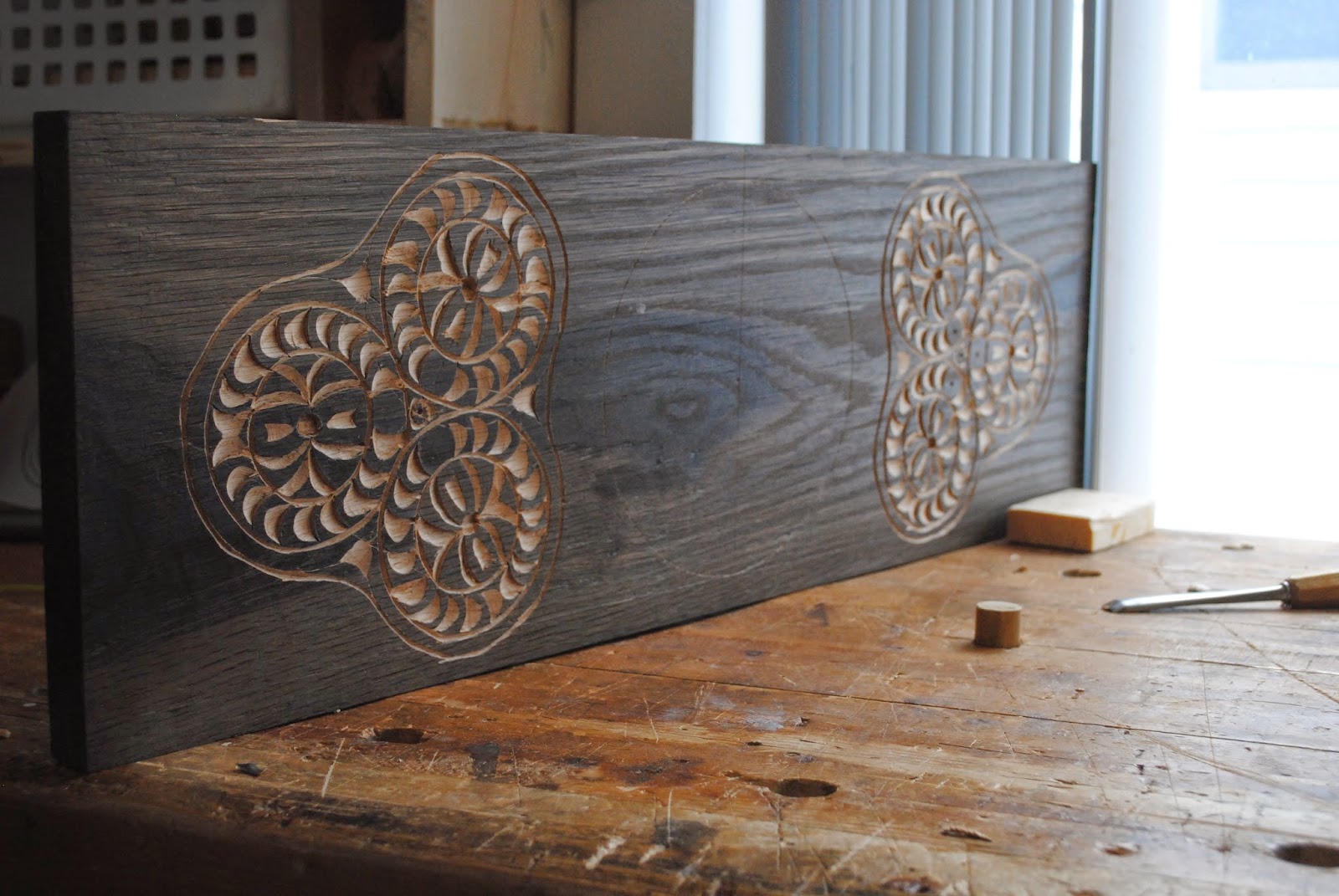 A combination of 17th century techniques and influences of gothic tracery mixed with a lightly botched initial layout led to something terribly unique yet balanced in a pleasing way. I wasn't sure if I liked it at first but after passing by it In the shop for several days it's really grown on me. 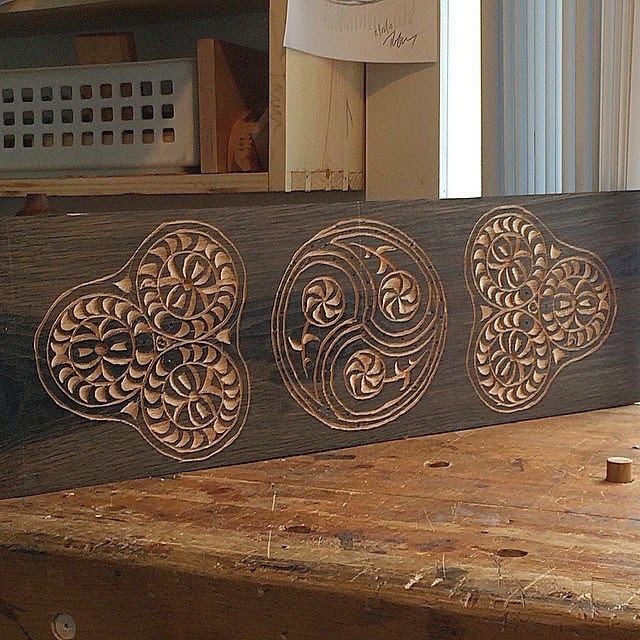 This may be the first carving I've done that I will be sad to let go of.

Experiment in your shop. Accept the accidents and mistakes, roll with the punches, and you may just really like what turns up.