I've been thinking about moulding planes, hollows and rounds, and planes in general a lot lately.  I've been psyching myself up to possibly make a few in the future but I tend to let ideas digest for a good long while before I act on them. A big part of the marinating process is researching until I feel like I have a solid grasp on the whole concept and can visualize it in my mind. Moulding planes will deserve a significant amount of this navel gazing before they come to light.

I spent a while the other day perusing the profiles in the Benjamin Seaton Tool Chest book and later that night cracked open my copy of "The Book Of Plates" from Roubo's "L'art Du Menuisier."  I love pulling this book down and looking inside, every time feels like an occasion. The plates are packed full of information you don't need the text to decipher.

I started by looking at the moulding planes 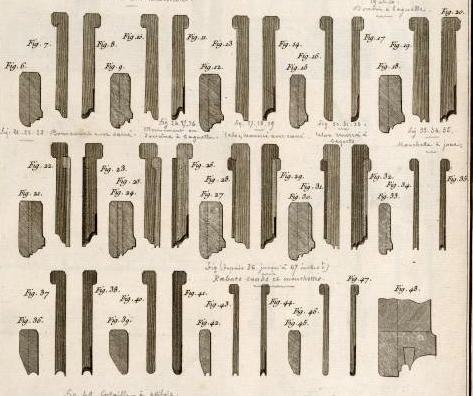 Besides the feelings I have for this book (this was starting to turn into a love letter) I started to wonder why it has seemed somewhat . .  . passed over. I'll admit I'm not the most connected person among the modern hand tool making glitterati, but do read quite a bit about whats going on, (outside the woodworking forums, I have vowed to stay out of Mordor as much as I can resist)

There was the initial sonic boom as the book landed in people's mailboxes, but shortly after that settled down, I've heard next to nothing. I certainly would have thought, by now, we would be seeing more representations of the tools shown on the plates. Following the effect of Plate 11 and it's workbench, I thought there'd be more showings from Roubo's tool chest on the horizon by now.

I know we've accustomed ourselves to the English and American style planes of the last few centuries and the modern maker's efforts have been to reproduce these familiar and effective tools. but there is something different about the planes Roubo is showing us and it seems to me like it's been passed over as part of a really cool book and that's about it.

Looking at the plane profiles above I'd say these planes, the complex moulders and beaders, are used perpendicular to the surface instead of the skewed angle I've become accustomed to, but the blades are bedded at a skewed angle. I also see more evidence of sidewall blades or "nickers" but there is a ton here to be explored.

Even the Kerfing Plane may not be as novel as we've thought. Of course this could be a dado or stair saw, but in the lower corner of the plate shows two men working at benches and one of them is resawing a board with a bow saw. It's been my observation that when these guys show up, their work is related to the tools shown in the plate, thought they are often not using the exact tools in the plate. 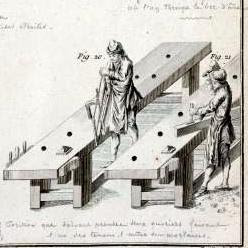 These tools, more that the moulding planes, deserve to be built and explored by our hands. Some have made the tools he's shown. Brian Eve over at Toolerable made some planes I like very much. Heck I got an article in Popular Woodworking from the veneer press vise shown on Plate 280. There are a few others out there but I haven't seen as much as I thought I would, especially from the tool makers, and that's a shame.

I may just have to explore more myself, there are, of course, other things to do first.