Tie Enough Strings Together And Make A Nest.

Writing something down in ink carries a burden. It had better be right because the only way to change it is to cover it with more ink, a lot more ink. Printing ink in a book for others to read. Doubly so.

Maybe some don't feel the same way, but I'm not interested in half-assing this job. That means searching down clues that may or may not even end up in direct print. They'll be there, in the subtext, between the lines, and in the assurity I know what I'm writing about. Sometimes I wish I could afford a couple of researchers to help me comb through the homework and pull out the highlights. Then I remember I'm doing the homework for my own benefit more than anything. I understand no amount of research or knowledge will protect me from critics and naysayers. But I want to know I've turned over every rock I could get my hands on before I commit to ink.

This process is dragging on a little longer than I thought. I had first hoped this would be a year long project and I'm seeing most of year two in the rear view. It's ok. I'm happy and feel like I'm getting it right. Hitting notes that ring truthful over rehashed hyperbole.

I've got two more books arriving in the mail soon and I have one more nearby college library to haunt for a day and I'll be (mostly) out of the research phase. (It doesn't really end, but you have to draw a line somewhere) Just a window into the work, the last few evenings I've spent several hours hunting down threads in ancient Egypt.

It's a line repeated so often when I read about medieval furniture it almost gets to sound like plagiarism, yet I'm struggling not to include my own version. It goes something like, "It is amazing that we know far more about the furnishings of ancient Egypt than we do about early medieval Europe." But there are some similarities in clues that I see in depictions of shipbuilders at work. 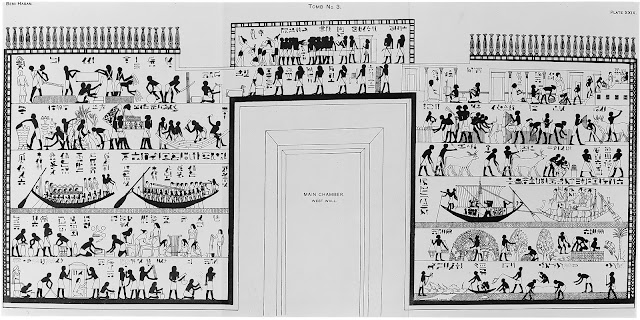 Here is a mural from Tomb 3 at Beni Hasan, Wikipedia calls this place simply, "An ancient Egyptian cemetery site."  Tomb 3 is the resting place of Khnumhotep II who reigned during the 20th century BC. (That's almost 4000 years ago.) Second line down on the left you see a scene that was familiar.

Shipwrights, cutting down trees on the left (probably) with bronze axes, and building a ship on the right. I can't make out for myself what's in between but one of the dudes looks to be carrying a nice axe. (nor can I tell whats going on with the antelope or gazelle on the far left, it looks illegal without a permit in 46 states)

This was a familiar site to me, not because I grew up in a bronze age family building ships when other families were watching Dallas. Instead it came from my years of fascination with the Bayeux Tapestry which depicts the Norman conquest of England and the Battle of Hastings in 1066. When I saw the mural above I immediately thought of this.

William the Conqueror's men building boats to sail across the English Channel and invade. I particularly like what looks like hewn boards set in the branches of the middle trees, maybe with some stacked along the ground. Personally I'm not sure I'd snuggle a board into my no-no space before hewing away, but then again maybe it'd help. 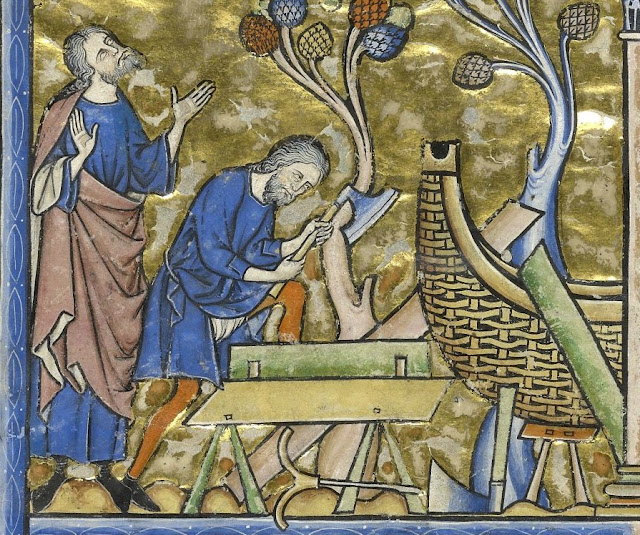 Push on further to my current obsession and subject of my book, the Morgan Bible and Noah hewing a board, also leaned against a tree circa 1250 AD. Right in the same time frame as THESE IMAGES from Chartres Cathedral's stained glass were created.

The point is wood is the same material now as it was then, even if then was 4000 years ago. It's only efficiently worked in a handful of ways. You need to measure it, saw it, drill it, shape it, smooth it, and decorate it, and the tools that accomplish that don't need to be varied or different in general. And people still have the same needs and wants from wood. Chairs need to sit right. tables need to not fall over and spill your beer, surfaces are supposed to be smooth enough to touch and our eyes are all drawn to shine.

It's amazing we know more about furniture in ancient Egypt than in medieval Europe, but it's also amazing that we fail to draw the lines of connection between the experiences then through to our experiences now. We have more in common with our past than our egos will let us believe.