Put A Medieval Finish To It 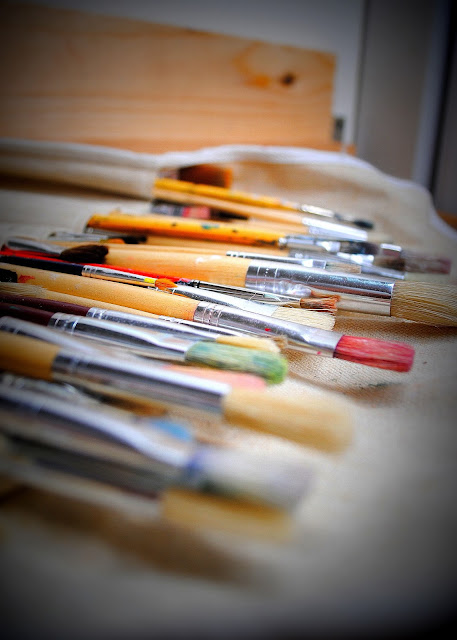 If you're expecting dovetailing or panel raising . . .today's just not gonna be your day here either.

If we know very little about actual medieval furniture, then it goes to reason we know even less about the finishing of these pieces. Guesses and assumptions can be made, but there is little to say for certain.

What do we know?

Percy Macquoid writes in "A History of English Furniture" That furniture represented in MS Miniatures is often colored, combine that with traces of paint remaining on surviving pieces and supposition says domestic furniture was painted, and often in bright colors. He goes on to say "These colors were mostly rendered in some form of tempera or wax."

Penelope Eames in "Furniture in England, France, and The Netherlands from the Twelfth to the Fifteenth Centuries." tells that painted chests were common with red and green as favorite colors but some references to white, yellow, and black exist.

Of course there is gilding as well. The application of gold leaf to a prepared bole field. Something I will have to become somewhat comfortable with to pull off the Sella Curulis or Faldstuhl shown in the bible. 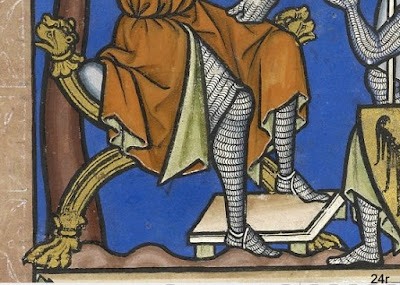 Then there are techniques done in and with Gesso. Gesso is a background medium, In a modern sense it's a chalky acrylic paint best known as a background treatment for artist's canvases. It gives a smooth texture that also has "tooth" or the ability to hold the pigments well as the paint medium dries.

In a traditional sense Gesso is a combination of size (hide glue), water, and whiting (fine chalk or marble dust). It's a thinner substance than the gloppy modern stuff and many more coats are required to build up a field. It's an important background in gilding and painting, but the medieval mind used this traditional mixture more effectively than art class taught me was possible, maybe because it's not easily possible with the modern stuff. 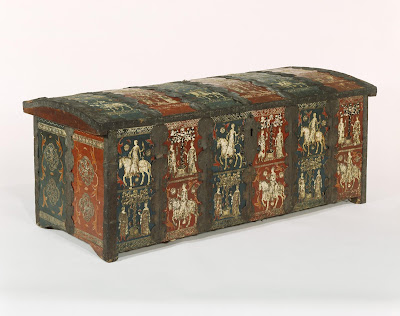 The fantastic chest or Cassone is Italian from around 1350. It lives in the collection of the Victoria and Albert Museum. (317-1894) 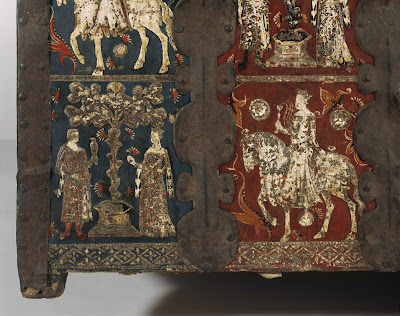 It has the iron strapping and red and blue colors that are still vibrant after nearly 700 years, but it's the white figures that draw the eye. The figures are raised from the surface and many are repeated over and over. They come from shallow stone molds into which gesso was poured and allowed to set. Then once the casts were nearly dry they were stuck to the gesso already applied to the carcass. A miracle not possible without the wonder of animal protein glue.

Another take on this concept was to build up a very thick layer of gesso, then work back into the field and relief carve away an image. 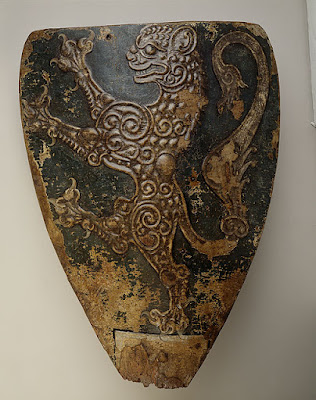 This shield survives from the early 13th century and lives in the collection of the Swiss National Museum. (LM 3405.178) The rampant lion so prominent was built up and carved away in such a way before being covered in silver leaf. It must have been a powerful symbol of status in it's day. Bright reflective silver set off by a brilliant blue background.

But we haven't even spoken about the rabbit hole of paint with the multiple recipes for both tempera and casein bases. 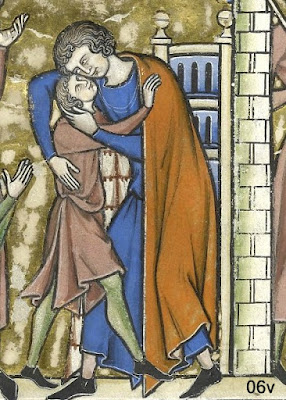 The problem isn't with options, obviously I have those and I have a bunch of experimenting to do. The problem is I figure it'd take me another lifetime to chase down every lead and work out every possibility and though I may eventually walk those paths, I don't want the creation of the book to wait that long.

I've narrowed myself down to a handful of trials to undertake over the dead of winter. I'm going to work in:

I hope I gather enough answers and knowledge to write intelligently about it. Starting tomorrow I plan to start practicing at the draft board, drawing some medieval design motifs from the great source; The Grammar Of Ornament. (A fantastic source: check it out HERE) 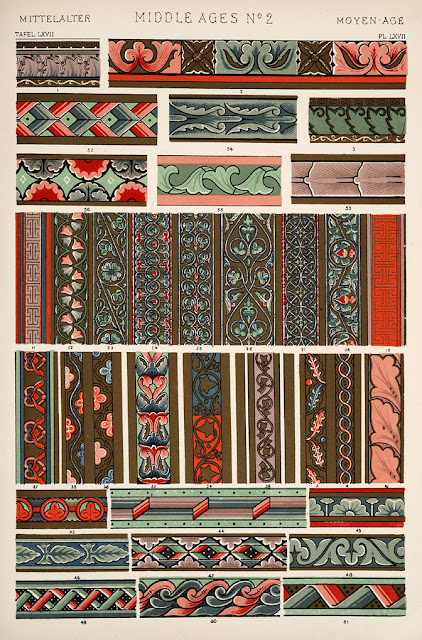