I've Got A Dutch Tool Chest and A Plan.

Popular Woodworking published Chris Schwarz's article on the Dutch Tool Chest in the October 2013 issue. If I had to guess without researching I'd say he spent about a year writing about them on his blog and using them in classes before the article. From my vantage it's a popular thing for people to build, it's simple and looks good. It has an unique, dare I say iconic shape to it with the sloping lid and it has enough storage inside for a reasonable kit of hand tools. 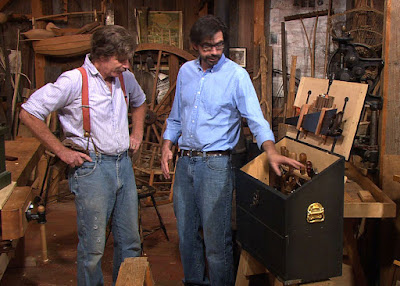 So what if I'm three years late to the party.

I needed a new chest to take along to demos that carried a larger tool capacity than the small chest I've used to this point. (Besides, in an attempt to fix something I didn't like, someone lost their temper and it met an unfortunate, though timely, death.)  I want to set up at fairs and events to build and finish a piece of furniture in a day, all by hand. Large boarded chests, carved boxes, staked chairs . . .  you name it.

I have found when people see hand tool woodworking, it's like watching a magician. There's similar wonder involved, they just don't think such a thing is possible. The more recognisable names in magic in recent years have become so by taking magic off the stage, killing the over the top productions, and taking their sleight of hand to the street in front of small crowds. Basically bringing magic to a populous who might never think of attending a formal show.

As someone who spends a lot of time thinking and writing about woodworking (and aspires to write more) I am aware that most of my audience is made up of other woodworkers. The discourse is satisfying and there are ideas to trade about and friendships to be made. The downside is, it's preaching to those already converted.

The most frustrating conversations I have about woodworking are with people who have no real touchstone to it. The question I hate the most is "What kind of woodworking do you do?" because they want me to say things like "I make chairs." or "I reclaim boards from old barn sides, run a wire brush over them, then drywall screw them together and sell that shit at holiday craft fairs."  It's difficult to explain "I like to build carved furniture based on forms abandoned after the 17th century, oh and I'm currently researching and writing a book on medieval furniture." because the average person has no connection to the words I'm saying and they don't fit into the soundbite conversation they want to have.

"Hey Derek, I hear you do woodworking."

"I enjoy making sawdust. Why?"

"Do you sell anything you make?"

"Sometimes. Why?" (I still always ask even though I know it will be awful. The Dictates of the Social Contract are difficult) (Warning: The link is full of NSFW language)

"I saw this collapsible outdoor wine caddy made from a 2x4 on Pinterest last night. It had a really cool finish where the guy burned the wood so it had these dark lines. Have you ever made one of those before?"

"How much would it cost to have you make one?" (Though they're not really that interested, it's an impulse buy and if they had to wait even a week they'd be on to the next shiny thing.)

(I cop out) "I'm sorry I'm so far behind on things in the shop I can't take on more right now. When I get caught up I can look at it if you're still interested."

Does this conversation make me elitist? Probably.  Does my part in it make me an asshole? Most definitely. But it is so difficult to explain what I do when at most they've seen Ty Pennington and pals whip up a whole house full of special tricks and treatments in an hour of prime time television. The thought of making is such a radical idea when for thousands of years of human history it was the only thing we could really do.

The other side of the coin is people hear I work mostly by had so they assume I pour hundreds of hours of work into a piece.

"Wow, that carving is really intricate. How long did it take you?"

"It's a pretty good sized panel, all told three to four hours."

"No way. Did you say all by hand?!" (looks at me like I somehow cheated)

How do you re-introduce people (who are not already converts) to this concept of making, and making efficiently without compromising quality or design.

I think you pretend to be David Blaine and take it to the streets. You practice it a little, do a couple dry runs, memorize a bit of a script and make a show of it. Different from David Blaine, I wanna show my trade secrets, I want you to find out it's not magic, it's not mysterious. It's a totally possible and doable by everyone who has the gumption to pick up a tool.

I may be way off base with this whole thing. The Dutch Tool Chest I've built is the first step in creating a mobile platform to work from.

Chris's knockdown English Workbench will be the second.

The next several posts will cover my take on the Dutch Tool Chest.