The Art Of Inquiry

"What is the relation between thinking and making? To this, the theorist and craftsman would have different answers. It is not that the former only thinks and the latter only makes, but that the one makes through thinking and the other thinks through making. The theorist does his thinking in his head, and only then applies the forms of thought to the substance of the material world. The way of the craftsman, by contrast, is to allow knowledge to grow from the crucible of our practical and observational engagements with the beings and things around us.

In the art of inquiry, the conduct of thought goes along with, and continually answers to, the fluxes and flows of the materials with which we work. These materias think in us as we think through them. Here every work is an experiment: not in the natural scientific sense of testing a preconceived notion, or of engineering a confrontation between ideas "in the head" and facts "on the ground," but in the sense of prising an opening and following where it leads. You try things out and see what happens.

...To practice this method is not to describe the world, or to represent it, but to open up our perception to what is going on there so that we, in turn, can respond to it." 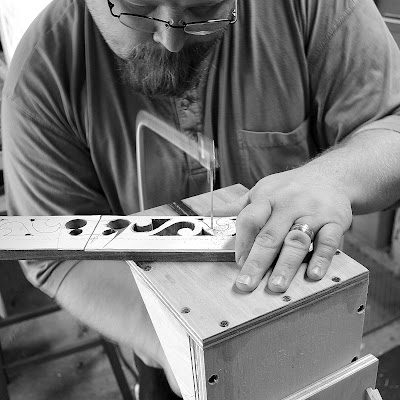 After a hiatus of the mind and spirit I am back on the hunt to finish my book documenting the medieval furniture shown in the Morgan Bible. I have to put my butt in the shop and make some sawdust, but reading this book by Tim Ingold has helped me frame the picture, so to speak, for the arguments the book will hopefully make.

For the first time since I've sparked the idea I have a working title for the book. "Correspondance With Kings: Medieval Furniture in The Morgan Bible." I know a working title does not equal a book - but it feels like an important step as the title frames the argument.