When The Muses Strike Hard

I believe in the line the the Muses will help you in your endeavors, but it is best if they find you already working. Inspiration comes at the sharpened point of effort.
...

I don’t have a mountain of experience to talk, but so far I’ve found it easier, even beneficial, to work on two chairs at the same time. I end the run with a matching (sort of) set and I’m able fix my technique between moves and spread my amateurishness out between the two. Each has surprises or mistakes that I will further refine on the next chairs but neither has ALL the mistakes nor ALL the refinements.


I’ve been working on a pair of versions based on the Bodleian Chair. The legs I turned felt too weak against wracking and twisting so I decided to add an undercarriage. The imediate idea was to pull off something like this 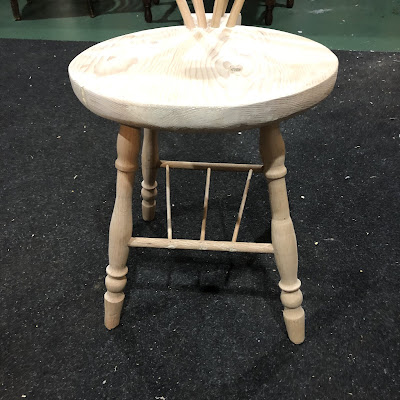 A fan radiating from the front to the back repeating the fan style of the rungs for the chair back. In further iterations I will probably make this fan more pronounced but it does work here. Repetition is an important feature in good design. This was a good idea.

The issue is on the second chair I lost my mind for a moment and drilled the undercarriage in the wrong orientation. Sadness, rage, and self loathing ensued. 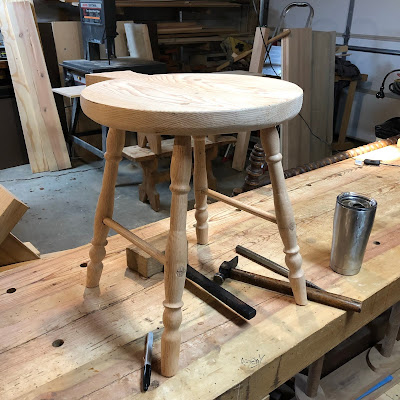 I resolved to carry on but take it as an opportunity to stretch my design reach on this. I may be too early to chair-making to have earned the right to experiment, but I’ve never been good at waiting for permission. While I finished up the first chair I pondered and wondered and sketched. I was trying to find a good idea to marry the chair together. 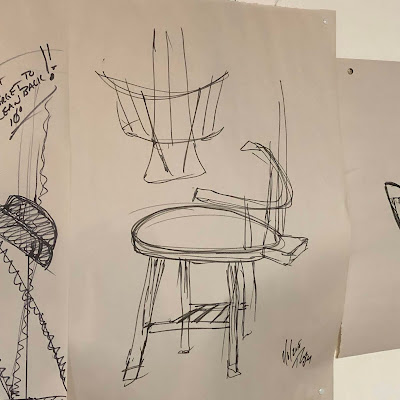 Last night I was nearly asleep when I suddenly juiced awake. The damn Muses has struck! I went down in the study and grabbed a page pad of newsprint paper and a Sharpie. I sat right there on the floor and started gesture drawing a bowed back with a high headrest similar to some Welsh Stick Chairs but with less dramatic pronounce to the bow. Shallower and less encompassing to work with the smaller butt-print of the seat.

A ladder of four finer crossbars to the undercarriage worked with this idea. But then the bow of the arm began to “swoop,” leaning down towards the back and up in the front. It doesn’t reach far enough around to become true chair arms, but there’s some good movement in the swoop. 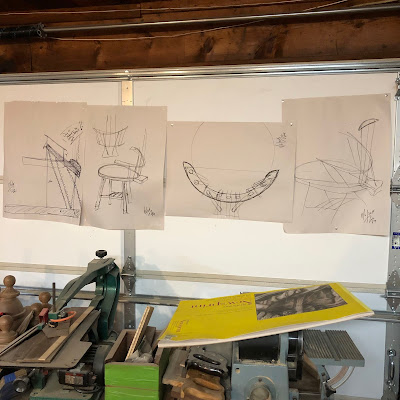 Then I found myself out in the shop. Pad of newsprint paper, sharpie marker, bathrobe, pajama pants and slippers with an ambient temp around 50 degrees.  I was tracing the seat and refining the bow, I was taking measurements and making additional gesture drawings. I was going over my stock of plywood to start mocking up the arm bow.

“This is ridiculous!” I thought. “I’m cold. It’s nearly midnight and I shouldn’t be running the bandsaw like this.”

So I grabbed some push pins and hung the gesture drawings on styrofoam insulation on the garage door. Went inside. Swallowed some melatonin with a small glass of milk and played mindless games on my phone until sleep stole me away. 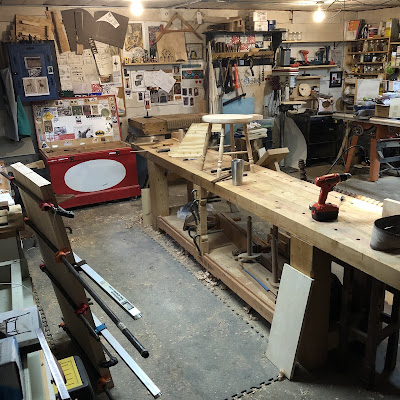 This morning I’m still excited. Still energized for the idea. Sleep has tempered the dramatic lean of the swoop I was envisioning last night but some playing with plywood should help me work out specifics. The gesture drawings might not look like much but they are a useful tool for loosely dropping ideas on to paper quickly. Often a line here and a line there will refine into something wonderful and the amount of movement you can achieve in them is important.

This is exactly where I want my work to live right now. There exists a sweet spot between the vernacular and studio style pieces (with a dash of folkish play on top) and this idea lives right in there. I can’t wait to see it exist and I can’t wait to refine it further.