Knolling: The art of organizing similar items into the same space and arranging them in neat rows and lines. A well known and understood process in the Lego building circles I find it amusing that it was born in a woodworking shop (at least the name was)

Here read this article from MAKE Magazine "Zen and the Art of Knolling" Then come back. :)

As I've explained sometimes in the past. I make my living setting up and organizing surgical instrumentation so it can be handed quickly and promptly to a surgeon. Imagine the scenario where the surgeon is asking for the aortic clamp RFN and the poor schmuck in my shoes has misplaced it. Bad news for everyone.

I've done the job for 20 years, I'm reasonably proficient at it, and I've always done fairly well in my shop too. It has on occasion gotten out of hand, but no one's life was in danger, just my sanity. About a year ago I started the process of reclaiming the shop from entropy by adding some cabinets in place of an underused workbench and building a new way for me to sort out my hardware and small parts in the shop 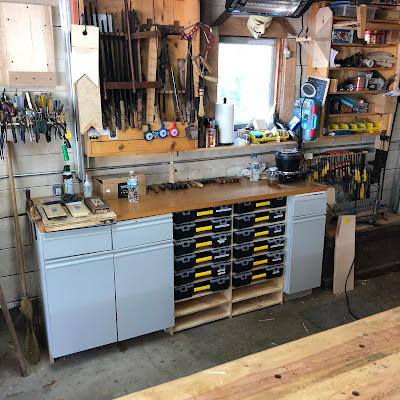 A year later I love how these "drawers" work. I have some for specific hardware, say wood screws, and some for specific jobs like "chairmaking" where I can collect job specific tools, pull out the bin and go to work. and the lids keep things dust free!!

I had plans for more, and I worked on things a little at a time. Some shelving here, a few storage totes there. But the recent injury forced the issue because the really time consuming things, like this. 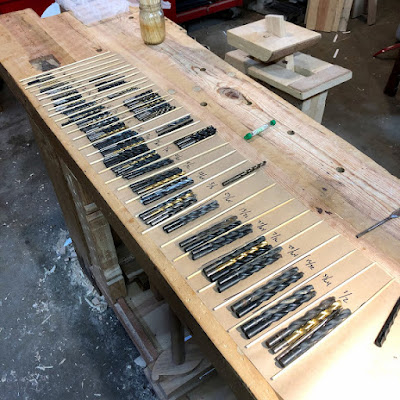 Sorting drill bits. At least it means I'm in the shop!

The other change was my nonagenarian grandfather was finally in a position where he had to sell his home and move into assisted living. (up until last year he was still working part time) There was a big sale, and I bought some things and he gave me some things, But I came away with a sears cabinet to move all my automotive tools too. 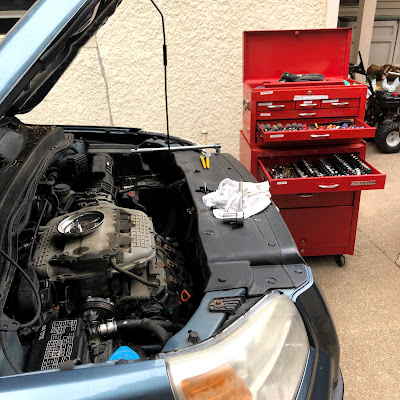 That freed up the sears cabinet I had been using to relocate woodworking items into.

The other item was this nest of drawers 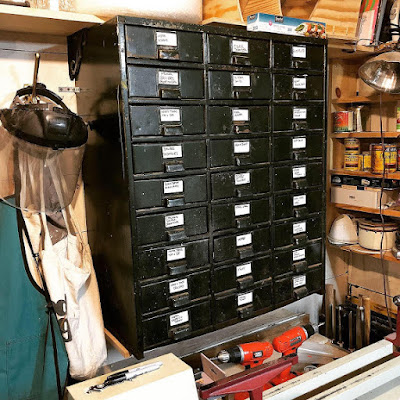 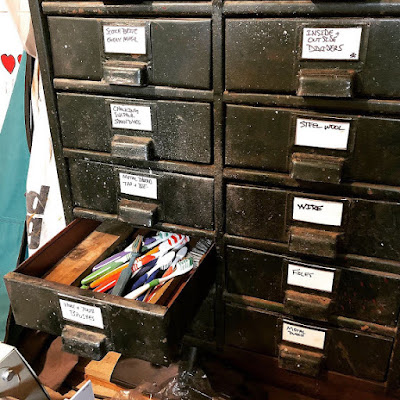 He worked all my life in an auto parts store, I wouldn't be surprised if that was where this bank of drawers originated. I had started to rehab the piece, riveting some of the wounded drawers and painting the sides and inside with rust prevention/restoration paint. I left the outside and front especially untouched, maintaining the green enamel paint grandpa used, along with all his wear and tear and paint spatters.

My oldest daughter helped me finish up the repairs post op, once I was down to one wing. and she hung it on the wall for me. I then spent the next week or so filling and labeling the drawers, cleaning up one hidden pile after another.

Then I started to add totes to a wall shelf. 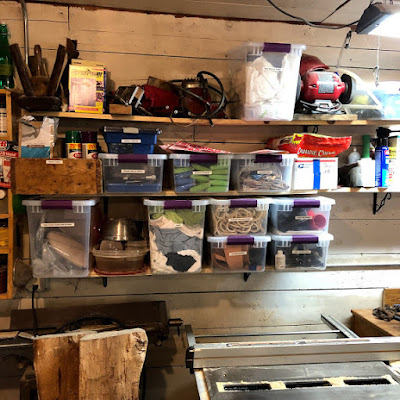 There's even several more now since this photo, and the bottom shelf has been replaced and extended to match the ones above.

Then there was the older sears cart. It was a week and a half process of decision making and knolling but I organized all my drill bits from a shit situation like this. 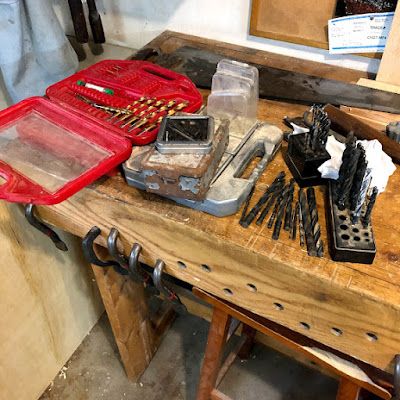 Into the cart in the next several pictures: 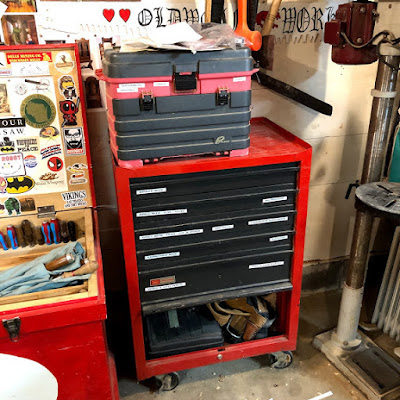 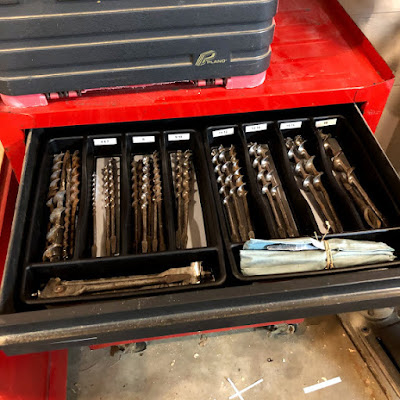 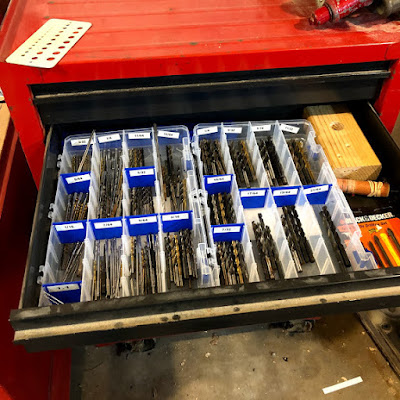 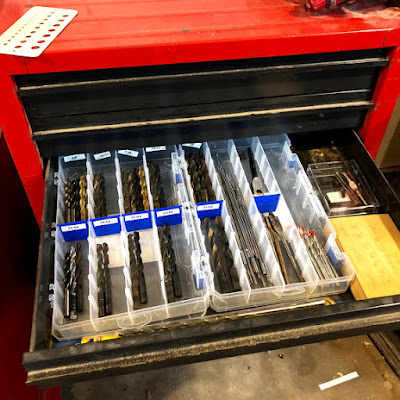 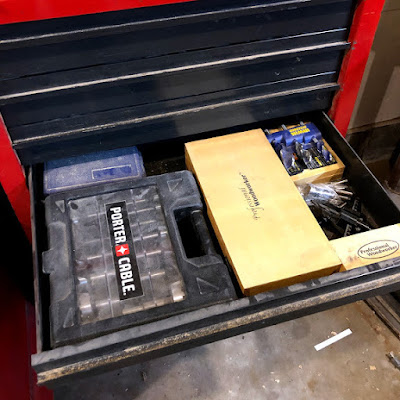 This includes,but isn't pictured, organizing out all my screw driving bits into the plastic drawer chest on top. That took a whole day.

The next step was the metal working area. I had a bunch of this hanging on the wall with nails but was unhappy with the way it worked. I pulled it all down and made this mess. 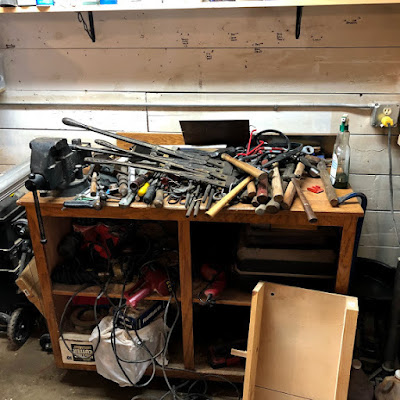 I dislike pegboard, but decided in this instance it was probably the right solution. As I get more into blacksmithing I'm sure my hammer collection will grow and the peg board gives me the adjustability I'll need.

I decided the MDF board would just not hold up over time. The items I was asking it to hold were heavy. So I decided I should go with the steel diamond plate but I hate that even more because it's the crap in every douche bag's "Man Cave" to hold their Commemorative NFL Bottle Cap Opener collection.

As I complained about this my oldest subtly suggested, "Well you could paint it instead of bitch about it."  (pretty sure I raised them to be too much like me)

So paint it I did!

And it does look and feel better. The Oldwolf Workshop Heraldic colors of Gules upon a field of Argent. She was right of course. 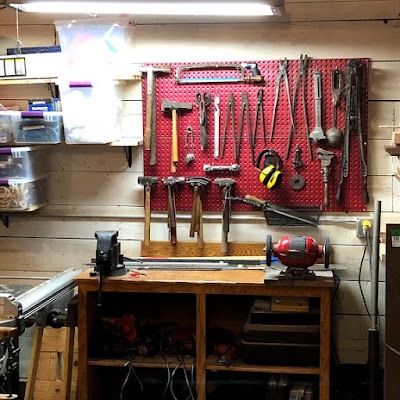 Then we cut up some PVC pipe to make an organizer for some of the metal stock odds and ends I have. 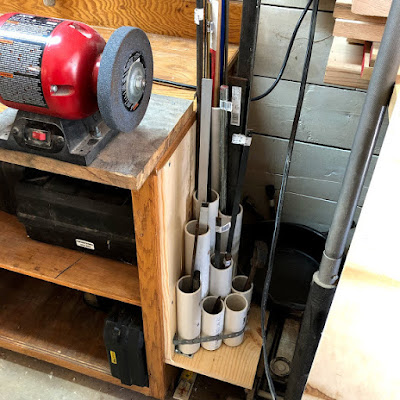 Then I took to organizing the hand held power tool cluster beneath the metal working station. (reference photo above) 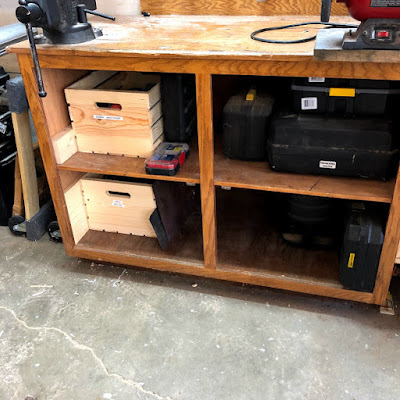 This meant organizing my router bits from this pile: 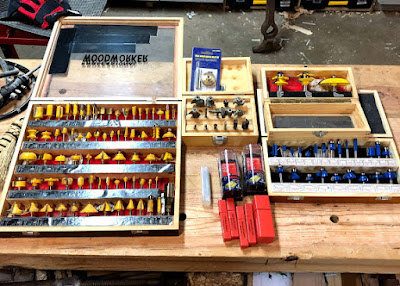 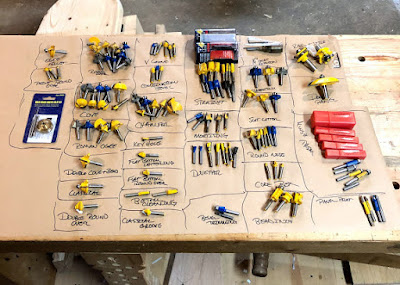 To buying a few more of these Stanley Sortmaster cases. (not quite Sortimo but a lot more economical) 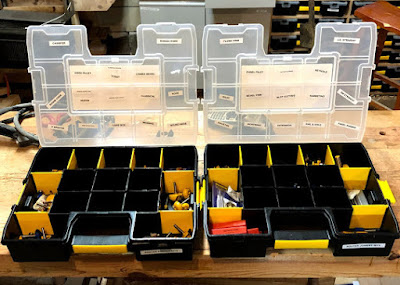 And my son helped me make a "wine rack" holder for my propane torches. 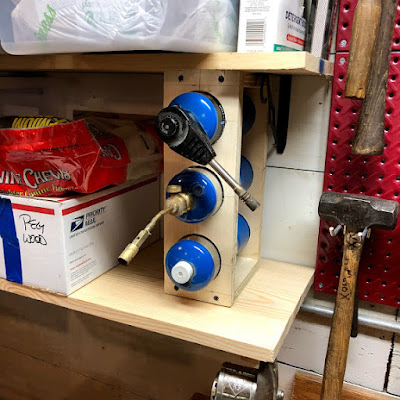 There is one more area I don't have a picture of. a secondhand bench that I have my belt sander and a scroll saw mounted to. I'm thinking of getting rid of the whole thing but first one end is covered in about 42 different extension cords.

How did I get so many extension cords!!

It's never-ending. It'll be never-ending. But at this point it will be so much nicer and more photo ready when I step back into the shop (In September...yikes) and refocus my energies into medieval furniture.

I'm so looking forward to it.