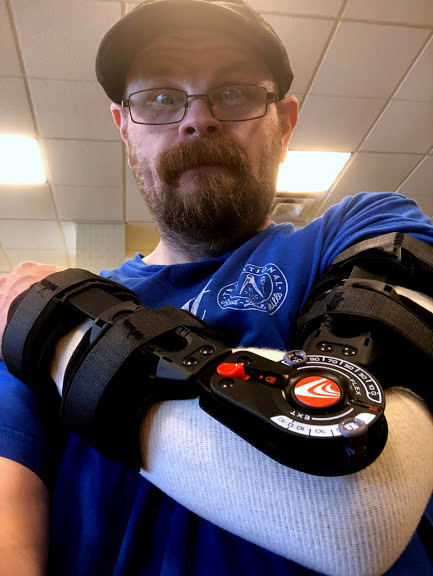 A few weeks ago I upgraded from a splint, to a motion limiting brace that I think looks like a starter kit for an Iron Man costume. It limits my elbow from 60* to 110* and I wear it 23 hours a day (give or take a half hour or so) It is SOOOOO much better than the splint but I'm still on a weight restriction for the arm of no more than 2-3 lbs.

At first I thought that restriction would still allow me to carve, chisel, saw, and do most things. Then as I thought through the steps I realized I wouldn't be able to effectively plane. What is hand tool woodworking but 45% plane work. I'm not interested in figuring out work-a-rounds and accepting less than my usual standard (which is questionable anyway) I'll just wait it out.

So I have the time to write. . . so what else could I possibly be doing?

An Answer in Three Parts:

The first part is that writing here only makes me want to go work in the shop more. The two activities have always been connected, always will be for me. It's tough to get the juices flowing, so to speak, and end up being blue balled out due to physical impotence. Tough on the ego in all situations.

I've been in the shop some, that will be part three, but it's not as invigorating as you would think.

The second part is I have been writing, quite a bit actually. The woodworking books I'm working on creating are centered on the building of the things in them. Something I have put on the back burner as other people's projects and commissions have come up. I've always liked saying No, I'm pretty sure once I'm back on four wheels I'll be doin that more.

I've got medieval furniture to build. 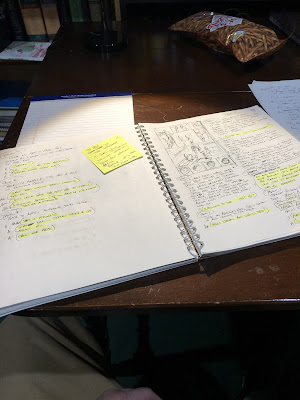 In it's place I have been writing, but fiction, well not nearly as high brow. I've always been a comic book guy, even when it wasn't cool and I was scared to admit it in mixed company. I've started a dozen fantasy novels over the years, finished a few that I burned, but I've had one story I've batted around since my early 20's that has stuck in my mind persistently, but has never found a proper format for expression. Something about this time in the saddle made me decide to try writing it as a comic book script, something I can even illustrate myself. And for the first time in a long time, the story is flowing out of me in the partially organic way fiction seems to flow.

Maybe it will really become something, maybe it won't but I'm excited about it and I'm making something and that's important.

But there's just only so much time I have possible, and so many words in a day before I feel tapped out. I'm a lot more George R.R. Martin to Chris Schwarz's Steven King. (I can't help but add this video clip here, I love this exchange)


The third part is the fact I have been in the shop. But not how I really want to be. I find myself in a position for the first time, where I have nothing better to do than shit like sort out drill bits.

I have always kept an orderly shop, mostly. I work in an Operating Room to put food in my children's bellies, I do clean and organized very, very well. But this post is too long already, So I will put up a second post. Right now. Following this one. focused on the photo heavy journey of shop optimization.