I have been relatively quiet here on the blog the last few weeks, but that is because I have been playing a little online cloak and dagger. (I can't say that without thinking of the old Mad Mag cartoon Spy vs. Spy) Once a year, for the past several years the medieval reenactment group I'm involved with, Tribe Woden Thor, has commissioned me to build a member's appreciation gift, we call it the Chieftain's Gift. It's to celebrate the individual who has either grown the most in the organization over the last year or has contributed the most effort.


The reason for the cloak and dagger is that all the folks in the Tribe know about my blog and check in here from time to time. The Gift is supposed to be a surprise and so I haven't been able to talk about it much, if at all, but it goes to the deserving soul this weekend and that frees me up to post about the piece and the build. This year the recipient is Ed Hamilton, or as he goes by in the group Gunnarr Ulfrekr. Ed is a good man and a good friend and I wanted to make sure I did something that was a real tribute to him. He's been teaching himself to be a blacksmith for a while and it's something that really fits him well, watching him work a forge is a lot of fun (I can hear the woodworkers out there, especially the galoots, salivating at the thought of having a blacksmith for a friend, I agree I am a lucky man)

Most of the time the Gift has been a chest of some variety, there has been some different pieces, but a chest is a popular item. They store your stuff at home, carry your stuff to events, are a nice place to sit down. Very versatile, useful, and importantly medieval. I have built many six board chests, and a couple of dovetail chests as well, and I wanted to do something a bit different. I thought about Ed's work as a blacksmith and how that related, I wanted something that would be strong, heavy and well built. Something he could use to carry his tools to events if he wanted. A little research and I found this chest. 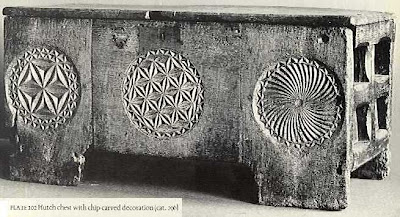 It is called a hutch chest and it spans the time period between the weaker construction of the six board chests and the 15th and 16th century innovations of a joined chest. (See a very cool article on medieval chests put together by another reenactment site Greydragon.org, and if you want more info on later period joined chests I recommend Peter Follansbee's blog) There are several examples out there but on this one the sides intrigued me as much as the construction and carvings. Handles on chests is a difficult thing, functionally they are often a necessity, or at the very least nice to have. Aesthetically they can be difficult to pull of and not be a detractor from the overall look and design of a piece, Chest handles have to look right to work well and that means sometimes dropping a significant bill to pick some up and even then, that doesn't always help.

Its tough to discern exactly what's going on with the side of the chest from the pictures I've found. It could be handles carved out of the wooden side, it could be pieces added in and mortised in place. They could not be as deep as I think they look. but to my eyes it appeared to be a handle integrated into the construction of the chest, That got me really thinking. I made several measured drawings to play with proportions and came up with something I was happy with. 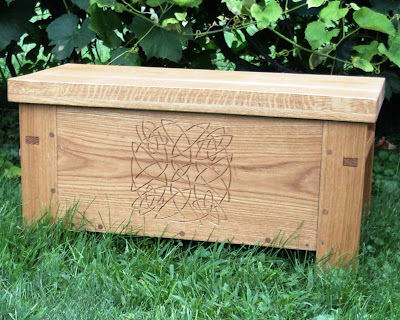 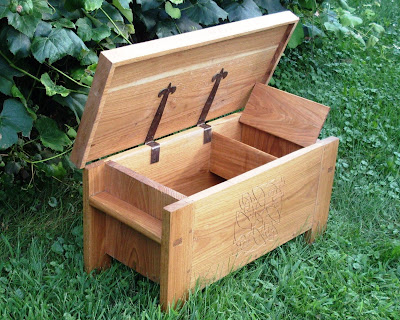 I thought about wood species and decided that I wanted to play with some white oak on this one for several reasons. One is that white oak is a very correct wood for medieval furniture. I understand as a green wood it is fairly easy to work, I have to say the kiln dried stuff I was able to get my hands on, wow it was often a real chore to work, lots of sweat that was worth it in the end. The other reason is I had never had the pleasure of working white oak before and I wanted to get to know it a little. I had done plenty with red oak and I wanted to see the difference. The seller at Big River Lumber told me the white oak would take more effort, I didn't doubt him at the time but I do have to say he was right. What was the coolest thing though was that I was able to get a hold of the stuff in the very raw cut form. just over an inch thick and hadn't seen any part of a plane yet. Sawn, dried and beautiful. I had never worked down something so rough before either.

I have gotten to see one true medieval chest in person, in a museum in Madison there was a 14th century Italian Cassone. These chests were big pieces often richly painted and gilded, owned by richer merchants and used by rich families as dowry chests. 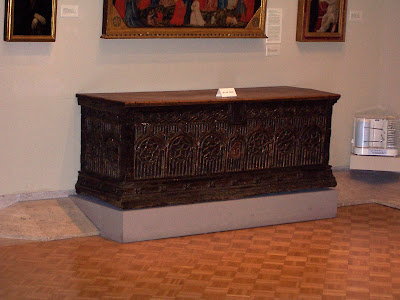 The pictures I can get my hands on now don't reflect it so much but In looking at the piece up close, even though they were made and used by the rich and wealthy (there was still small evidence of extensive gold gilding on the wood) you could see light evidence of the saw marks from the initial sawer cutting the wood into planks. That was never worked away and I really liked the feeling it gave to the piece, the texture was special and evidenced the work that had gone into the transformation from tree to chest. With finding the rough cut wood I was able to bring a bit of that into the piece as well. I left just a touch of the saw marks on the lid, where its fairly obvious, but I think its still pretty subtle and doesn't detract from anything. 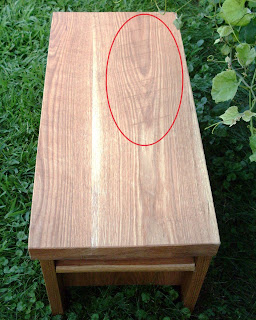 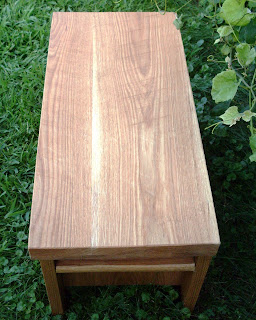 Often I will carve a piece like this quite a bit, but I also made the choice to keep that simple this time, with a single knotwork medallion in the front. The top begged to be carved some as well, but I resisted so I could let the sawers marks tell their own story there. 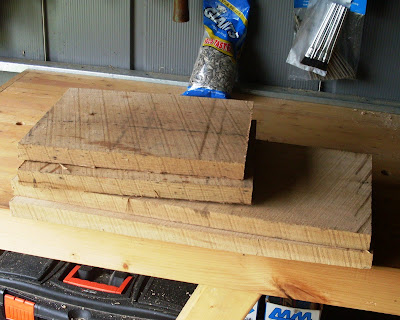 The other thing about finding the rough cut boards was the ability to work the material to period thickness. I don't claim to be an expert but there are a few books out there that break down some medieval work in measured drawings. 3/4 inch thickness appears nowhere. . . roughly 1 inch is probably the most common and I was able to stay true to that though it probably added some significant weight to the end result overall.

I am very proud of this piece and it is evidence of a significant amount of growth for me as a woodworker. I know that most of the time I blog about a piece as I'm working on it and show the finished results at the end, but this one has a unique situation, so here's some of the finished pics I have taken and I will be following up with the details of the build over the next few days 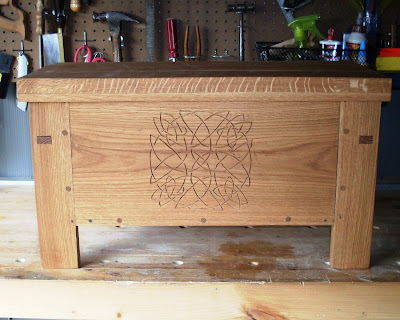 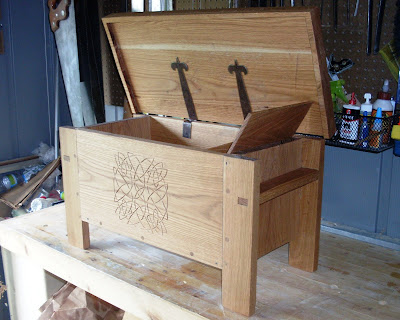 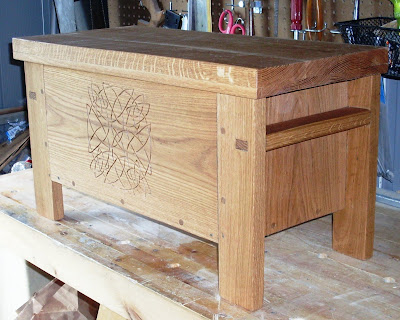 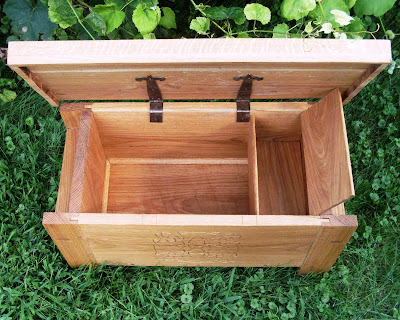