I've been writing about my build of an unconventional bible box. I was using it as a chance to practice the carving techniques I recently learned from Peter Follansbee's great video "17th Century New England Carving" The box is unconventional in the fact that I used dovetail joinery in the corners instead of nailed rabbets. Another unconventional decision was to carve the lid.

I admit, in my limited experience I have not seen a carved lid on a "bible" box. I guess it may exist out there, but I don't think I have seen Mr. Follansbee carve a lid on his blog either, but what I wanted to accomplish was practice carving a panel similar to the panels you may see between the stiles of a joined chest. 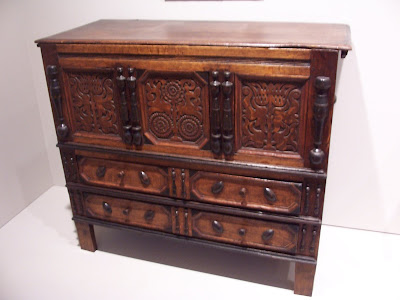 I figured as long as I'm going to build a box... I might as well incorporate the panel into the box as a lid. I love the panels on this joined chest I took pictures of at the Chazen Art Museum in Madison, but they didn't seem to fit with the fleur de lis pattern I chose for the boxes sides. I did a little searching through Mr. Follansbee's reproduction work and came up with this example to work from.
The arches and the flowers in this panel seemed like they would pair pretty well with the side panels I had carved. 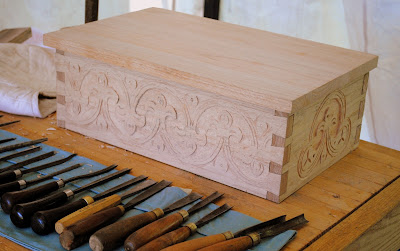 I started by dividing the piece spacially and scribing the arch. The arch is also where I started to carve. As you look at the next series of pictures I should explain that the panel wasn't carved in one sitting so there is some variety in the look of them. 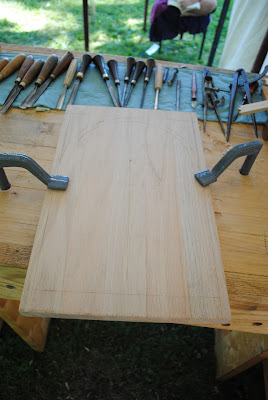 From there I scratched in and carved out the the four lower circles with a V tool. 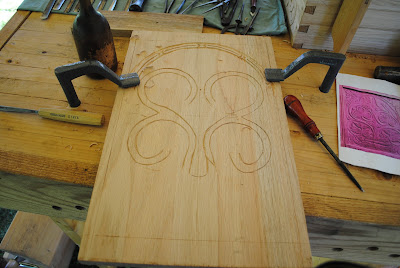 Then it was time to start filling in the flowers within the four circles. 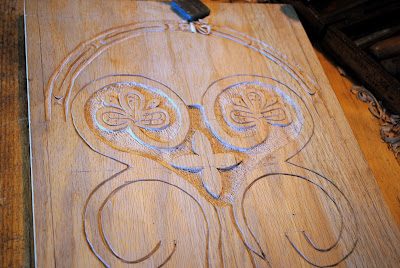 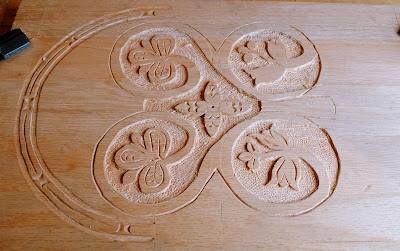 Here I began to go off the map. I love the artistry in the reproduction I took as inspiration, but as I worked at carving the piece I had a little additional inspiration. The vines and flowers I had carved seemed to need roots, and leaves and so I started to stray from the path.

Some may believe it was the wrong changing it up would be the wrong decision, but you have to understand why I wanted to begin learning these techniques to start with. I am not as interested in creating copies of templates as I am in using carving to add my own flairs to basic woodworking items like boxes. the techniques and the execution of them is higher on my priority list than completing an accurate reproduction.

There is a time and place for reproductions, and when I am trying to accomplish that I will work very hard to remain accurate and true to the original. In this instance, like I said, I took inspiration for what it was and let the piece talk to me. 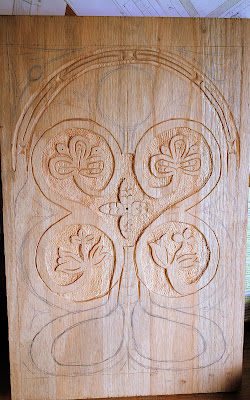 I took a pencil and sketched out where I wanted to go. I took the photo home to ask the only person who's opinion really matters to me. My wife's. She offered a few ideas that I liked and I took those back to the shop with me.

With those things in mind I worked the panel to a finish. 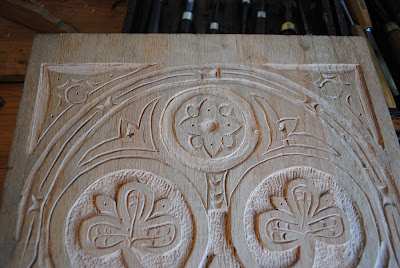 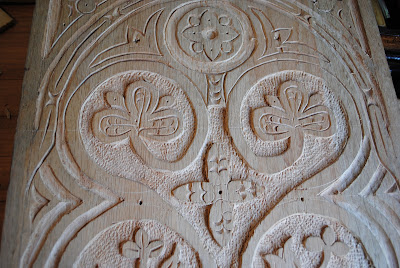 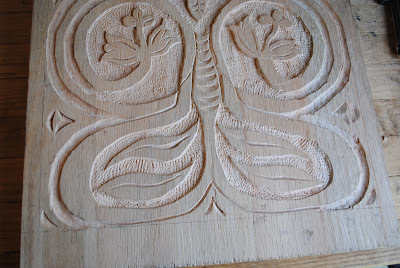 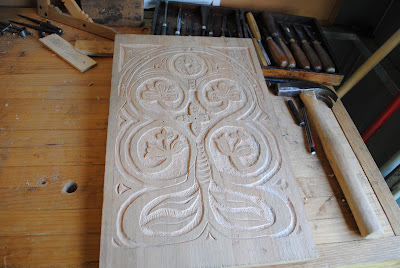 The next trick is to take these pieces and turn them into a respectable box.