Working On the 17th Century and Earlier.

Earlier this summer I picked up a copy of Peter Follansbee's video "17th Century New England Carving" and I started on a bit of a journey that has taken most of the summer to complete. After practicing a few basic techniques I decided to jump into the deep end of the pool and build a carved box sometimes called a bible box. I did make some, non traditional decisions with the box. 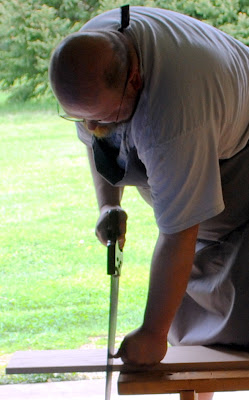 At the time I had just gotten a new dovetail saw from Bad Axe Tool Works and I hadn't given it a run through in any hardwoods yet, and I was using red oak for the box, thus the box became dovetailed instead of nailed rabbets. It started out as a practice piece anyway so what the heck right. 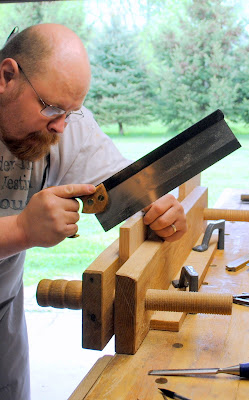 I sized the pieces, precut the dovetail joinery, and got to work carving . . .well, ok not really "got to work" in the truest sense of the phrase. As many of you are aware, one of my other passions in life is historical reenactment, I am a member of a group that does Viking Age and Medieval Reenactment, we are a not for profit organization that does educational shows for fairs and schools and similar things. (You can see some pictures of me in action HERE) For a long time I searched for a way to combine my loves and do something that was a demonstration of a woodworking skill in a medieval style. This style of carving was very similar and used a lot of techniques that would translate well into a demo. Finally I had a way to go about it.
Initially the box initially progressed slowly, carving a panel at a time at different events. I started with the sides of the box, choosing to carve the front facing section first. I borrowed heavily from Peter Follansbee's work to get started but in my mind that only made sense because I had used his video to pick up the techniques I needed to refine. 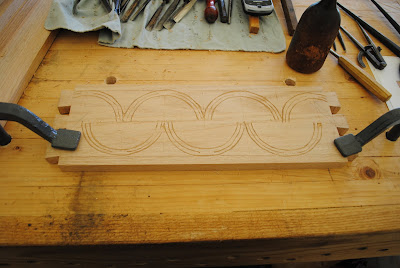 I find it difficult to take pictures of the process while I'm carving, with joinery and other woodworking operations there are some clearly defined steps and that makes remembering to pick up the camera easy, but carving is almost one long process, and once I get started working I get drawn in. At that point pictures become a secondary thought, but I am trying to get better about that. Above is the start of the front panel with its opposing series of arches

I did blog about the demo and the other things that went on that weekend HERE. 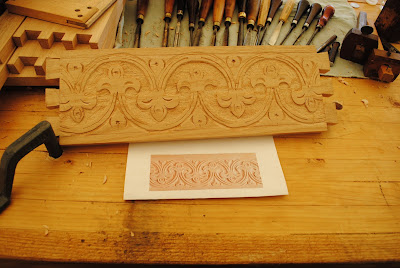 Mix in a couple of days of visiting with the public as they came through our demo and you get this finished panel, below is the print out of a picture of Peter's work that I used as reference. This was my first time really carving anything like this and I am still pretty proud of the way it turned out. 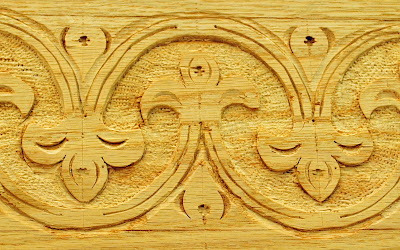 A close up of the carving.

After that weekend the pieces went back to the shop, until the next event a month and a half later. Now I was ready to tackle the sides but I had some decisions to make. I could carve them exactly like the front with the arches reaching all the way to the edges, or I could change up and do a more encapsulated design. I really liked the idea of the stand alone medallion on the side and besides, this piece was for practice so mixing it up would be good. 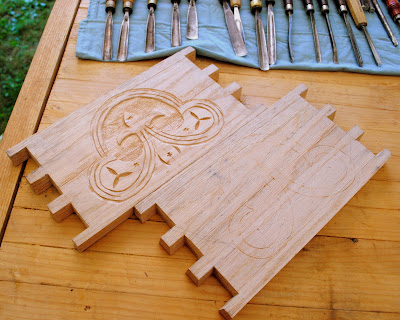 I started it out with a vague idea of one arch and one fleur de lis, so I used dividers to scratch in the top arch and the two half arches that reach up into the flower. Then I just stood and stared at the piece for a while, trying to visualize where to go next.

I started by conecting the arches together. From there I filled in the space inside. If you click on the pic to look at it bigger you can see the divider scratches in the yet undone side. I laid out both of these at the same time so I didn't have to try and recreate the settings on the dividers over from scratch. 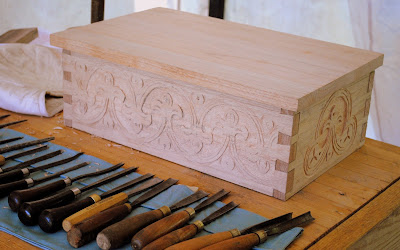 With the front and sides carved I couldn't help but bang the dovetails together in a dry fit and place the stock meant for the lid on top to visualize things a little. Then I moved on to carving a larger motif on the lid, but we'll talk about that more next time.