I was working my way towards gluing up the dovetail joints on my unconventional bible box and I was facing a delima. Did I want to add a till to the piece or not? The answer was yes and no.

Broadly defined a till is a smaller storage space inside of a chest. Traditionally bible boxes had a static till fit into dadoes with a lid similar to the one I placed inside this Hutch Chest I built a while ago. I have done several of these styles of till and they are both challenging and satisfying, but this time I had something else in mind. 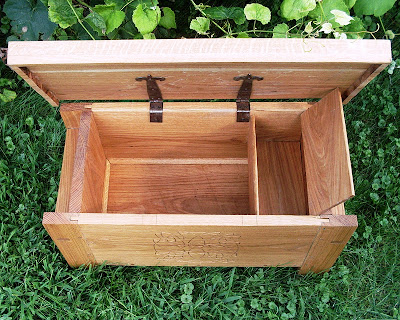 The other type of device that comes to mind when I hear the word till is the sliding variety, like those found in traditional tool chests
This was the type of till I wanted to install. I've been ramping up to build a traditional tool chest myself, more on that in the future, but what I was getting now was a little dry run at fitting one, albeit on a smaller and less finicky scale.

The first thing to do was install some runners for the till to slide back and forth on. I had used black walnut as a accent wood on the outside of the box so I decided to repeat it's presence inside. On the bandsaw I cut a couple thin runners a 1/4 inch thick and planed them up smooth at the bench. 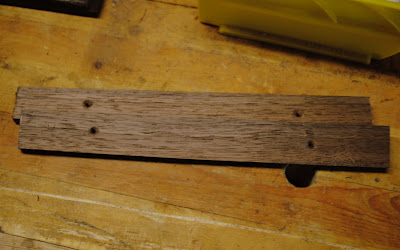 Then I predrilled and countersunk some screw holes and installed them with a little glue and a couple of screws each. 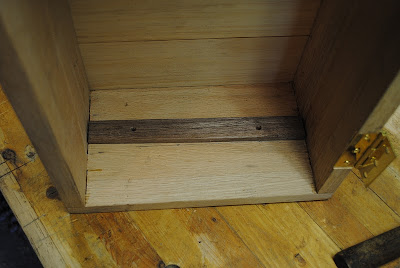 The more I thought about the small sliding till I was working on here the more I decided to do the opposite of the wood scheme I had used on the outside of the box. I decided to use walnut for the majority of the box and then accent it with the red oak. 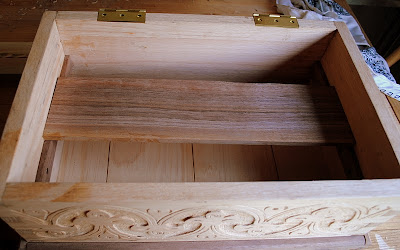 The important thing about fitting a till is the tolerances. You might almost fool yourself into thinking a slightly lose fit would be the way to go. That would mean no sticking, right. But the truth is that a snug fit is a better idea because then the till will ride straight on the rails and not shift crooked and impinge itself. A snug fit makes the till easier to move one handed. I sized the bottom of the till first, with that done I could build up from there. 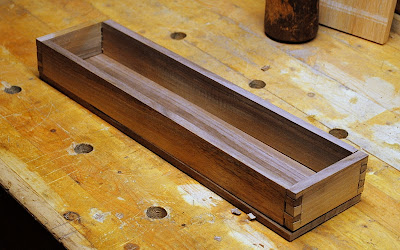 Resaw some more walnut to about 3/8ths thick, mark and cut some dovetails and you have yourself a box. 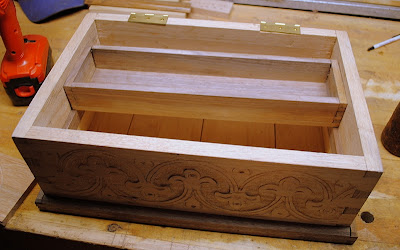 A little planing to get a perfect fit and it was ready for me to make the lid. 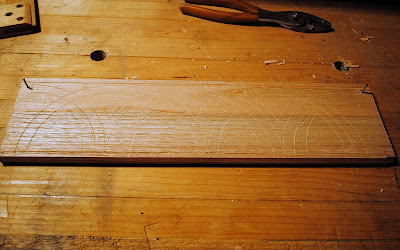 I took my red oak stock I had left and resawed a thinner section, again around 3.8ths thick. I didn't want the lid to be a let down after all the carving on the outside of the box. I chose to just go for a simple arch pattern. I nailed it to the bench and scribed the arch lines with a pair of dividers. 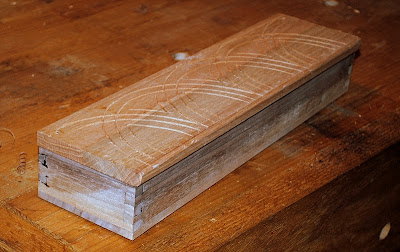 This is a very quick and simple pattern and it took less than 20 minutes with the "V" tool to finish it off. I eased the lip to a slight bullnose with a block plane. 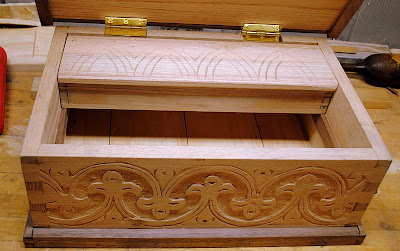 Then it was the moment of truth as I dropped the till into place. I was really happy with the way it turned out, in the end I think it was a decent decision. It allows the owner to keep some small items or even remove the till and use it seperately if they desire.

After this I put a couple coats of my Maloof finish (1 part BLO, 1 part Wipe on Poly, and 1 part Tung Oil) The oils deepened the walnut and darkened the oak and mellowed out the difference in contrast. I will have some good pictures of the finished piece up here soon so until next time.