I'm trying to do a little clean up and tying off of loose ends here on the blog. One thing I know I have been remiss to do is post some of the final vanity pictures of the carved box I've taking to calling the Unconventional Bible Box, (unconventional due to dovetailed corners and brass hardware)

It was started as a practice box for learning some of the carving techniques I picked up from Peter Follansbee's great video "17th Century Carving Techniques" and eventually it turned itself into a real project that has found a real home. 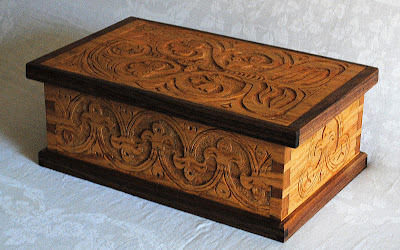 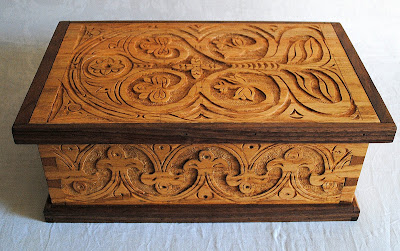 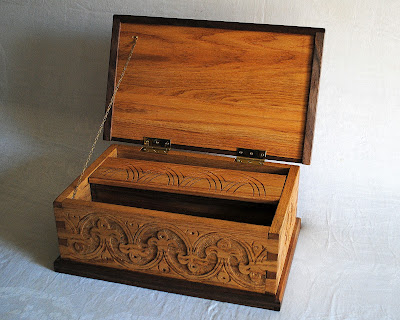 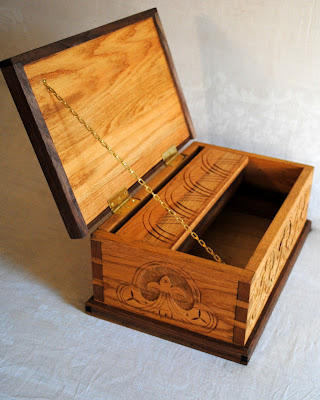 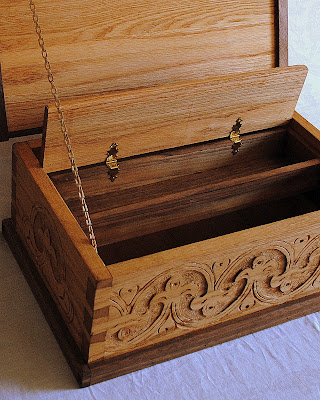 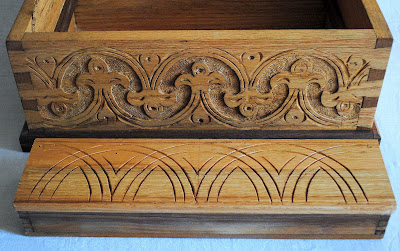 If I pick it apart there are things I'll try and improve on next time. I do believe from a purely aesthetic perspective that the lid dimensions can make the box look top heavy from the right perspectives. Of course I can see every missed strike of the carving chisel when I look at it but I understand the reality is that most others could not unless they went in looking for specifically for evidence of mishaps. The sliding till's dovetails were a bit sloppy and the dovetails and the brass now looks very out of place, but again, I was kind of shooting for non-traditional at the moment and that gives me ground to defend those decisions too.

My biggest dislike is the oak stock I chose. It's an edge glued up red oak box store board and if you look it's very evident. Again I bought the board as a practice go, I never expected it to turn out as well as it did, and that makes some of these detail mistakes more evident to my eyes. 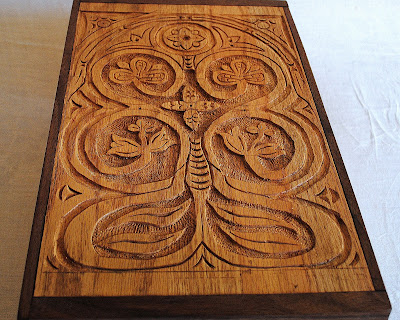 The things I like about my work is that the dovetails on the case are nearly perfect in execution. I like tho contrast of the walnut and the red oak, before the danish oil finish was applied they looked too contrasting, but the finish helped even the playing field, and as time goes on and the oak darkens with age, I think the contrast will mellow to simple accent.

I like that I pulled it off! I like the flow of the carvings, the modifications to the patterns I made including the medallion riff on the sides and where I took the pattern on the lid. I can see now where I might have increased the detail, but there are times when less is more. 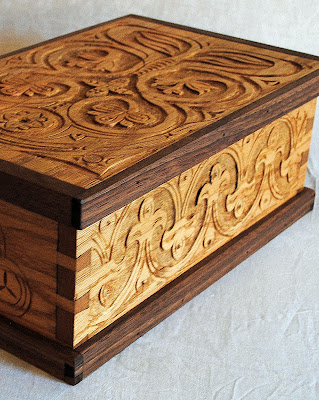 All in all I have to say this is not a bad foundation to build upon, it grew my carving skill immensely and I even used it to practice some lessons that helped later when I built my version of a traditional tool chest.

If you're interested in seeing more about this box and the work that went into it all the related posts have been collected together HERE, (That includes this post)