Over the last couple weeks I have been carving, not the 17th century style carvings I have grown so fond of, but a couple of signs commissioned by folks I work with at the hospital. Carving lettering is a bit more demanding than a pattern because mistakes stand out. The layout is a bit more picky as well, unlike laying out a pattern to carve I had to go dig out the old carbon paper and use the computer to get the letters printed to just the right size. 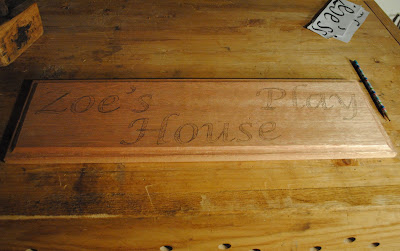 Zoe is 4 years old and her father just built a new playhouse for her. I work with Grandma and she knew I was a woodworker. She asked me if I knew anyone who made signs, assuming a router and a pantograph. I had to admit I don't know anyone who does that, but I would be happy to carve a sign for her. After all I have a mahogany board that's just begging to be worked over. 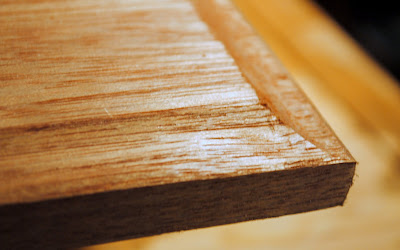 I ran a molding plane around the edges to get started. Then laid out the lettering using carbon paper. 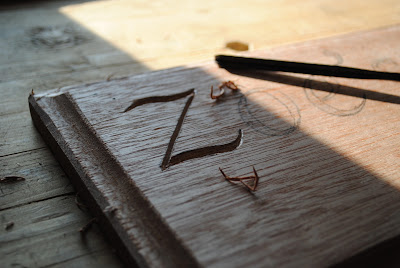 Now it was time to dig in and start work. On this sign most of the letter work was done with the V tool. 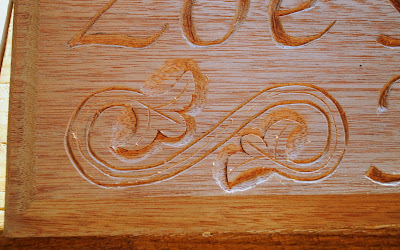 Wanting to dress it up a bit for a little girls playhouse I added a couple flowery S curves. 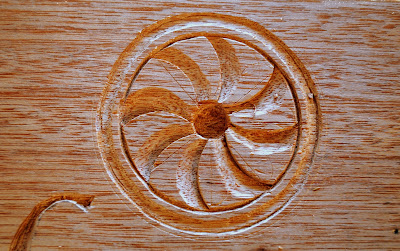 And a pin wheel. I had to sneak some 17th century stuff n where I could,. 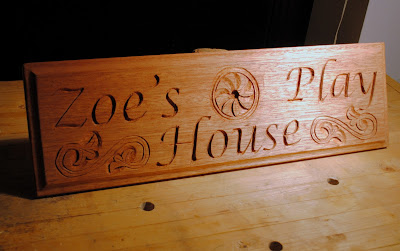 I was really happy with the way it turned out and more importantly Grandma loved it as well. I gave it a simple danish oil finish but when Grandma got it home she added some very dark stain to the lettering and some paint to the pinwheel and flowers. She showed me a pic on her cell phone and she did a very nice job. It was fun to have her finalize and customize it for herself.

After finishing Zoe's sign, another lady at work heard about my work and came to me. Her husband and her had just finished building a bar area in their basement and her husband wanted to name the bar with a sign. I had some nice cherry around and I hadn't carved any of it yet, this seemed like a good chance to give it a shot. 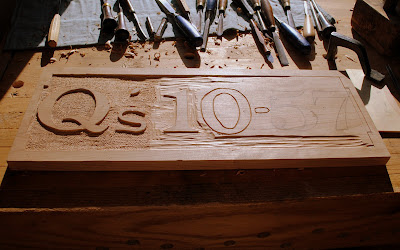 Her husband is a police officer, apparently the code 10-57 stands for someone who has been drinking. If I look it up on Google it means missing person, I'm not sure what the common usage is in this area but both definitions work if you ask me. 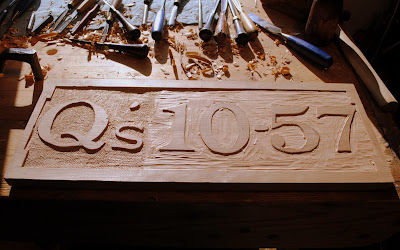 I wasn't given any real specific instructions about what it should look like, just the phrase really. As I thought about it a while and I have always liked the the Woodcraft sign that is being carved at the beginning of PBS woodworking shows like "The Woodwright's Shop" so I decided to do something similar. I outlined the letters with a V chisel and then worked up to the line with gouges, also using broad flat gouges to remove most of the background. 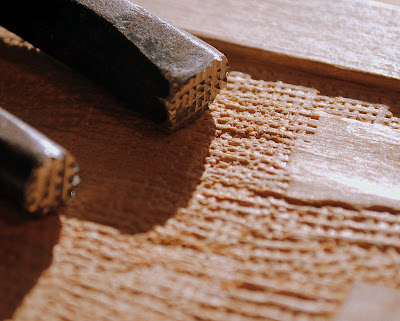 To smooth out the background and help make the letter stand forward from it, I textured it with my waffle punches. 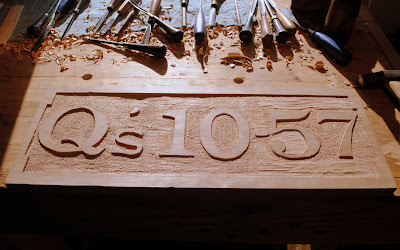 Smaller punches make a deeper impact but don't cover a whole lot of surface at once. It was a while of pounding the punches to cover the negative space.

Fruit wood like cherry can be a little temperamental, especially when its kiln dried. There were no checks or cracks when I initailly sized and surfaced this stock but through the process of carving a crack developed, like a seismic fault line, stretching across the length of the board. It was incomplete but I din't want it to proliferate over time and give Officer Quimbly two half signs instead of one full one.

My solution was to take a large, thick sheet of high quality, linen art paper and glue it to the back of the sign. When I say glued to the back I mean completely, edge to edge coverage. I figure the paper will buttress the thin crack and help hold the sign together as well as stretch and move with the wood over time. Hopefully a very elegant solution. 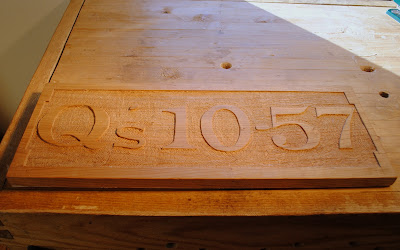 A danish oil finish, some hard ware hooks added to help hang it and this one was finished as well. Carving this pair of signs was a good learning experience and kind of fun as well. I don't think I'd like to make a career out of it but as an occasional diversion it's alright.