For me it all started with a simple idea. I wanted to learn to carve, by hand, with chisels and a mallet, instead of what I had done up to that point in time which was technically tracing pencil lines with a rotary tool.

I looked at several books and none of them made sense, or really even covered in depth the carving I wanted to do. Not that I could have clearly explained what I wanted, but I knew I had no interest in rendering three dimensional fish from bass wood (a common theme I saw in several books). I wanted to adorn the case pieces I was building and neither fish nor basswood figured into that in my mind.
Then I floundered onto Peter Follansbee's blog "Joiner's Notes" (Another fish reference!) and found something I had been looking for. Geometric patterns that could be simple and complex all at the same time, historical reference for the carvings he was doing, domestic hardwoods like oak and walnut, and case pieces from boxes to chests. I was able to finally point at something and say, "There...that is what I want to learn to do."
Then Peter came out with a DVD packed with carving instructions and I was shown the path I had been searching for. But there was so much more down the path that I wasn't expecting. I think Peter is a clever man and along the way to learning to carve in a 17th century style, I also found my self becoming enamored with the furniture it adorned.
Earlier this week I took my eldest daughter, who is home schooled, on a field trip of her own design. We got up very early in the morning and drove across the state to visit some museums in Milwaukee. I'll admit I influenced this decision some, I knew the Milwaukee Arts Museum held a sizable collection of furniture from the Chipstone Collection that I had always wanted to see.
I was blown away seeing several of these pieces in person. These pieces carry a power and permanence that sets them apart. I have grown up looking and and being around good and bad versions of furniture, from Shaker to Craftsman, from Queens Anne to Art Deco, from Modern to Federal, and most everything in between. And to my modern eyes, these "old" pieces looked fresh and new. You just don't see pieces like this around. I have to admit that I have become completely smitten with the style and I am becoming interested in exploring it more completely on my own.
The real revelation for me was not completely held in seeing chests from this period. 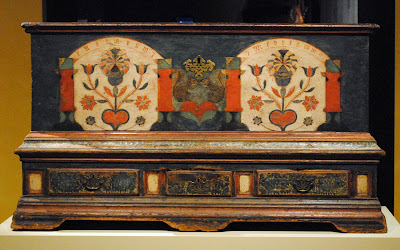 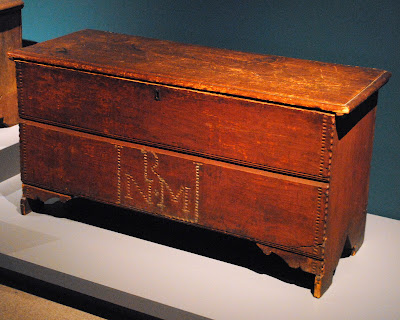 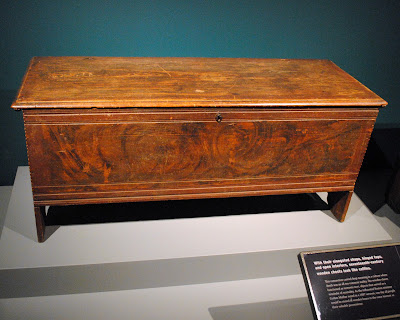 Nor in seeing the joined chests. . . 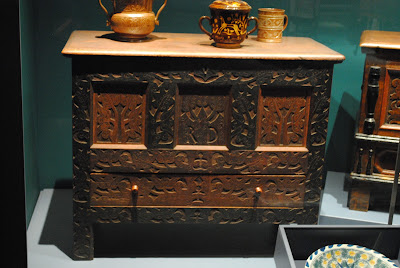 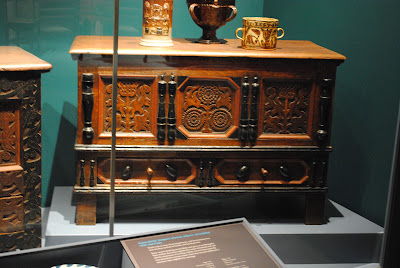 Nor was it in seeing wainscott chairs. 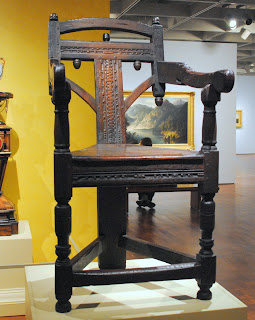 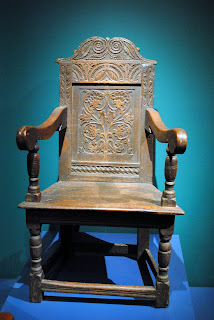 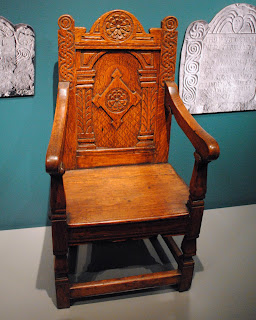 I had seen these types of pieces in photos before.
The piece that grabbed me was this simple little table, with a gate-leg and folding open tabletop. 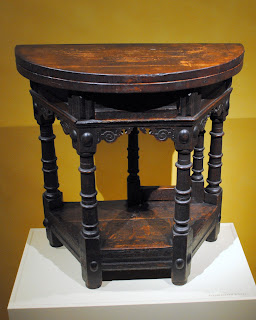 I didn't know that anything like this was around from that period, and for me it awoke in my mind the idea that this style of Joyned Furniture could be more than historical pieces, it could be furniture you could fill a house with. At around 28" in height it would make a great end table or bed side table.
Then later, in a different section of the Museum I saw this table in a painting of a tavern scene from the same time period, and now an idea started to germinate in my mind. 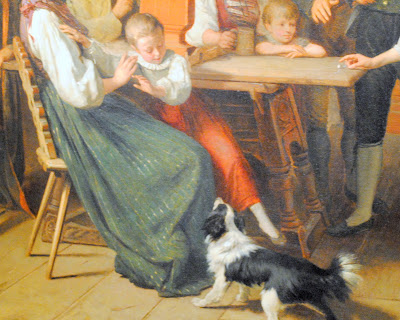 For a while I have wanted to take the next step from bible boxes and try my hand at an actual joined chest. I think I may just take it another step further after that. Why not a couple Wainscott Chairs after some joined stools? Why not that small folding table? Why not a full sized tavern table? Why not explore the form as much as possible?
What a rabbit hole of inspiration Mr. Follansbee has help open for me. I only hope I get the chance to thank him in person someday.
Ratioine et Passionis
Oldwolf
You should check out Peter Follansbee's Blog Joiner's Notes
You should also take a look at the Chipstone Collection's Page
You should also take a look at Peter's New Book from Lost Art Press written with Jennie Alexander and called "Make a Joint Stool From a Tree: An Introduction to 17th Century Joinery" and pre-purchase it (like I did) so you can get free shipping.
Email Post
Labels: Carving Experiences Joyned Furniture Thoughts and Observations