I'm not sure what it is about the beginning of the year, but I find it to be a very hard time to write about what I'm doing in the shop. In the past I thought it had to do with fighting the cold Wisconsin winters to get shop time, but this year I moved the shop to my apartment for the winter and I have been as busy as ever. So what I figured I needed was a kick start, a simple post to get me back up and running and tonight I finished off a quick project I thought would work well.

t started with my arming stand. Wait, what's an arming stand you ask? As many of you may know, (it comes up from time to time here) I spend a decent amount of time participating with a medieval reenactment troupe, this includes studying and practicing medieval combat techniques. This means I am the adult incarnation of nearly every twelve year old boy's dreams, I have my own armor, not a costume for Halloween, but real, steel, try and cut me and you can't, armor. And an arming stand is the place where I store and display my armor. 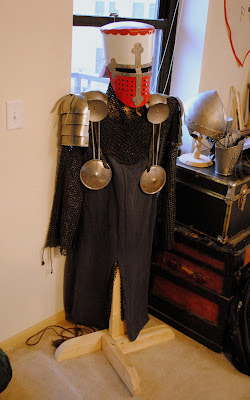 It's a simply constructed cross, quickly made from a 2x4 in an hour or so. I've made and given away several of them through the years, and I've named all of them. This one's nom de plume is Fritz. (As is "Fritz, Fritz, they killed Fritz, Those damn stinking yellow fairies they killed Fritz") Well Fritz's base had worked itself loose and I needed to repair it for the upcoming season and as long as I had it on the bench I decided to add some embellishment to the simple pine. 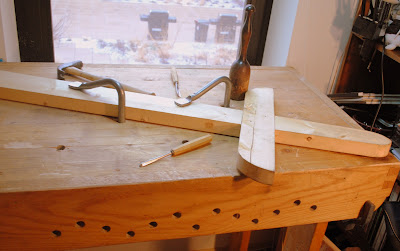 I decided I would use just two chisels, a "V" chisel and a gouge. Infact these were the first two chisels I purchaced and I was interested to see where I would go with them. I was kind of testing myself, I've added several more chisels since starting with these two and I wanted to check that I had gotten better, not just appeared so because of a better / more expansive selection of sweeps. 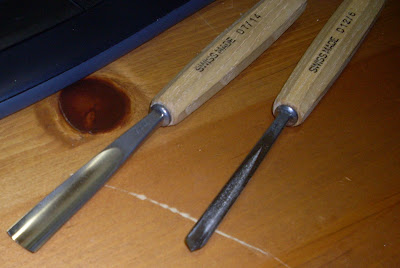 I am a compulsive planner, this works in my favor a lot, but it can be confining as well. There has to be room for the spontaneous in art. So in contrast to my recent work, I just took the chisels and started to make marks, figuring it out as I went. Very liberating. 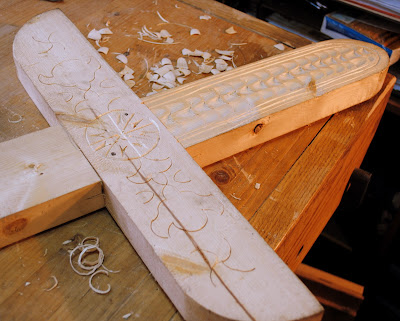 In about an hour I had finished up and started nailing the legs of the stand back together (with a little wood glue this time for longevity) No more just ugly 2x4 when I take the maile down to strap it on. Now there will be a little eye candy for me to come back to. Yes it will be hidden most of the time, but I'll know it's there. 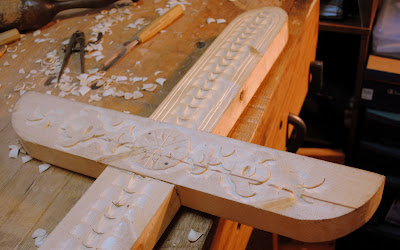 I like the offset thumbnail cuts that run along the vertical axis. and I'm pleased with the pattern along the horizontal. It's easy for me to get worked up over perfect symetry and getting my work to line up exactly alike, one side to another and an exercise like this is good because it reminds me that a carving is viewed by the eyes as a whole, not as it's individual cuts and sweeps. You can get to close to some of these things, it's good to step back and let go from time to time. 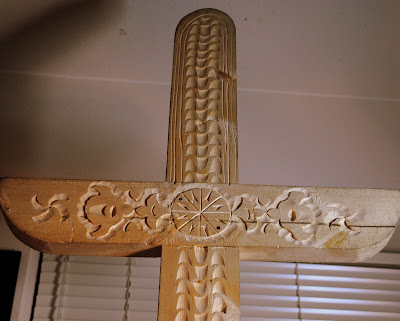 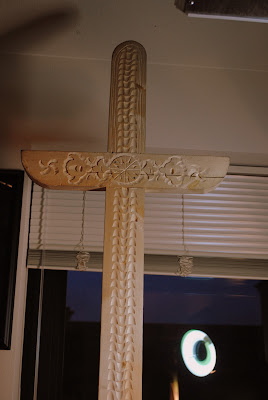 Well let's home that this gets me going and I'll be back to regular programing again. Until then . . .