Hardware How I Want It.

I'm not always the quickest on the uptake sometimes. I've learned more by making mistakes than I ever did from books or blogs. When I started making sawdust, and for many years, I thought the big secret to woodworking was the joinery. How you put the piece together. It took me a while to learn that is just one slice of the deep dish pizza.

I would pace my time building a piece. Draw out measured drawings and try to faithfully execute them by saw and chisel. When the build was over I turned into a fool who felt like whatever finish and hardware I could slap on as quickly as possible would only help me get to building the next thing. Then I started to look at my work with a more critical eye and tried to discern why my pieces seemed to fall short of my expectations. The process yielded several things I have tried to spend several years fixing. From stock selection to my finishing choices I tried to educate myself and better my processes. I think, for the most part, I've gotten better.

The continual struggle is hardware. In fact I think I would drive a long ways to attend a class taught on hardware alone. I think the important thing I've figured out is that you don't have to accept your hardware as it is when you buy it. It is amazing what you can do with a hacksaw, a couple files, and a ball pein hammer.

I didn't have to do any major modifications to the hardware I used building a version of the School Box from "The Joiner and Cabinet Maker" but I did have to do some work dressing it up. I had several sets of uneven strap hinges from Lee Valley sitting in the shop and my plan was always to use a set of them on this build. As I opened the packages I found them covered in a brown, manufactured rust that I just thought was unappealing. 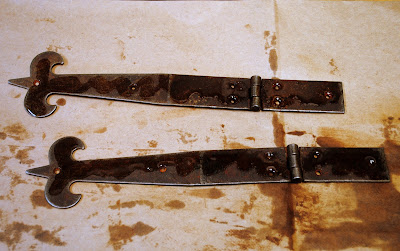 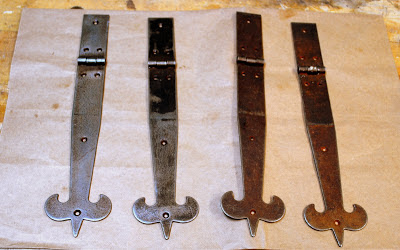 When you start this process you're never sure quite what you're going to uncover. The first two I cleaned didn't match up very well but fortunately I had bought four sets together, so I went ahead and cleaned them all up. I matched them into pairs and chose one set for this project. 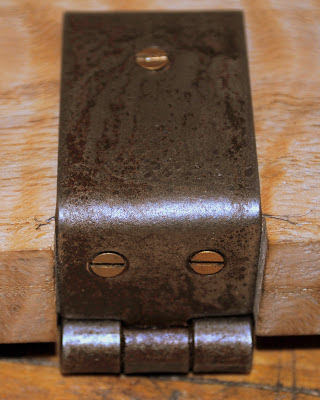 If there is one thing I wish I had never learned about, it would be timing screws. It was something I had never noticed before I learned what it was. Now I look for it everywhere. It feels like I've been infected with a horrible OCD virus for which there is no treatment.

If you don't know, here let me infect you as well, just like Chris Schwarz did to me. Timing is clocking all of your screws to line up the same. It takes a bit of time and care to accomplish, but I cannot stop myself. My oldest daughter asked me why I was worrying about it and I explained that, in my mind and eyes at least, if a craftsman has gone to the length of detail needed to time the screws on the hardware, then that is a sign that every other aspect of the piece has see the same quality attention to detail.

Take two flathead screws and a countersink bit and call me in the morning. 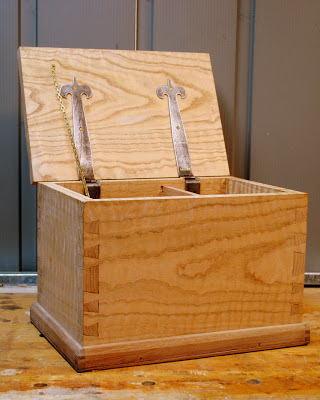 I always struggle with hardware installs. Maybe I don't know enough of the tricks yet but it always seems to take a good amount of trial and error to get things placed right. Perseverance is the key though and eventually I do win.

It is a bit frustrating though to put on all the hardware, then take it off for finishing, then put it back on again. Then again, maybe I'm doing it wrong. 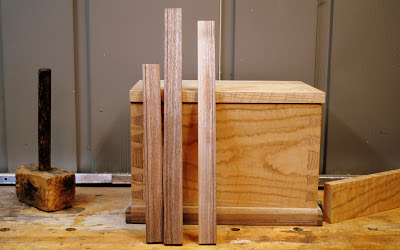 With the lid on all I had left to do was make a walnut wrap for it to match the skirt. 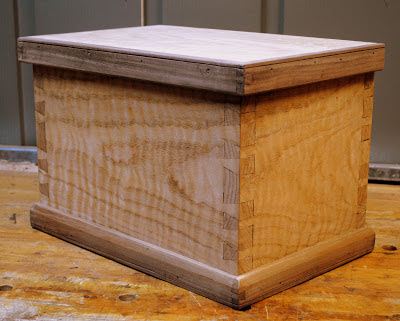 The lid wrap is easier to fit than the skirt because it only covers three sides. I chose to mirror the bead on the bottom of the skirt on the top of the wrap and just ease the edges of the bottom. Some glue and nails and I was there. 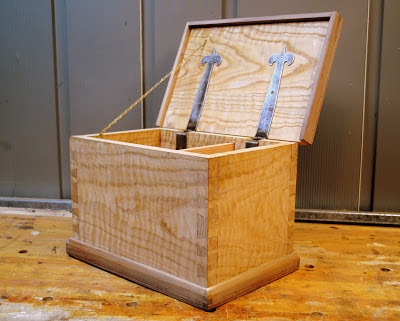 I installed a stay chain, (timing the screws that hold it in place of course) and the box was ready for finishing. I wanted to put handles on the sides and I had a set of chest handles sitting in my stash I though I would use but after getting to this point I decided I didn't like them as much so I held off until I make another online hardware order, then I'll install them.