Late this summer I commenced the yearly rearrangement of the shop. It drives me crazy that I do this but it is good for several reasons as I get to refine my work flow, incorporate new pieces of shop furniture, and clean out some things no longer in use. It's not very good for keeping pace on projects I'm working on. Everything gets disrupted by the chaos of moving and reorganizing, but I believe every change gets me closer to the most workable shop possible.

This time around I decided to tackle the most daunting issue in my shop. Hardware storage. The biggest problem is I just dislike all the options possible for keeping all my nails, screws, hinges, tacks, pins, angle irons, bolts, nuts, and washers accessible and organised. The hardest part is that everything marketed seems so . . .  gadgety.

As I pushed workbenches around I tried to think of what I had seen in my past.

My father kept big coffee cans full of a chaotic melange of fasteners of all varieties. I'm sure it started with the idea that one would be for nails and one for screws and so on, but somehow the process always broke down quickly and everything became mixed together. (Having two industriously mischievous sons continually raiding his shop did not help)

The real nightmare was my Father-In-Laws shop. When my wife first brought me around her family her dad kept a nice basement workshop. He's a bit of a collector so there was lots of things stuffed into all the nooks and crannies  but he spent some time down there and enjoyed it. Then his health started to change and the shop was left sitting for many years, and once in a while I would use his shop and tools for one project or another. Sometimes I even had his permission.

He liked the obligatory small plastic cabinets that house a dozen or more little plastic drawers, he had a half a dozen of the large variety. When I "borrowed" his shop and needed to find something all those little bitty, piece of crap, tiny drawers were nothing but a pain-us in the anus, They were haphazardly organized to his secret system and I had to open every single one to find the right size drywall screw, To top it off their open top and back design (to let the light in so you can see better Precious) only allowed  the drawers to collect and organize dust and other unmentionable things.

The house had four cats, who each spent an inordinate amount of time in the basement, I am going to say that and leave it to your imagination. (shudder) God I hated those little drawers.

Of course you have to figure out your own way to do things. The best method I've used in the past was in a basement workshop I attached a few rows of spaghetti sauce jars to the floor joists above my head. Just like my Grandpa used to do with baby food jars. They sealed out the dust, were visible through the glass, and, most importantly, they were up and out of the way until I needed them. When I moved away from that shop I started using small Akro bins to hold things. They still collect the shop dust along with the hardware, but they are larger and more convenient than tiny drawers filled with . . .   (shudder)

Finding the right place to put these bins became my continuous conundrum. 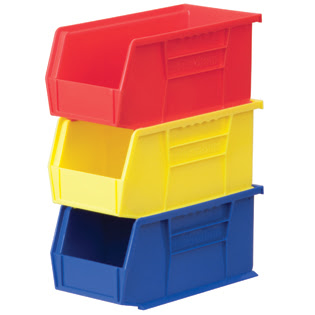 Now I find myself rearranging and re-figuring what I'm going to do. I dropped a quick call for help on Twitter and got several good suggestions. (Thanks guys, you know who you are.) Then I went and spent a hour or so at one of the area home stores staring at all the options in the tool box/shop storage aisle. In the end I came to a compromise between what I had been doing and a new gadget.

Since I started working from a traditional tool chest the tool storage in my shop has changed. I took down a bunch of peg board, and the Plane Storage Shelf I built to accompany my Saw Till wasn't being used like it was before. The shelf used to be clean and organized because I kept tools on it I used all the time. Now those tools live more protected inside the chest and the shelf has become a crap collector with all manner of odds and ends crammed on the shelves.

I cleaned off the shelves, reorganized the collected crap, threw a bunch of stuff away, and opened up three shelves. I re-organized my Akro bins and lined them up on those three shelves. In the end I am pretty happy with the way this worked out. Things are close to my bench/work area, and very visible so I can see what I'm looking for and what supplies I'm getting low on. 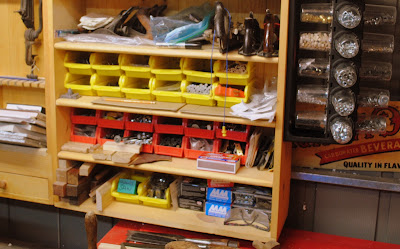 The new gadget is a bit of a throwback, it's called a "Rotavision" It has four rows of allegedly unbreakable plastic containers connected to a spinning hub. A rotating version of Grandpa's baby food jar idea. I filled it with my lesser used bolts, washers, and screws and it should work great. 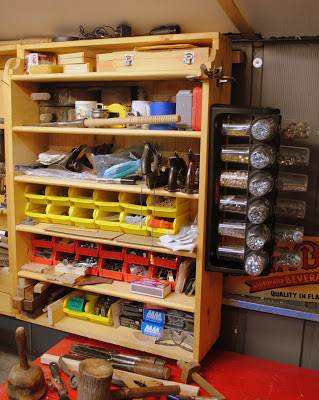 But getting the hardware situation squared away allowed me to finish reorganizing the shop. With the shop running and the ceiling insulated with some 2" styrofoam, I'll be set to get moving on some projects again. Hopefully I can crank out a couple this winter and get myself back on track.

I decided since it had been forever since my last shop tour I would shoot a new, updated one. Here's a look.


And if you want to make comparisons to the shop from a while ago then follow this link to the OLD SHOP TOUR.

In the end I have resolved myself to the idea that there are no Good solutions to storing hardware. There is only the solution you are using right now. Hopefully this solution will hold me for awhile.