A quick note about the next few weeks for the Oldwolf Workshop.

First, I stole another idea from Chris Schwarz. He changed his blog to have a list of things in the sidebar and I thought the idea was too good to pass up. The thing that got me is the "What am I reading?" section. I am a huge sucker for the written word and ever since high school I have been known to read up to a half a dozen books at a time. I always wanted to come up with a way to share what I'm reading or watching without feeling like I have to write a review about it.

I'm just not that comfortable writing reviews because they get viewed as recommendations, and I don't feel it's fair to recommend something without trying the other possibilities on a level playing field. So I think I could be justified in recommending and reviewing some things, ketchup or potato chips maybe. The side bar is my easy out. Thanks Chris for the idea, I hope you're not upset I borrowed it.

A long time ago I watched an interview with SciFi writer Robert A. Heinlein where he said, "Whatever's not nailed down is mine. Whatever I can pry up is not nailed down." To a degree, I've always liked that logic, That's probably the viking in me talking.

Second. I am feverishly packing and planing for a return trip to Nicaragua. Last April I went down with a group of Doctors for a medical mission trip and when we arrived we found out the government wouldn't allow us to do more than take a tour of the hospital. We spent the time learning what we could to avoid the pitfalls in the future and now we are prepped to give it another go. With everything else going on at home it sat on my back burner until I realized, "Hey, the trip is a couple weeks away, I'd better get off my ass!"

So the last couple weeks have been a little more chaotic than usual, and I expect the next few to be as well. If you are emailing me or trying to buy a tool or whatever, please be patient with me as I take some time to help provide some care for a group of folks who need it the most.

Third, I'd like to introduce some new characters to the blog. I'm thinking about calling them The Sawdust Gang. 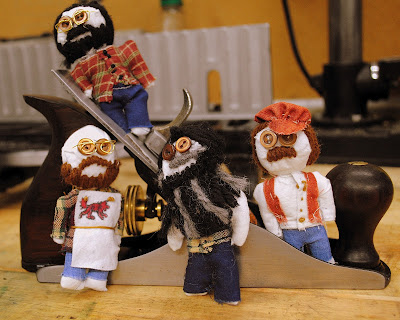 My sixteen year old daughter Chloe made them for me for Christmas. First she made the figure that looks like me, then she decided my poppet would be lonesome without friends. She colluded with my wife who suggested she make figures after the woodworkers whose names she's heard me speak about the most. Chris Schwarz, Peter Follansbee, and Roy Underhill. 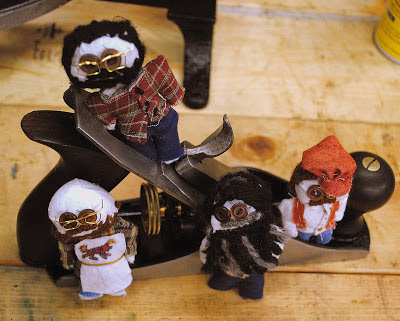 Together these guys should be able to get into a fair amount of trouble in the shop. We'll see where their adventures take them. I'm kind of thinking about doing a series with them Comic Book style, we'll see what ideas I can come up with. (I'm open to ideas in the comments area too!)

Truthfully it might be a decent way to introduce kids to the idea of hand tool woodworking as a "real" thing. Not just something the pioneers had to do. This comes from a real conversation I had with a high school kid last year at one of my carving demos. When he saw my carvings his first question was "You had a computer do this for you right?" 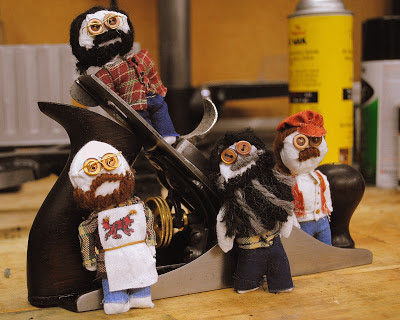 Maybe I'm aiming high for some linen, a few threads of string and some stuffing, but these guys will be fun for me at any rate. (I guess I can only hope their namesakes forgive me any poetic licence) Can anyone else hear the theme music for the "A-Team?"