The Ultimate Furniture of Necessity.

"but in the world, nothing can said to be certain except death and taxes." - Ben Franklin

With all the money spent every year on elliptical machines, fad diets, face lifts, and wrinkle cream, none of us can escape it. Unfortunately that includes man's best friend. My best friend Thom and his wife have an Australian Shepard named Valen. He's been around this world a long time. Since my oldest daughter was just learning to walk, and she just got her drivers licence.

This past fall his age really started to catch up with him. When Thom started to notice the inevitable was coming he called me up and asked me for a favor. He wanted to know if I would make a box for Valen. As we talked bout it, we kept calling it a box, for whatever reasons there are, saying coffin just doesn't seem right.

Of course I said yes.

A few weeks ago Thom called me again. Valen had a particularly difficult day and he was thinking it would be any day the box would be needed. I told him as soon as the shop was warm enough for glue-ups I would get started. Valen has rebounded from a rough couple days, but you can't escape reality. I had to get moving. 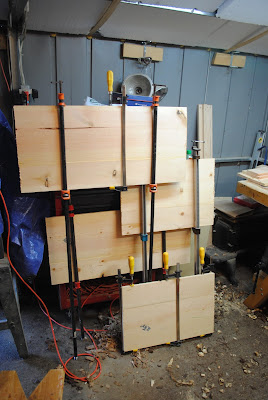 Usually when I'm building something I take a lot of pictures. Much more than what shows up here. I made a conscious decision to document less this time around and really see how efficiently I can get things done without my usual time sink. I did take some time to teach my oldest daughter how to do some sawing and she cut and chiseled one corner of the dovetails for me. I don't get to trick her out into the shop too often so it was a bit of a guilty pleasure. 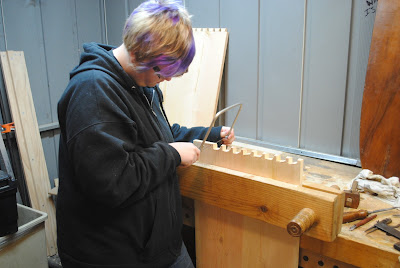 I'm not doing anything that's groundbreaking, or that I haven't documented a dozen times here already. In fact, as I was telling my wife the other night, it almost feels like I completely know what I'm doing this time around. I haven't had any mystery or problem solving. I started with some rough measurements given to me by Thom and I just started building. No sketches, no sketch-up, no printed plans, or even a reference picture. I knew what I needed to build and I'm just doing it. Trusting my eye and my abilities. That's scary enough by itself. 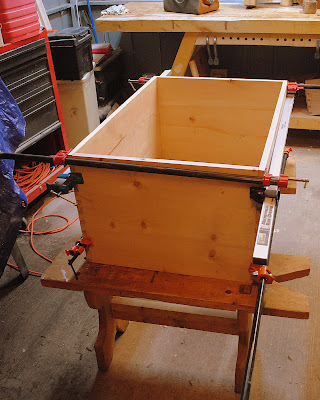 I'm not shooting for anything fancy. I will probably do some carving in the lid. but beyond that I'm just looking for simple, straightforward, strong and classic. In the end it's a smaller version of my tool chest, with a variation on the lid. People may ask why I've gone to the bother of dovetailing the corners and ship-lapping the bottom. If I'm in a hurry, then nailed joints should be enough right? 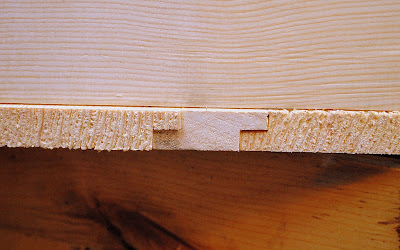 In the end I'm a victim of my own compunctions. I'm doing things the right way according to my definition of right. To do anything less would be shorting the project and shorting myself. Valen would never know the difference, and his master probably wouldn't either. In a short amount of time no one will know because the box will be buried under several feet of earth. I always fall back on a line "The things I make might be for others, how I make them is for me" from Tony Konavaloff's book "Chisel, Mallet, Plane, and Saw." 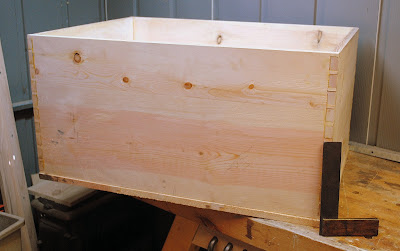 As I've been building I've been doing a lot of thinking about WWSD or "What Would Setles Do." Setles is my wife's grandfather who passed away several years ago, I inherited the start of my hand tool collection from him. I use his No 5 Stanley and hand saws on every project I work on and I think of him often. He was not a woodworker, he was just a man from a different age. One where you grew up on a farm and knew a little bit about doing almost anything. You could build a chicken coop and fix your car. You could even do a little blacksmithing if called upon. 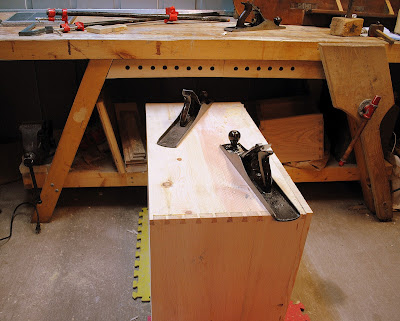 The things he made from wood have a workman's character to them. It's often obvious they're built from salvaged wood and there's small mistakes here and there. But he knew what he was up to and was able to bring things from scratch parts into the world. If he had to cut a dovetail he would hardly mark out a specific 1:6 ratio angle. He would grab a saw and cut it, what difference would a specific angle make. The idea was to get it done and get it done right. 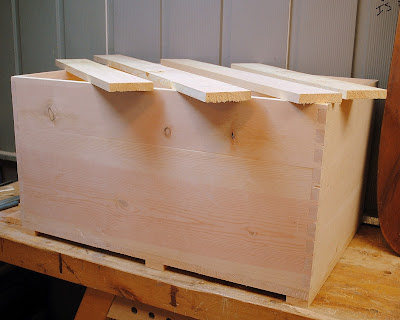 After a grand total of about ten hours in the shop I've completed the base of the chest. There's a little sanding to do on the skirt and it's done. The lid panel is already glued up as well. Tomorrow I can start planing that flat, cut it to size, and probably get the carving done. 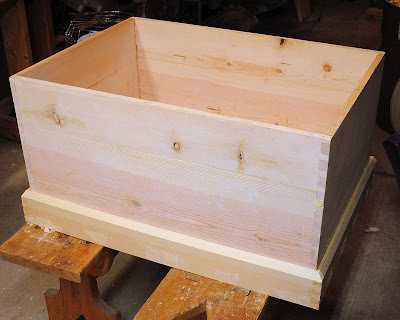 Only today I decided I should probably fit some handles on the ends to help with carrying it. I haven't decided if I will go an buy some steel ones or just fashion them from some 2x6 I have around. Setles could have done either and he probably wouldn't have agonized over the decision. I'm leaning towards making my own, the ground doesn't need more steel buried in it anyway.

I do wonder though, just how long the chest will last in the ground, and in a couple hundred years what someone will think if they happen to dig it up.