A Reverence For The Individuality Of The Past 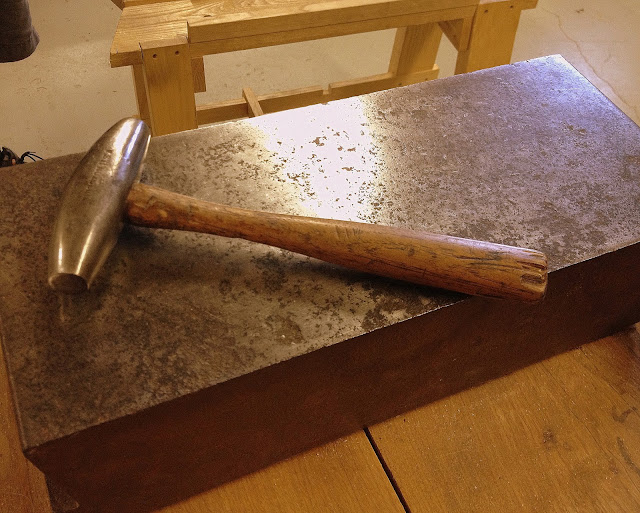 -Eric Sloane "A Reverence For Wood."

I had a hand saw I thought I might want to restore. I knew it was pretty beat up and there were other questions I had about the feasibility of the rescue. Lucky for me I had just the resource to go to.

I live a few short minutes from Mark Harrell at Bad Axe Toolworks, I called him up and stopped over with my rusty prize. He calmly and gently eased me down from my over enthusiasm, the saw really is beyond rescue.

While I was hanging out I got the chance to witness Mark practice a lost art. Hammer smithing a vintage saw plate to remove a bow and re-tension the plate. He was showing one of his apprentices / employees how it was done and it was fascinating. Using a vintage hammer and a live anvil he bounced a series of blows down the saw. One light blow for each tooth, placed slightly above the gullets.

"How did you figure out how to do this?"

"I read about it, then I gave it a try and ruined a couple saw plates until I figured it out."

"It doesn't always work," he continued, "it's not for the faint of heart. I managed to ruin one of my own vintage saws a short while ago. You have to really have a feel for how much is enough and how much is too much."

An echo of one of my favorite maxims, The enemy of good is better. 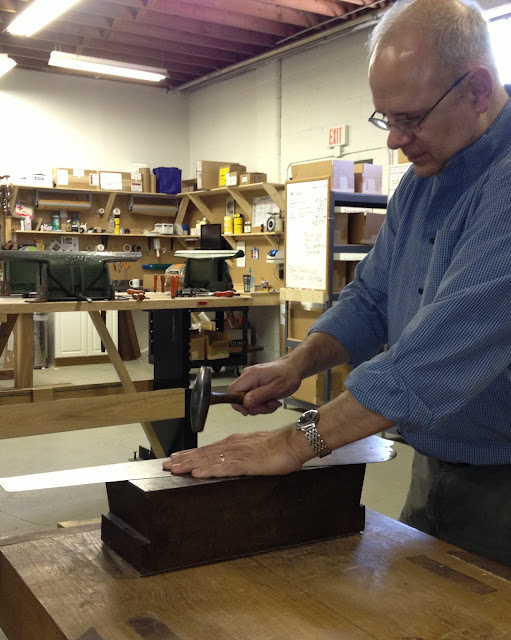 What I really appreciate about Mark is his reverence for the past and how that's encapsulated in the saws he produces. Appreciating the past is one thing, but taking lessons from it and turning those lessons relevant for today is something else entirely. Mark has taken the time to invest a lot of understanding into what made saws work well back when a man's livelihood could very well have depended on it. Those details elevate the quality of the saws he puts into peoples hands. Simple details that make big differences.

Mark just sent me a link to an article he wrote about fixing the tension on a vintage back saw. to remove warps, waves, and small kinks. Read THE ARTICLE and you'll understand what I'm getting at. Looking at the trend of things, an online class from Matt Cianci, an upcoming book from Andrew Lund, and I expect to see an onslaught of "build your own backsaw" endeavors in the near future. I applaud anyone who wants to take this on, but you have to know, doing things the right way is rarely easy.

Whether it's a friction fit on the back or a hammer set to the teeth, I know Mark is putting in the time and effort to get it right. 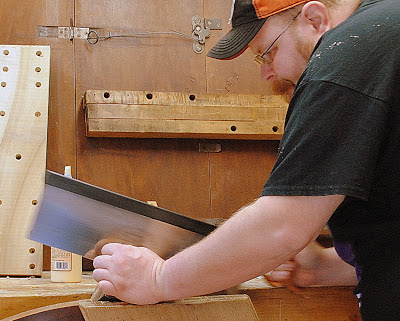 Just reading that article justifies to me the decision of buying my saws from Bad Axe. I have three of them in my saw nest now. A 12" dovetail / small tenon saw filed rip, a 12" carcass saw filed crosscut, and my new 16" tenon saw filed hybrid. All of these saws cut perfectly right out of the gate, and the utility and versatility of the 16" tenon saw is making me fall in love all over again.

I try to keep my tool selection a little on the spartan side. I could consider those three saws enough, but I would like to have one more finess saw for fine work and thin stock, so in the next year or so I'll be in the market for a small dovetail saw with a high ppi number (ppi = points per inch). Chances have it I'll be going back to Bad Axe for that saw too.

And then I'll be set on saws. . . until Mark decides to start making hand saws or panel saws.