To Build A Nest: Back Saws

I've been exploring the choices and decisions I've made regarding the saws I use nearly everyday in my shop. I have built a robust and versatile collection and I think it's possible someone out there looking to start into hand tool woodworking or looking for more information on starting at all may possibly benefit from seeing my decisions up close. (I also admit it's possible I may be adding further mud to the waters by even writing about it so specifically)

I've written about my three hand saws (you can read it HERE) now I intend to write about my backsaws or joinery saws. My favorite saws to use. 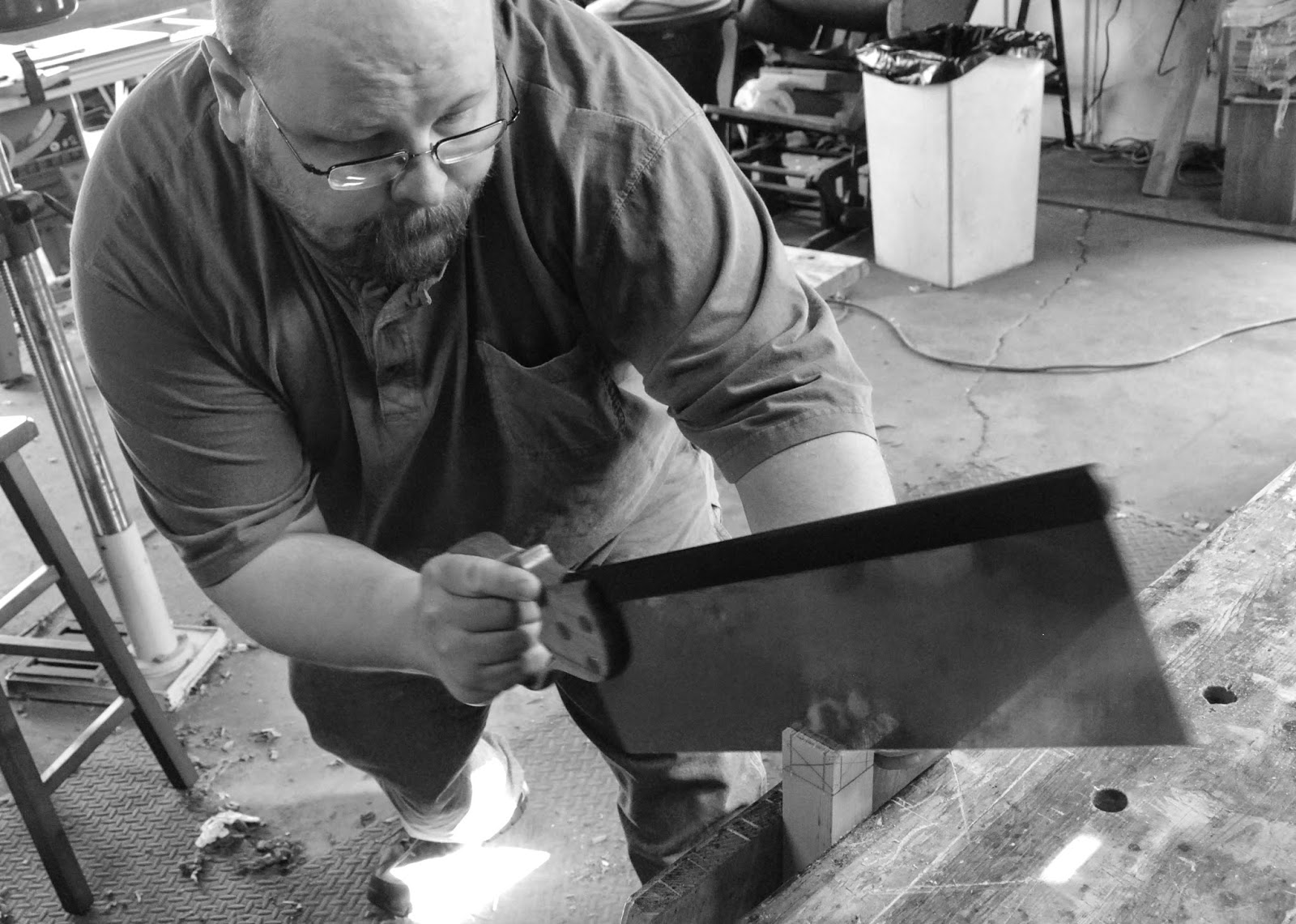 I realize in the opinionated world of woodworking that people will read this and may believe I'm prejudiced, and they may be correct. I have a prejudice towards tools that work extremely well. When I decided to stop playing around and get my hands on a quality back saw choosing Bad Axe Toolworks Saws was easy for several reasons. The least of which, They are made in the same town I live in. I can, and have, dropped in on the gentleman who builds my saws, in his shop, drank a cup of coffee and chewed the fat.

Buy local. Hell yes. If you were in my shoes you'd do the same.

The best reason I continue to choose Bad Axe. All possible prejudice aside. Mark Harrell builds one hell of a saw, and there are many more makers out there, people smarter and more experienced than me, who say the same thing, so I feel more than confident in my opinion.

The first saw I bought from Mark was not the saw I should have started with, but dovetail saws are just so damn sexy I couldn't resist. (I know I have a problem, thankfully I'm married to an understanding woman) I should have started with a carcass or a tenon saw, but no. I feel for it and you will too, I wanted a good dovetail saw more than anything. 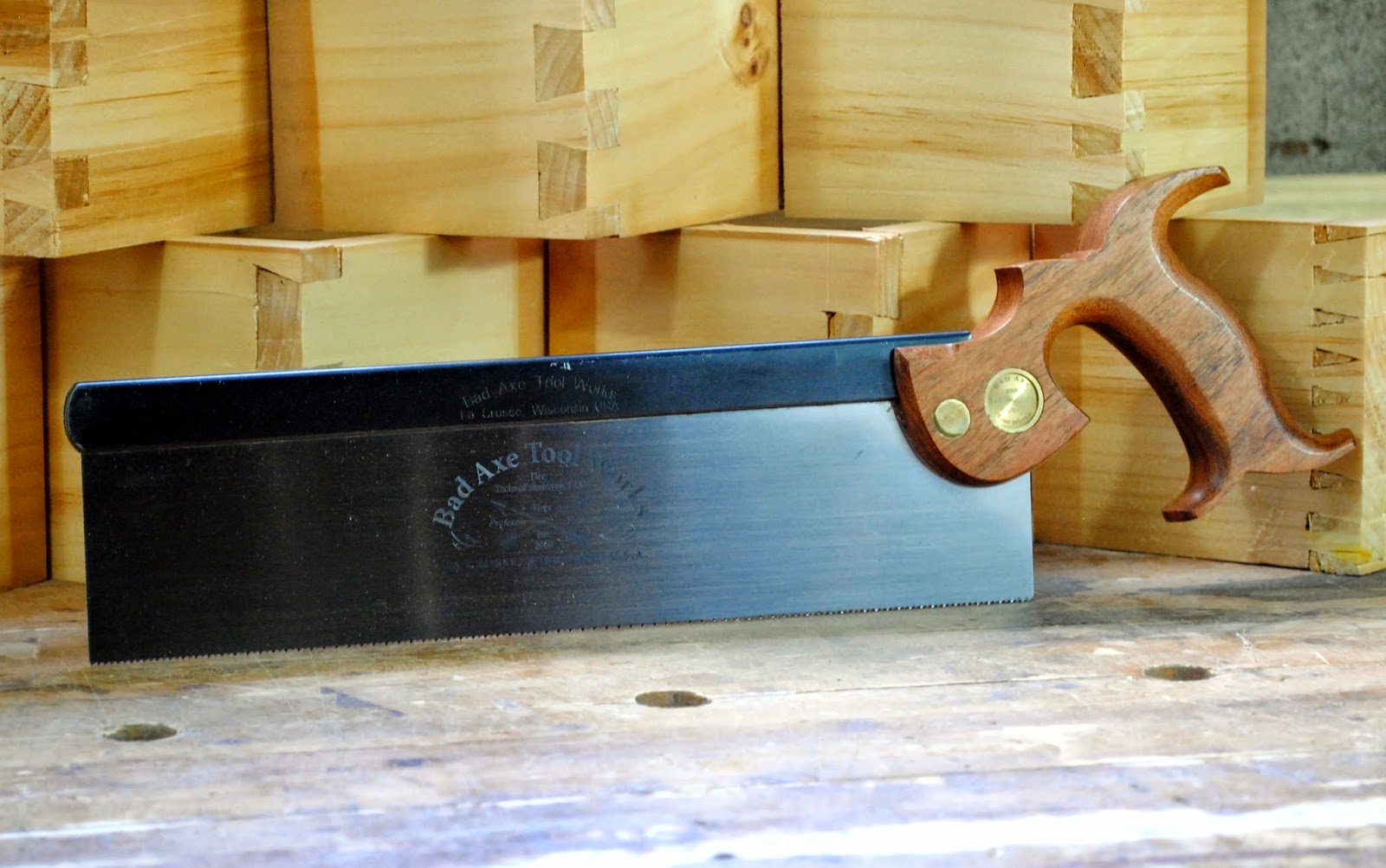 Into my life stepped the Bad Axe 12" hybrid dovetail / small tenon saw with 13 PPI filed rip and open grip Mesquite handle. This was one of the first quality tools I ever bought and it was worth every cent and more. Novel length trilogies about shades of monochrome colors wouldn't begin to cover the feelings I have developed for this saw. It's one of my go to problem solvers when I have worked myself into a corner and need an out. It has never failed me.

Still, in retrospect, I know my first backsaw purchase should have been my third.

I should have bought my carcass saw first. 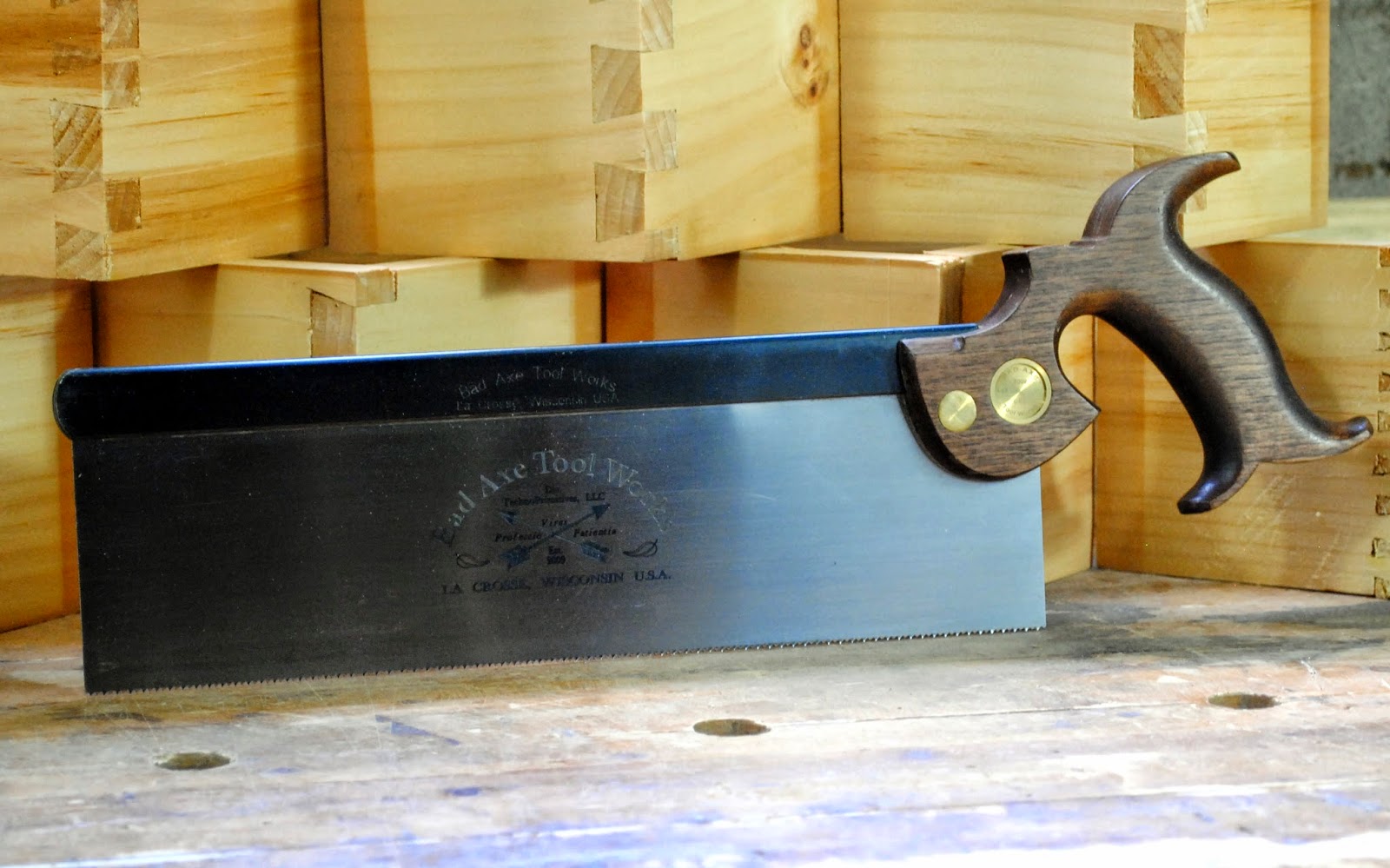 Here's my 12" Bad Axe Tool Works Carcass Saw, with 13 PPI and filed cross cut and an open grip walnut handle. Hands down this saw gets used more than any other in my shop. It cuts parts to final length, cuts tenon shoulders, cuts the sidewalls on sliding dovetail joints, trims pegs, . . . . I could exhaust myself and you listing what I use it for because it's nearly everything. It should have been the first joinery saw I bought, but it's never held that against me.

For my third backsaw, I needed a larger joinery saw and I ran into the conundrum of really wanting a bigger 16" or so tenon saw for both ripping and crosscutting but I didn't have the room for two such saws. I finally decided to fall for what I worried may be a fad and ordered a 16" Bad Axe Tool Works Tenon Saw, with 11 PPI filed hybrid. 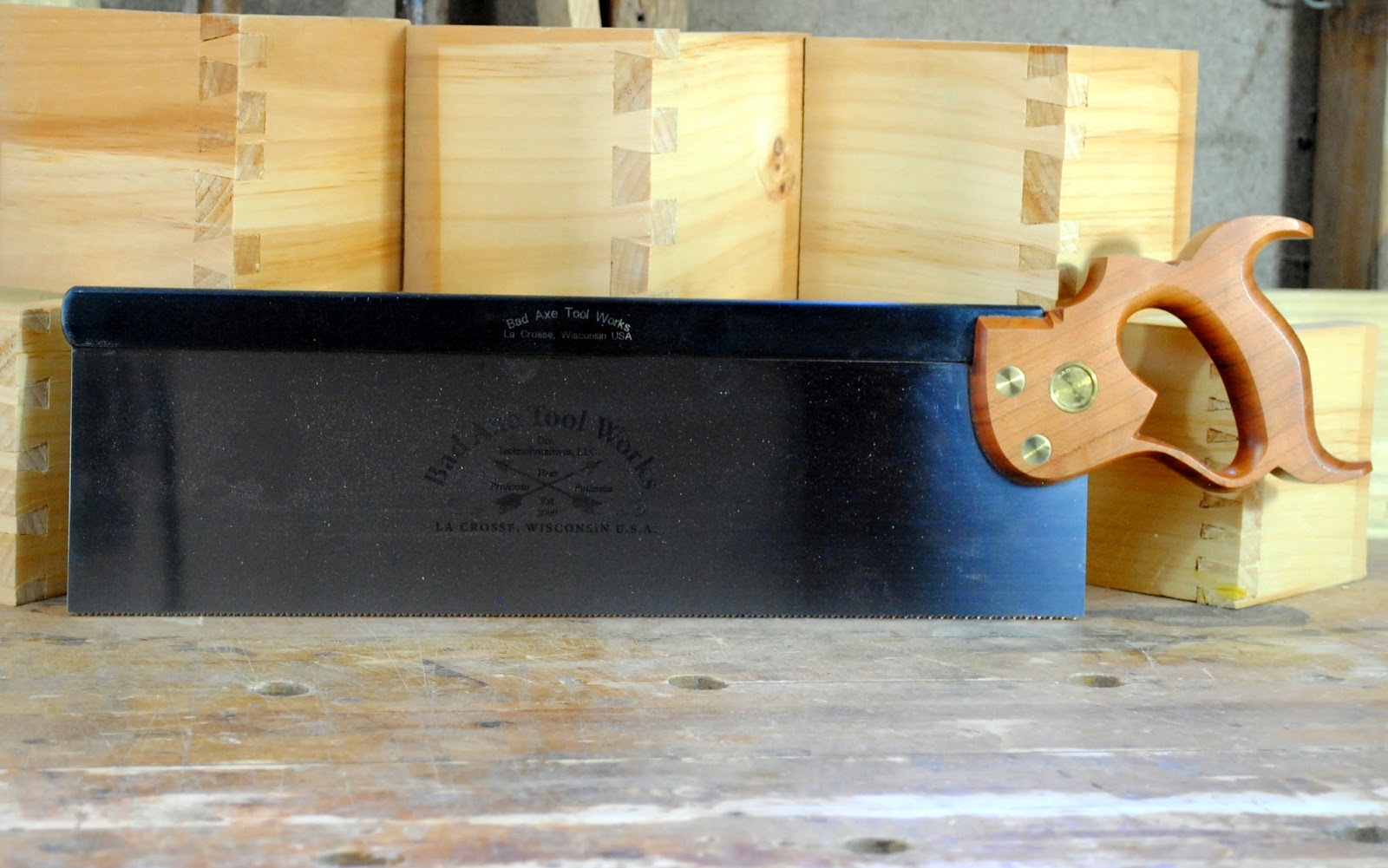 A hybrid filing is like saying the saw is a little country and a little rock and roll. Think a relaxed rip filing, somewhere in the middle of both worlds. While I liked the idea of a multitasking toothline, I was worried about compromise on performance. Using it for more than a year in the real world has made me own up to the fact that the hybrid filing works. The saw does whatever I ask it to.

And I use it for all my bigger joinery tasks, from full size tenon cheeks to cross cutting a wider board to final length. I've even used it for dovetails in thicker stock to great effect.

There is one missing saw from the nest I have yet to acquire.

I don't have anything for very fine work. Dovetails in thin boards, miter cuts on fine mouldings. I do have a small 10" gents saws that I don't like and don't use but it hangs in my tool chest none the less. I need to replace it, and soon, and when I do I know exactly what I'm going to do.

This is a photo of Bad Axe's 10" dovetail saw. It's a fine toothed wonder, I wrote a review of it after Mark let me try out a prototype a few years ago. (You can read it HERE) But I have a special plan when I order it.

Mark and other saw-wrights like him will be happy to make you the saw you want to the specs you want. Just ask them. Within reason it's their bread and butter. But there is another way to look at things. I know from talking with Mark, and like I said I'm sure others making saws for a living are the same, that he knows more about saws and everything encompassing and related to their form, function, performance, and history than I could or would ever want to, and I would be a fool to not take advantage of his studied expertise.

It is one thing to walk into a master chef's restaurant and order a  porterhouse steak, medium rare, with a baked potato and garden salad. You'll  probably get just what you asked for and it will be great. But if you're adventurous and you trust the chef, you'll walk in and say, "Chef, I'm hungry for a great meal, I'd like you to surprise me. Cook whatever you like and take me on an adventure." and what comes out of the kitchen will most likely be an experience like no other.

That is exactly what I intend to do when I can afford my final Back Saw purchase from Mark. Walk in and say, "Mark, I need a saw for fine work, please build the saw you'd want to use yourself. I trust you."

I'm thinking when it happens, if I can convince Mark to do it, that saw may quickly become my new favorite.