Buried Below The Skin. 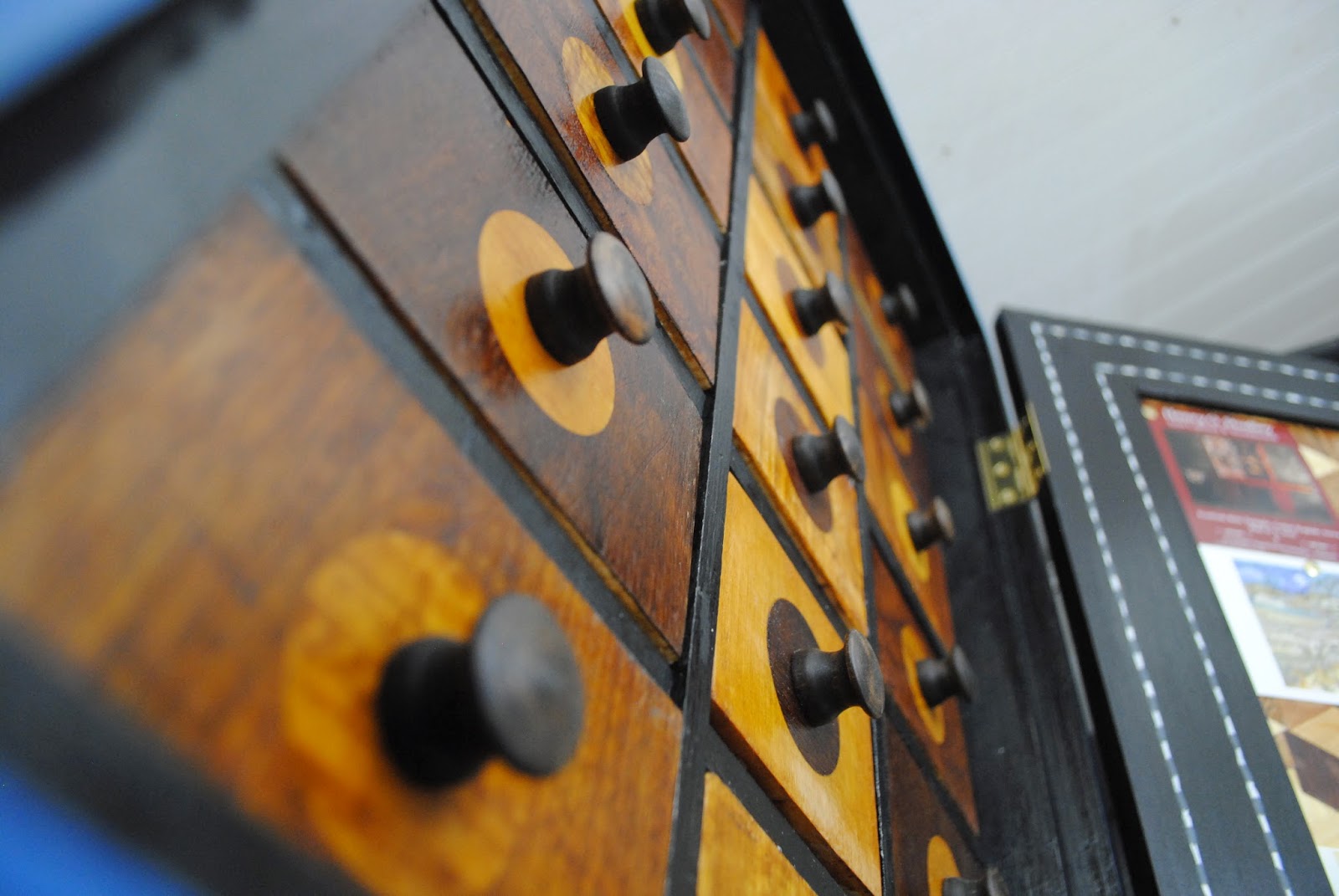 My take on the Roy Underhill / Chris Schwarz nail cabinet is done and hanging on the wall of the winter shop. The ending of a project is always a curious time. You're simply too close to be objective, Some things you're proud of and some things you would like to take a lit blowtorch to.

Often after perspective settles in those things are not as sharp in either direction and some time spent with a piece lets you mellow as it grows into it's old skin.

At this moment, I can't say I really like it. It's over the top and folk arty in a ballistically bombastic way. Once I started down the path I figured in for a penny, in for a pound and pushed it as far as I could. That exploration I'm a little proud of, with or without the technical misses. It's the technical misses that always kill me in the end. 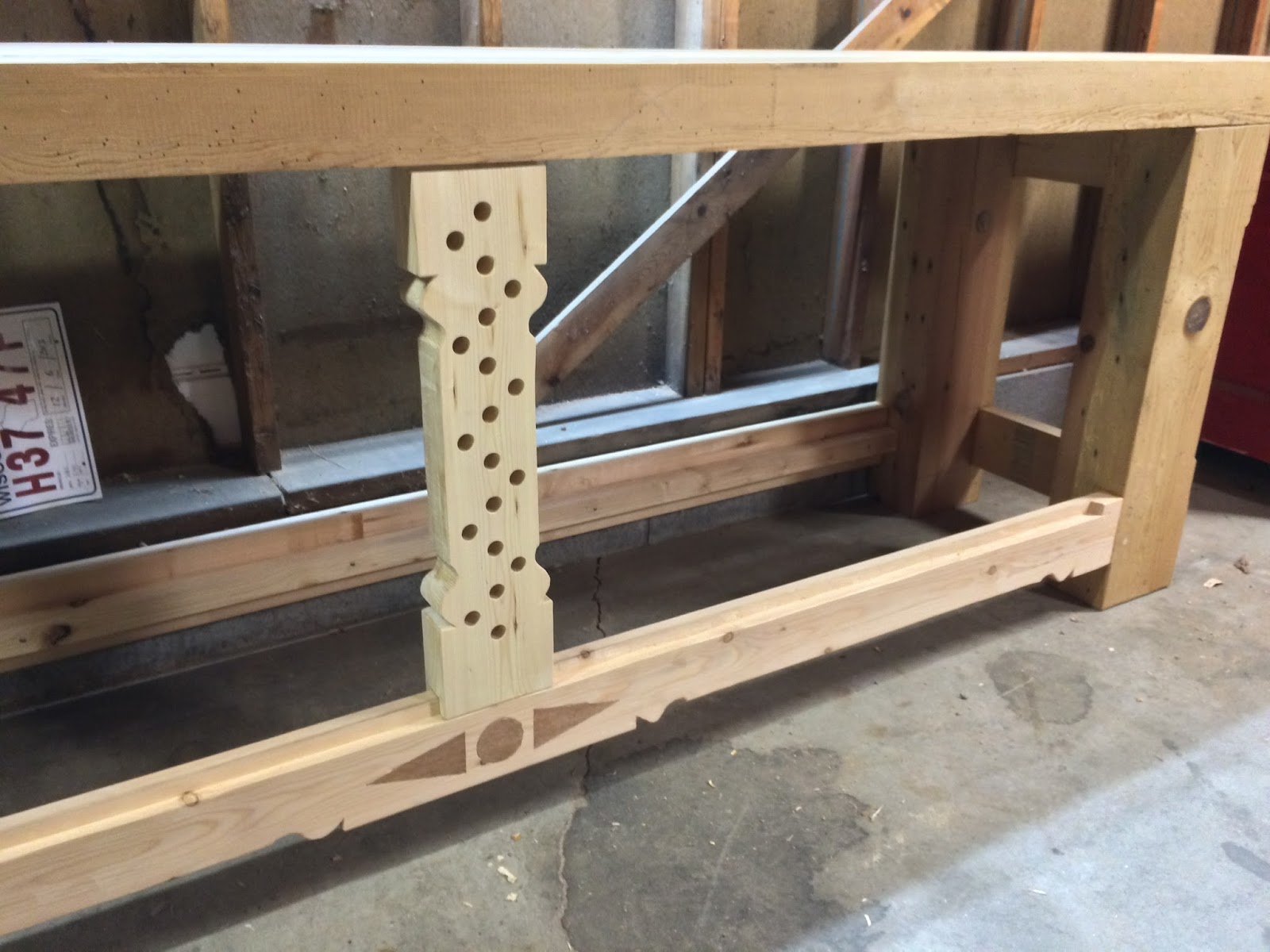 When I built my new work bench this past autumn I decided to add a little bit of flair with a small amount of dot and dart inlay veneer. I decided to repeat this on the nail cabinet. 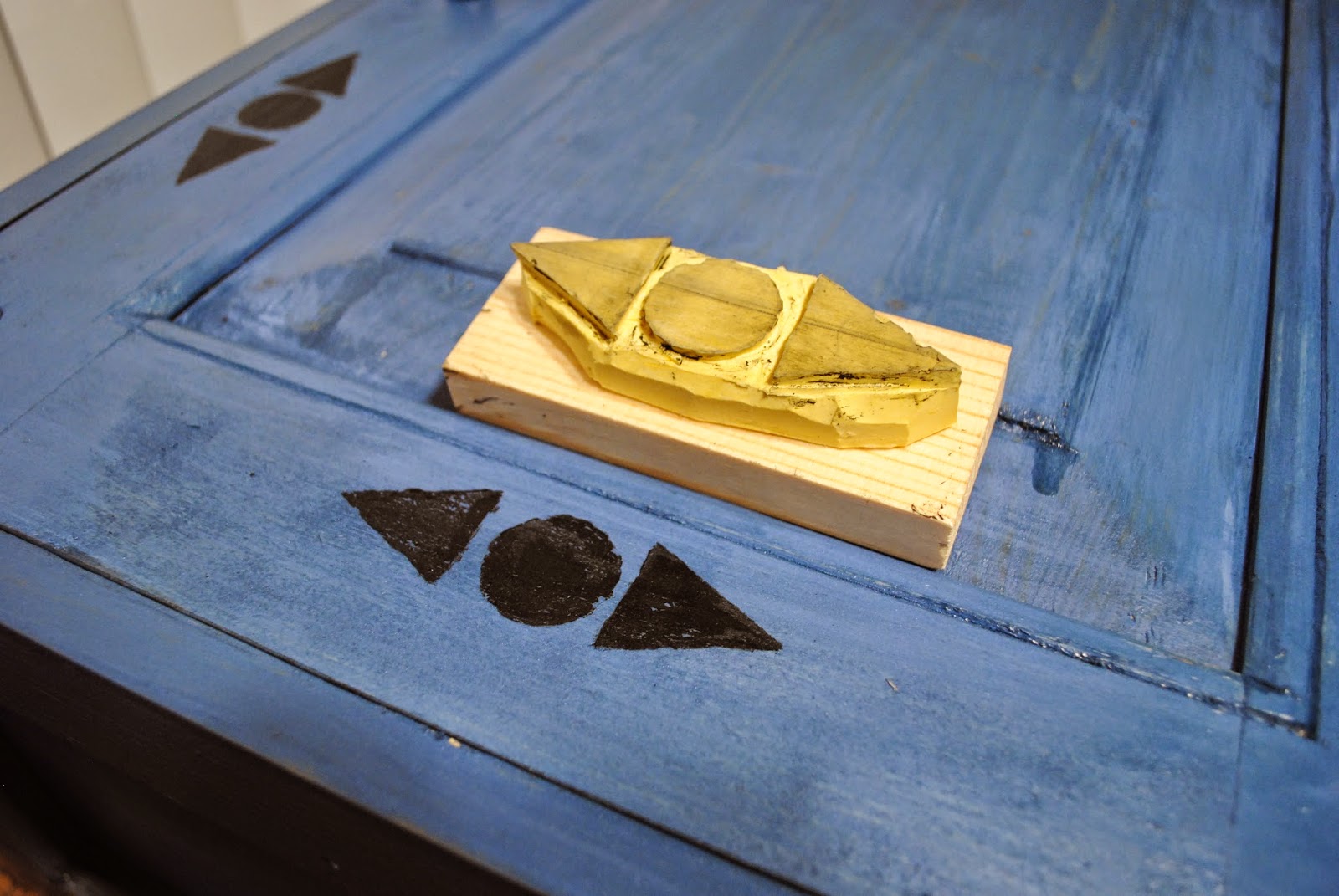 I wasn't interested in inlaying into the outside of the cabinet. I had plans to milk paint and keep the outside a little rustic to contrast the veneer and parquetry work on the inside. So painting the dot and dart seemed appropriate. That leaves two options for consistency: stencil or stamping. I chose stamping.

I used some two part silicone mold making material to build a flat block and some sharp razors to relieve the simple design from the blocks. I brushed the stamp with black tempera and made the marks around the cabinet. Working back in with a brush to crisp up the lines and cover big voids. 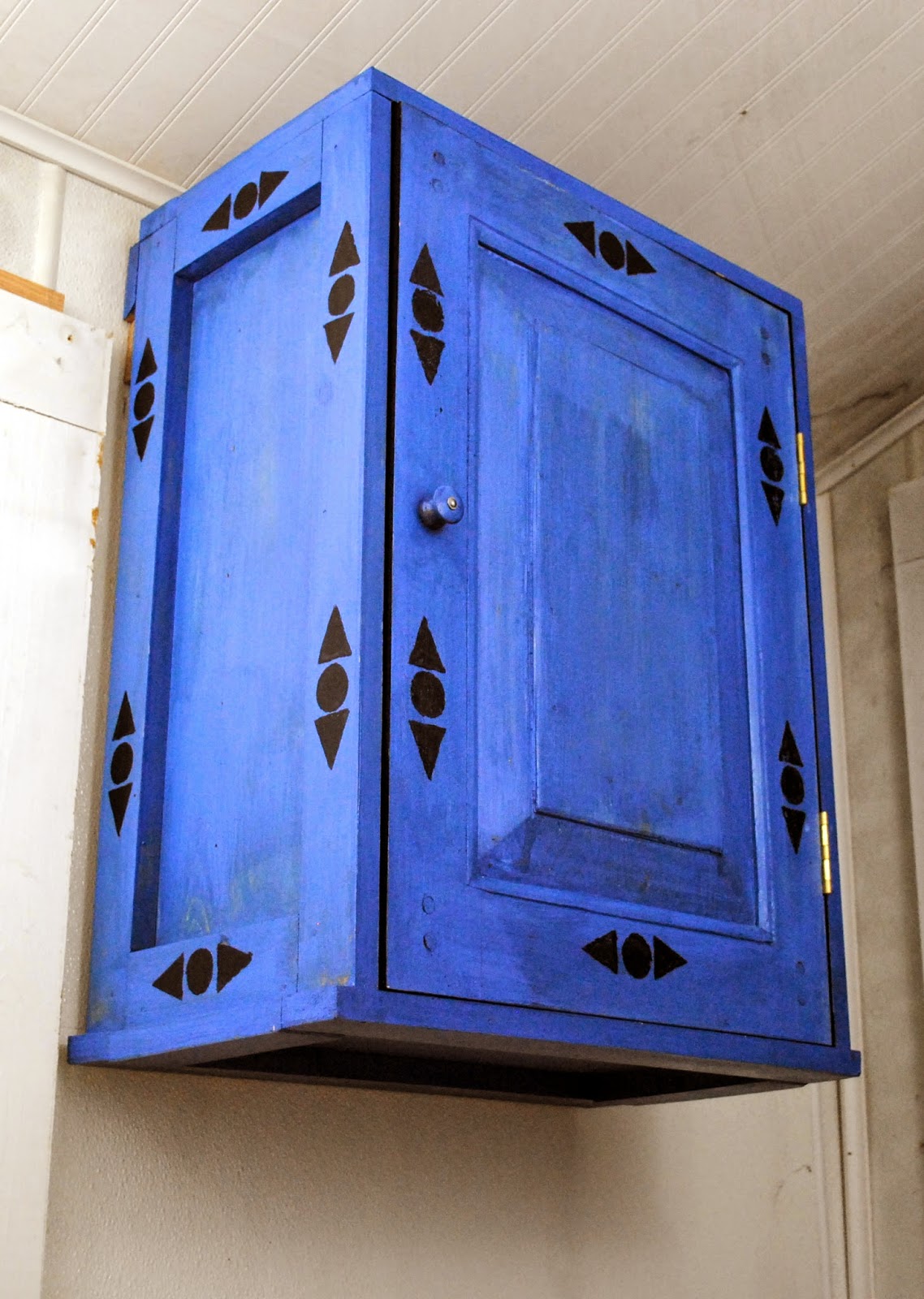 The effect in the end worked out just like I wanted. Once the blue milk paint and black stamps had a couple coats of shellac the look was very nice. I will have to repeat this finish again. 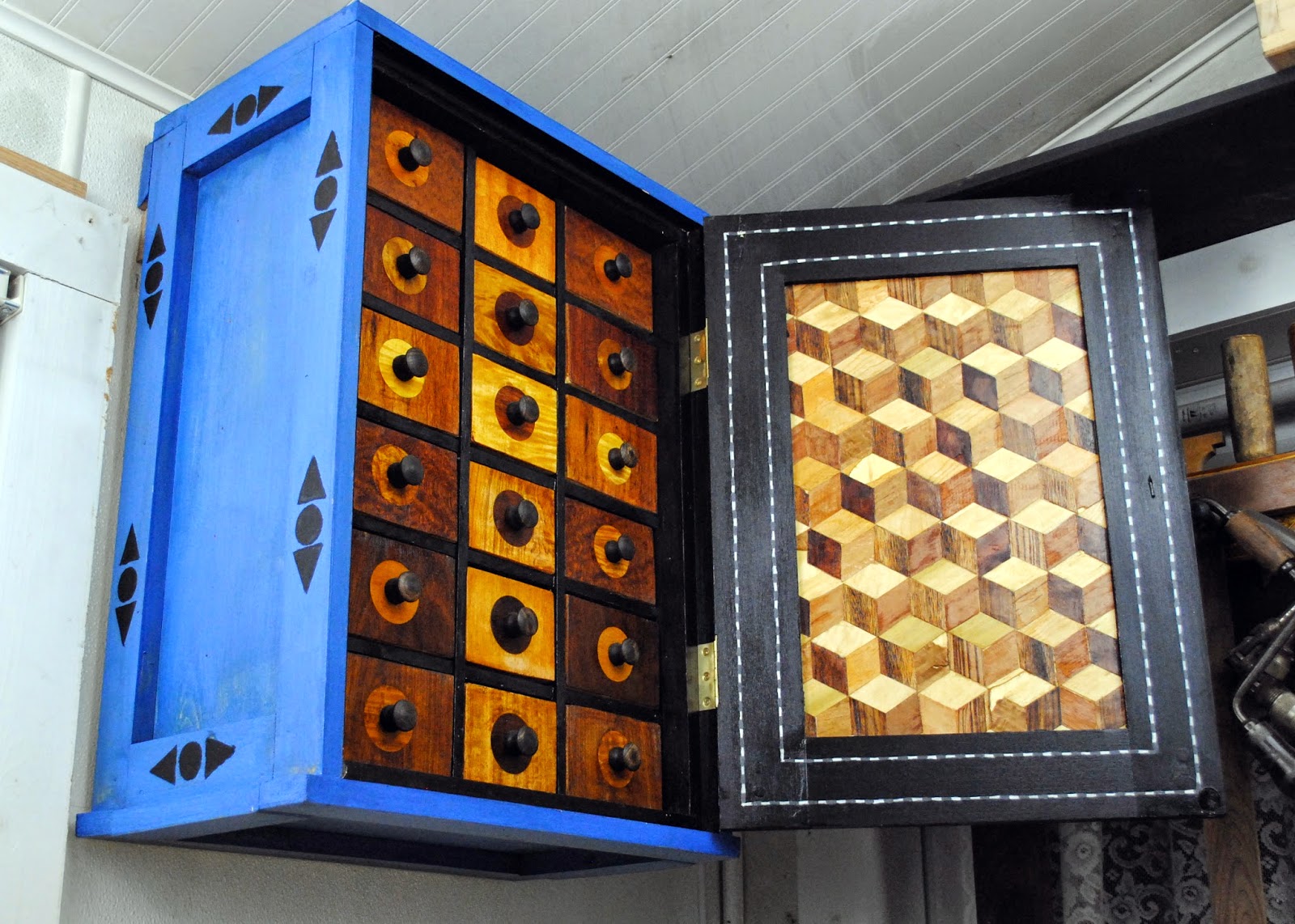 The beginning concept I worked from on this cabinet was to have a stark difference from the outside of the cabinet to the inside. I have a thing about looking inside boxes and behind doors. Museums drive me a little nuts in the fact I can't get a look on the inside of some beautiful work. I like to see the details go all the way through and live more than skin deep. 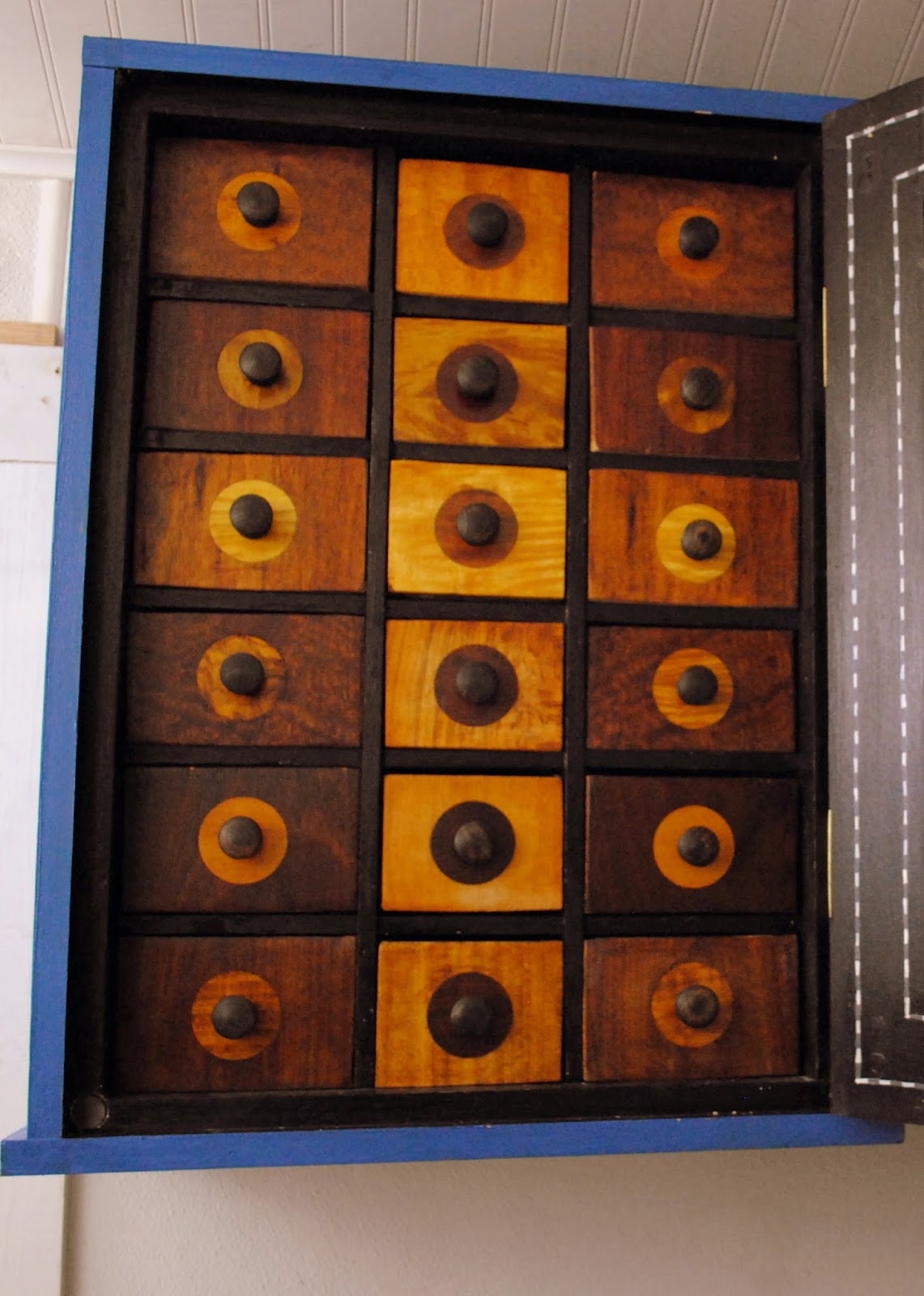 The veneer work on the drawer fronts is satisfying. There are technical misses and mistakes but those things are to be somewhat expected when exploring a new skill set. In the end I don't like the knobs and I may look to replace them with small porcelain pulls at some point in the future. 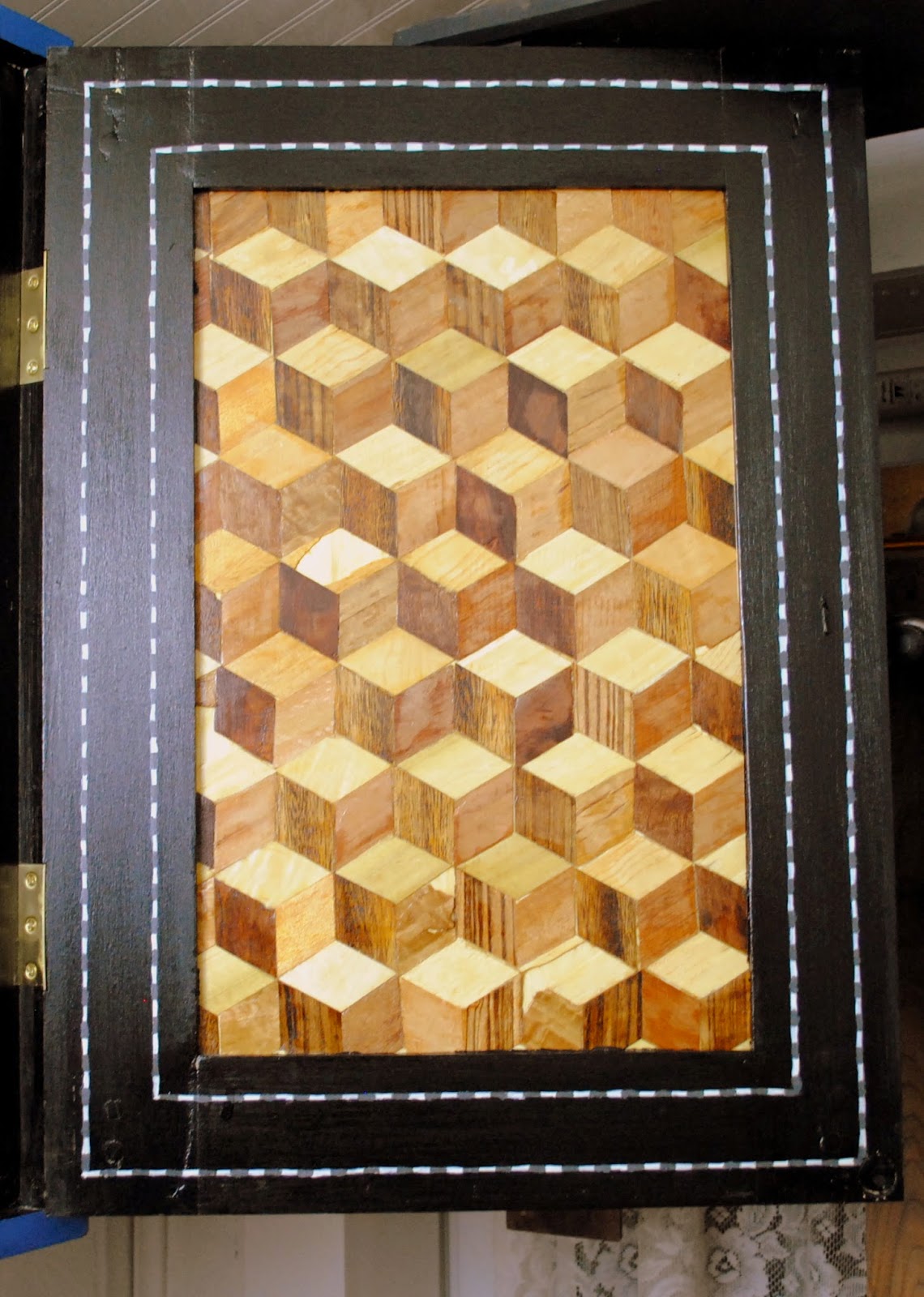 The parquetry panel in the door was acceptable to me as a first time exploration, mostly on my own with my own assumptions and mistakes. A close look makes some of the problems very evident. I could have dove in to trying to repair these things and mired myself down. Instead I chose to accept how it turned out and move forward.

Several people more experienced than I were kind enough to offer critique and advise on where I went wrong and what I can do to improve. Including a treasured note and email exchange from W. Patrick Edwards, whose work I love. I'm looking forward to the day I win the lottery and can afford to spend time taking classes from the modern masters I admire.

The inlay banding around the panel is also paint. It was a chance to practice some faux techniques used in grain painting. I have a piece I want to build that has these banding techniques and I wanted to give it a shot here. From two feet away it looks great, closer inspection not as much. 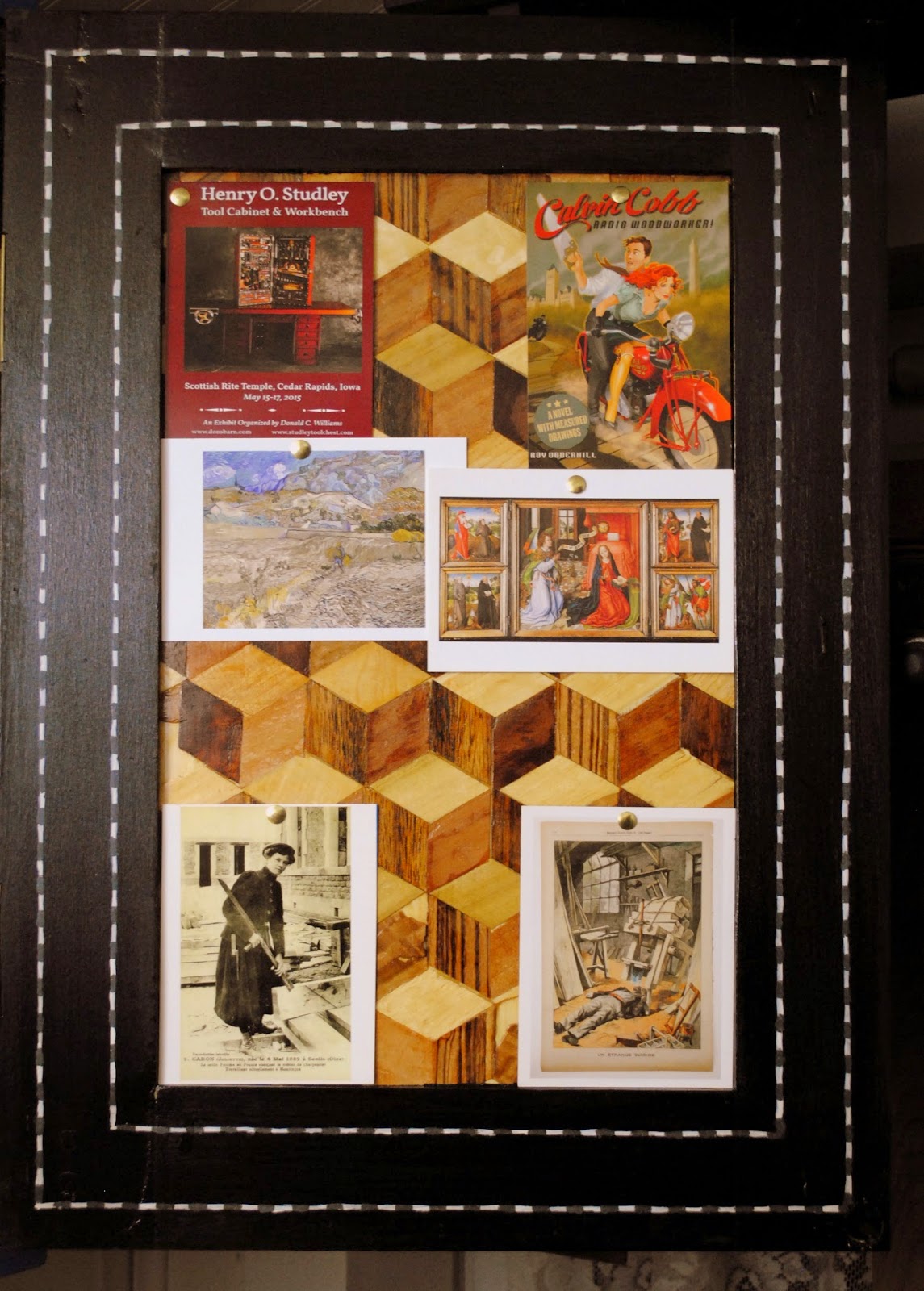 In the end I have to thank Chris Schwarz. When he saw my build on instagram he offered to send some Lost Art Press postcards to adorn the inside. I added a couple other post cards of my own to the mix and I'll keep looking myself for things to add in the future.

So this project is done, on the wall and in use. My wife threatens to steal it for inside the house so I have to fill it with nails, screws, and other hardware quickly so it's too heavy to lift off the wall.